Quite a few changes happened between those two publications, but my favourite is the change to How Firm a Foundation, hymn #66 in the brown 1948 edition:


I have never, personally, sung it this way since the 1985 book was published before I could speak so I grew up singing:

But I've heard many in my parents' generation fondly remember irreverently, if unintentionally, cracking up over "Yoo-hoo unto Jesus!" Thus, I'm sure, the change.

With 30+ years of practice under my belt, I've gotten fairly good at behaving reverently when the occasion calls for it. I admit that I went through that awkward stage where I'd twitter* with my Sunday School peers should anyone ever be called on to read a verse of scripture containing the words "ass" or "hell" or "damnation." And I probably was a wiggly Sunbeam. But I got through all of that and now I'm pretty good at behaving reverently when I should be.

Tonight I was taking a turn reading aloud, in 2 Nephi, chapter 24 (compare Isaiah 14): "The whole earth is at rest, and is quiet; they break forth into singing," I read. "Yea, the fir trees rejoice at thee, and also the cedars of Lebanon, saying: Since thou art laid down no feller is come..."

And I started laughing so hard Andrew had to take over for me.

I know that this is referring to a feller of trees, a woodsman. I get that. But, guys, the more common usage, the one that overpowered my mind was the "nonstandard spelling of fellow," reflecting the nonstandard pronunciation common in "various dialects" feller.

And I just could not even. 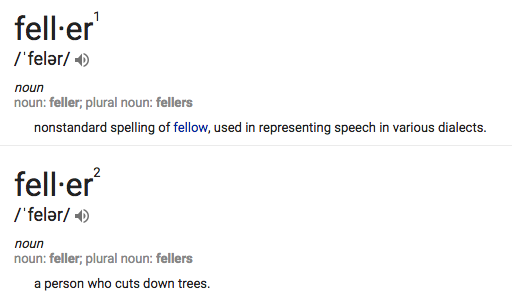 * Dear younger-than-my-generation readers, twitter is not only a social media platform; it's a bonafide word. I did not have a cell phone at the age of this anecdote and Twitter hadn't been invented. Yes, for real. You can close your mouth now.
Posted by Nancy at 1:35 AM