First snow of the season

Alexander and I were the first ones awake this morning, which means we got to be the first ones to see the first good snowfall of the season. Technically it already snowed here once—on November 4th, fast Sunday, when Karen was still here—but it melted before we got out of church so that hardly counts. This morning's snowfall was generous enough that the kids could hardly eat breakfast for wanting to go outside so badly.

So we bundled up and headed outside. Alexander enjoyed the snow much more than he did his first romp in the snow:

Alexander has done quite a bit of growing up this year, though he still wears that little sleep sac to bed.

Looking at the timing of these pictures is giving me a little bit of anxiety about how long winter can last, but I'll try to push that aside for now because snow can be fun (in moderation).

Alexander thought snow was fascinating and was even trying to catch snowflakes on his mittens as they floated down from the sky, which was rather adorable. 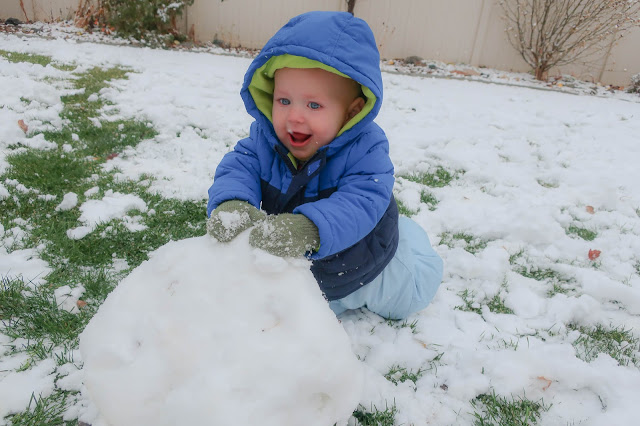 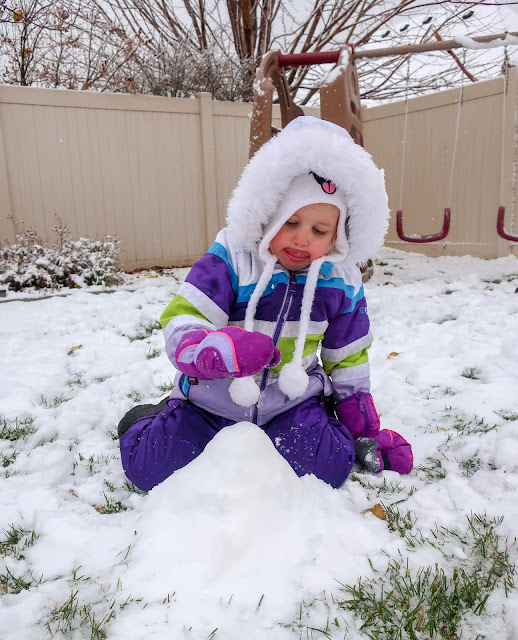 She also enjoyed the snow a lot more than she ever seemed to enjoy it last year, though we'll see how that plays out over the course of the season because we're getting our first "real" snow a full month before it snowed last year and she may well get sick of the stuff. But today she liked it: 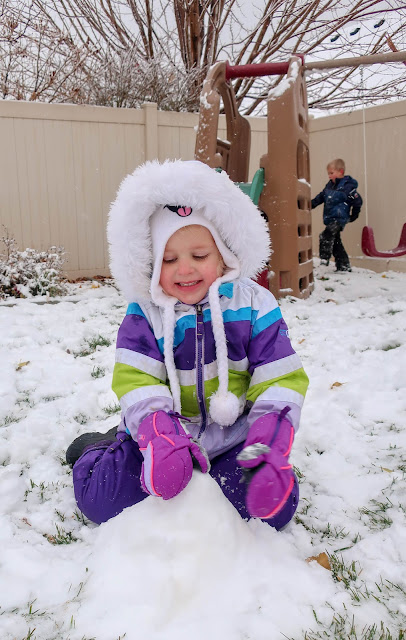 Rachel and Miriam built this snowman all by themselves (I only had to help lift the second snowball onto the first): 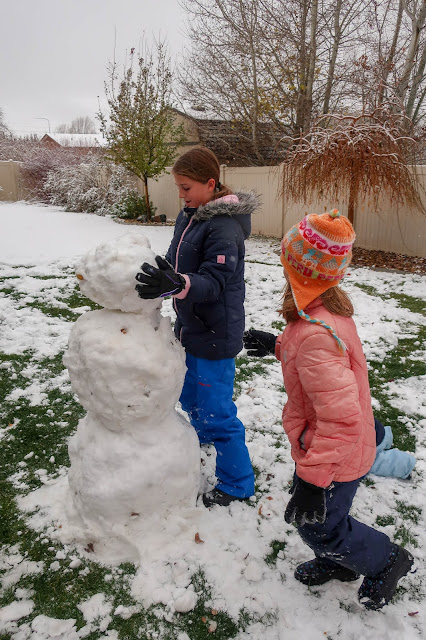 Benjamin had fun with our extra slippery slide: 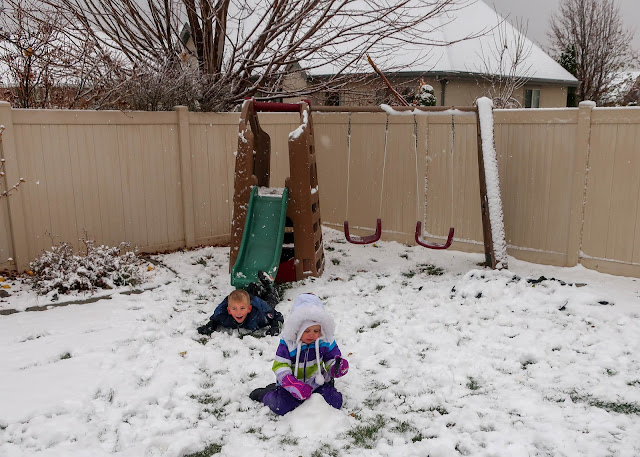 Alexander surprised me by crawling around a bit. I wasn't sure he was going to even attempt such a feat because he sat in the same spot for several minutes wondering what on earth (literally): 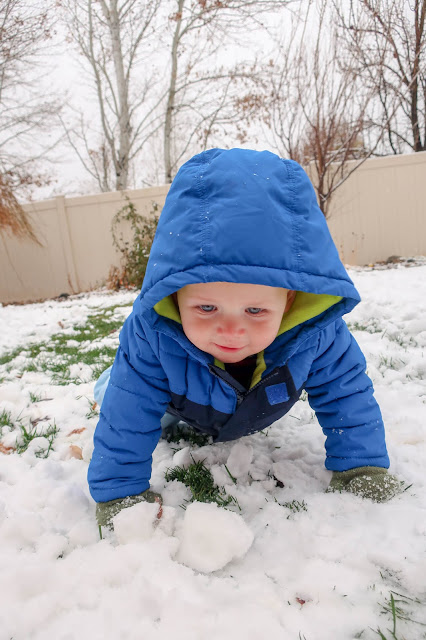 Here are the kids hanging out with their snowman (Alexander did not want to stop playing in the snow for a picture (he threw a similar fit when I took him out of the bathtub this evening)) but the rest of the kids look happy: 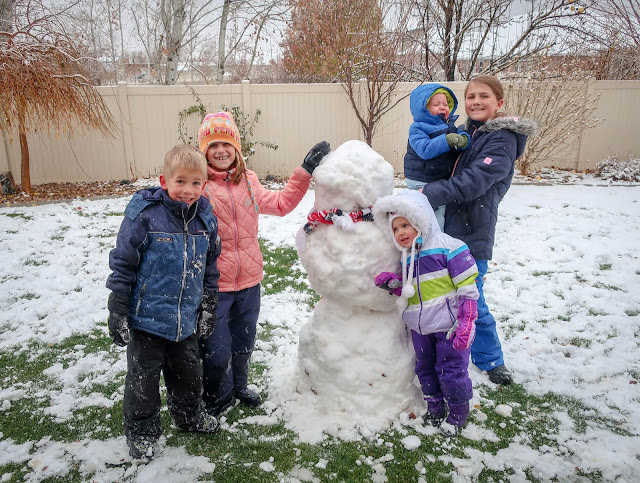 Soon the kids decided they wanted to go sledding so off we tromped to what we call "the train park," which has a good sledding hill. Grandpa came along so that he could take the baby home (after he had a turn going down the hill with Mommy, which he enjoyed thoroughly). 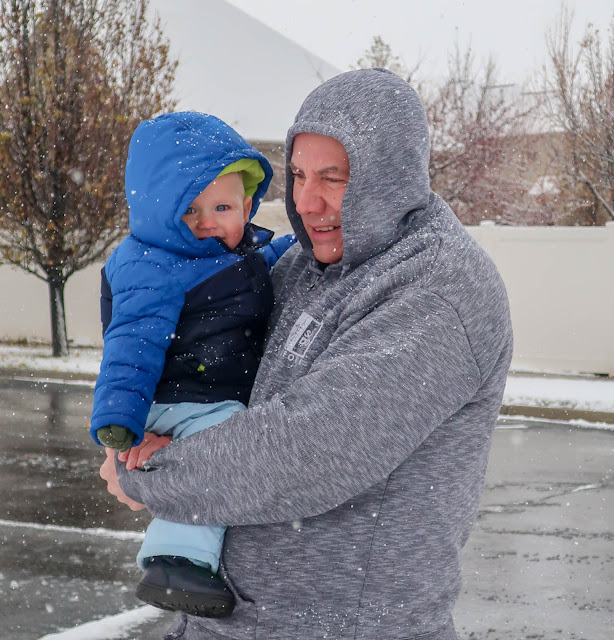 I didn't expect Zoë to last as long as she did. She had a blast though. She followed her sisters over to the steepest part of the hill and, ignoring my pleas to try out the bunny hill first, hopped on a sled and went down like a pro. Then she stomped up the hill with her sled in tow and did it again and again and again, which was quite the change from last year. 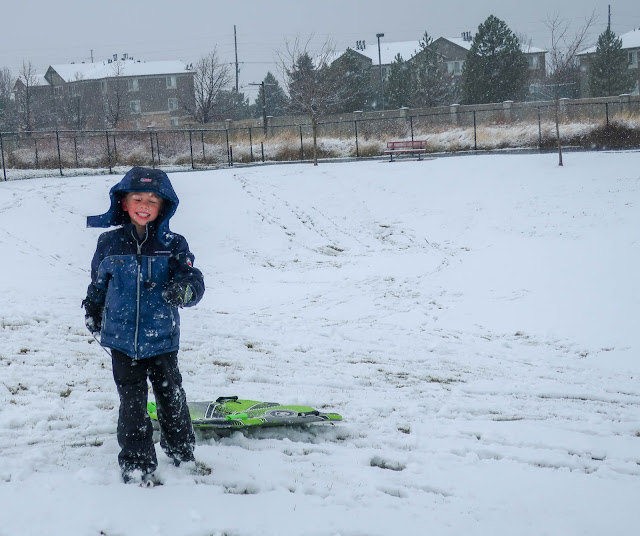 Benjamin, naturally, enjoyed himself immensely. He would go down the hill and dramatically bail off his sled at the end of his run. 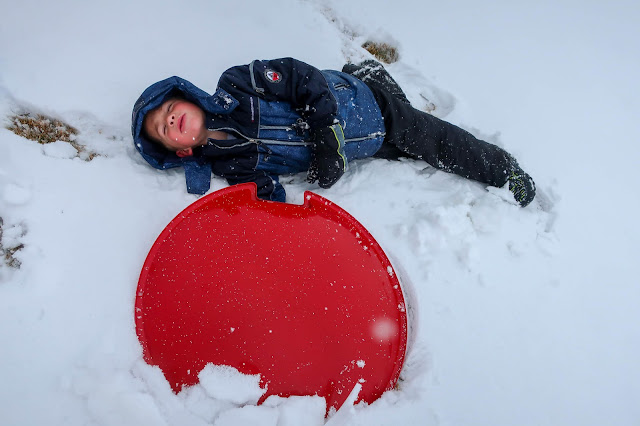 Miriam and Rachel had fun going down in ever-increasingly daredevilish positions—backwards, upside down, spinning in circles, in "bow" position... 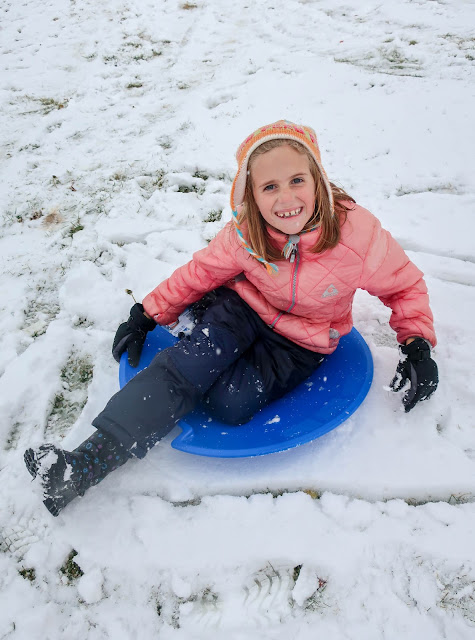 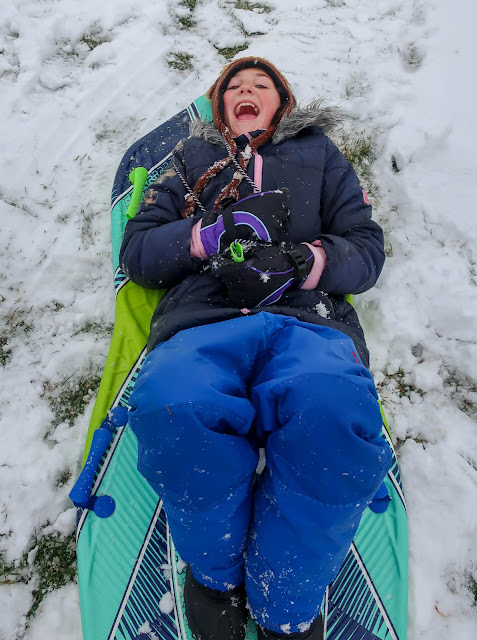 Check out Miriam going down the hill here:

When Zoë got started getting tired she began mooching rides with other people, who would then either pull her up the hill on the big sled or, at the very least, carry the sled up so all she had to do was get herself up the hill.

Here we are about to go down the hill together (not the best selfie moment for her): 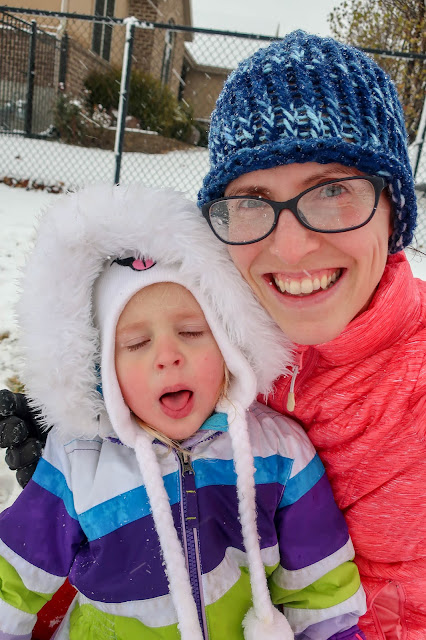 And here she is being pulled up the hill by yours truly: 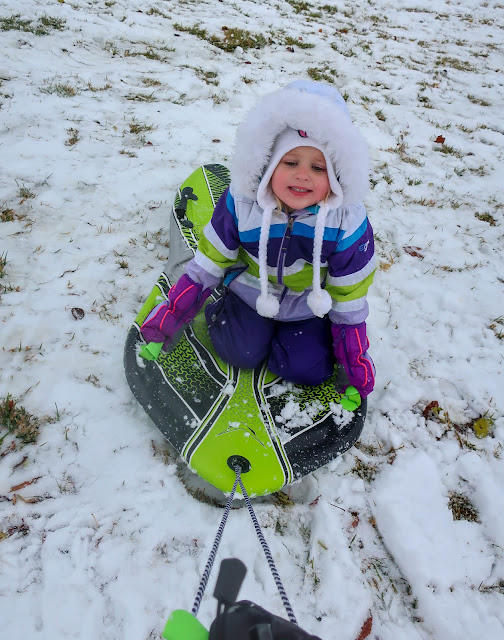 Here she is before heading down the hill with Rachel: 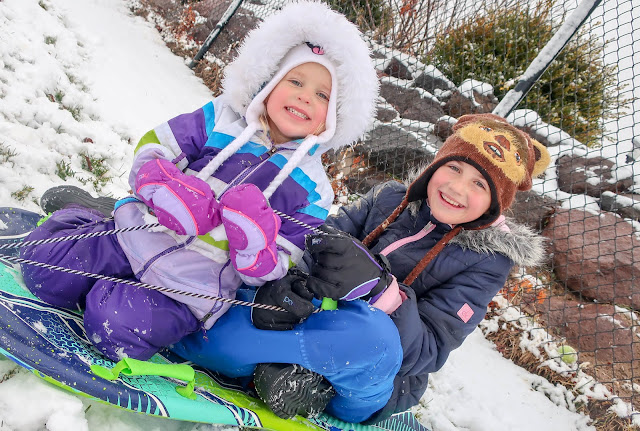 She was getting pretty brave near the end of our time on the hill and was going down standing up (holding onto Rachel's shoulders):

Miriam was actually the first of the older four to want to go home, but we didn't leave until Zoë announced she needed to go potty (which shouldn't be confused with wanting to leave because Zoë did not want to leave, but I made her because she was doing a pretty wild potty dance). We left Rachel and Benjamin to slip and slide to their hearts' delight (they returned home within an hour of the rest of us).
Posted by Nancy at 1:12 AM