We finally got a decent amount of snow—somewhere between eight and ten inches overnight (depends on where you step)! And, as luck would have it, it's President's Day (or, if you're me, Family Day) so there was no school today, which meant we got to enjoy the day playing in the snow together.

As much as I complained about missing school every stinking time it snowed when we lived in North Carolina, I do think that having a day (a day, mind you, one solitary day; not wait-until-there-is-no-snow-anywhere-before-going-back-to-school number of days (I swear this particular snowfall would have been a good two weeks' worth of snow days in North Carolina)) to frolic in freshly fallen snow is a wonderful thing. It would have been a real shame if the kids had been in school all day, pining to get out into the snow!

So one day off was nice, but I'm super glad they'll be going to school tomorrow.

Here are the kids playing out on the swing set together: 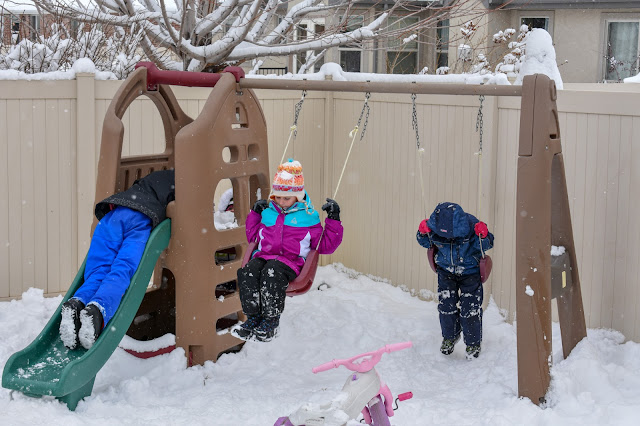 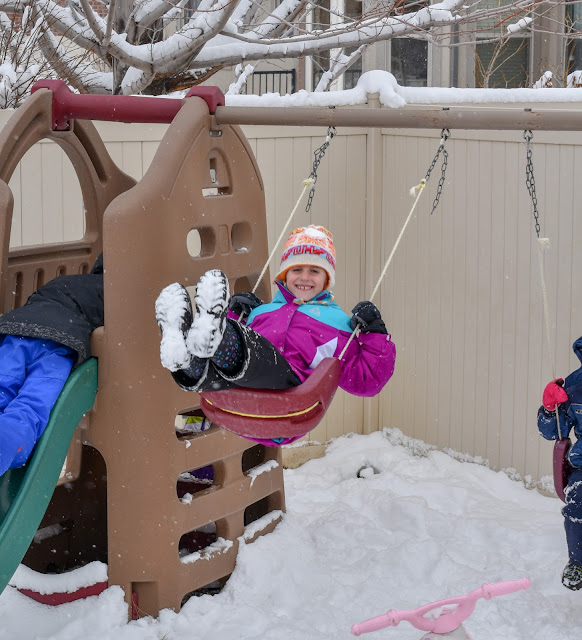 And sitting in the snow: 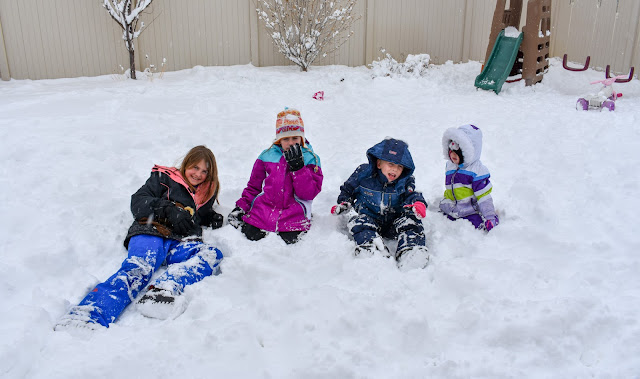 And here's Zo lying in the snow: 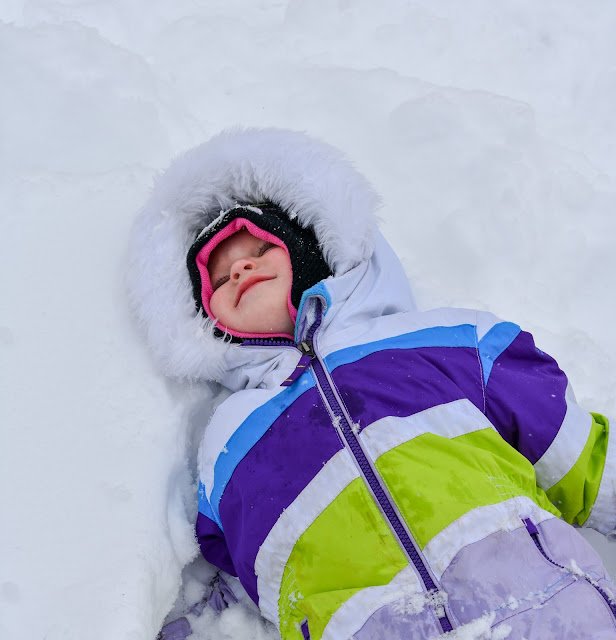 And here she is again, this time eating snow off of Grandma's picnic table (that Grandma made with her own two hands): 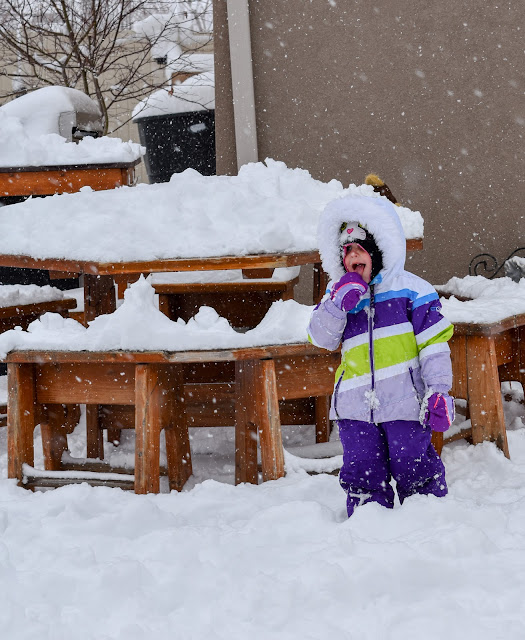 I decided that we should probably even bundle Alexander up to get a taste of his first snow (every other snow this season he's been tucked safely away in his baby wrap, zipped up in Mommy's coat, completely unaware of the world): 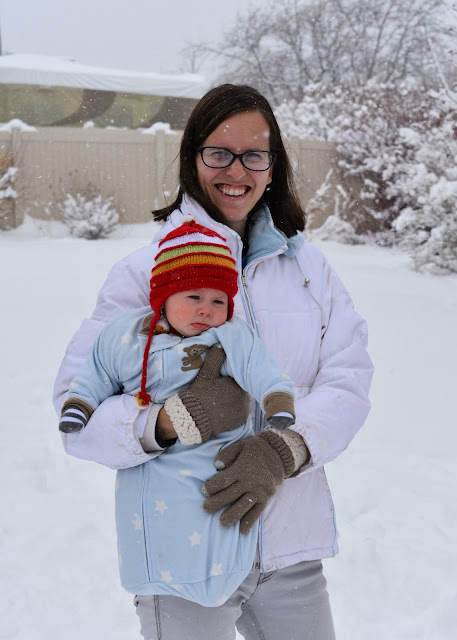 He was a little bit pouty so I'm not sure he loved the snow...but here he is in a little snow fort the kids made anyway (can you even tell he's propped up against a wall of snow? I dunno...but trust me, he is): 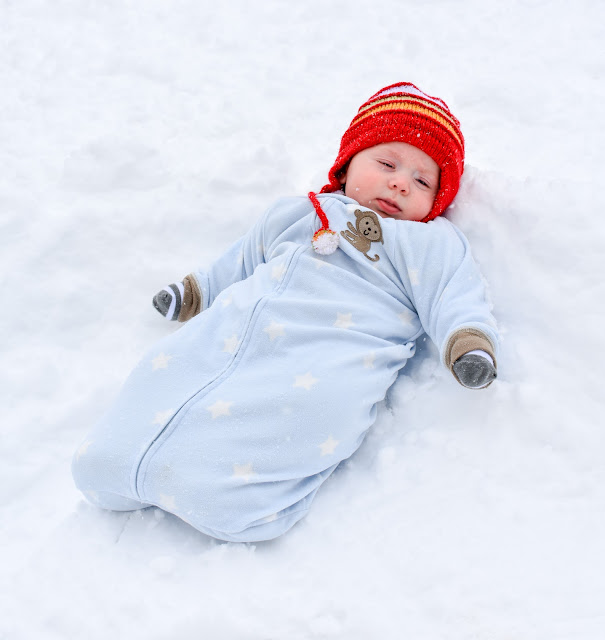 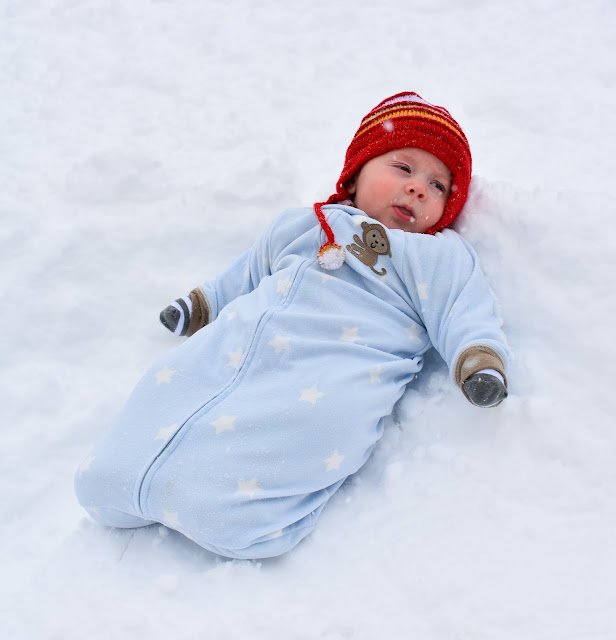 And here he is standing in the snow: 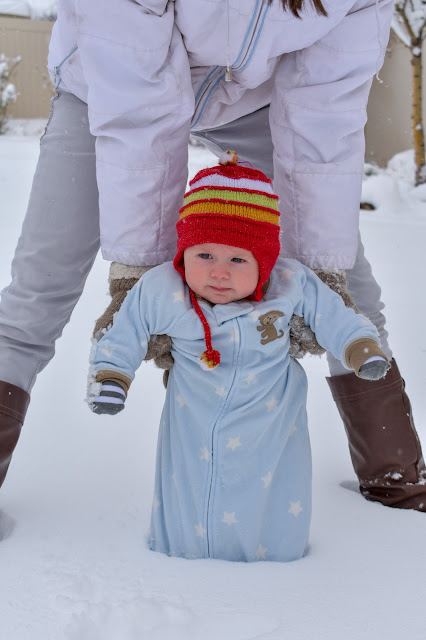 With a little help from yours truly: 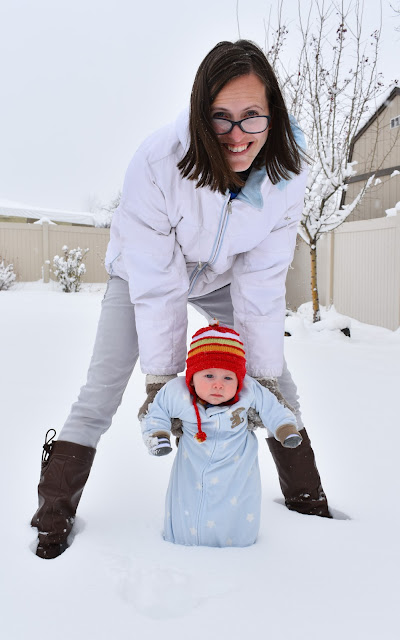 And here his is making his first snow angel (he's totally into it, obviously): 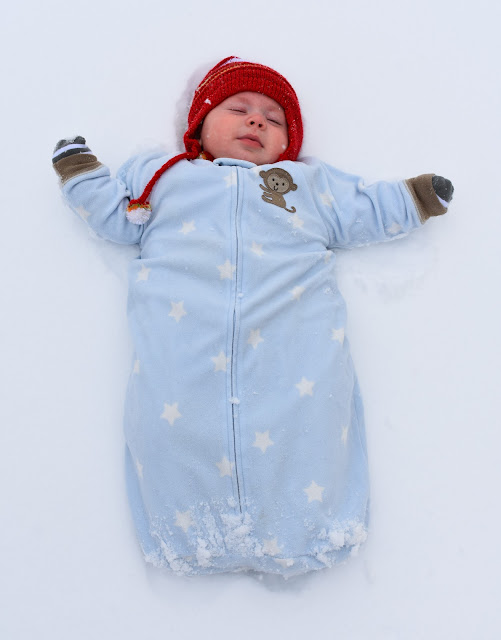 Making snow angels looked like so much fun that all the kids decided to join him (and we didn't even have to coax them or anything (just kidding; there was a whole lot of coaxing going on)):

We made sure the four older kids were properly outfitted for a snowy winter this year (and then it hardly even snowed; silly weather) but we didn't really bother about finding snow things for Alexander because, well, he doesn't really care about playing in the snow. So he got the North Carolina treatment...and I stuffed him into a grocery bag to keep him warm and dry: 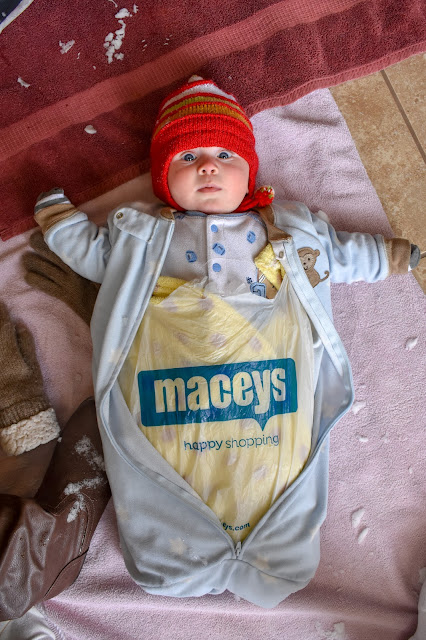 He's got on a pair of cotton pyjamas, with socks on his feet and hands, then he's got on a pair of thick fleece footie jammies, and then I wrapped him in a blanket, put on a grocery bag like a pair of overalls (his arms are through the handles), and zipped him into a little sleep sac. Totally legit winter wear!

He didn't stay out too long. I brought him inside to nurse, put him down for a nap, and then took the kids to the sledding hill (knowing that Zoë wouldn't be staying long). I took Zoë down a couple of times and then let the kids muddle through trying to share three sleds between four kids.

Miriam got knocked off when she tried going down with Benjamin: 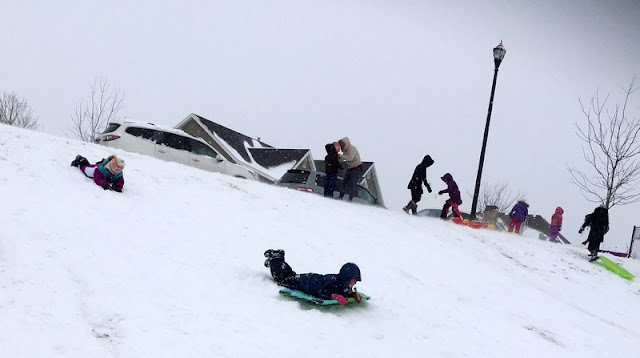 Over and over, again and again: 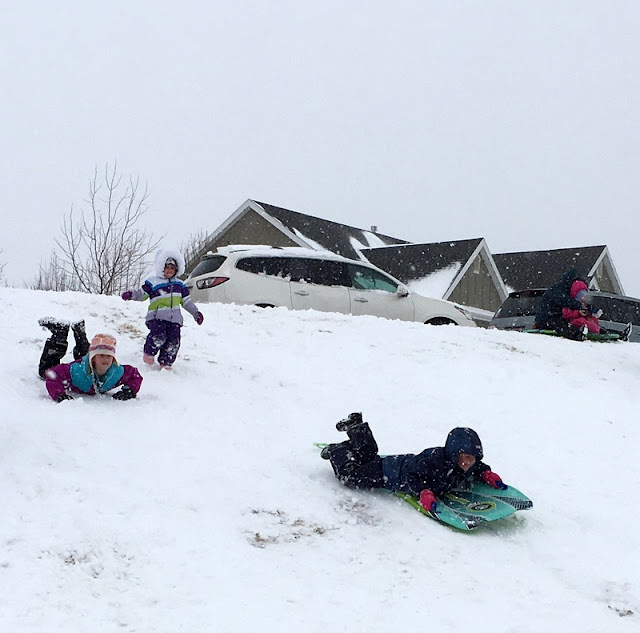 It honestly can't be that hard to share a sled that's clearly designed to hold two people, right? Wrong. Because then the kids started trying to take Zoë down, but I couldn't get them to sit down and straddle the poor child. Instead they kept going down on the knees, which was a disaster—Zoë kept slipping off the front of the slide (and there's far less room on the slide when everyone's kneeling).

This was Zoë's worst fall (Rachel and her friend Kate went right over top of her, mashing her into the snow):

She asked to go home after that (though she didn't cry about it at all; she just picked herself up and then plopped into Rachel's lap for a snuggle): Oh, here's one last picture of Miriam going down on one of the round sleds: 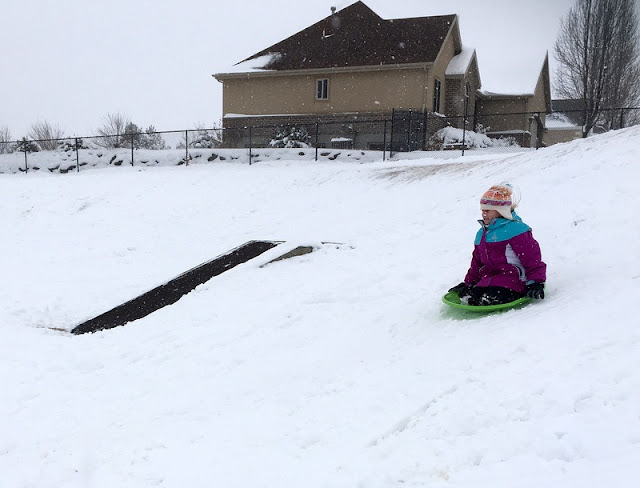 Zoë and I slowly made our way home. She was having trouble walking through the deep snow so I carried her through that and made her walk where the sidewalks had been cleared (on the way to the hill Rachel pulled Zoë on one sled and I pulled Benjamin on the other while Miriam trudged behind carrying the round sled). When we got home Zoë went inside to warm up and I started shovelling the driveway.

It doesn't look so bad around the car, but shovelling this thick, heavy snow was quite the feat! 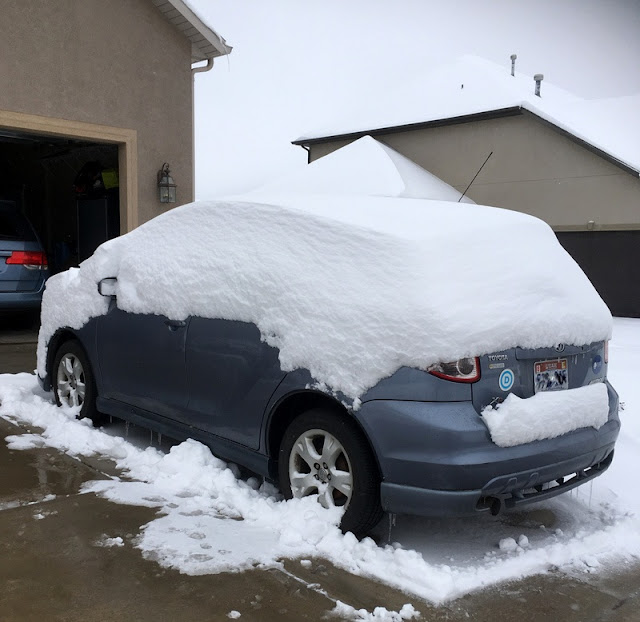 While I was still out shovelling, three very tired children stumbled home together: 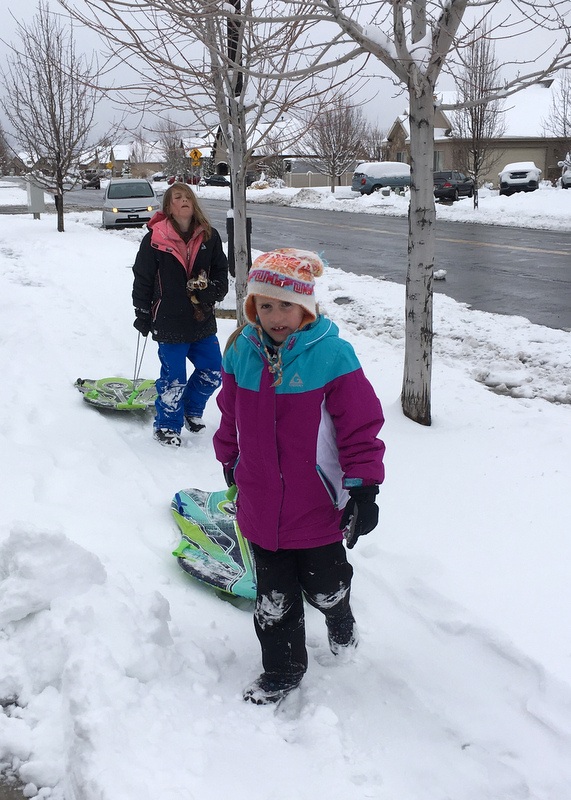 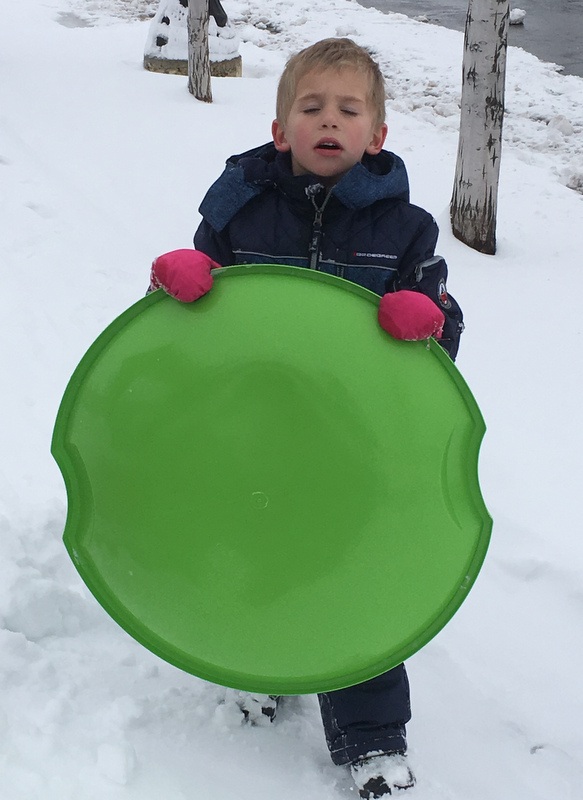 It was certainly a fun snow day!
Posted by Nancy at 1:47 AM