We are—very oddly—in our last week of school before Thanksgiving break and we're feeling woefully underprepared for the holiday season. Somehow our internal clocks reacclimatized to northern seasons and so the calendar keeps baffling us. How could we possibly be halfway through November?! The trees have just begun to turn colours and there's no snow in sight!

Anyway, we hit the ground running today and finished most of our schoolwork before heading to the library for the "hands-on homeschool day," where we learned about some indigenous cultures in Georgia. The librarian told us a number of legends and had a couple of crafts for the kids to do. They got to make "turtle-shell shakers" to scare the great spirit dog away from our cornmeal (he left a trail of cornmeal as he fled back to the sky, which became the milky way). They also got to make a strawberry craft to remind them to love their family and forgive quickly (I really enjoyed this story).

Even though the class is supposedly geared toward kids 6+, Miriam was already feeling like it was a little too juvenile for her, but she helped Alexander make the crafts, which he was rather happy about (especially that shaker).

After we got home we did a little writing assignment (I'm having my kids keep a gratitude journal this week based on my mom's post from a couple of days ago) and then started getting ready for our evening.

Ordinarily we can't make it to the homeschool days at the library because it interferes with orchestra rehearsals, but we didn't have a rehearsal earlier in the day because tonight was their first concert so we had a dress rehearsal prior to the performance instead. In order to get there on time we had to pick Rachel up from school, so when we got home from the library I made us a lovely picnic dinner (PB&J sandwiches, strawberries, cheese sticks—super gourmet) and then we headed off to the middle school.

It was about an hour's worth of driving (after taking a round-about way to get there so I could stay on roads I was familiar with, hitting some lovely traffic, and then being diverted around an accident) and I'm not sure I've ever been happier to have gotten anywhere. Rachel made fun of me for "stress-singing," a term she totally made up; she could not stop laughing at me!

"I will be so glad when we get there so I can park this car. I hate parking but at least it means I don't have to drive anymore!"

The tune isn't important, really. Just sing it ugly enough to embarrass your preteen, even though the other cars can't hear you.

Anyway, we got there, Miriam had her dress rehearsal, we had our picnic dinner, and then we had the concert, and then a reception after, and then we came home and all in all we were out and about for nearly seven hours for this concert (we didn't walk in the door until after 10:00). So I'm kind of glad the evening is over! 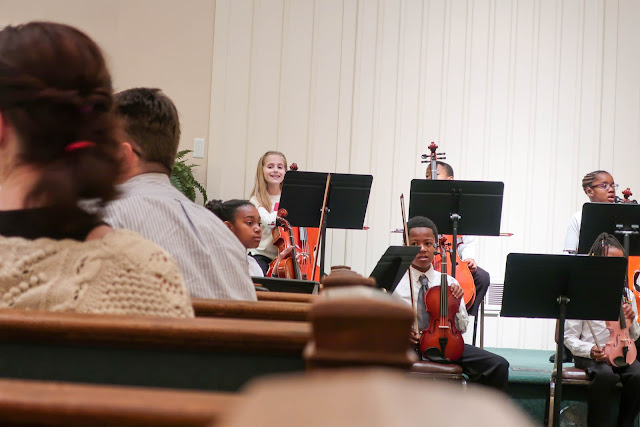 The scratching noise you hear is Alexander colouring on his magnet-colouring board thing (which he calls an iPad). He is also the reason the camera is a little wibbly-wobbly at times.

Andrew had to teach tonight so I had to juggle all the kids by myself, which was fine. I did that one trick where you choose the family with the most kids and sit behind them. That way no one knows whose kids are acting up at any given time!

The family in front of us had six kids, all about the same age as our kids (plus one older one). The more I looked at them the more I wondered about them. They were putting off a very familiar vibe...

So during the reception I approached them and broke the ice with a homeschooling question, throwing in "we just moved here."

"Oh, where did you move from?" the mom asked.

"Okay. I thought so. We're Mormons, too! And I saw you with your five kids—and you had a quiet bag with you and I just thought they have to be Mormon!"

Not that everyone from Utah is, just that if you have a whole handful of kids and are from Utah there's a very high chance you are also Mormon. This family is actually not from Utah (though they did attend BYU); the parents are both from here (and have the accents to prove it). But it was fun to connect with them! And they told us about another homeschooling family from our church in the orchestra.

Not that we only need friends who are also members of our church, but it is nice to have that connection as well. This orchestra is filled with wonderful families!

Here are some pictures Rachel took in the few minutes before the concert that we spent waiting in our seats (we did most of our waiting not in our seats): 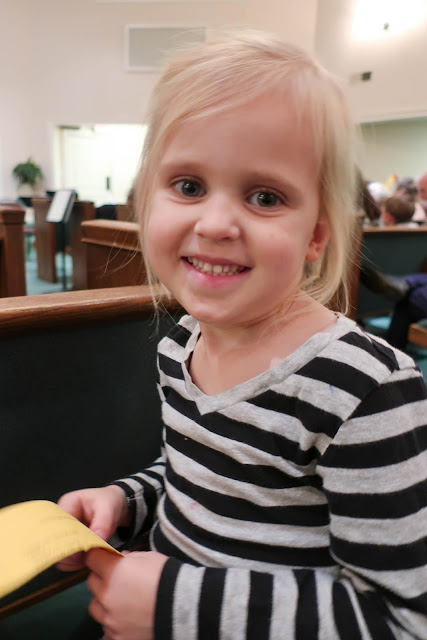 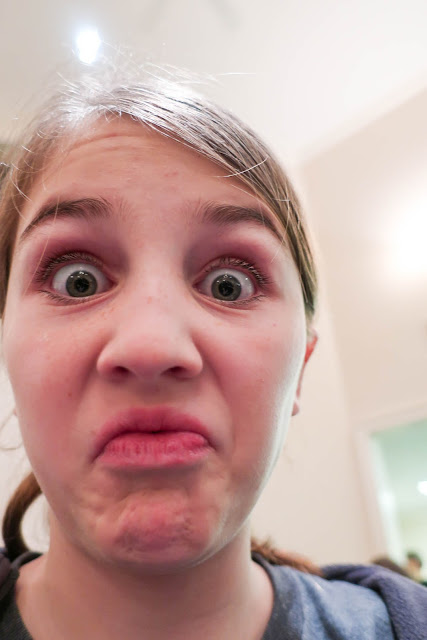 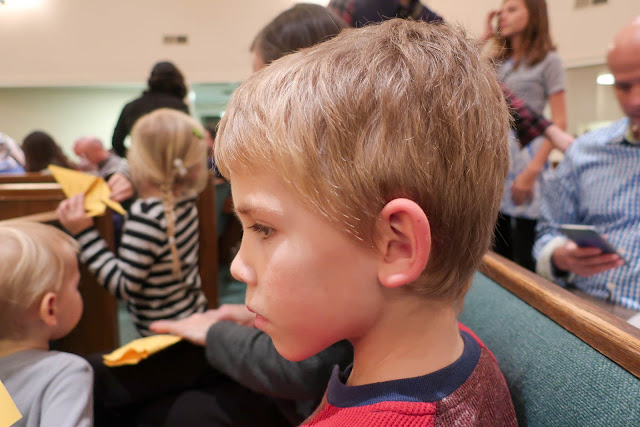 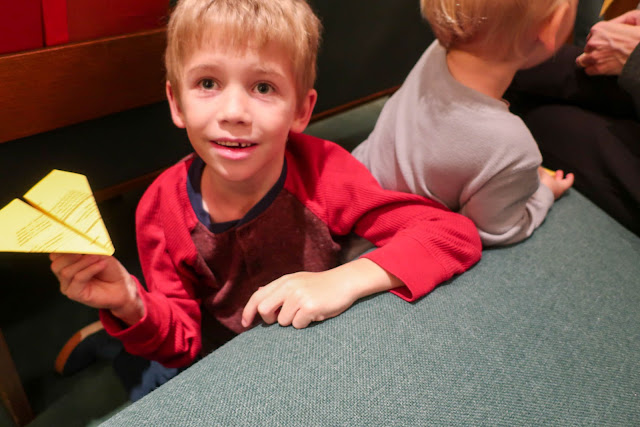 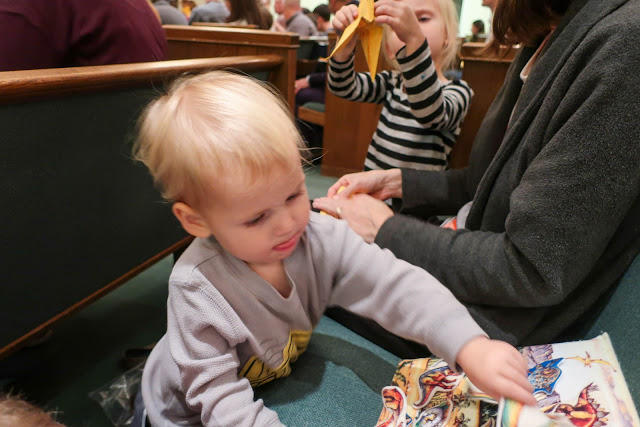 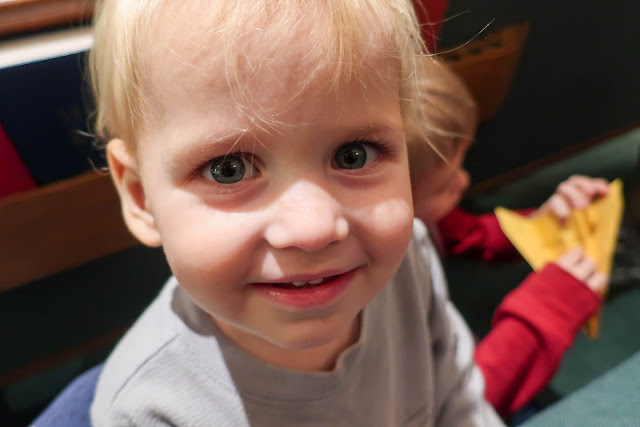 Andrew had to teach tonight so he missed the first half of the concert, but the church we meet in is very close to the metro so instead of going home he joined us for the last half of the concert (and the reception) and it was so nice to have a second pair of hands!
Posted by Nancy at 11:58 PM