So, I did it! I painted a tree on my wall and it went just fine. It's not quite symmetrical, which is fine because I meant for it to be asymmetrical but I'm afraid it's not quite asymmetrical enough, but that's okay. Sometimes when I make an attempt at representing something found in nature—be it a flower, a cloud, a sunset, or whatever—I always think that I didn't do a very good job, that it doesn't actually look like that. But on the other hand, sometimes I look at nature and think to myself, "See? Clouds can look like that! And would you look at this really weird twig!" and I know that pretty much anything I could draw or imagine probably already exists in nature (because nature's just that crazy). There's a high probability that a tree that's ever-so-slightly asymmetrical as this one exists somewhere in the world today (and that's good enough for me): 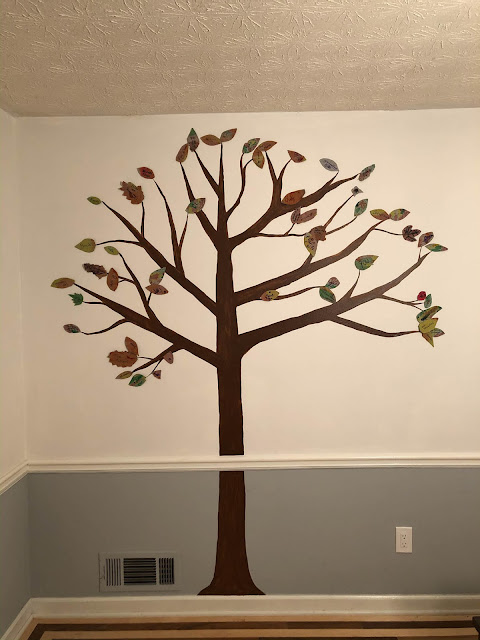 We've been slow about putting leaves on this year. It's been an exhausting semester. But we're slowly filling it up with things we're thankful for. and it's fun to have it be so big and bold on our wall!
Posted by Nancy at 12:09 AM