In happier news, the kids had their first cavity-free check up ever. We have always had to go back to the dentist for one child or another. But we bit the bullet and bought electric toothbrushes for all of our children (except Alexander, but perhaps he'll get one for his birthday since they're technically only for humans ages 3+) and I think that (as expensive as it was) it was worth it. Our children are much better at brushing with an electric toothbrush than with...manual...toothbrushes (and electric toothbrushes are much more effective overall, even more cost-effective when you factor in the cost of fillings (even with decent dental insurance)). We're happy it paid off.

All the kids went back by themselves, except for Alexander. I went back with him and he remembered what we'd practiced and talked about at home: we were going to open wide for the dentist and cooperate fully. The minute he got in that chair (in my lap, technically, but I was in the chair) his mouth popped open. And he would not close it for anything!

We waited in the chair for several minutes—no dental workers in sight—and he kept his mouth wide open, drool cascading over his lip and onto the bib they had so fortuitously put on him before leaving us there (otherwise his shirt would have been soaked. I told him he could close it but he just said, "Uh-uh!" and kept it wide open. 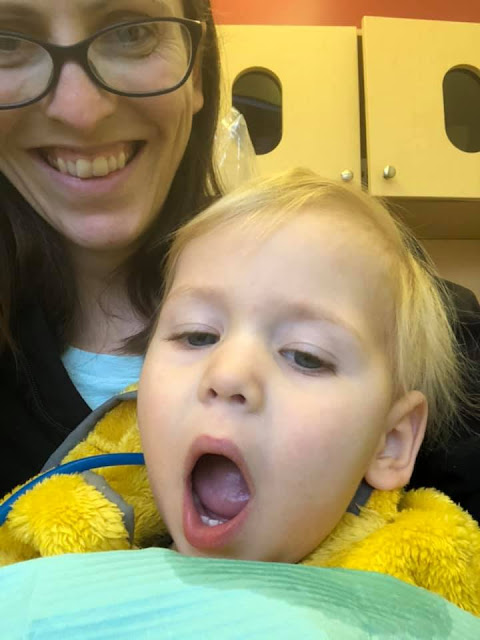 Such a silly boy! He did just fine—they counted and cleaned his teeth and warned me that his teeth are very close together so we may need to floss at least between his front teeth (she said to just sneak in when he's asleep and floss for him then...but she's also never tried to put him to sleep so I don't know that we'll be doing it that way). I sort of wish they'd do what our last dentist did for Zoë and give him a preemptive shave between his two front teeth so that we don't have to floss (little kids aren't big on flossing). She said that his teeth would separate as he got older (to make room for his grown up teeth), but I know from experience that they...won't. They'll just stay smooshed together and his teeth will come in a big jumbled mess when he's older and we'll have to get him a palate expander and braces and so forth. It's fine.

The other kids did great on their own, I assume.

Rachel had to use the small bitewings for her x-rays. They tried to use the adult-sized ones on her (because she's a fully-grown human, basically, with arms longer than mine, hands and feet bigger than mine, and inches taller than a lot of the staff at the office (not to mention a lot of the YW in our ward—the girl she's singing with in church is 16 but I could have sworn she was, like, 12...who knew?! Rachel is a full head taller than her (and Rachel doesn't seem particularly tall to me because she's still shorter than I am)). However, they soon discovered that she has an overactive gag reflex and took pity on her before she vomited all over everything (hallelujah).

Miriam went first so that she (and Andrew, who was home today, thank goodness) could run off to orchestra. Originally she didn't have orchestra this week (it's President's Day, after all) but then something came up for her teacher so he switched for another week off. Her teeth were fine.

Benjamin also did fine. The hygienist did run back to ask me if it was alright for him to watch "WWII stuff" because they'd asked him what he wanted to watch and he said, "WWII!" They found him a documentary (which Rachel almost ended up watching, too, when it was her turn, but then they told her she could choose anything on Netflix and she picked Stranger Things, which they did not ask me permission to show her, which I thought was strange (even though she has already seen it) because that show is pretty scary for a 12-year-old). They thought it was a rather odd request from a 7-year-old but he loves history (and I'm trying to imagine myself saying, "No way! Turn on some cartoons for that kid!" but I don't have enough "scope of imagination" for that (as Anne Shirley would say)).

I actually did go back with Zoë, but only for a little while, because Andrew and Miriam had to leave, so I had to go sit in the lobby with the boys (since Rachel wasn't finished yet). Zoë didn't really want me to leave her but she agreed to be brave and—from all reports—she was!

I am so relieved to have finally achieved a good (meaning no one has to go back) dentist appointment!
Posted by Nancy at 4:47 PM