After today Alexander will have gone without momma's milk for a full week. Some days moments are easier than others. This morning he woke up begging for milk and he howled down the moon when I told him there was no milk left for him (there is, but somehow we've reached the point of no return...after he willingly skipped nursing on Friday (didn't ask a single time) and then went the weekend with a lot of help from Daddy (the king of distraction) and suddenly here we are...).

It was a rough start to our day, but we got through it.

He had waffles and oatmeal for breakfast (anything you want, kid).

Yesterday afternoon when it was far too late to take a nap, he came to me and begged for snuggles.

"I want a nap," he said and even though it was far too late for such a thing I told him we could lie down together for a few minutes before dinner (I wasn't feeling well, anyway).

"But you can't have any milk," I told him (he has never taken a nap without nursing, which means he hasn't taken a nap this entire week (so it's been a long week)).

He nestled in for some snuggles and soon fell fast asleep. 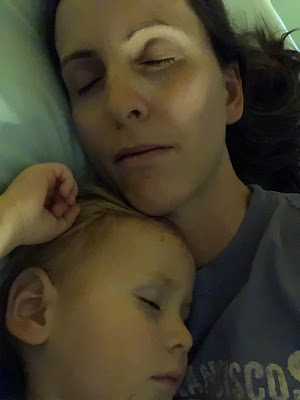 I wrote a poem one night a few weeks ago, when I was having trouble falling asleep (as per my usual) and was feeling particularly sad about knowing it was time to wean my walking, talking, potty-trained, nursery-going little baby boy. Once again, I don't know if it's any good but it felt good to write it, so there's that (also: I'm still so nervous about this forthcoming book of poems because while they all felt good to write I'm worried about sharing them):

The last weaning
Is this how Jack’s cow felt?

Old and tired
Dried up
Useless
And so sad.

Am I good for nothing now?

Trade me in
For magic
Beans!

Do those even exist?

Perhaps.
Buried deep
Inside of me—
Once upon a time—
There was a dream
A wish, a plan.