The glazing on our windows is so flaky that when I told Andrew that a wasp had flown into the house through the glass-less windows (because, you see, I had taken the glass out) and he subsequently swatted it, a chunk of glazing popped right off one of the bottom windows. 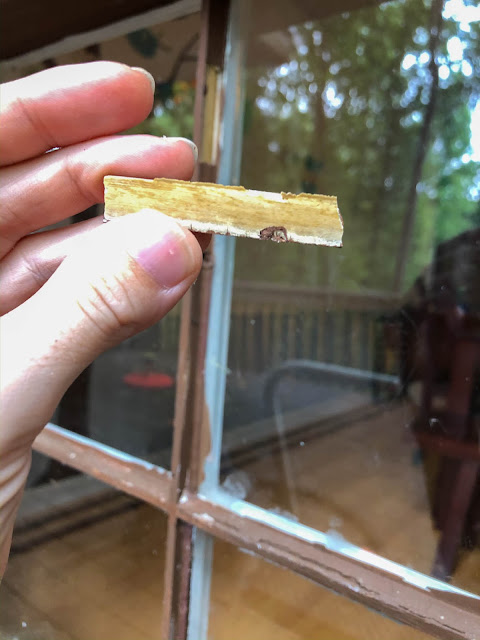 Which...is a problem...and that's why we're fixing the windows. This week was a little rainy, but Rachel and I did the top half of the window on Monday (wasp day; taller windows, taller helpers). Today the smaller kids and I did the bottom window.


Here's Zoë and Alexander helping vacuum up the mess I made chipping out the stubborn bits of glazing (why some glazing pops off when the kids slam the door but other bits are practically fused to the window is beyond me). Alexander is doing his best to get over his fear of the vacuum. He thinks it's an interesting thing—he likes to stick the hose into the body of the machine, he likes to pretend the hose is a horse and say "wee-haw!"—but can't stand the noise it makes when it's on. Sometimes he even turns it on by himself and then panics and runs away. He's being so brave, keeping his hand on the hose while the vacuum is on: 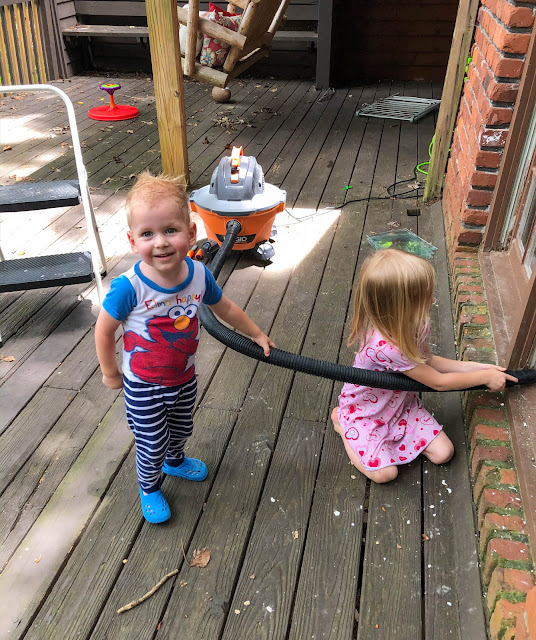 Soon after Zoë turned the hose on him to "give him a mohawk," which he did not like: 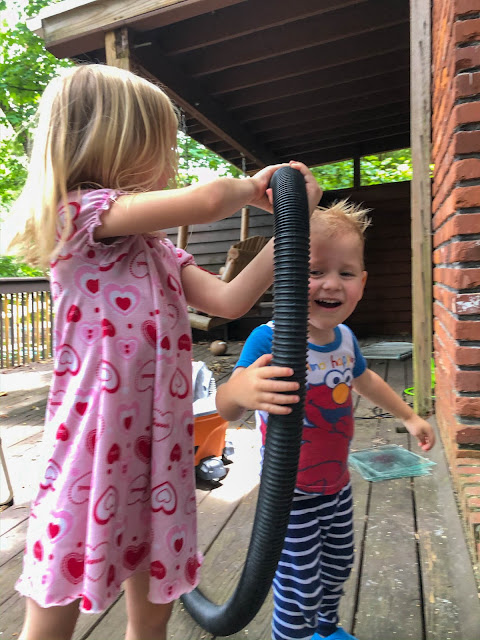 Here's Rachel helping me on Monday: 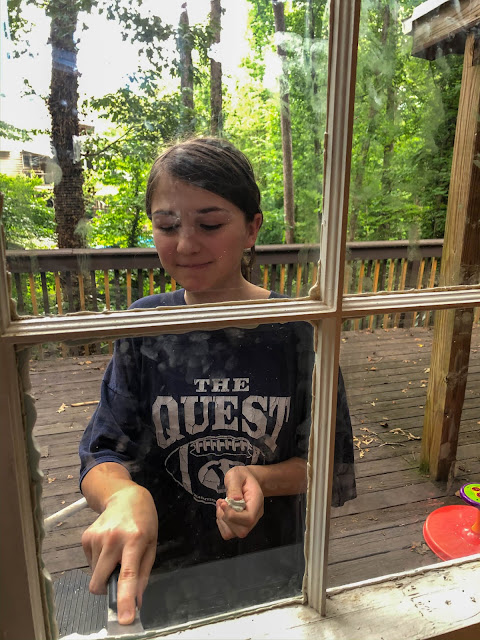 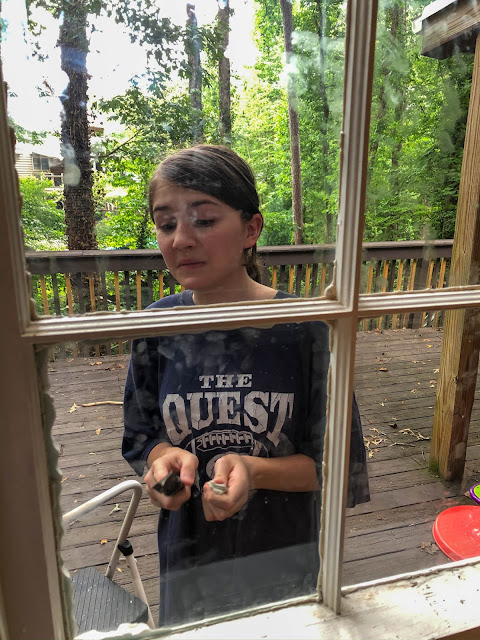 And here she is today while the rest of the kids were helping me: 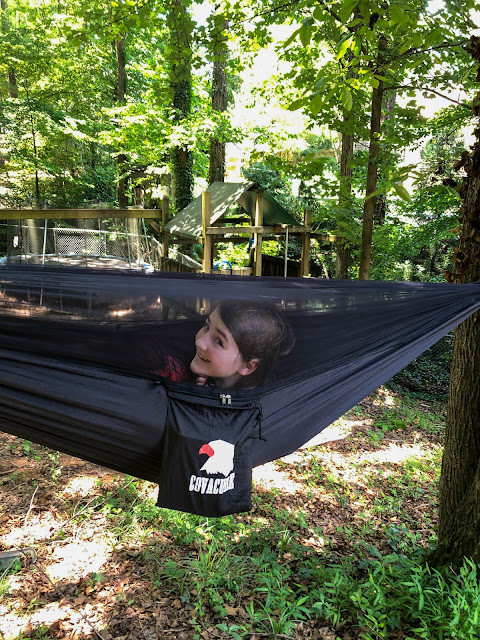 I made the kids a list of things to do this morning, which included helping with window glazing, cleaning bathrooms, practicing their instruments, and having reading time in the hammock. They really enjoyed that last part of the to-do list.

While I was working on the window, Miriam came up to ask if she could help, too. I told her that she could once I had the glass in, but then she reminded me that I'd had her help with getting the frames ready for glass before. So I said, "Sure, that would be great."

"Good," Miriam said. "Then I can cross it off my list of things to do."

"Is that the only reason you're helping me?" I asked.

"Oh, I do," Miriam answered sarcastically. "This is a very interesting task and I enjoy doing it very much, especially because I get to work with you."

She really was a good helper. 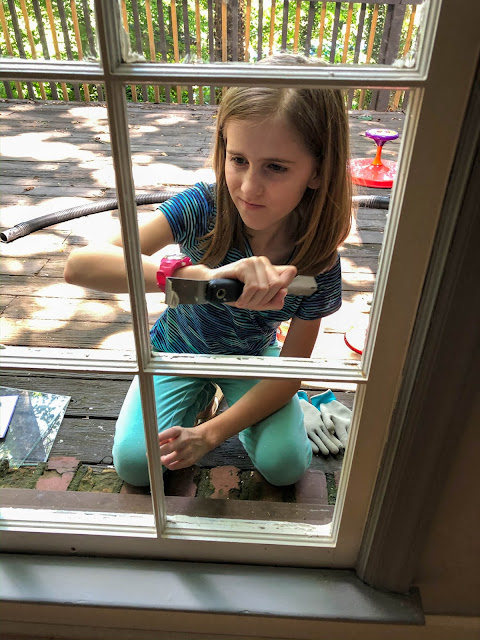 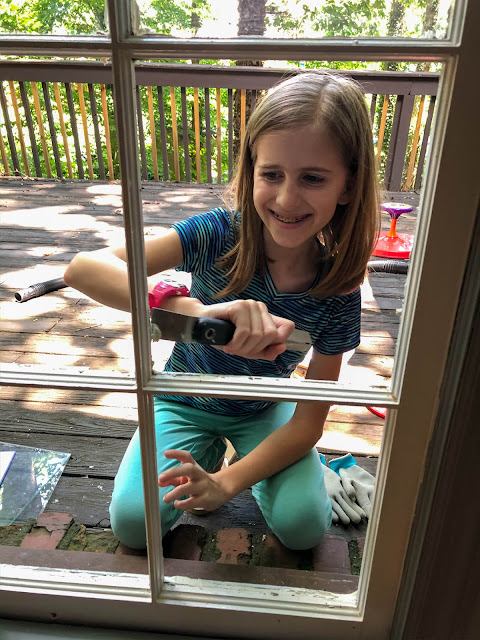 Compared to a few of my other helpers: 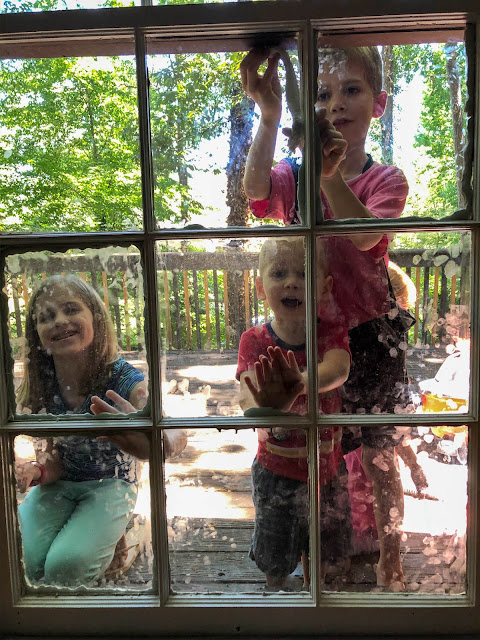 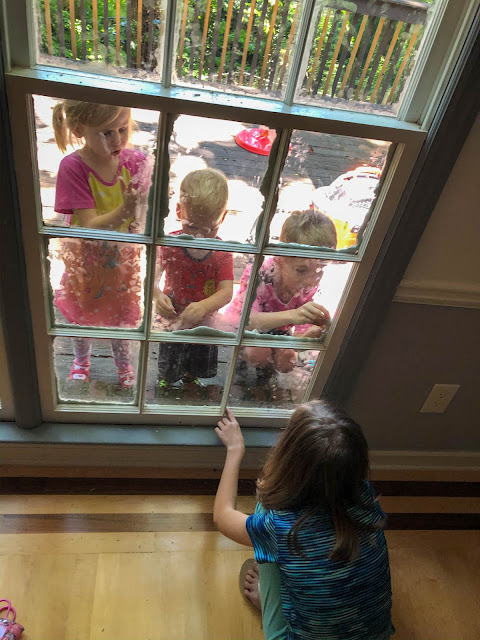 We've now finished glazing 81 panes of glass (9 window panels or 4.5 of our double hung windows (I have no idea how to define what a window is, apparently)). We've used one gallon of glazing compound, which is quite a lot of glazing. I wanted to figure out how much glazing we used on each pane of glass, more or less, which would make it easier to calculate how much glazing we'd really need. I really had to guess for this project and bought a lot. Anyway, it came in two rather heavy buckets—18.8 pounds each.

So if we say I glazed 80 windows and that each bucket of glazing compound was 20 pounds, that means I would use a pound of glazing for four panes of glass. One pane of glass, then, uses about a quarter of a pound of window glazing (or four ounces). Ignoring my rounding and all the bits of glazing compound that we dropped. Just in case, heaven forbid, I ever have to re-glaze our windows again and want to know how much glazing compound to buy.
Posted by Nancy at 12:16 AM