I sat a little shell-shocked at my computer after I got the news that Greg Hope had died. It was rather late at night and Andrew was working. For levity's sake, here's a picture I snapped of Andrew this evening before he began filming his lecture: 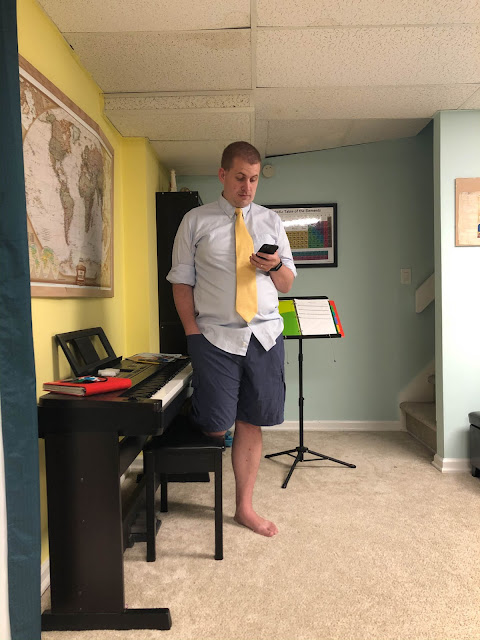 Business on the top, casual on the bottom. I haven't seen him wear pants in weeks (it would be months but Benjamin's baptism last month kind of broke his streak).


Anyway, he walked upstairs to go to bed and found me furiously pounding away on my keyboard, typing to my family.

For levity's sake, I will mention that my kids didn't know the Hopes well (though they did connect with them a time or two at family reunions and parties). Today when I told the kids they would be on their own for a while because I had to go to a funeral, Rachel said sympathetically, "Oh, right. Bob Hope."

"Right. Greg Hope. Who's Bob Hope, then? That name sounds so familiar..."

Time to pull out Eddie Foy and the Seven Little Foys! Among, you know, other features. It's not like Bob Hope was at all famous...

Anyway, Andrew came upon me feeling a little crumpled and he wrapped his arms around me and said, "Sorry everyone you know is dying."

But that's fine. I mean, obviously he's suffered some losses as well. Obviously.

So, I mean, in that regard...life is also not fair. But life never is, is it?

Anyway, sometimes I feel a little sad about silly little things like...that I don't have any grandparents left. But tonight, as I (finally) responded to an email from Grandma Pat and as I looked at Aunt Nicki's Canada Day greeting that she sent to me, I realized that life is as unfair in goodness as it is in pain. Andrew's family is so wonderful; they made becoming a part of them easy. I'm so lucky that I get to claim them as mine.

So thank you for your messages, Grandma Pat and Aunt Nicki!

And, honestly, Reid, you, too.

Grandpa wrote a story for Zoë that I'm trying to lay out right now (with some pictures) and I can hardly get through it without crying (it's just so sweet (we're hoping it will help Zoë process some of her Very Big Feelings about Life and Death)).

(Also, Mom, I'm really fine. Greg's death was hard because he's so young and it just isn't fair but life doesn't care about that, which we know, so I'm sad but I'm fine. And I loved that line from the funeral (which, by the way, was the longest funeral ever (I mean, it was lovely but it was definitely on the long side)) that...I think...the bishop said, "It's a veil, not a wall.")
Posted by Nancy at 2:14 AM