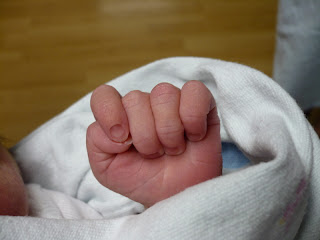 So, there I was, pushing with all my might when the nurse said, "Oh, wow, look at all that hair!"

Andrew left my side for the first time to go and look at Rachel's hair, which is 1.3 inches or 3.4 cm long, by the way. I stayed where I was marveling that our baby was on her way out and they could see her.

He rushed over to the bags we had packed for the hospital and frantically searched them for a few seconds.

"Okay," he said when he found what he was looking for, "I'm ready."

The nurse and I looked over. There was Andrew, brandishing a pair of baby fingernail clippers which, when he saw we were looking, he made some snipping motions with at the air.

"For what?" the nurse asked.

Considering we were just seeing hair, I was wondering what the fingernail clippers were for, myself.

"You mean we don't need these yet?" Andrew asked innocently.

"She won't need those until you go home," the nurse said.

"Oh," said Andrew, and he tactfully closed the clippers and dropped them into his breast pocket and tapped them gently, "Okay, then."

Later I asked him why he did that. He said that I said that the baby could come out "needing her fingernails clipped."

It is true that I may have said something to that effect. Those may indeed have been my exact words. However, what I meant when I said that was that they would come out rather long, not that we should snip them off as I was delivering.

Her fingernails were long. So long, in fact, that they cut them in the nursery...but not until she was a day and a half old.

I guess Andrew was having a literal-minded day. I'm just glad he didn't go out and get a curling iron when one of the nurses cooed, "Her hair is long enough to curl!"
Posted by Nancy at 3:33 PM