Or would you rather...

"Andrew..." I moaned. And then moaned it again. And then started kicking him and calling his name at the same time.

Finally he replied sleepily, "What?"

"Will you bring me the baby?"

"Wouldn't you rather have a wallet?" he responded.

"But everyone wants a wallet..."

I kicked him again, "Andrew, just get me the baby!"

He stumbled out of bed and brought me the baby. Needless, yes, since she is on my side of the bed...but it was almost time for him to get up for work anyway.

Rachel takes after her father in this respect--she is a very talented sleeper. She will get hungry in her sleep and start rooting around but won't wake up enough to actually eat, which is very frustrating for her. I have to give her a few minutes of dedicated wake up time before she'll do anything...just like her daddy.

When she's awake though, she's very awake. Just now we were singing...

We started with the Grand Old Duke of York and we worked our way on to the banana fana song. I think I found something that almost rhymes with Rachel: facial. Now she can get a facial at the store, at the store.

See, fachel almost sounds like facial which almost rhymes with Rachel. Now we can sing the Quarter Master Store song without anyone feeling left out.

That's a little bit of a stretch since I've never seen a break dancing wallet, but I don't think we'll ever start singing to the wallet so that's okay. Andrew's dad does want me to keep an eye on Andrew to make sure he doesn't start putting the baby in his pocket and feeding his wallet though. 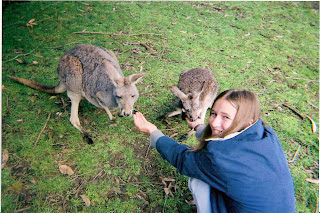 To be fair, I suppose I must confess that I say some pretty silly things when I'm sleepy, too, but usually I say silly things late at night as I'm falling asleep. For example, I was telling Andrew that my mom and I had a discussion about the best practice for gestation. We figure marsupials win.

I mean, carrying the baby around for 10 months and then pushing it out is really no fun at all. Sitting on a pile of eggs doesn't sound like a piece of cake, either.

Yes, marsupials definitely have it made.

Since I had just seen some pictures of Josie feeding some kangaroos, I was thinking about kangaroos. We were wondering how the joeys get in the pouch in the first place. I was drifting off as we were talking about it and mentioned something like, "The koalas do it."

He started laughing, which brought me back to the present. He told me what I said. We laughed about that for a while.

If I could write with an Australian accent, I'd launch into my monologue that went something along the lines of, "Here we are, deep in the outback, trying to catch a symbiotic relationship at its finest. If we're lucky we'll see...oh, there's one now. Up in the tree. A koala. She's been watching that mother kangaroo all day. Now that the kangaroo has fallen asleep she's going to make her move. And there she goes..."

Apparently the joeys just crawl out of the mother and into the pouch themselves. I would definitely rather deliver that way! The downside is that kangaroos are always pregnant and I'm not sure how fun that would be.

Me and my joey 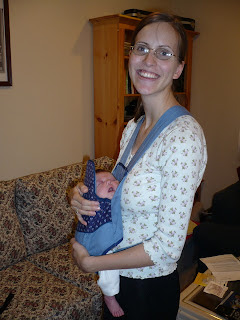