Why my brother is cool

Patrick received the Melchizedek priesthood yesterday, so now he's an elder, which means he can help bless Rachel, which will be cool.

He's a good kid. I'm excited to see where he'll get called on his mission, although that won't be for a while yet since he still has about a year before he can go. 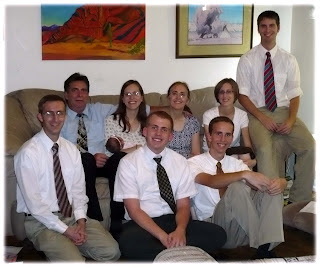 Now, why is he so cool, you're asking?

At prom, Patrick broke his foot. Apparently our family just manages pain well because we didn't take him to the doctor for over a week. But that's not what makes him cool.

In his own words:

"Saturday, May 19th...So after we play tag for about 20 minutes we decide to go to a park named "Discovery Park". (Just a side note... Discovery Park is the most amazing park in the world, it is free and has: a rocket ship, a volcano*, a 'bee colony', sound amplifiers, and a whole lot more if you ever come to Utah or if you already are in Utah what are you doing on face book you should be at Discovery Park!!) Now for the fun part, we break off into teams to play capture the flag on the playground but to make it more exciting we add in a grounders rule. No walking on the ground. (we quickly amended this rule to allow us 2 steps) So everything is fine until I get to the volcano. It is enemy territory and just as it so happens they really wanted me in jail. So now i am trapped at the bottom of the slide, there are 3 people trapping me from the sides so the only place i can go is up. I leapt up the slide and made it in one jump over their hands. Then all of a sudden they are there and i have no where to go. So me being the intelligent person I am...jumped. I jumped over a 4 foot wall that was behind the slide so that gap was about 3 feet across and 4 feet high. I cleared that part easy but they barely touched my foot. Now the volcano is multi layered and it has an inner deck which I hit heel first at about a 35 degree angle. It hurt but not as much as i thought it would have so I limped off to jail. (my friends who were there at this exclaimed "wow Patrick you flew" I was more like "ow my bum hurts") I got out and about 15 minutes later we end the game and take our dates home. I get dressed take some Advil and was fine for the rest of that night." [sic]

He danced all night on his broken foot and after driving around to drop all his friends and their dates off, he didn't get home until late.

The next day was Sunday and my mom decided not to wake Patrick up for church. After all, he could just go to the Singles Ward with David since that ward meets in the afternoon. When my mom walked into the kitchen though, there was Patrick already wearing his Sunday best.

"Oh," said my mom in surprise, "I was going to let you sleep in today. You were out so late last night."

"Mom," Patrick chided, "That doesn't matter. I go to church."

He figured out that the easiest way for him to choose the right is to choose early and never waiver. I'm glad that he figured that out because it will help him a lot as difficult choices come his way and he won't have to make them since he already has. That doesn't mean he'll never have to make a difficult choice because it would be impossible to decide everything in advance, but he's definitely made a good start.
Posted by Nancy at 4:15 PM