Over dinner one night we had a very long and repetitive conversation about the sultan's mother. Apparently Turkish tour guides are very memorable and the Lewis children had to relate the following story (yet again--we've heard it several times now).

When the Lewises were in Turkey, in Topkapi palace, in the sultan's mother's room, their guide said,

"This is the room of the sultan's mother!"

If only, if only you could hear the boy's intonation. He starts with a low register and jumps to a high one with every other syllable. And since he's two it really came out more like this,

For some reason he chose to break out that little catch phrase at dinner and for the next 15 minutes everyone else mimicked him and corrected each other's tones and pronunciation and told the story so many times so loudly that I eventually had to ban it from being said again that evening under serious threat of being sent to their rooms for the rest of their existence.

When we were in Turkey, in Topkapi palace, no less, our tour guide was equally memorable. We were taking a tour through the Harem where tour guides are mandatory and, thankfully, free.

Our group was so large that it was difficult to hear his explanation of each room. As we went through the tour we worked our way up to the front of the group so that we could better hear what our guide was saying. We found out that it didn't matter if we heard everything that he said as long as we heard at least one sentence sandwiched between two of his trademark statements, a very personal, non-pluralized statement that he used to address our group of 60 or so:

Ironically the room we most remember his various explanations of is the room of the sultan's mother.
Us in the Harem 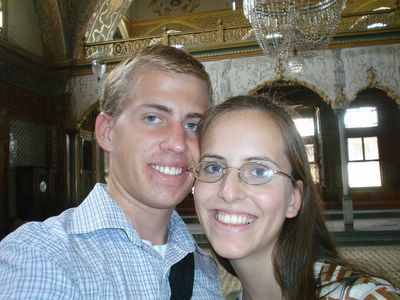 We spent the rest of that day mimicking the poor man.

We spent the rest of the next day mimicking him as well. We actually saw him at a McDonald's on the Asian side of Istanbul. Yes, we went to McDonald's in Turkey. Not very adventurous, I know, but remember that I am married to Andrew and he is not an adventurous eater. He's only recently begun to expand his palate and experiment with his foods. Plus, it was hot and we wanted ice cream. All the McDonald's that we saw in Istanbul had little walk-by ice cream booths at the front of their stores that sold only ice cream products so it was always very tempting to stop and grab one. Anyway, we had gone over to the Asian side just to say that we went over to the Asian side. Somehow it's just interesting to be able to continent-hop so quick and easily.

While we were at the McDonald's and still mercilessly imitating our tour guide, we saw him, which we thought was too ironic.

Two years and eight months later and we are still quoting that tour guide. So if you ever hear us answer each other (or if we accidentally answer you) with "Yes, my guest," at least you'll know why. Yes, my guest, and if we describe the same thing several times with minimal observations and slightly different wording you'll understand why.