We spent our honeymoon in Italy--Rome, mostly. I had already purchased a ticket to Europe when Andrew proposed to me and some very nice people at Reid's work chipped in to buy Andrew a ticket so that we could go together. It was definitely a honeymoon on a budget.

To clarify how much of a budget we were on, we didn't only rely on the kindness of donations for airplane tickets. We relied on much, much more than just that. We also spent several days in Vicenza (in Northern Italy "by" Milano but much closer to Verona and Venice, both places we visited) housed in the Eldredges' basement. During our layover in London we visited my friend Andrea, and it was a good thing, too, because I don't think we could have afforded a bite to eat if we hadn't been invited to dine at her place. More than one night was spent lounging sleepily on airport furniture while waiting for our red-eye flights (because those are cheaper). 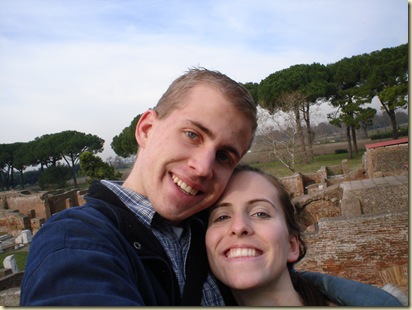 When we were in Rome we splurged, even though there were several families that we could have stayed with, and booked a double room in Two Ducks Hostel, a relatively cheap stay compared with an actual hotel. Since we had booked it through a separate company we ended up getting a better deal than what is offered on their website. It was cheap and was advertised as a private double room with continental breakfast. We had to share a bathroom, but we could live with that. We booked it. 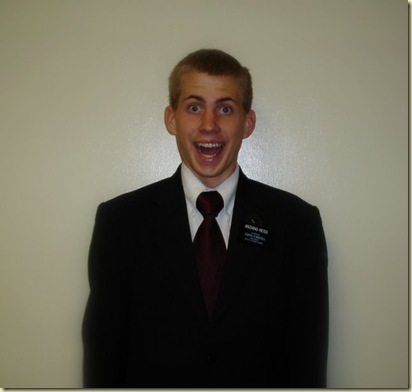 Finding the hostel was easy as pie. Andrew had spent about 15 months of his mission in Rome so had gotten to know the city fairly well. The hostel is within walking distance of the Termini train station on Via Calatafimi. We walked straight there after a rather awkward run-in with some of Andrew's missionary buddies at the train station. Termini happens to be the main hub for transfers to take place and we happened to show up there on the 2nd transfer after Andrew returned home. We weren't as confused to see so many missionaries there (once we figured out what was going on) as they were seeing model-of-goodness Elder Heiss in street clothes, holding hands with a girl. 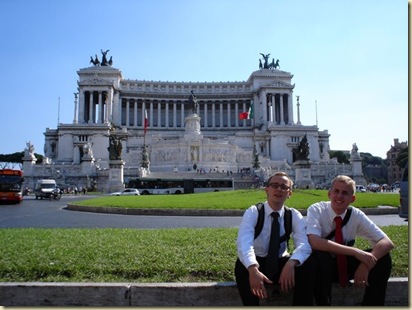 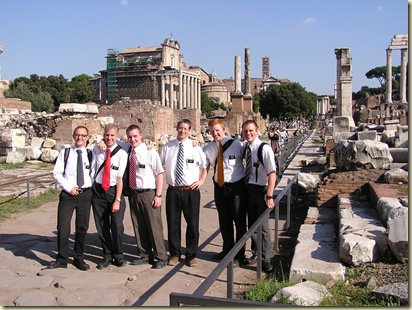 Andrew and companions in Roman Forum 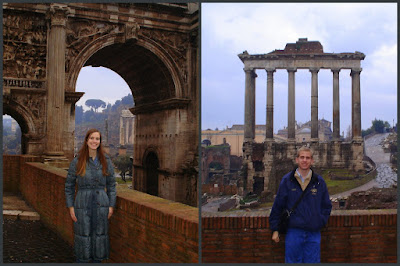 Us in the Roman Forum

The hostel wasn't quite what we were expecting. It consists of a cramped and dank apartment on the second or third floor of an apartment building, run by Romanians. We aren't picky when it comes to hotels, though, so we went to check in, anyway, assuming that we would get our private double room we had booked.

The "desk" manager, a young man who sat behind a desk that blocked so much of the hallway that we had to turn sideways to slip past, led us back to our room and explained the intricacies of forcing the door to open, turning the air conditioner on and off, what time breakfast would be served, and where the bathrooms were located (across the hall). Everything looked in order.
As the young man was turning to leave I noticed a little cot in the corner of our room.

"That is my bed," he answered.

"But we asked for a private double room." Andrew said.

"This is private. I sleep here. You sleep there. I have a key. You have a key. It's private, see?"

"But we're on our honeymoon," Andrew explained.

Needless to say, our room was vacated and we spent our first Christmas together at Two Ducks Hostel in relative agony--sleepless and uncomfortable. The beds were nothing more than glorified cots, which we could have dealt with just fine (since glorified cots are much more comfortable than airport chairs) if it hadn't been for the noise. They were nothing like the well-decorated rooms we saw in the pictures, but we could also deal with hideous orange quilts. 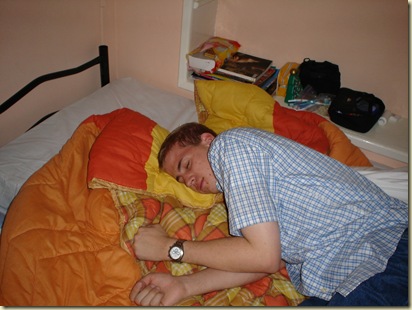 Say what you will about Americans as tourists--they are loud and obnoxious, etc., etc., etc.,--and I will probably agree with you but, honestly, as bad as Americans are, I think Australians might just be worse. There was a group of Australians staying at the hostel the same time we were and they brought loud-and-obnoxious to a whole new level. We could hear every word they said all night long.

One conversation, between the desk manager and a drunk(?) Australian girl, was particularly memorable. She had used the word "cheers" when talking with him. He was confused about it so she was attempting to teach him how to say it. Since she was Australian, though, she didn't pronounce the letter r the way the young Romanian gentleman was expecting and "cheers" came out sounding like "ches," more approximate to the French "chaise" than the American English "cheers."

"No, not cheese," she giggled heinously, "Cheers!"

We still quote that, by the way. Just today when we were having lunch after church Andrew offered me some cheese.

"Would you like some cheese?" he asked in what was either his best Romanian or best Australian accent, "Like cheese for mouse?" 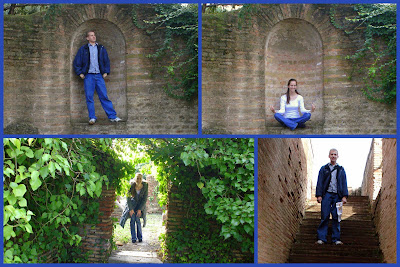 So our honeymoon wasn't as romantic as we may have been hoping for, but who needs romance when you're making memories? It's too bad we lost so many of our pictures. Andrew reformatted his laptop after we had downloaded our pictures but before we had backed them up and we're missing a large chunk our our honeymoon documentation, including a picture of us kissing on a bridge in Venice by a sign that said, "Cheeser." Or something like that. I can’t remember, quite, because we don’t have the picture. But you get the point. We were laughing about it then and we still laugh about it now.