This semester has been so busy and crazy—we’ve hardly had time to do anything fun (in Cairo). Between all the time Andrew spent writing and all the time I spent sleeping we had no time left over. Andrew has a two week break before the summer semester starts, a good portion of which we already spent while we were too sick to do much.

Today we decided that we should (finally) get out and do something, so we headed off to Roda. Andrew wanted to get his ISIC so that we don’t have to haggle to get the student rate at tourist sites, so that was the first item on our itinerary. I had already been, so I took him right there without getting lost or anything. He was impressed that we made it because I have no sense of direction, but I am good at recognizing landmarks so it all works out.

After we did that, we headed out to visit the Nilometer and the Umm Kulthum Museum. Roda is a relatively small island so everything is fairly close and we were able to walk from the metro to all our destinations. I was tempted to go find the hospital just so that we’d know where it was, but we didn’t.

The Nilometer is in the same complex as the Umm Kulthum Museum. It costs 8 LE to visit, at the student price, and was pretty cool. 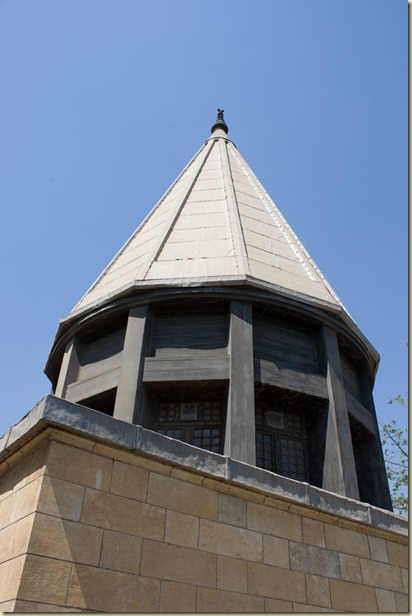 There is a roof over the Nilometer and the ceiling is absolutely stunning, as most ceilings here are. It was destroyed by Napoleon and then rebuilt in the Farouk-era (sometime before the 1950s). 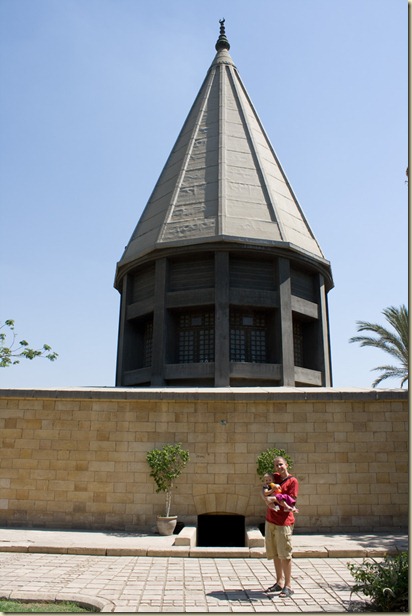 Getting a picture of the ceiling was a little difficult since the Nilometer is essentially a huge, gaping hole with stairs circling down to the bottom and a huge column in the middle. To make guests feel more secure about looking down such a tremendous depth, they've gone through the effort to construct a rickety guardrail around the Nilometer. Since it shook when Rachel was leaning against it, I didn’t feel very comfortable bending over it to look either down or up. 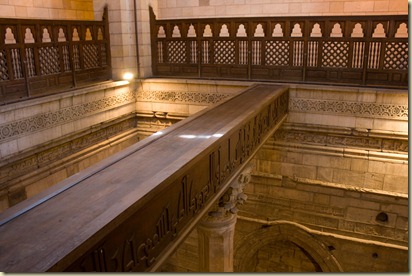 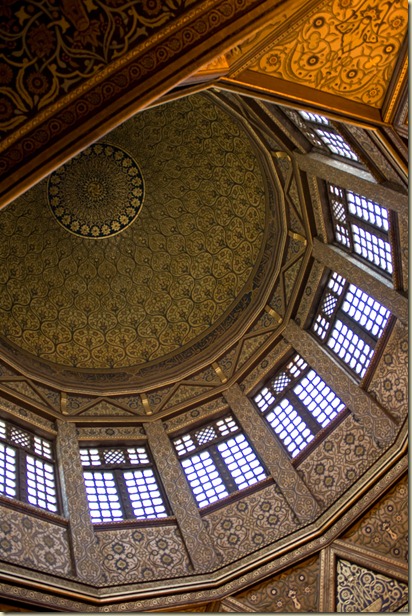 The column is marked in cubits to show the level of the Nile. Enough rise in depth was cause for celebration because it meant their crops would be watered and they’d have a good harvest; too much rise was cause for panic since it meant that flooding would most likely be devastating. 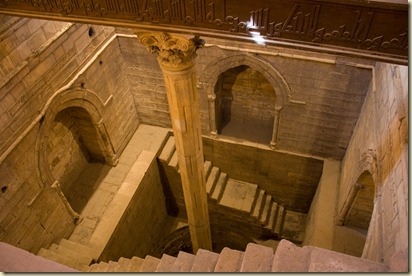 We read afterwards that we could have bribed the guard to go all the way to the bottom, which would have been really neat. We’ll have to do that next time, although it’s quite a long ways down to the bottom and there is no railing so I don’t think I would want Rachel going up and down those stairs.

She kept calling it a swimming pool, even though it hasn’t been in use for almost a century and is as dry as a bone. She also called the Nile a swimming pool. We went and sat in the shade by the Nile behind the Nilometer after we’d gone inside. 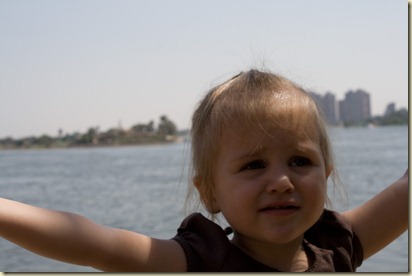 Rachel was fine if she was standing on the ground or sitting on my lap while I was sitting on the wall, but when we sat her on the wall by herself she got a little nervous. 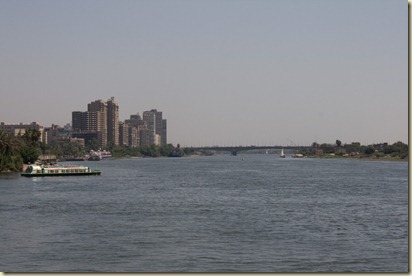 Even though the wall was a good 3 feet wide, she was sure she was going to fall in, poor girl. At least she knows that she can’t really swim yet! 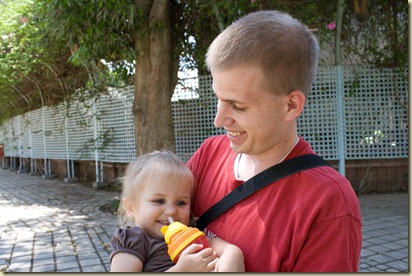 When we were all fully rested and hydrated, we wandered back to the Umm Kulthum Museum, which was a real treat, not because the museum was anything to write home about, per se, but because it was nicely air conditioned.

Umm Kulthum is a rather legendary Egyptian singer/actress. People still love her, worship her as a star, and listen to her music. There is a street named after her on Zamalek. Everyone knows who she is, even small children. And she died in 1975 so it’s been a while since she’s done anything new.

The museum was a small tribute to her, housing a few of the gowns she performed in, some scarves and sunglasses, awards, records, contracts, pictures, phonographs, and instruments of hers. 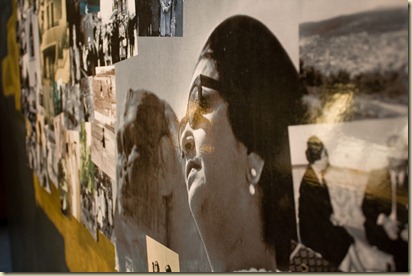 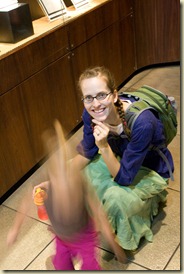 Music was playing the whole time, which we discovered came from a room showing clips of her singing. Some of her songs—songs, mind you, not performances—were over 2 hours long. I can’t imagine singing for that long!

Rachel couldn’t even sit still for a picture…let alone listen to a whole song that long. She was a blur in every picture we tried to take! Andrew wanted to turn the flash on but the conservationist inside me told him he’d better not. This museum, although small, was clean and they seemed to at least be making efforts to preserve the artifacts, which is more than I can say for other museums we’ve seen here.

There were some statues in the yard surrounding the museum. Some of them were interesting, others rather ugly. Our favorite was one that looked kind of like a treble clef, only made of a music staff. One side had Arabic writing on it, the other side had English. 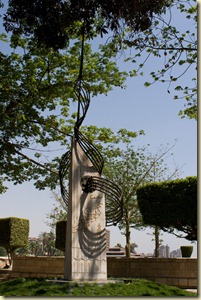 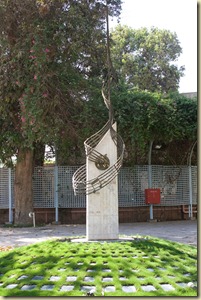 We crossed the Nile by the museum because there was an interesting-looking bridge, and because we figured that we could just walk along the Korniche to get back to the Malek al-Saleh metro stop, which is where we got off to come to Roda. 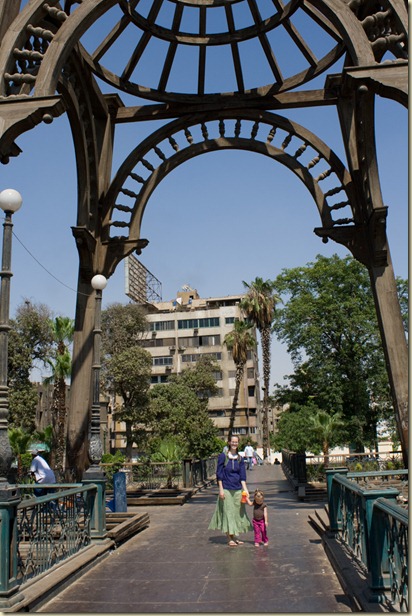 The Nile is so pretty in Roda. I guess it’s kind of pretty in Maadi, too, but Roda seems to have better landscaping along the banks. Maybe that’s because there aren’t a bunch of restaurant/tourist traps that dump all their rubbish into the river instead of letting it go directly to Garbage City. It was much more lush and tropical. We enjoyed looking at the trees and watching the storks from the bridge. 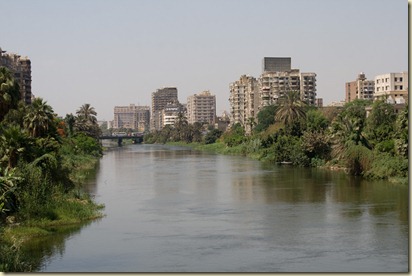 When we were on the bridge, however, we realized that we’d have to walk all the way to the bridge you see in the picture (and beyond) to get to the Malek al-Saleh station. We wondered if Mar Girgis wasn’t as close, if not closer, from where we were.

We ended up following some guy, who said he was headed that way, through a residential area where we got bombarded by children playing soccer. Sometimes young teenage/pre-teenage boys are the worst people to run into.

Andrew was walking ahead of me, carrying Rachel, and trying to keep pace with the man we were trying to follow. I was dawdling behind in that “I’ve been walking all day and did I mention I’m 18 weeks pregnant” way. The boys started waving their hands in my face and pulling on the backpack I was wearing and on Rachel’s sippy cup, which I was holding.

After I’d made my way through most of them, one of them pelted the soccer ball at me. It whizzed past me, barely missing my head. I turned around and glared at them and was about to shame them by pronouncing a pox on their household or something like that when a nice man who was sitting on his front porch (read: strip of sidewalk less than 1 foot wide, on which he was precariously balancing a stool) stood up and berated the boys on my behalf. They all ran up to me and apologized profusely before going back to their game.

He probably did a much better job at telling the kids off than I would have. The only “mean” thing I really know how to say is “Ya haram!” which basically means “Oh, for shame!” or “Shame on you!”

Yeah, that would have showed ‘em not to mess with me.

Other than that, it was a nice, quiet walk. I would have loved to take some pictures but we didn’t want to lose our guide; we’ll have to go back. There were dogs standing on roofs, buildings that had crumbled to a pile of ruble and were now being used as garbage dumps, a bright blue mosque, and many other interesting things.

We ended up crossing a bridge and landing right in Coptic Cairo, just meters away from the Mar Girgis metro station. It took hardly any time at all and we didn’t have to cross and highly congested and dangerous roads.

Since we still had a half hour until Coptic Cairo closed, we went into the gardens and let Rachel play around for a while before catching the train home.

Next time we have company we definitely plan on doing Coptic Cairo and the Nilometer (and Umm Kulthum, too, for the music aficionados) on the same trip. Who knew they were so close and connected by such an interesting walk?

We got off the metro a stop early so that we could buy some fruit on our way home. They finally have local grapes available for sale. Foreign grapes are so expensive but you can buy local grapes for $1.50-$2.00 per kilo, depending on which kind you buy (some are more expensive than others).

We were wondering when the grapes were going to show up!

Andrew suggested that perhaps they didn’t actually grow grapes here. I told him not to be ridiculous. They have many local dishes that use grape leaves, so obviously they grow grapes. He then suggested that maybe they export all their grapes and keep the leaves to use locally since no one else wants them.

I agreed that no one else probably wanted the grape leaves—grape leaves are right up there with mulukhiya; my taste buds don’t exactly enjoy either—but I voiced how ridiculous I thought the notion of exporting the entire good-tasting part of the plant was.

Our fruit vendor, The Tree, had local grapes available today. We didn’t know that, though, so we bought them (probably overpriced) at Metro Market when we stopped to recharge our phone minutes. We’ve been eating them all evening, though, and they’re so good and relatively inexpensive so we’ll have to go back to get more!

My favorite thing about the local produce is that when it is in season it tastes so good. The tomatoes taste sun ripe and garden fresh. The grapes taste like the grapes that grow on my parents’ backyard fence—sweet and warm. We buy our bananas off a huge cluster that hangs by the fruit stand. Nothing’s been picked early and left to ripen in a box while being shipped halfway across the country only to sit in the grocery store for weeks under florescent lights until someone buys it.

Our fruits and veggies are fresh and sit out ripening in the sun all day. That, of course, also has its drawbacks. The fruit doesn’t last long, sometimes the root vegetables taste a little too “earthy,” and the imported fruit seems to be of the lowest available quality.

When the fruit’s good, it is very good indeed, but when it is bad, it is horrid. *

We also bought some Lebanese cherries which we need to try. Soon.

While we were walking home I made Andrew stop and take a picture of this tree because I thought it was pretty. It’s absolutely huge and is covered in bright red-orange blossoms. 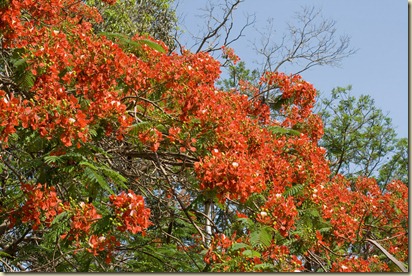 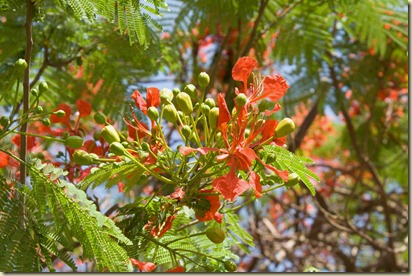 Today was a good day. It’s days like today that make me remember that living here isn’t that bad, even without a dishwasher, and that I’ll be able to survive another year.