Today was one of those busy Sundays. Andrew and I both spoke during sacrament meeting in our ward—my mom and Karen helped out with the girls, which was so amazing of them to do, not only because Miriam was such a handful today but, because both my mom and Karen had already sat through three hours of church at their own wards. Karen and Reid both spoke in their ward today and Emily played the cello for the special musical number.

As a finale to our Sabbath day, my brother Patrick was set apart as a service missionary for the Church of Jesus Christ of Latter-day Saints. He’ll be volunteering his time and talent down at the LDS Motion Picture Studio for 12 months. 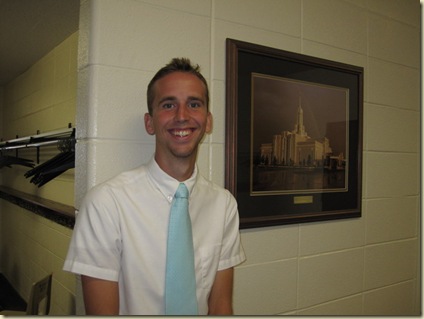 My mom and dad, auntie Judy and uncle Wally, brother David, sister Josie, and Andrew and I all came to support him. 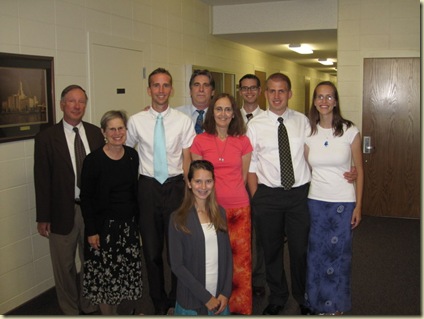 I thought it was funny that my mom and I both wore the same skirt today, though hers is orange and mine is blue. Josie has one, too—hers is purple—but she didn’t wear it today. My mom got them in South Africa when she was there for a conference last summer before she visited us in Egypt. If I was Andrew I would have either died of embarrassment on the spot or ran home as quickly as I could to change my clothes. But I’m not Andrew, so instead my mom and I just laughed that we wore the same skirt on the same day—besides, they’re different enough that I’m sure no one noticed except for us. And Josie.

We also got to visit with my mom’s cousin Marie, her husband Steve, and their son, Eric. They live in Ohio so we don’t get to see them very often—the last time was at my cousin Mary’s wedding nearly 5 years ago—but Eric will be attending BYU starting on Monday so they were in town “dropping him off” at university.