There are no strings on me!

For the past few days Miriam has been experimenting with bipedalism. At first it was unconscious behaviour. She’d take a spoon out of the dishwasher or a toy from the toy box with both hands, stand for a second, and then slowly lower herself to the floor without using her arms for support.

Then a few nights ago Grandpa was playing with her in the basement. He brought her upstairs and proudly announced that she had stood, unsupported, for three whole seconds.

Tonight Daddy was playing with Miriam while I did the dishes and he started yelling for me to come quickly, so I did because usually when he yells like that it means someone is throwing up or bleeding. Instead of being met with a big mess, though, I saw this: 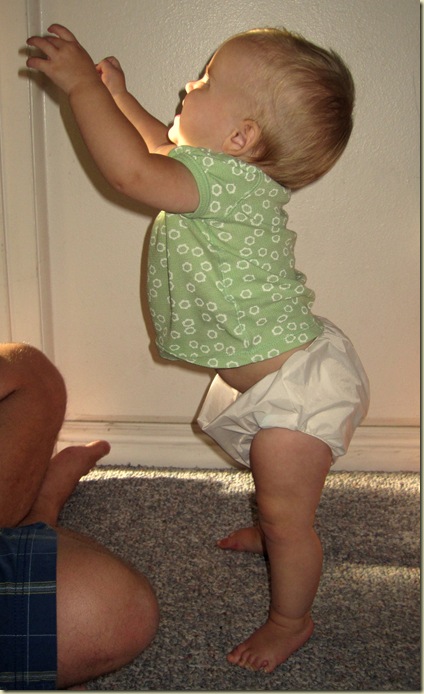 Little Memur-Lemur was balancing solidly on her own two legs, reaching for a pair of binoculars like a kitten batting at a string.

She hasn’t taken any steps yet, gratefully, though she is cruising the furniture, and she still isn’t too interested in walking while holding hands, though her interest in that is growing daily, so I don’t think she’ll be walking like 10 months like Rachel (thank goodness!).

It’s still just funny to see my little baby balancing like that—she’s not tied up to anyone, her arms are free, that’s the only way to go…there are no strings on her!