So, we went camping this weekend.  I think I’ve mentioned that already. Several times. Grandma and Grandpa’s BYU ward was having a ward campout at the Heber Valley Girl’s Camp and we kind of tagged along.

I was unsure of what to pack because the campground is up in the mountains at an elevation of around 8000 feet. We went camping a there few years ago (at Camp Esther) and it snowed—big time—so I packed much more than we actually ended up needing. It was relatively warm this year—I don’t think we even got a frost.

We stayed at Camp Bertha Stone Reeder and had a nice, heated cabin—at least for all the kids and married couples. All the students were in unheated cabins, which is still pretty luxurious for camping. We didn’t feel like we were roughing it at all! 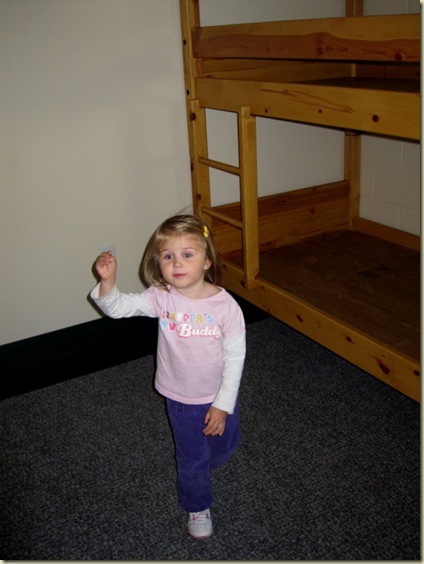 When we first pulled up to the camp, the hosts explained some basic rules to us, warned us about the wildlife (bears!), and told us there was a fire ban that may or may not be lifted. Rachel asked why there was a ban and we told her it was because the forest was drying out and dry things burn easily, that we didn’t want to accidentally start a forest fire.

“What about marshmallows?” she asked with a panged expression.

We told her we’d figure something out—we had a full kitchen with a walk-in fridge, a walk-in freezer, warming ovens, and other amenities not found in the layman's kitchen. She overheard us talking to Grandma about it later in the day and said, “But we can’t cook marshmallows or we will burn down the whole forest!”

(As it turned out, s’mores were made in the warming ovens after we put the girls to bed and Rachel was a little sore about that the following morning.)

When we first got there the girls wandered around the campground with various adults until we had all our gear into the cabin. Then all they wanted to do was play in the volleyball sand pit for a while until enough “big kids” got there to play a game of volleyball. Then we had to move, but we enjoyed it while we could. 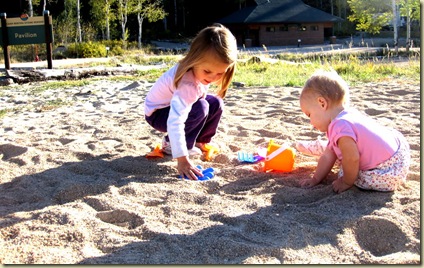 Both of the girls were taking their play rather seriously. I couldn’t get them to look at me or to crack a smile. It was all focus, focus, focus! 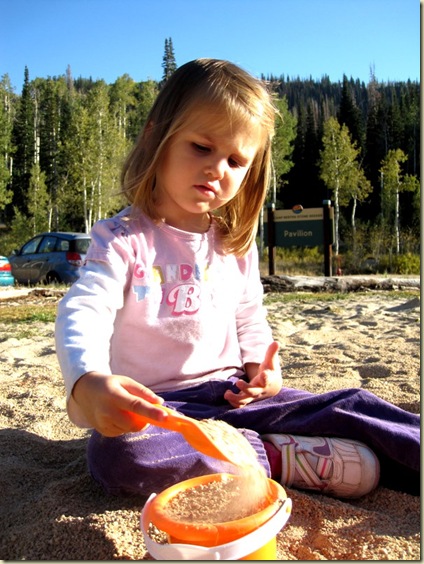 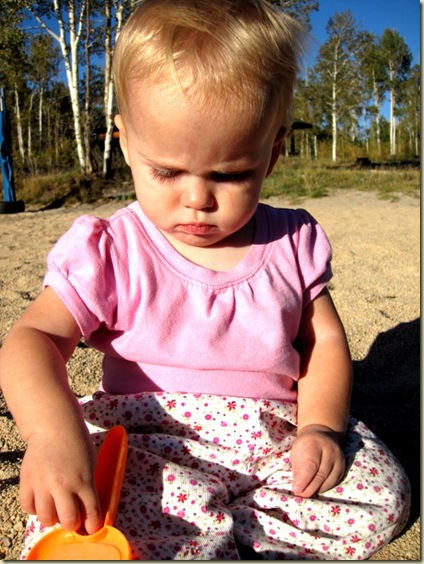 Watching Miriam play was especially entertaining. She kept getting up on all fours, crawling around for a bit, and then wildly digging sand with one hand, just like I imagine a puppy would. 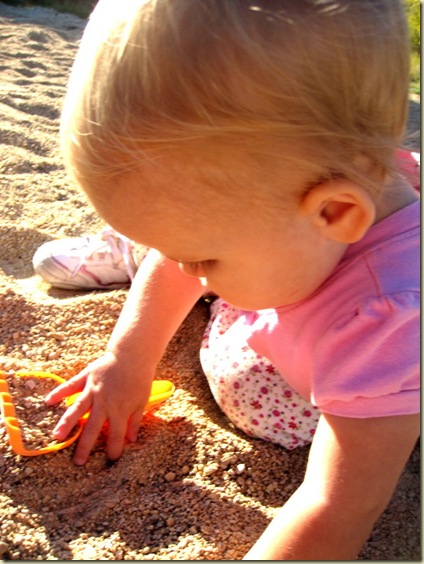 The girls were hungry before dinner so I took them on a walk—we brought along graham crackers—and I tried to get some good hiking pictures. Unfortunately, Miriam doesn’t believe in bribery yet and after I gave her a graham cracker she was too enamored with it to bother with the camera. 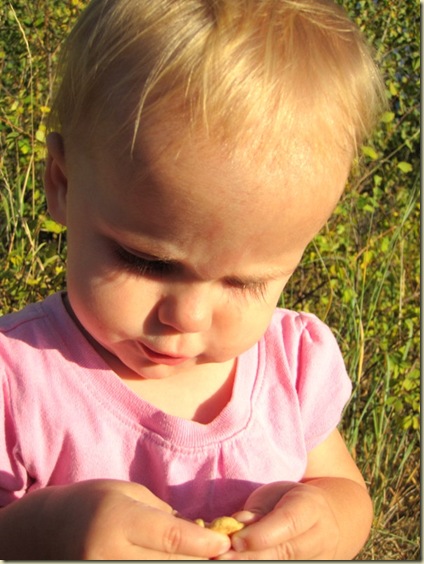 Rachel was easier to work with. I just told her I wasn’t going to give her another cracker until she smiled nicely a few times. She asked why and I told her that she’d appreciate it in the future. 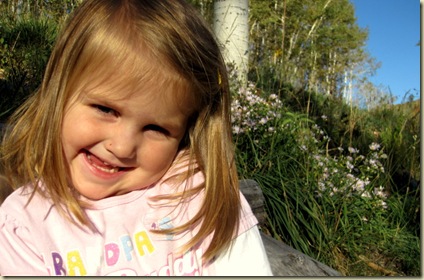 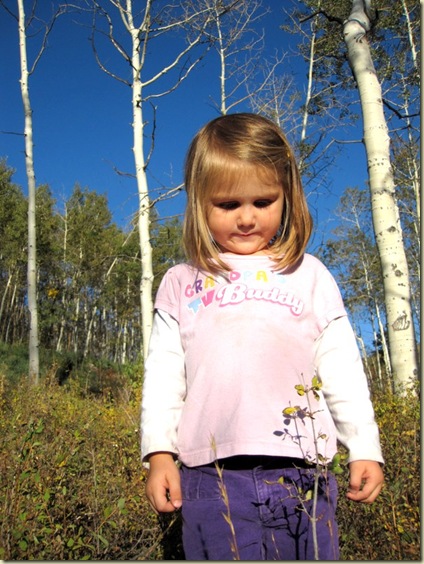 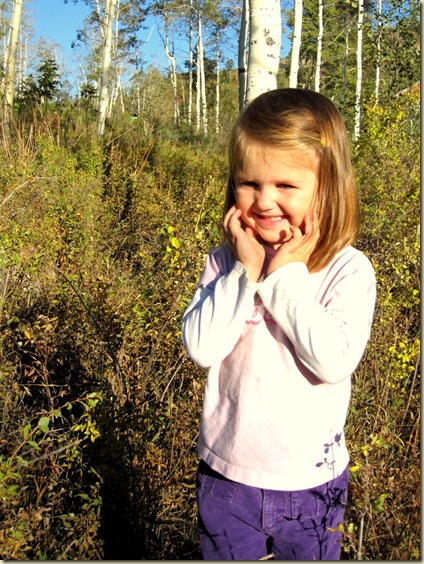 Truthfully this little bee was much more cooperative than either of the girls. 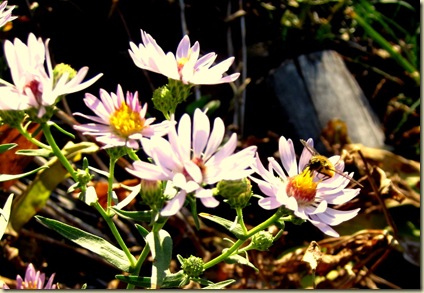 The scenery was beautiful. We’re really enjoying the seasons out here. On the drive up we kept seeing patches of beautiful crimson maple trees and hoped that our campsite would be adorned with a few, too. 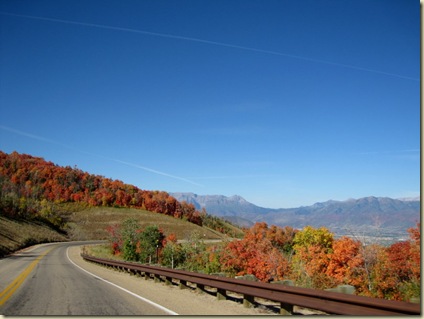 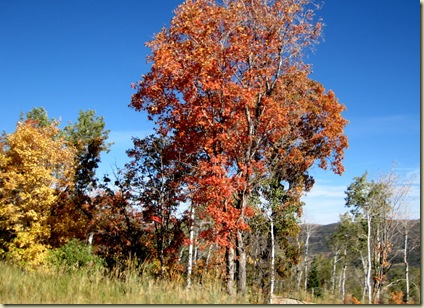 Unfortunately most of the trees we saw were either evergreen or birch which, while still beautiful, wasn’t quite what we were hoping for. 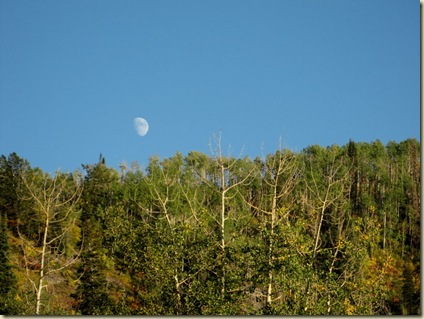 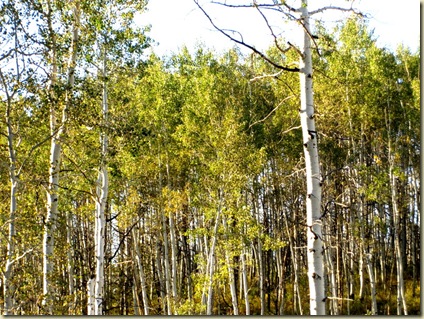 When I had exhausted our supply of graham crackers, which hardly worked to assuage our hunger and therefore did little to lessen the amount of whining spewing out of Rachel’s mouth, I decided to head back to the pavilion to enlist the help of Andrew.

He taught Rachel how to set up domino courses to knock over. They started with a straight line and moved on to bigger and better things like circles and the letter R. The circle worked. The R did not. 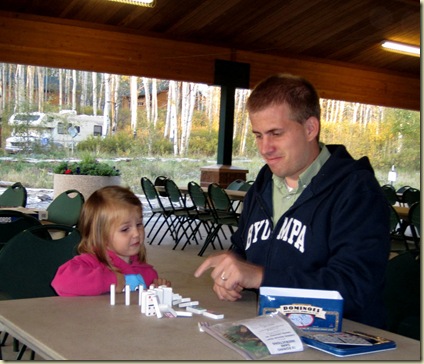 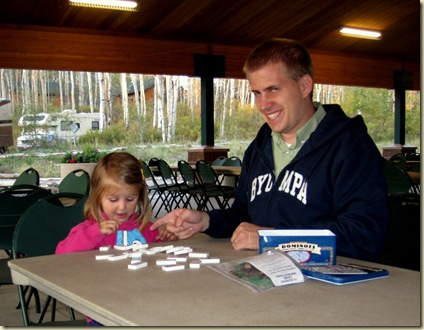 Obviously these two were getting a little silly with each other.

Dinner was a little late in the evening—Miriam was already fit to be tied that I hadn’t put her to bed yet so while I readied her for bed, Andrew and Rachel dined. When Miriam was nestled all snug in her portable crib I headed out to get some dinner for myself.

Sadly, she woke up before I had even finished my first helping.

We were sharing a room with another couple with a baby and their baby had woken up crying, which woke Meme up, and she was very perplexed—so perplexed, actually, that she refused to go back to sleep until around 4:00 AM.

Long story short, it was a long night.

To elaborate, Rachel was so excited to sleep in a bunk bed—even though she wanted to sleep on the bottom bunk, which is just like sleeping on a regular bed. The top bunk was too scary, she insisted, and I told her that was fine and pointed out a warning sticker that said that children under the age of 6 shouldn’t sleep on the top bunk, anyway. Still, the idea of having someone sleep right above her was somehow thrilling and she actually asked to go to bed, but only if I would lie down with her.

I agreed to do this and we three girls ended up in bed by around 9:00 that night. Unfortunately, Miriam would only sleep if she could feel me beside her and Rachel, likewise, would only sleep if she was touching me. This made our bed a little squishy and, to further complicate things, Miriam was quite insistent that her favoured mode of “touching” was nursing.

Andrew came to bed around 11:00, I think, and I got Miriam to doze off enough to actually put her down. Unfortunately she woke up about an hour later and, once again, refused to be separated from me.

At around 3:00 AM I woke Andrew up and told him I simply couldn’t handle it anymore and was going to go insane if he didn’t do something. Part of the problem was that I was afraid to make any noise at all—or allow Miriam to make any noise—because of the other baby sleeping in our room.

Andrew shook himself awake and took Miriam for a walk outside.

With a sigh of relief I collapsed back onto the bunk beside a sprawling Rachel, closed my eyes, and attempted to sleep.

Just as I was drifting off a one-word thought popped into my head: bears.

After that sleep proved impossible so, sock-footed, I sneaked out the door in search of Andrew and Miriam because, you know, if they had encountered a hungry bear I’d likely be able to fend it off for them. Or not.

Lucky for flashlightless me, Andrew had already made his way to the pavilion and turned on the light. There I found him rocking an inconsolable Miriam who, when she saw me, reached her arms out and cried, “Momma!” And that’s cute, even at 3:30 in the morning, especially because she hasn’t uttered a single “ma” in months. All her babbling has been “dadadadada.” What about me?! Finally…she knows my name and uses it.

Andrew and I exchanged stories about being worried about bears—he is just as paranoid as I am sometimes—and then I made him walk with me to the bathhouse even though there was a restroom right in our room in the cabin. Then we stood for a while in the still of the night and admired the stars—I haven’t seen a sky like that in years. It was stellar. Literally—while we formed a game plan.

We decided that I would take the extra bottom bunk—the one that had all our stuff on it—with Miriam, who obviously desperately needed her momma,  and Andrew would move down and sleep with Rachel, who was likely thrashing about in her sleep and screaming out, “No! I don’t want to!” because that is usually what she screams in her sleep (and, frankly, in her wakefulness). So we went back to our room and moved everything around by the dim, inconstant light of our cell phone, with Miriam fussing and lunging for it the whole time.

We were all settled in bed when Rachel flipped out. She had woken up and realized that Andrew was in bed with her instead of me.

Andrew got her calmed down pretty quickly after convincing her that he had moved down to the bottom bunk and that no one had moved her to the top bunk. I think it’s funny that she woke up lucid enough to recall the warning label on the bunk bed, disallowing the 6 and under crowd to sleep on the top bunk. She got her numbers a little confused, but still. I think if it had been me waking up my first thought would have been, “Oh, you’re here. Huh. Me sleep more,” not, “Oh, no! I’m breaking a rule!”

After that last outburst, and as the first hint of dawn filtered through the window blinds, we were finally, blissfully falling asleep. All of us.

Our considerate roomies tiptoed around when they got up in the morning to help with breakfast and left us sleeping. We slept until almost 9:00 and it was…wonderful, but somehow completely unfulfilling. Still craving sleep, we left camp as soon as we could, hoping to squeeze a post-camp nap in at home. Alas, our girls were completely wired the whole day.

We had a triple date to go bowling with Emily and her beau and Andrew’s parents that afternoon so we dropped the girls off at my parents’ house. My mom took them in the backyard to play in the shade because it was too hot to play at the park (in September, I know, fall is being generous) and Rachel remembered roasting marshmallows after hiking Stewart Falls.

“I have an idea…” she told my mom and somehow coerced her and Grandpa into roasting hot dogs and marshmallows in the backyard again (to make up for the fire ban in the mountains and the consequent lack of s’mores).

They were just getting started when we came by to pick them up so I opted to stay for the roasting while Andrew hurried home to finish his homework.

Aside from the complete lack of sleep, camping was a lot of fun. I’m so glad Rachel got to roast marshmallows with my parents, though. It was the perfect ending.