We went up to my Uncle Bob’s house yesterday for a family reunion. My Aunt Tami was in town for the BYU vs. Washington game (among other things) and it was decided that it would be a good time to get all of my dad’s siblings together with my grandparents. Naturally this included grandchildren and great-grandchildren, too.

Rachel was so excited to play with her cousins. Kelli brought matching shirts for all her kids so they could take family pictures and Rachel wanted so badly to be in the pictures with them, which is odd because recently she hasn’t ever wanted me to take pictures of her. There was plenty of picture-taking and cousin-playing going on. 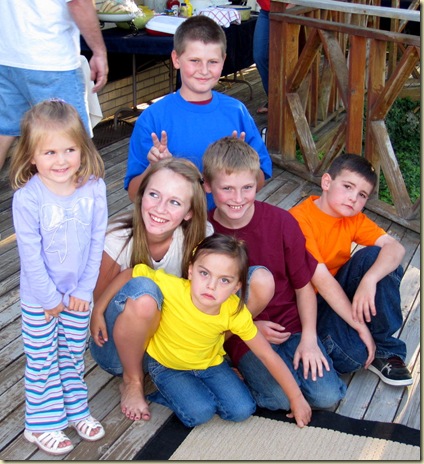 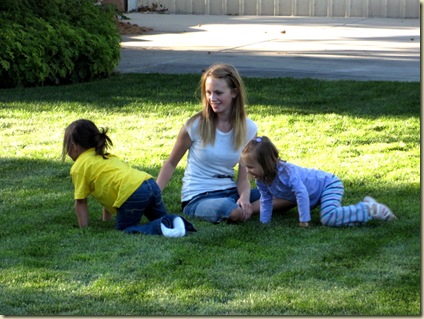 We had loads of food—Lisa made baked beans and sloppy joes and smokies and hot dogs; there were salads and cookies, too. I ate until I was stuffed while Miriam visited with various people and Rachel ran around with her cousins.

Miriam seemed particularly attracted to ncle Ken (Tami’s husband Ken, not my dad’s brother Ken). She crawled right over to his chair and insisted that he pick her up. I don’t blame her. I’ve always like Uncle Ken a lot, too. 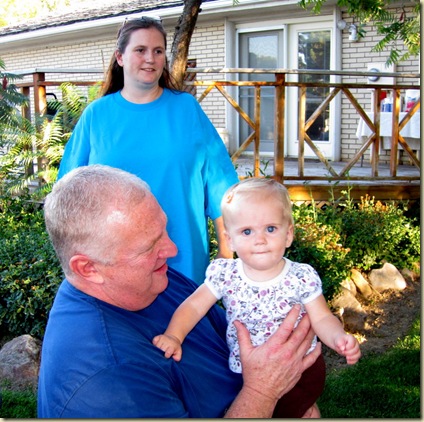 Once we had all the siblings together, we snapped a few family photos. My grandpa’s health has recently been rapidly deteriorating. He has Parkinson’s Disease and besides that, he’s simply getting old. He’s not at all the grandpa I remember from my childhood. I miss that man. This will probably be the last family portrait of Grandpa seated next to his beautiful wife with all their children together at the same time. 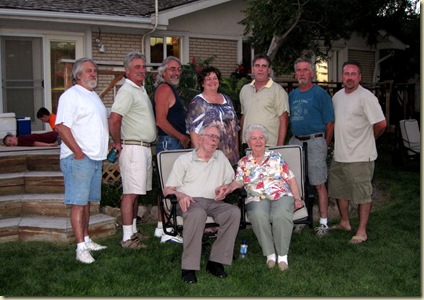 Kevin, Bob, Chuck, Tami, Dad, Ken, and Cory. My grandma sure had her hands full when she was a young mother—these boys always had her up and running, I’m sure. And my poor Aunt Tami, the sole sister of the family. That was a hard role to play, too, I’m sure!

My dad’s hair sure looks nice and dark compared to all his brothers, I’m just noticing. I think he’s the least grey out of all of them, except maybe Cory, but Cory is the (surprise) baby of the family and is much younger than everyone else. Nicely done, Dad; way to age!

Here’s my aunt, dad, and all my uncles with their significant others: 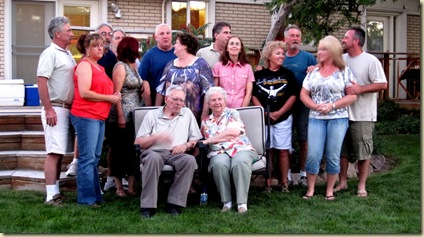 My pictures isn’t the greatest because I was competing with the real photographer for lens time so I just snapped a quick picture while everyone was getting ready for the real picture to be taken. I’m sure it will be much nicer than this one.

It was nice to see everyone that I haven’t seen for years. We visited much longer than we expected too and ended up getting home later than we planned which made for kind of a grumpy Saturday with Rachel, but it was well worth it!