This morning we went to a clothing exchange at BYU. I was hoping to score some winter gear for the girls but had no such luck. It was a huge event—when we arrived at the church parking lot it was packed and there was a line of people waiting to get inside. It was seriously like Black Friday or something.* To reward the girls for being so good while we dragged them around the cultural hall and dug through pile after pile of clothes we took them to the botany pond.

We brought some old bread with us and the ducks were very excited about this. Every time we’d throw a piece of bread out there would be a mad rush for the crumb—some ducks would jump up and snatch it right out of the air, others would peck at each other and quack loudly. Oddly enough it reminded me of the clothing exchange we had just attended—adults, mostly women, crowding around tables heaped with clothes, wildly digging through, searching for a pair of badly-needed pyjamas and exclaiming triumphantly when they were found. 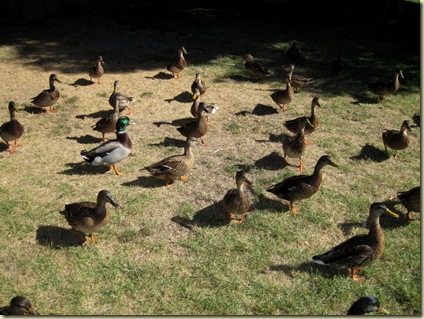 Only we were more nice about it than the ducks were because I noticed that a lot of people were helping other people find things—that’s what it’s all about. Whenever there was an, “Oh, man! I was hoping to find a pair of pyjamas, too!” someone would say, “I think I saw a pair over here!” It was really neat. And I found some non-blue-jean pants for Rachel—getting her to put on blue jeans is like trying to start a fire with a wet log. She detests blue jeans—and all pants with any button, zipper, tie, doohickey to keep them up. She’s a plain-elastic-waist girl, and that’s just fine.

She was terrified of the ducks. We pulled up to the pond and got out of the car. Andrew said, “I see the ducks.”

I told her these were wild ducks, so naturally there was no fence. Wild was the wrong word choice—it spooked her a bit. Still, we figured she was old enough to help feed them. She is perfectly capable of ripping off a piece of bread and chucking it at ducks. However, she was so petrified the whole time that she couldn’t remember to feed them. Instead she clutched her bread in fear. 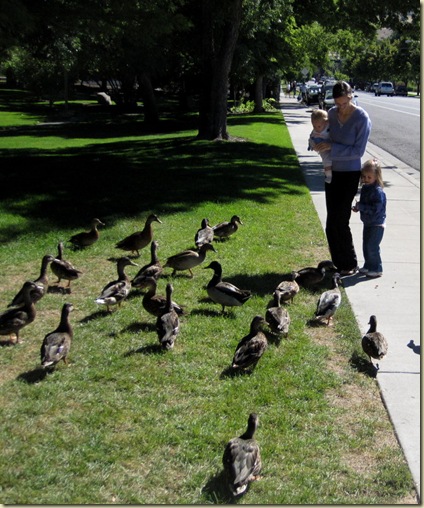 The ducks all had their eye on her bread and kept inching closer and closer to her. She’s pretty short—I guess they figured they could just reach up and snap a piece off without bothering her. But they did bother her, very much. They chased her around a bit and she really hated that but then Daddy showed her that she’s bigger than the ducks so she doesn’t have to be afraid. 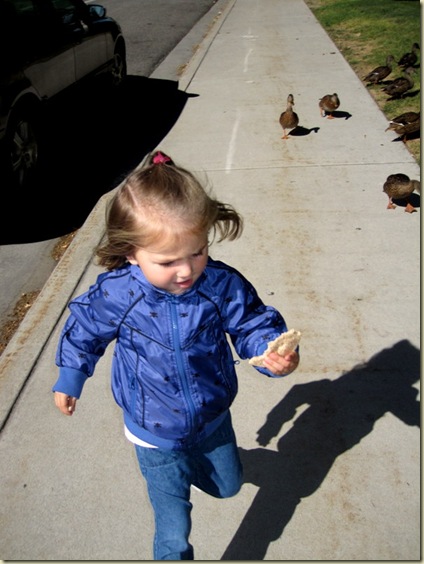 After she learned that (and had gotten rid of the bread in her hand) she spent most of her time running toward the ducks instead of running away from them. 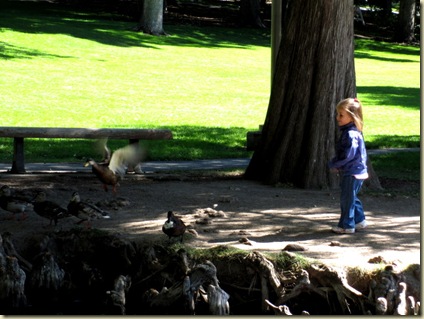 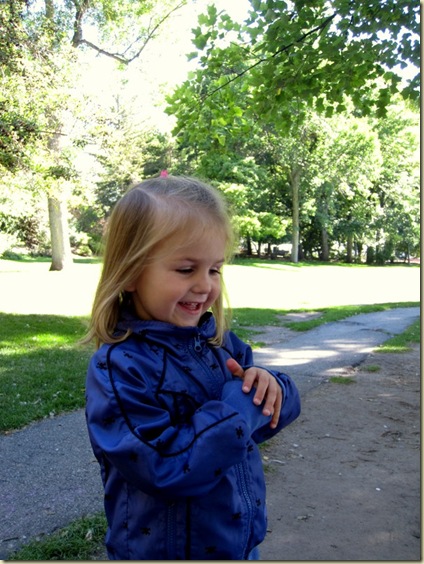 Miriam loved the ducks. Duck is actually one of her first words—she said it at the doctor’s office when we took Rachel in. There was an Ernie and Bert cartoon on and they were trying to find some sage duck who could answer the question of whether the duck or the egg came first and Ernie, of course, had his rubber ducky with hi. It was a weird claymation Sesame Street thing. Anyway…Miriam saw Ernie’s rubber duck and started saying, “Dut! Dut! Dut!”

I knew she liked the rubber duckies in the bathtub but I didn’t know she could say duck. She was saying it at the pond today, too. “Dut! Dut! Dut!”

She can also say “hello” and “mama” and “dada.” Mostly, though, she just babbles. It’s still funny to hear her use words the right way. Today at Stake Conference a lady asked if she could sit by us—Andrew was out of the room at the moment—and I said sure, but that we needed one more seat so she stepped over me and left a chair empty, sitting one seat away from us. Miriam looked up at her and said, “Ayo!”

“Umm…hello to you, too,” the woman said. “Is that what she said? Hello? She doesn’t look big enough to be talking yet!”

I’m pretty sure she is talking, though, at least a little, because she said the same thing when she saw Uncle David today and has said it several other times upon seeing someone for the first time. It makes sense because that’s what I say to her when she wakes up in the morning and after her naps. “Hello, baby girl!”

She found the ducks fascinating and alternated between laughing her head off and intently staring at all the commotion they caused. 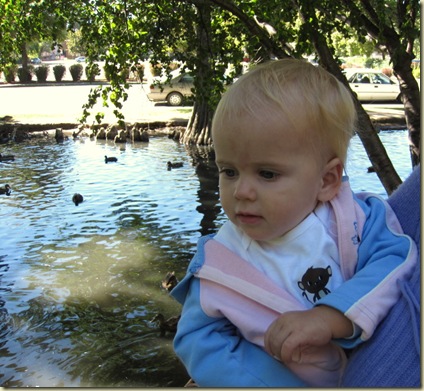 It was fun to have Daddy spend the morning with us. We’ve actually seen quite a bit of him this week, and that’s been nice. He even fixed the two-girl stroller for us (the tires of which I mercilessly popped by running over a bush full of thorns—we ended up just getting new inner tubes because each one had somewhere between nine and twelve punctures…oops). 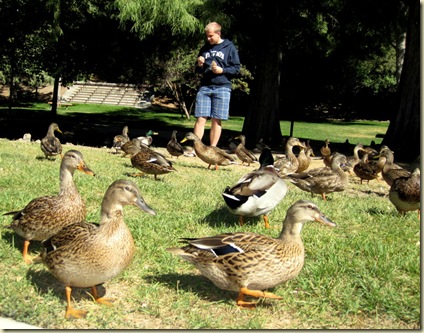 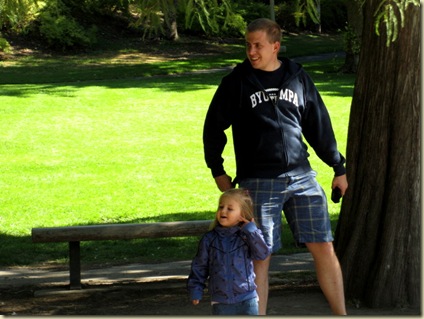 It was a good, productive morning and at the end of it all everyone was happy. The ducks were happy with their stale bread crumbs and we were happy with claiming some cast-off clothing for our own. I suppose the saying “one man’s trash is another man’s treasure” is really true. 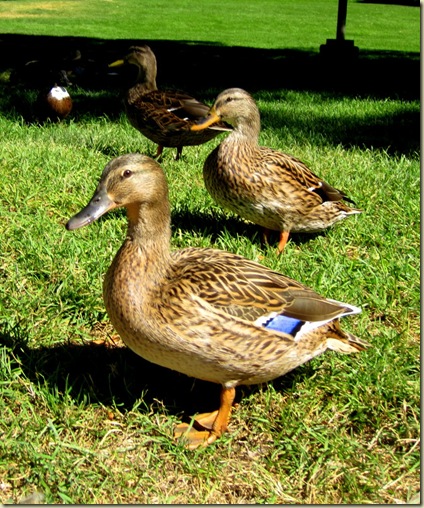 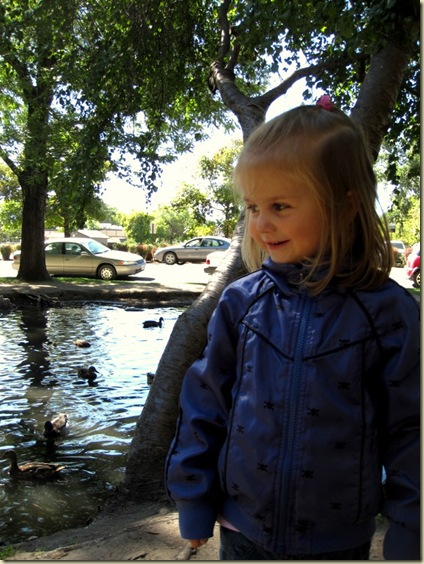 And speaking of outcasts, I took this picture completely by accident and almost deleted it, but part of me was really drawn to it so I kept it. I think it’s kinda trippy how everything is swirling except for that one solid tree trunk. I don’t know. 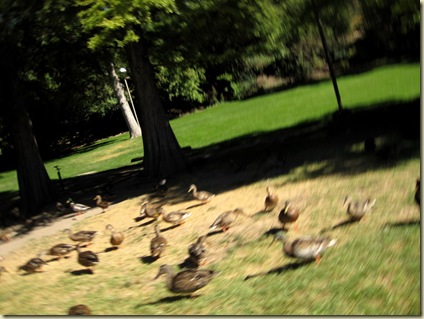 * I’ve actually never gone shopping on Black Friday, but I imagine it was comparable. No one died in the stampede when they opened the doors, but there was a stampede. I’ve never seen so many people so happy about free, used clothes all at once.