Now THIS post is about running (and other things)

On Saturday I went for a long run with Wendy--ten glorious miles down South Fork Canyon, starting at Big Springs Park, going past the Conrad Ranch, past South Fork Park, past Vivian Park, past Bridal Veil Falls, past Nunn's Park, and finally spilling out of Provo Canyon. It was so beautiful.

A dark storm cloud was threatening to break open over us at any minute but there was sunshine at our backs, illuminating the golden aspen and red maple leaves. It was stunningly picturesque. And it was fun to run through the canyon that my ancestors once farmed. I got to reflect a bit on the past, while running in the present (and thereby prepare for the future). It was an exhilarating run.


While we were running down South Fork Canyon we passed some guys running up the canyon. We waved and said "Good morning" and then kept running. A while later we stopped to stretch and they passed us going down the canyon. Then we passed them at the bottom of the canyon. Then they passed us at Bridal Veil Falls. Then we passed them... It just worked out that our paces were so coordinated that we'd pass every time either party stopped for a water break or anything. We started just saying, "Tag!" when we'd run past to avoid any socially awkward exchanges like "Good morning again..."

Speaking of socially awkward, we ran into a military drill at about mile six. We turned a corner and there were several barking commanders dressed up in camo with even more soldiers lined up in their sporting duds--army-issue grey shirts and black shorts--waiting to receive their instructions. They got the signal to go just as we were running past.

"We are going to get quashed!" I remarked to Wendy.

But we didn't. Instead of being ambushed and flattened by a stampeding wall of soldiers we were simply gently passed by dozens of soldiers one or two at a time. Apparently running speeds vary even in the army. Wendy and I dutifully kept running at our own happy pace and about fifteen minutes later victoriously crossed the finish line to cheers from the earlier finishers while the camo-clad commanders shouted, "Hustle!" and the timekeeper droned "15:23! 15:24! 15:25!" We weren't even the last ones to finish the race...er...drill. I know this because as we were disappearing farther down the trail I could still hear the timekeeper belting out "15:57! 15:58! 15:59! 16!"

It was a little unnerving to run a two-mile stint with the army but it was nice to know that many (probably most) of them were faster than us. I mean, if they're going to protect us they should probably be faster, stronger, and tougher than us. Still, it felt good to almost keep up with them, especially knowing that we had already run six miles. It did not feel good when they all stopped running and we had to keep running for two more miles. Still, it was a good diversion while it lasted.

My legs were absolutely throbbing by the time we reached our destination. My knees were feeling inflamed and my ankles felt like they had disintegrated and my thighs were screaming at my brain to let them stop and my hips felt like they had been glued on and I wondered if my blood had been replaced with lead because those last few steps were almost impossible to take. Other than that it was a good run. I was a little sore the next morning--so sore that I did a bit of yoga even though I don't usually "work out" on Sundays--but I was fully functional and could go up and down the stairs without wincing and everything.

Wendy and I talked about that on Monday while we were running at the track. After I went on my first run I was sore for weeks. I couldn't bend over at all--I would kind of drop Miriam into her crib (after her middle-of-the-night-feeding-that-we-haven't-eliminated-yet) because I couldn't even bend over that far. I wasn't sure I'd be able to move, let alone run, ever again. But I stretched out religiously and continued running (gently) until I felt better and now...? Now running two miles doesn't even make me break a sweat. I can run ten miles and be a little sore, but fully functional, at the end. And that's important to me. It proves to me that I'm physically fit, or at least more fit than I was three months ago.

Being physically fit is important to me--I don't run to lose weight because I clearly do not need to do that. And I'm fully aware of that, thankyouverymuch. I'm a little sensitive about my weight. Being this thin is no easy task. It's a genetic thing and I've always been this thin and I've always been given a hard time about it. I've endured nicknames as varied as Daddy Long Legs, Skelator, Human Toothpick, and Anorexic Freak. When I was in swim club other kids would poke my ribs and vertebrae since they protrude more than they do in other people--it was like they had license to poke me simply because they were mesmerized by my skeletal frame. Kind of how when you're pregnant everyone feels like they can stroke your belly just...because it's there? I don't know why, really. At an awards ceremony I was given a "skinny award" for being the only person my coach had ever seen with ankles so grotesquely skinny it made her, and I quote, "want to puke."

I was seven. And I did not appreciate it at all. I didn't feel like I had "won" anything. I felt picked on.

Anyway, I could go on for hours about how being thin isn't all it's cracked up to be but instead I'll just mention that being physically fit is important whether you are large or lean. And I will also mention that it's rude to comment about someone's weight and skinny people feel just as self-concious as fat people. Just sayin.'

And please, please, don't ask me why I exercise if I'm already skinny because, as I said, I don't exercise to lose weight. I exercise to be healthy. So the next time you say, "You don't need to run--you're already so thin!" I'll just tell you that you're crazy. And then I'll probably point you here so that you can learn that I'd be just as skinny if I didn't run because I'm simply a lean kind of gal. I can't help it. It's in my genes.

For proof, here's a picture of my Grandpa Conrad, lean as can be, in front of the house where he was born (in Provo, just across the street from J-Dawgs only J-Dawgs wasn't there, obviously) in 1915 (only this picture was taken much later than 1915, obviously). Relatives of his still own a ranch in South Fork Canyon, but I already mentioned that. 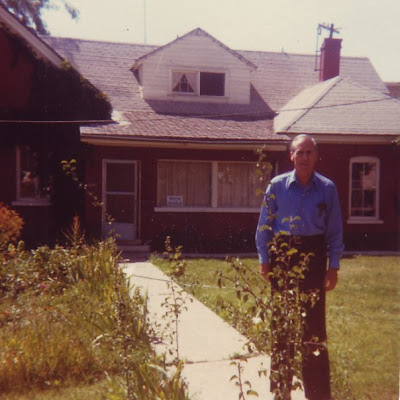 My willowy frame comes from him so if you have a problem with it you're going to have to take it up with him which might be problematic for you since he passed away about a decade ago. He probably loved watching me running alongside all those soldiers the other day. I was too young when he died to fully appreciate his humour but I'm sure he enjoyed the hilarity of awkward situations as much as I do. Why else would he have been such a dare-devil and prankster?
Anyway, I'm glad that's all off my chest. I don't know why it bothers me--I mean, I'm lean and a runner, like that's not a combination we've seen before--but lay off people! I eat as much as my husband if not more, so just relax. Maybe take a jog...
Posted by Nancy at 1:42 AM