Today is February 25th which means it's been exactly one month since January 25th. Obviously.

The reason it's significant, though, is that January 25th was the start of the Egyptian Revolution. I'll admit that that might not be significant for you, but it is significant for our family. So we decided to celebrate.

We got out every pot we own and made koshari. I know it doesn't technically need to involve every pot you own and when I learned how to make this from a very cute, elderly Egyptian woman she only used one pot. But we were already hungry when we started cooking and wanted the koshari to cook three times faster so instead of cooking the lentils and then cooking the rice and then cooking the noodles we went all in and cooked the lentils, rice, and noodles at the same time. In different pots.

We also made sauce and caramelized onions and hummus.

So we'll probably finish doing the dishes by sometime early next year. Thanks for asking.

The koshari was delicious, if I do say so, myself. Andrew was mighty proud of the onions. He found a tutorial on how to caramelize onions on Lifehacker (ironically on January 25th) and it turned out the best caramelized onions we've ever had. 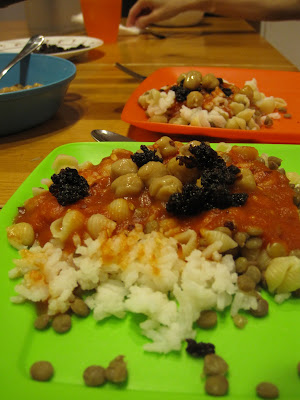 The girls weren't very interested in the koshari. Rachel refused to have hers mixed up and they both ended up just pushing it around on their plates. 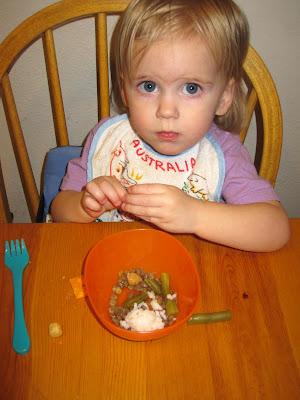 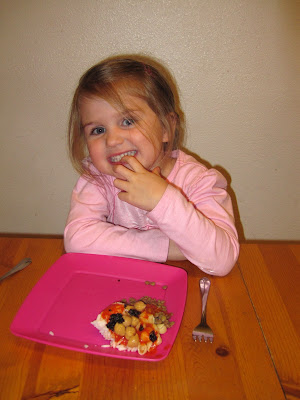 The hummus, though, was a big hit. 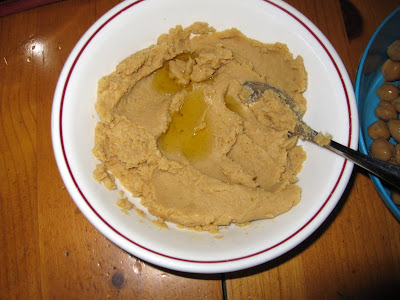 Andrew and I went to the temple this afternoon while Grandma and Grandpa watched the girls. We stopped on the store to pick up something we needed for the meal that we knew we didn't have at home—like onions and garbanzo beans and lentils (though we ended up having lentils so now we have a lot of lentils). Andrew saw some pita bread and so we picked up some of that and then rushed home to relieve Grandma and Grandpa.
In the middle of making dinner he lamented, "Oh, no! We didn't get hummus! I'll run to the store right now and get some hummus!"
"Don't do that," I said, "I can make you some hummus."
"No, you can't. We don't have any tahini."
"Honey, I can make hummus without tahini."
Tahini is just sesame seed paste that you use to make sesame-hummus so you can definitely make hummus without it, much the same as you can make hummus without sun-dried tomatoes.
I mashed up half a can of garbanzo beans in the food processor and mixed in a quarter teaspoon of cumin, one tablespoon of lemon juice, and about a teaspoon and a half of minced garlic. When that was nice and mushy I put it in a bowl and poured a bit of olive oil on top. Voila!
The girls could not get enough of it. Miriam shoved her bowl and cup away and kept handing me her fork so that I could fill it up with hummus. 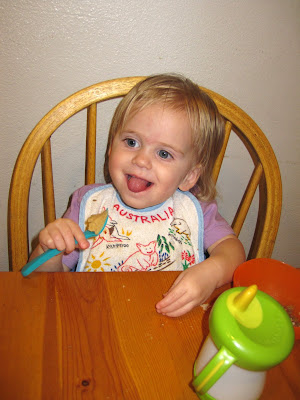 Rachel had hummus piled high on her pita bread, which for some reason she thought was called peanut bread. The whole evening we thought she was saying pita bread until she asked Andrew if he would pass her more "nut bread."

"Yeah. It's short for peanut bread," she said.

"Sweetie, this is pita bread, not peanut bread."

"This is pita. It's just flat bread. But you may call it khubz."

"I still don't know what pita is." 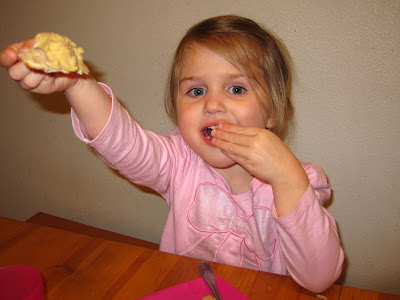 I think she wanted pita to be some sort of ingredient in the bread, like banana bread, zucchini bread, raisin bread, whole wheat bread. It was kind of boggling her mind that pita was the actual name of the bread.
We had pop with our meal, which we don't usually do now that we're back in the States. We often had pop with our meals in Egypt, though, especially when we ate sketchy street food. We had pop today because we just couldn't imagine eating koshari without it even though we knew our koshari was fresh and that nary a cockroach had set foot on it. It just completed the experience for us.
It also made us all a little prone to burping, except for Miriam. She didn't have any pop. Still, she rivaled us with her fake-burps.