Pretty as a princess 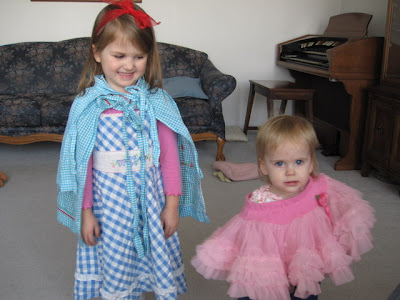 If I remember correctly Rachel was listening to the Mary Poppins soundtrack and claimed to be Jane Banks pretending to be Dorothy pretending to be Snow White. That's a lot of identities to sort through and it got to be rather perplexing for me because whenever I would try to play along I would invariably call her by the wrong name and she'd throw a fit. 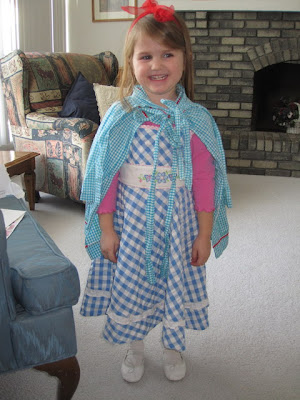 "I'm not Dorothy! I'm Snow White!" she'll proclaim and then five minutes later when I try Snow White she'll yell, "I'm not Snow White! I'm Jane! Why can't you ever remember these things?!"
At some point I stopped trying and resorted to "Hey, you! With the cape!"
I had quite the time figuring out the cape thing.
"Hey, Mom! Can I have a cat so I can be like Snow White?" she asked.
"A cat? What do you need a cat for?" I asked.
"Ummm...not a cat. A cap!"
"A cap? Snow White doesn't wear a hat and I already tied a red ribbon in your hair. What more do you want?"
"A cap."
"Go look in the dress-up box."
"There are no caps in there."
"There are plenty. Go see."
"Mom. We don't even have a cap!"
"Rachel, we have so many hats it's not even funny."
"Why are you talking about hats?"
"Ummmm...aren't you talking about hats?"
"No! I am talking about caps!"
"Tell me about this 'cap.'"
"You know.... It's what Snow White has on her shoulders and it flies behind her when she walks."
"A cape?"
"Yes."
"That I can do."
I tied one of my mom's childhood aprons around Rachel's shoulders and she wasn't quite satisfied with that, so I tied a second one on and that did the trick. She was now fully caped, although she spent the rest of the day asking everyone to admire her cap.
Miriam chose to dress up in Rachel's tutu; she adores Rachel's tutu. Rachel said that Miriam was being Sleeping Beauty and that she was being Snow White. I just agreed with her instead of pointing out that two minutes prior she had told me that she was Jane. 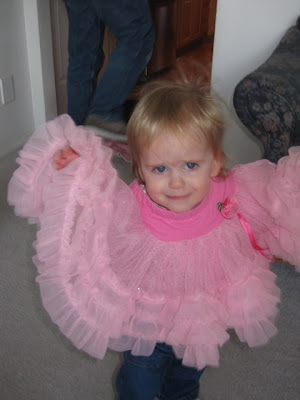 I'm not sure why she looks so terrified in this picture. 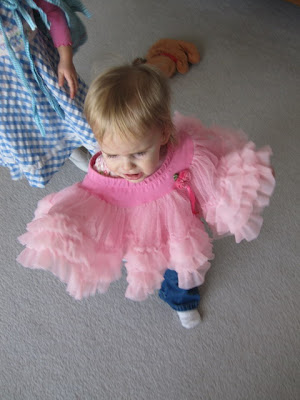 Oh, no, wait. Could it be because she was being chased by Rachel/Jane/Dorothy/Snow White? 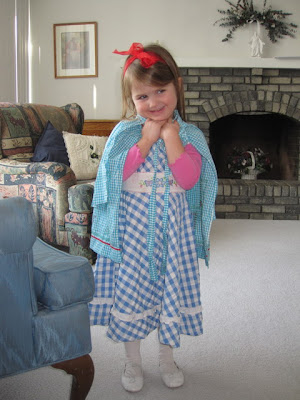 Not that this darling girl would ever cause any distress to her little sister. Oh, no. Not her.
I finally got a happy picture of Miriam when Andrew and I were hugging in the hallway after he got home from school and she decided to join in on the embrace. 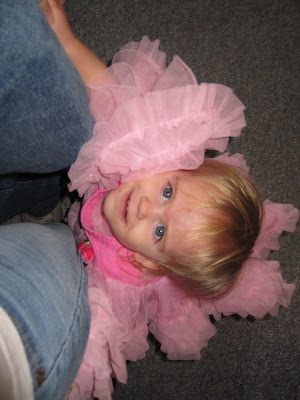 Perhaps they're both just pretty silly.
Posted by Nancy at 1:25 AM