This weekend was a four-day weekend for Andrew. Monday was a holiday since it was almost George Washington's birthday—his birthday is technically today but presidents day never falls on his birthday anymore, which I guess is fair because we've had a number of good, great, and not-so-great presidents who, I'm sure, would also like to be honoured.
Andrew didn't have classes today and was, instead, supposed to spend the day looking for internships. That's right, folks, a whole day dedicated to looking for internships. I won't even start complaining about how unfair it is that the MBA students get a whole stinking week to do the same thing. Instead I will be graciously thankful for the one single day that the MPA students get off.
Last night I spent my time editing several application essays down to 250 words. If you knew how easily my husband's papers turn prolix then you would understand what a chore that was.
He spent the morning doing homework, but in honour a day well-spent applying for several internships we took the afternoon off to spend some time together as a family. We have passes to Trafalga so we thought we'd go mini-golfing at the ever-patriotic fun center in Lehi, it being George Washington's birthday and all. 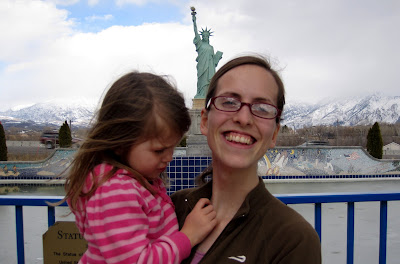 Unfortunately the outdoor arena was closed so we weren't able to go on the Mt. Rushmore Roller coaster or mini-golf our way past the Statue of Liberty or even ride the carousel or bumper cars. 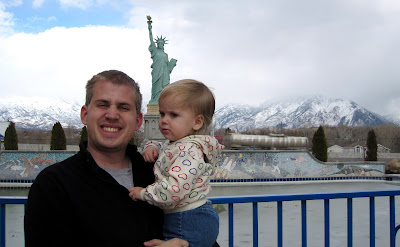 Instead we spent our time indoors.
They have a cute mini-golf course...on the third floor. We had no idea where to find it and had to find someone to help us. Once we got there both of the girls pitched a fit about being in the dark. The course was painted with neon paint and they had black lights on to make everything glow. It was very effective, as you can see from this shot of a volcano and very blurry baby: 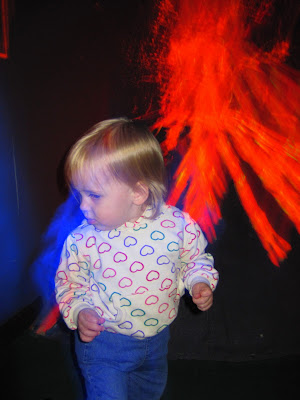 It was so effective that I golfed while holding Miriam and the diaper bag because every time I put the baby down she looked like she was about to suffer a hernia or something. 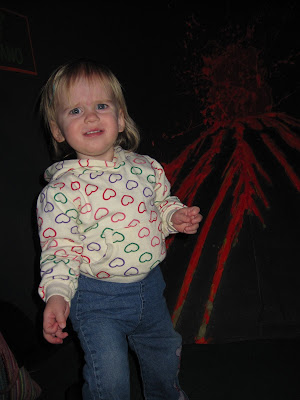 Rachel eventually admitted that being in the dark, surrounded by glowing sharks, scuba divers, and volcanos was actually rather neat. She golfed a good game. 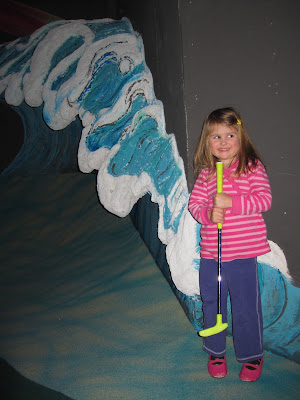 When we were finished with our game of golf we went back downstairs to return our clubs and ride a few amusement rides. They have two inside rides: The Frog Hopper and the Pirate Ship. Rachel rode the frog ride twice and the pirate ride about four times. She was in amusement park heaven, though she would not go play in the kids' park. 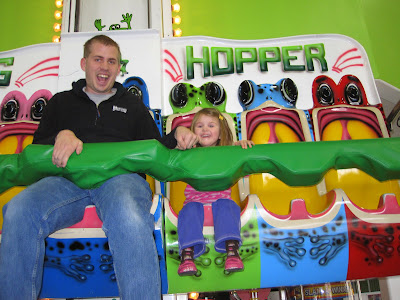 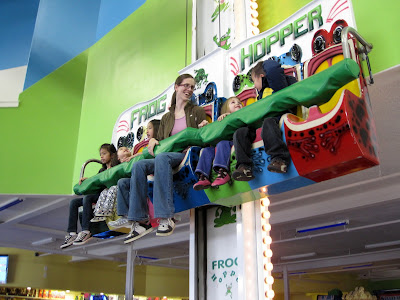 I was a little disappointed with the play park, anyway, because online it says, "Need help keeping track of the little ones? Trafalga offers the play park free to make everyone's visit more enjoyable." Now, maybe I'm just babysitter-happy and am too quick to assume that everyone is always offering to watch my kids but it sounded like perhaps it was like IKEA's Smaland—a place to leave your little ones while you go off and have a fun grown-up time: play some lazer tag, perhaps, or go rock climbing, or (as in IKEA) shop for furniture.

Unfortunately, no. It isn't like that at all. They let your children in but they must have adult supervision while they're inside playing so you can't go rock climbing with your husband at all because one of you still has to stay behind to tend the little ones.

And if your little ones are like my little ones then they think the "play park" is lame because the adult supervisor is not allowed to play on the equipment with the little one. They just get to sit and watch the kids play. That made my kids not even want to go inside. Who wants to go play by themselves when they can force their  parents to ride the pirate ship over and over again until they feel like puking?

We still had a good time, in spite of the setbacks, and we are definitely planning on returning in March when the outside portion of the center opens. We're also planning on heading back out there to have a date night—but now we know we'll need to find a babysitter because the play park won't do much in the way of allowing an actual date.

It was nice to pretend, at least for an hour, that life isn't 100% about homework.

Thank you, George Washington, for being born in February so that we could have a mid-winter vacation.

And thank you, MPA program coordinators, for giving us an internship day.
Posted by Nancy at 8:21 PM