We decided it would be fun to surprise the girls, which was harder to do than we thought.

Have you ever tried to make plans for visitors to come without ever mentioning aloud that visitors are coming? It's difficult. But we pulled it off.

After school on Tuesday I had the girls busy doing chores all night. They cleaned their bedroom, their bathroom, helped tidy the kitchen and the living room, helped fold and put away the laundry, and did a million other things. I worked them hard, all under the guise that Daddy, who had been "at school," was going to pick up pizza on his way home if we could have the house clean for him.

In reality Andrew wasn't "at school" but was at the airport picking up his parents. He really did stop for pizza, though, and came to the door with pizza in hand, leaving his parents sitting in the van.

"Pizza!" the girls screamed giddily when he walked in.

"Let's set the table," I instructed.

They ran to the cupboard to choose their favourite plates and were just getting into the silverware drawer when the doorbell rang. Naturally, they raced to the door to see who could get there first and flung it open and there stood... 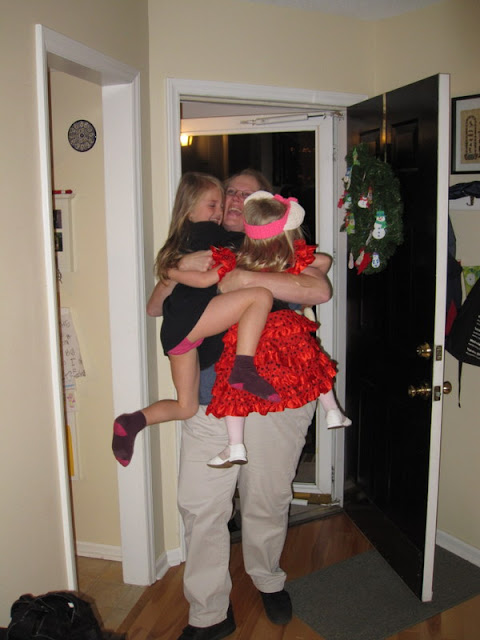 Oh, and Grandpa, too. 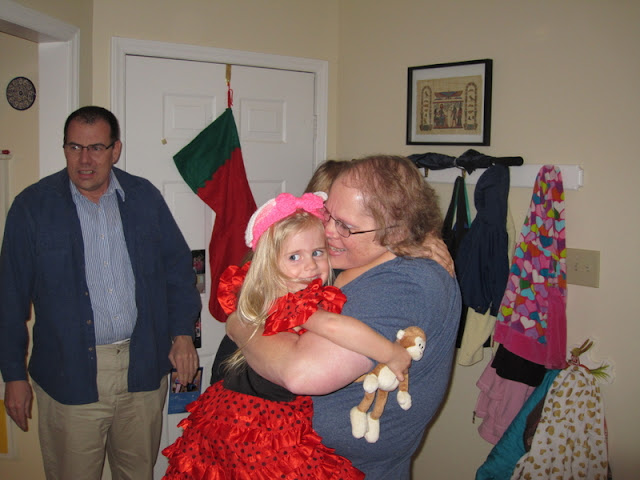 There was much shrieking and laughing (and perhaps a few happy tears) before dinner.

Everyone enjoyed dinner—even Benjamin, who had his first taste of rice cereal. He's tried a few things prior to rice cereal (I let him suck on a carrot...and on some broccoli...and a pear piece) but those were stop gap measures until we could pick up some cereal and start him on solids "right."

He was actually pretty offended when I put the spoon in his mouth the first time but he warmed up to the idea of cereal quickly (even if he did more spitting out than swallowing—drool was pooling up in the spoon). 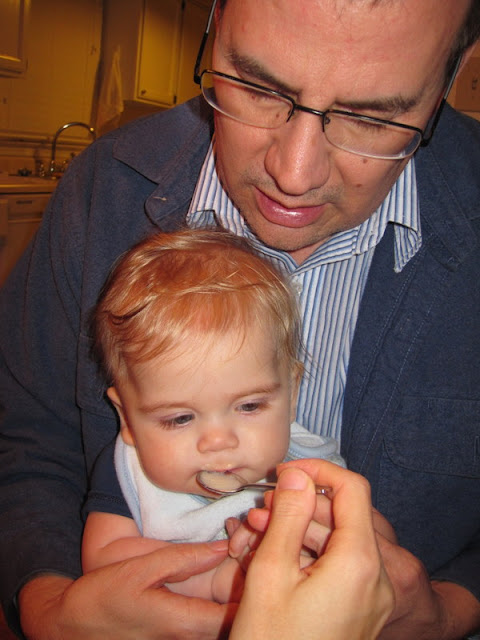 I gave him cereal again today—that's probably why it takes me so long to wean my kids because I'm like, "When did I feed them solids last? Oh, four days ago? Maybe I'll feed them again." He gobbled it down like a pro...I suppose Tuesday gave him enough experience to know that whatever was on that spoon was good and he shouldn't refuse it. 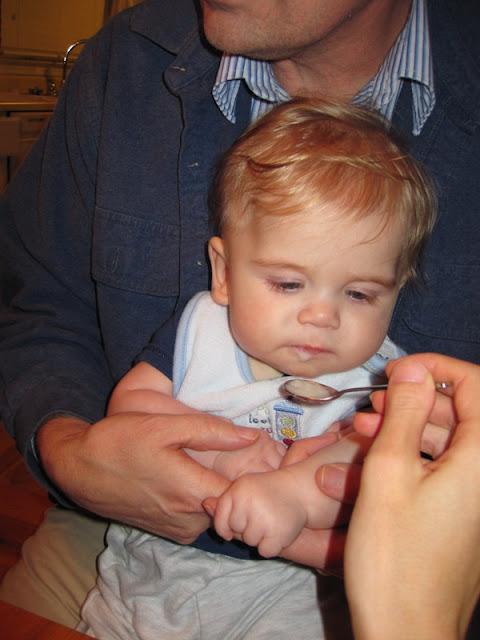 It was nice to have so many adults around to entertain Benjamin while we took turns eating. He doesn't really like sitting in his chair. 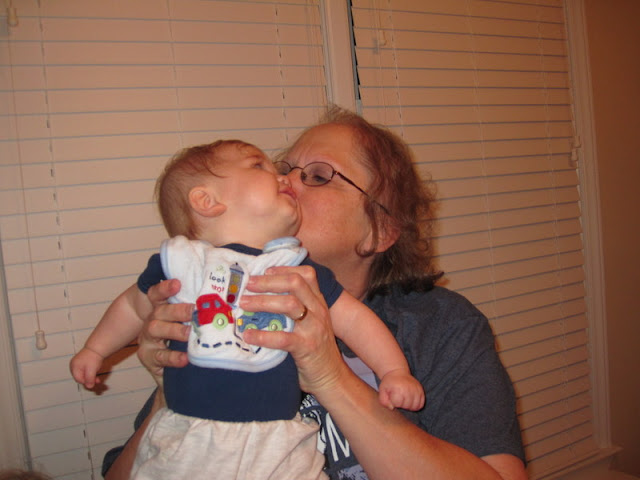 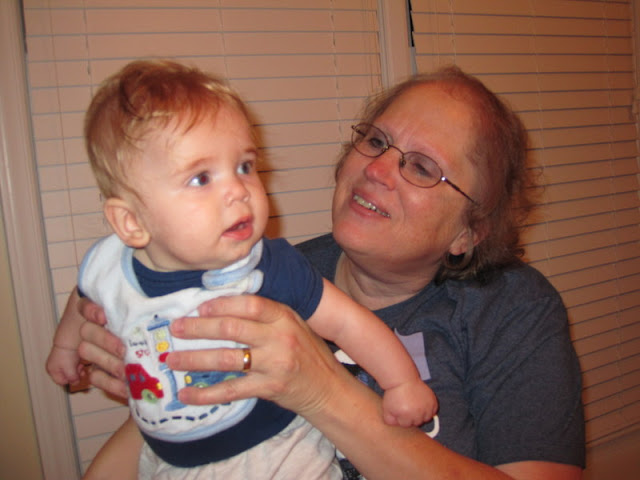 He was a little nervous about having these two strangers in his house (not really upset by their presence, just confused). He tuckered himself out keeping tabs on them—he kept looking at Grandma and then at Grandpa, then Grandma, then Grandpa—and he fell asleep without pyjamas or stories or singing or rocking or nursing or anything. 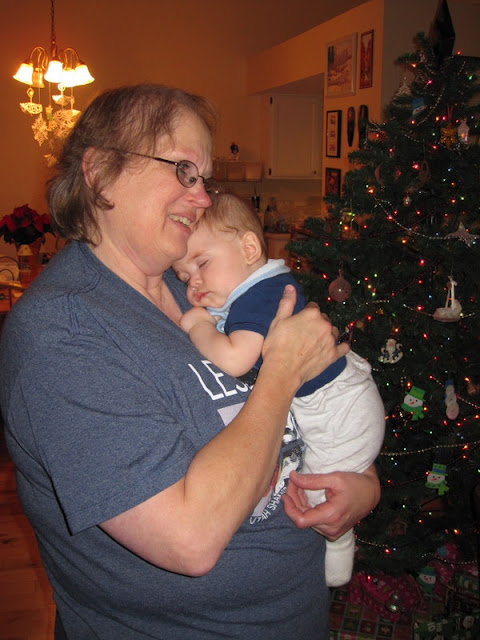 He was still rather confused when he woke up in the morning and they were still there. 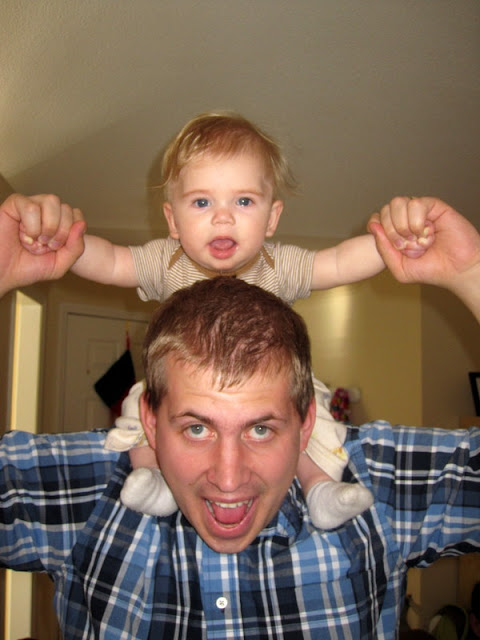 Miriam was confused about it as well. "Are you going to stay for three sleeps?" she asked Grandma.

"I am going to stay for fourteen sleeps!" Grandma told her.

"Wow!" Miriam said; fourteen is an inconceivably large number for her.

So far we've mostly been bunkering down at home while Rachel's been finishing out her school week. We succeeded in getting Grandpa hooked on the game Draw Something and have spent quite a bit of time sitting around with our little computing devices sending pictures to each other and laughing about our lack of artistic ability. 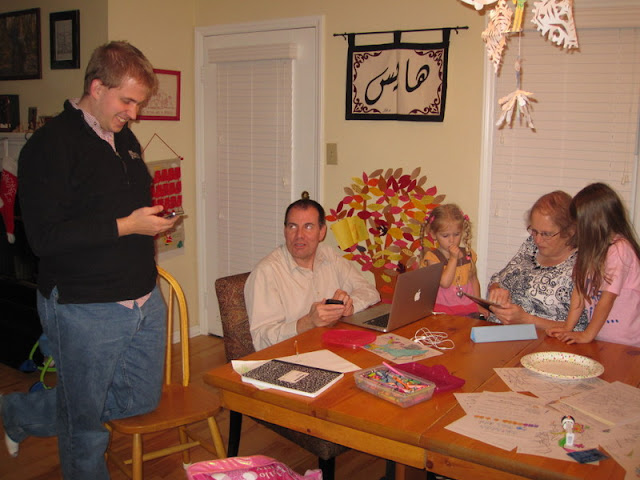 Grandma and Grandpa took the girls to a wedding reception (which Miriam kept touting as "a celebration!") and went to the park with Miriam while Rachel was at school one day. We've been playing lots of games and Grandpa's been putting on Christmas shows before bed every night, which the girls have really been enjoying. 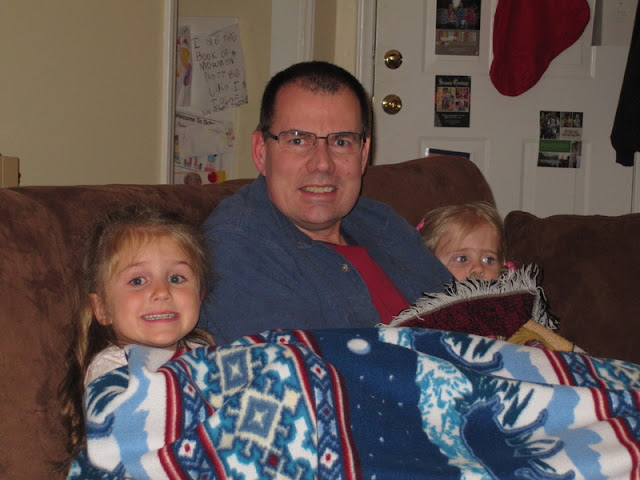 Grandma and Grandpa also helped watch Benjamin and Miriam while I went to Rachel's school to help with her winter party. Her school is permanently on lock-down now so even after I checked in at the main desk I had to knock on her classroom door because all the classroom doors are shut and locked all the time now. I didn't mind waiting out in the cold one bit if it meant helping the teachers and students feel a little bit safer.

All in all we've been having a great time. We're so happy to have Grandma and Grandpa visiting us!
Posted by Nancy at 10:58 PM