On Christmas Eve morning we were all lazing around—most of us were in pyjamas and the girls were watching The Santa Clause—when our home teacher stopped by with his wife, bearing Christmas gifts for the girls. We knew he was coming and we knew he had a gift for the girls; we just didn't know the gift would be so perfect. We opened the door and the girls' jaws dropped, for there stood our home teacher, laden down with two hot pink trunks full of dress ups!

Each trunk had three different dresses, two pairs of shoes, a wand, a crown, and some costume jewelry. Miriam immediately stripped down to her underthings, threw on one of the dresses and pranced around the house like the happiest child on earth. 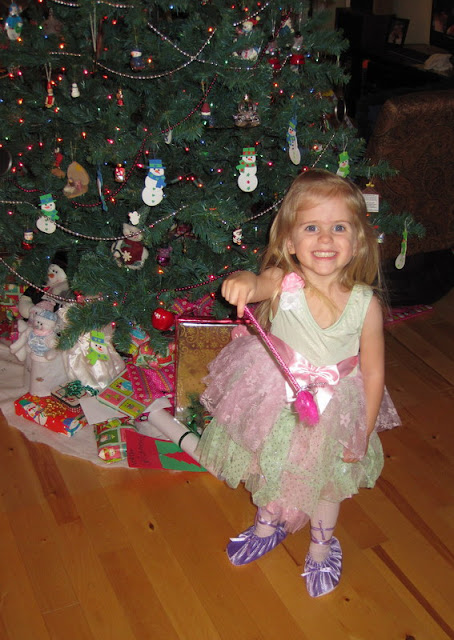 Rachel was a little disappointed when she pulled out the dresses to find that they were a little on the small size for a girl her age—the target age range, according to the packaging, is 4–7 but they fit Miriam (who still wears 2T/3T) perfectly and were way tight and short on Rachel (who wears 5T)—but she consoled herself with the trunk. which, she said, was perfect for packing her things for Hogwarts. 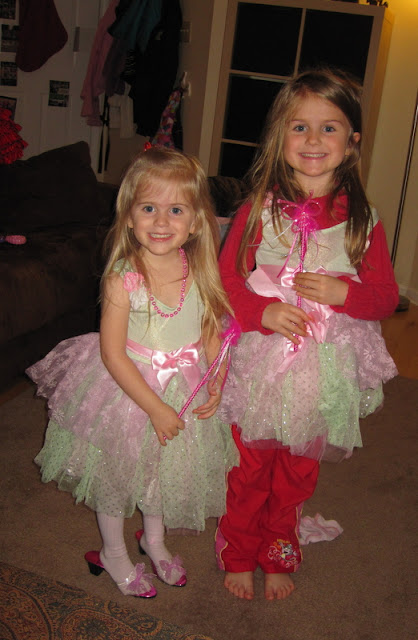 The girls were in and out of dress ups for the rest of the day (below Rachel is wearing a dress Naanii gave her last year). 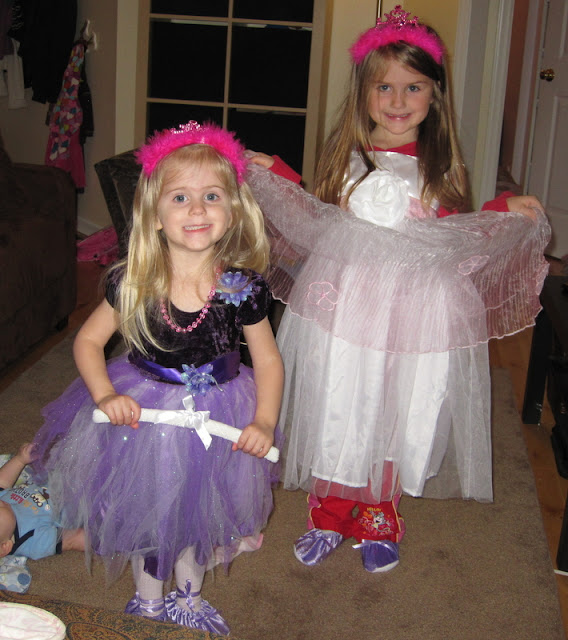 Early in the afternoon Santa drove through the neighbourhood again, delivering candy canes (and being extra careful about whether or not he was about to run over any toes). Instead of a white Christmas we had a wet Christmas; our sock-clad girls ran out in the drizzle to greet Santa and get yet another candy cane from him (and then turn and run away as fast as they could). 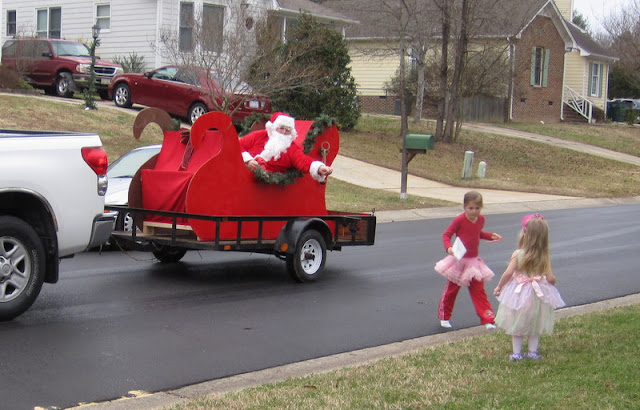 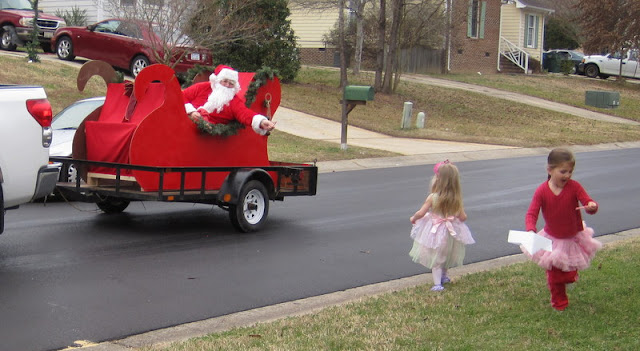 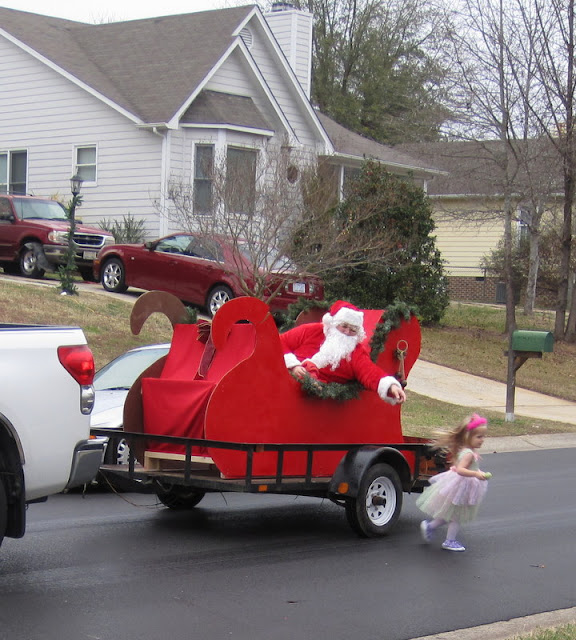 Once inside, Rachel declared it to be craft time. The night before she came out of her room at 9:45 to ask if I could teach her how to weave (and then stayed and played "Danger 13" with us until far too late). I told her that we'd worry about weaving "tomorrow" so when she brought it up again on Christmas Eve it was tomorrow.

"I want to weave a Christmas basket," she pleaded after we'd already cut out a billion snowflakes and I was done (done, done!) with scissors and papers and crayons. "You said we'd worry about it tomorrow," she reminded me. But that's my answer to all of her random late-night requests—we'll worry about it later...

It was Christmas Eve, though, and so I thought up a Christmas Eve basket that we could weave together. It's truthfully a Valentine's Day basket that I learned how to make in grade four, but it worked just fine for Christmas as well.

Here's Rachel showing off her woven Christmas basket (and her elf hat): 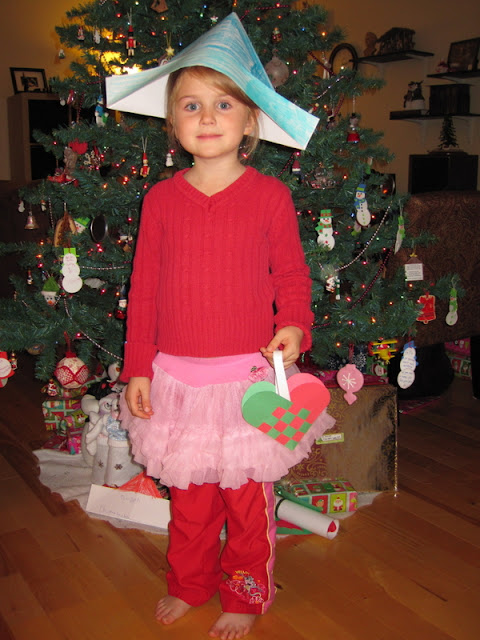 Rachel made elf hats for both herself and Benjamin. She started out wanting to make one specifically for Benjamin and asked if I would help her, but we'd just finished the Christmas baskets and I was so done with crafting (did I mention that?) so I told her to figure out a way to make him a hat.

She got out some green construction paper, sat down at the kitchen table, and cut out a teeny, tiny triangle. "That's not going to work," she sighed dramatically.

"Figure out a solution," I called from the kitchen where I was doing something...productive...maybe.... Like sneaking a cookie or something...

The next thing I know she's moved her work station into the living room where Benjamin had moments before been happily kicking around on the floor. When I stopped her she was holding the green paper on his forehead and was poised with the scissors, ready to start cutting the hat to his size.

"Whoa! Whoa! Whoa! No! Stop! Bad idea!" I said (perhaps with a few cookie crumbs spraying out of my mouth). " Put the scissors down, chicky! You can trace your brother's head with a pencil to see how big it is but you're not going to cut around his head freehand. No way."

She slumped back to the table like a gorilla, her knuckles nearly dragging on the floor.

"Then I just don't know how to make a hat for Benjamin!" she moaned. "It's all I want to do today!"

Right...besides asking me to teach you how to weave? It was Christmas Eve, though, so I took a few deep breaths (hoping there were some particles of patience floating around that I might swallow) and folded a simple hat out of a large sheet of paper.

Rachel decorated one side as Santa's hat and the other side as an elf hat. Here's Benjamin modeling the Santa side of things: 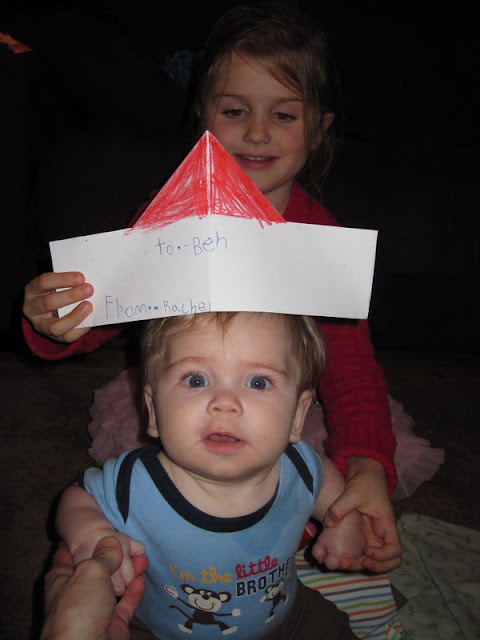 And here's Benjamin and Rachel as elves: 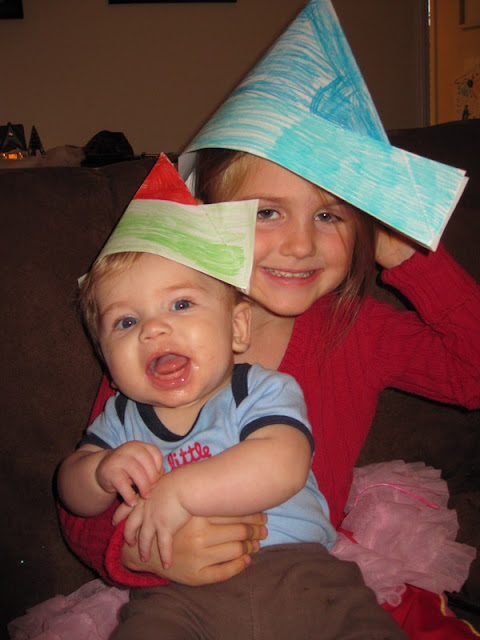 Miriam hopped into the picture before realizing that *gasp* she didn't have an elf hat! 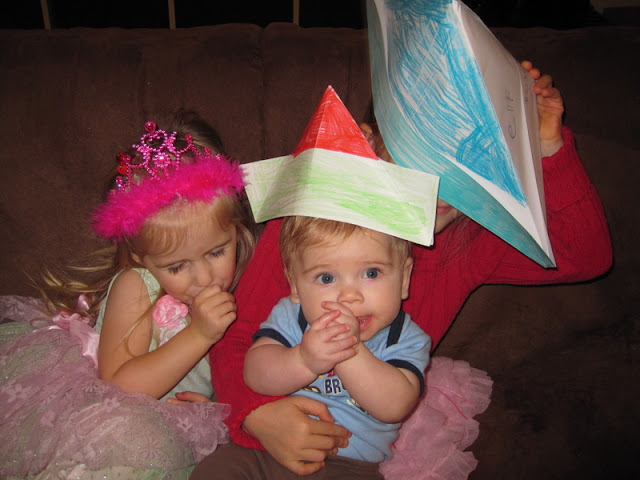 So we made another elf hat and then figured out a way to secure them snuggly under our chins: 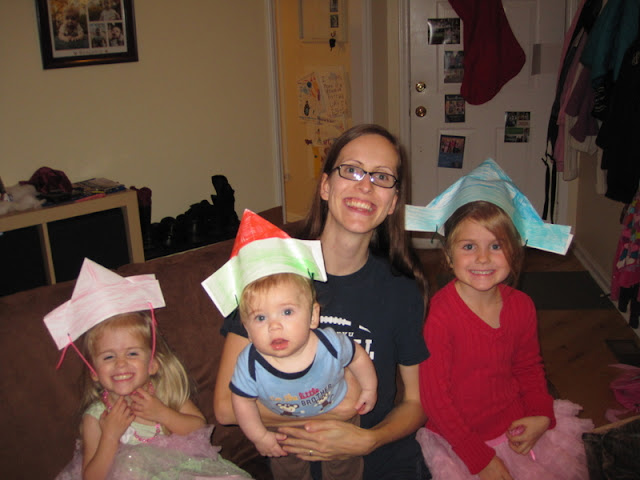 You might have noticed that Rachel wrote "elf" on her hat (that was another movie we watched on Christmas Eve). She was pretty proud that she spelled it all by herself but she was even prouder when she realized that elf begins in 'el' and Rachel ends in 'el.' Rachelf! So exciting!

We had dinner (and singing) with the Rogersons. Rachel chose to sing Sleep Little Jesus, which is one of the Christmas songs the primary children learned this year. No one else at the Christmas Eve party was in primary so no one knew it besides her but with Sister Rogerson at the piano and enough copies of the words floating around the room we were able to sing it together. It's a beautiful song; I wonder why we don't sing it more often.

I was surprised that Rachel didn't choose The Little Drummer Boy. She likes that song a lot—she learned it from a Christmas CD I recorded with my mutual group years and years ago. Unfortunately, a group of grumpy, untrained teenagers in a dumpy, homespun recording studio didn't yield the best results. Our CD was okay...but certainly not great. It's a little tinny and scratchy and many of the singers are mumbling their way through the songs.

We were driving home on Sunday evening (from the "Biscuits" house) and Rachel and I were singing Christmas songs in the backseat.

Because I totally made it "for her" when I was fifteen years old. I'm that much of a forward-thinker.

"But those are silly words!" she argued.

Because "ruffle bump bump" is better?

She's still not entirely convinced of the new lyrics I've been trying to get her to sing; not that it matters because she's now listening to the Christmas CD Emily and Morgan sent us. Andrew switched out my CD with Emily and Morgan's CD from last year a couple of weeks ago and Rachel came into our bedroom sobbing.

"You didn't even ask me if you could change my music, Dad!" she wailed. "It's my music! Do you get that?"

I agreed with her that Andrew should have asked before he switched CDs on her and that helped calm her down a little and then we came up with a solution, which was that the new CD was just fine—once she knew Emily and Morgan were behind it.

When we got the new CD this week she almost had another meltdown when we suggested she listen to that one instead of the old one...until I told her that the first track was The Dance of the Sugar Plum Fairies and then she was all for it.

That girl does not deal well with any change of plans.

We eventually left the Rogersons and came home to act out the Christmas play. Rachel wanted to be Mary, which oddly enough didn't cause any contention at all because Miriam was thrilled to be the angel. 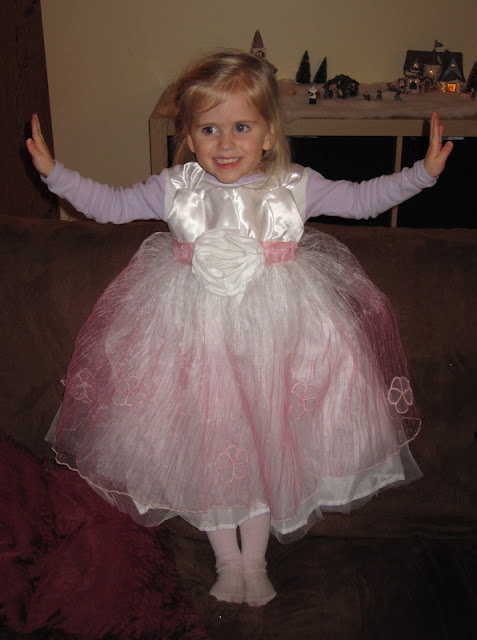 Daddy narrated (and held Benjamin until it was time for his part): 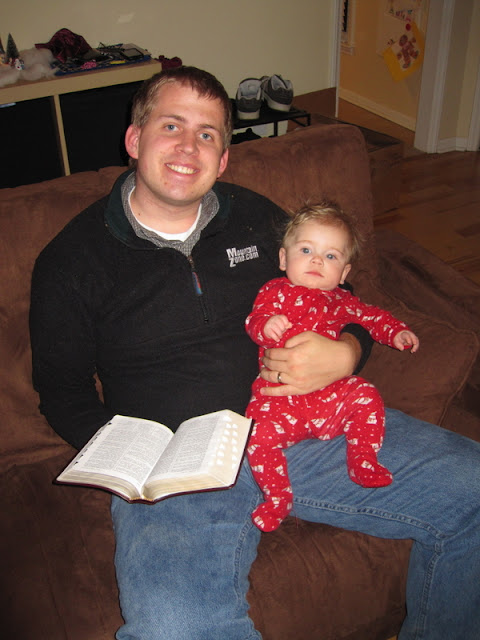 Grandpa was Joseph (and a shepherd/wiseman) and wore the Star Trek robe he got for Christmas from Aunt Katharine (Grandma and Grandpa had Christmas before coming out here): 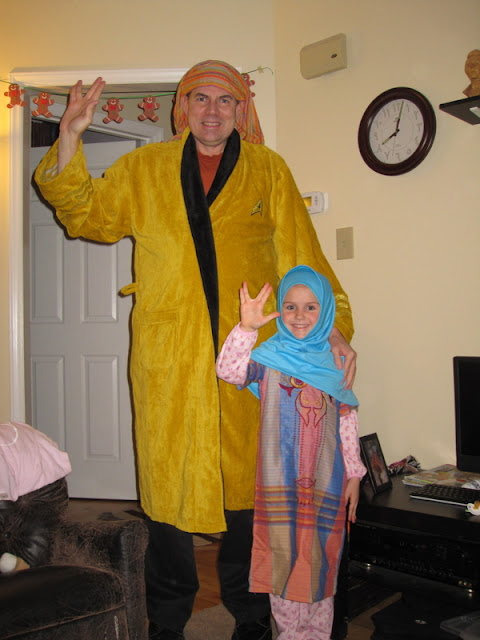 Benjamin was Baby Jesus, of course. The girls were so excited to wrap him in swaddling clothes. They've been planning this play all month! 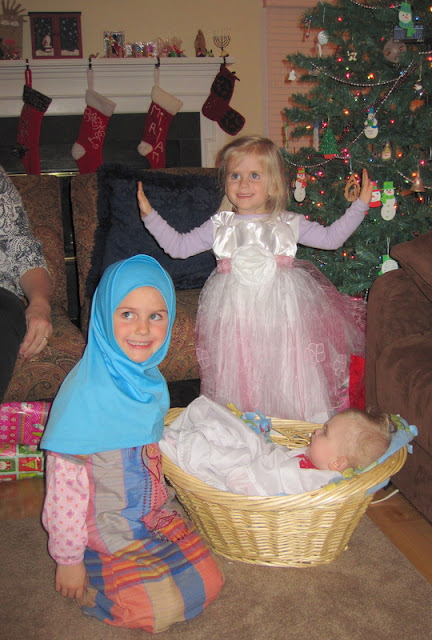 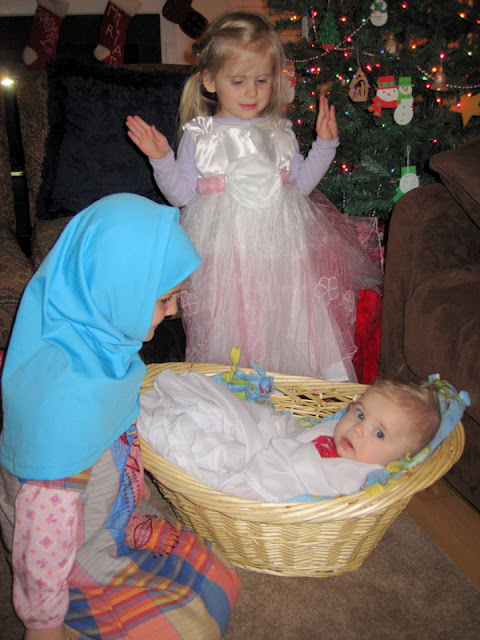 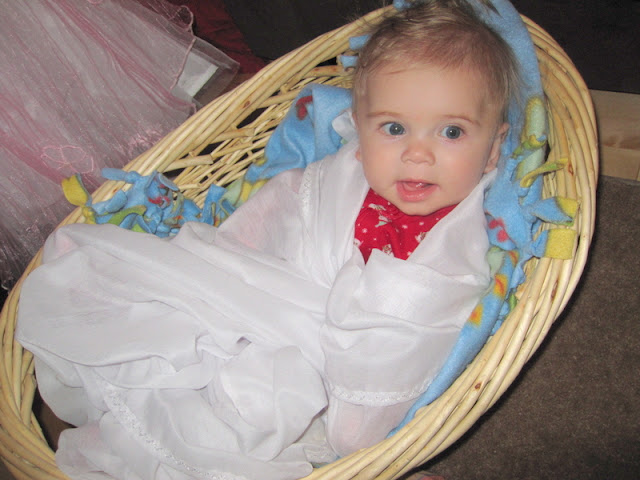 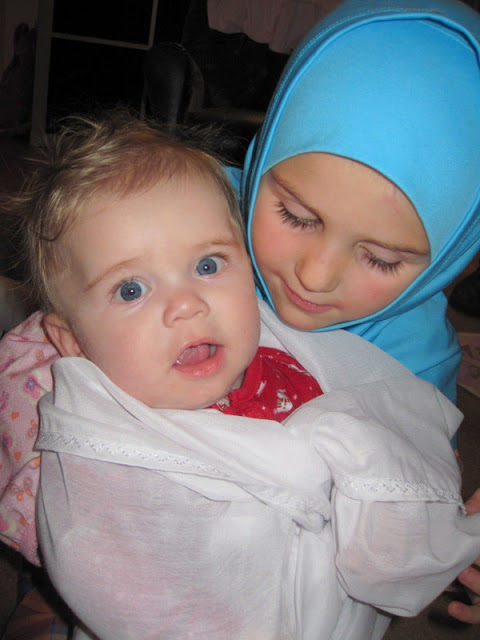 Benjamin/Baby Jesus was rather excited when the wisemen (Grandpa and Miriam) showed up (and Grandma was our wonderful audience): 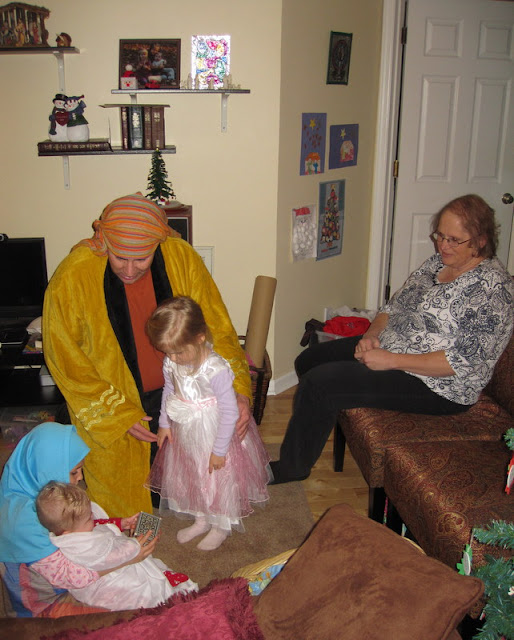 He was very interested in the gifts they laid before him: 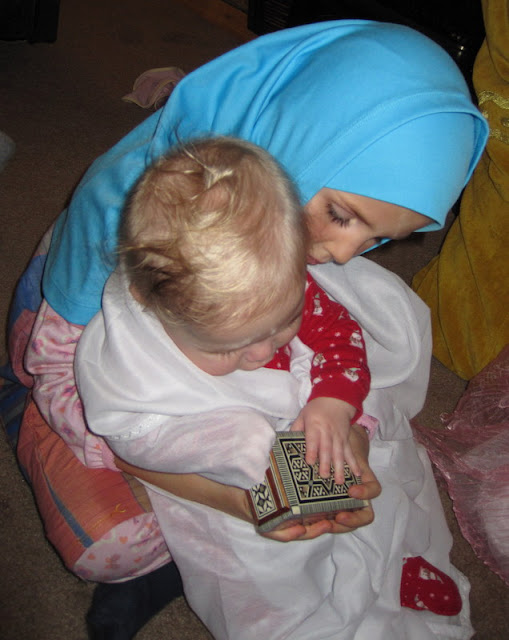 Then we did a bedtime rush of advent calendars—the cupboard, the stockings, the ornaments on the tree, and (ever since Rachel brought it home from school) the gluing of the cotton ball onto Santa's beard—and then brushing of teeth, filling of water bottles, chewing of vitamins. I sneaked a few minutes to take some pictures of Benjamin's first Christmas. 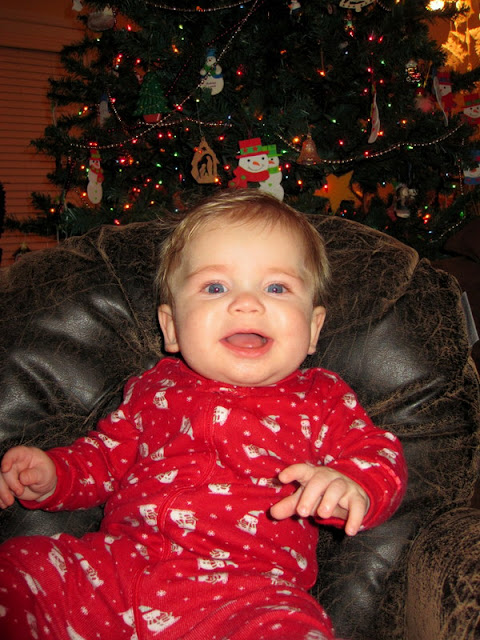 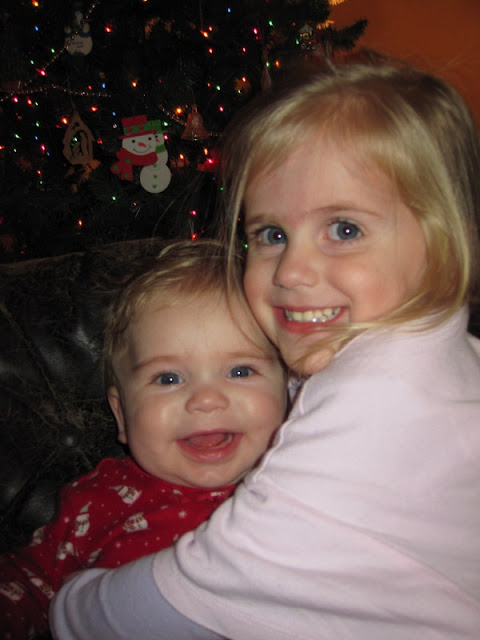 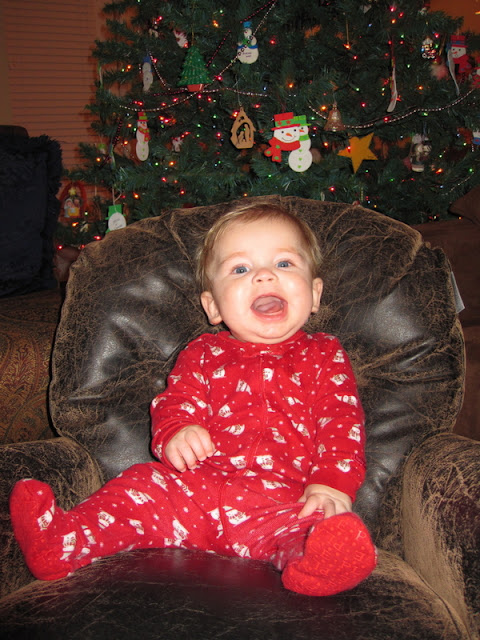 Just as we were ready to tuck them into bed they remembered about the "Magic Reindeer Dust" Rachel had brought home from school (glitter mixed with oats). We were supposed to sprinkle it in the yard to attract Santa's reindeer. I could explain it all to you, but it came with a little poem, so I'll just tell you that:

Come December 24th, as Santa flies here from the North
Here's what you do, it isn't hard—
Just sprinkle this stuff in your yard...

The sparkles draw old Santa near
And Oats attract his 8 reindeer...

Then just you wait—they're on their way!
PS. Happy Holiday! 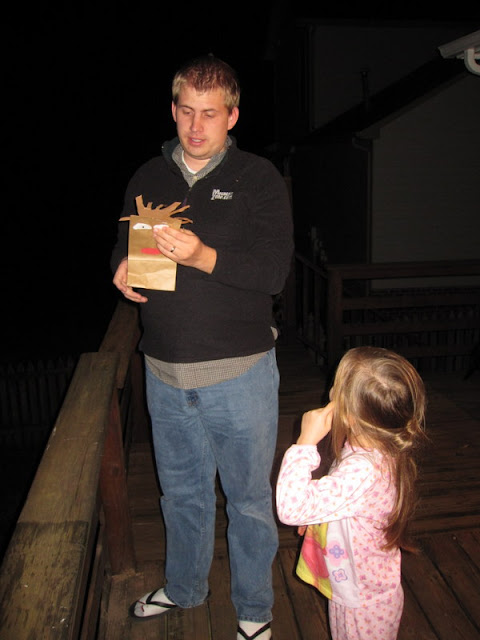 And here are the girls throwing handfuls of oats into our backyard from the balcony: 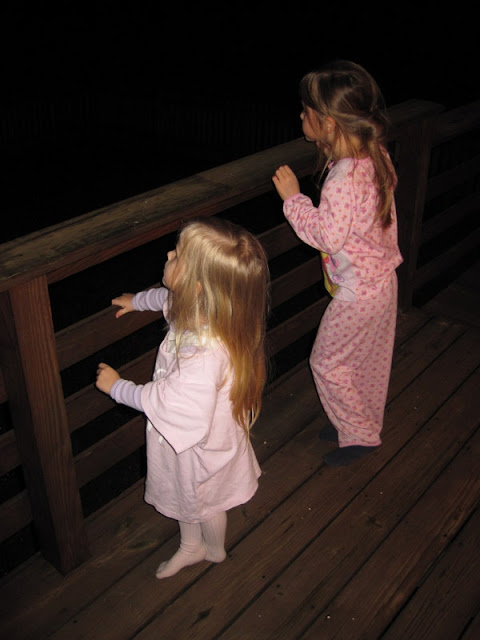 I'm not sure any reindeer came for the oats but I'm sure the birds and squirrels (and perhaps a rabbit or regular, ordinary deer) enjoyed them!

Funny enough, one of Andrew's professors back in Utah lives "on the hill," which is to say that he lives in one of the more ritzy neighbourhoods on the mountainside, rather than in the valley. It also means that they are closer to the "wild" part of the city, which means they get more critters in their yard than we do "in the valley."

Last night a big ol' buck wandered into their backyard and died!

Their poor little five-year-old got up this morning and looked out the window (probably checking for snow—which, I believe they got in Utah) and cried out, "RUDOLPH!?!"

Of all the days to find a dead deer in your backyard!