One of Andrew's family traditions is to have potato pancakes sometime during the Christmas holidays—Christmas latkes, if you will. It's kind of a Jewish thing (because Andrew's family is kind of Jewish). I asked Grandma Pat about this recently and this is what she told me:


My father was Ted Weiner, born 21 Jan 1906 in Pottsville, PA. His hebrew name was Israel Teyve Roosevelt Weiner (he was named for Ted Roosevelt who was president at the time). He was the only son of an Orthorox Jewish family, so was greatly revered. He died 25 Dec 1996 in San Francisco.

His father was Joseph Weiner born 15 Feb 1875 (we think in Lithuania). We don't know his real name as it was changed when he came through Ellis Island. We think his real name was Joseph Prepitovksi, but have no way to prove this. Because he came through Vienna he became a Weiner which means someone from Vienna. He served in the Spanish-American War where he contracted malaria. I remember that his skin was sort of yellow. He died in a Veteran's home in Yountville, near Napa, California.

His mother was Miriam Bershconsky. She was known as Minnie Bernstein (again the name change at Ellis Island). She was born 3 Jun 1880 in Vilna, Lithuania. Supposedly she had to be smuggled out of the country because a Cosack Soldier tried to rape her and she either killed him, or injured him. She came to America when she was 18. She divorced my grandfather Joseph, who was quite a bounder, and married Lousi Brodovsky in 1938.

They were orthodox Jews and I spent many weekends visiting them. They lived in Oakland. Once I went to the Friday night services in the Jewish Temple. The men sat on the first floor and the women and children were on the 2nd floor. It was a very impressive ceremony for a young child.

We hadn't even realized that Miriam was a family name! How shameful! Miriam was thrilled when I told her the (slightly edited version of the) story of Minnie Bernstein.

So, anyway, Andrew has some Jewish blood coursing through his veins, which means the girls do, too, and that's why latkes are a family tradition. We didn't make latkes tonight (though ironically Andrew's family did—they had their Christmas celebration today with all of Andrew's siblings (except for Emily) and they skyped to say hi to us (and to show off their potato pancakes)) but we did have a bit of a party.

And by we I mean "the kids and I" because Andrew had a final scheduled for today—a Sunday (lame) and our anniversary (lame again).

"Don't worry, Mom," Rachel told me when Andrew dropped us off at home after church before rushing off to school. "You don't have to be alone on your special day. Miriam and I will celebrate your anniversary with you!"

We didn't make pancakes for dinner but we did have a Hanukah party (a little late but whatevs). According to Andrew's friend Yulya, Hanukah's not as big of a deal as it's made out to be. It isn't the Jewish counterpart to Christmas. But that isn't what the Hanukah aisle in Wal-Mart would have us believe...

Rachel was excited for our little Hanukah. She's been learning about Hanukah at school (and also about reindeer and Santa...but not baby Jesus...because that makes sense (or not)) and has been anxious to light our menorah. We have a menorah. And we put it on our mantle. But here's the problem: When we bought our menorah we didn't realize it was a temple menorah, not a Hanukah menorah since, you know, we know very little about Hanukah.

We bought our menorah in Jerusalem in 2009, thinking it would be a fun thing to use, you know, on Hanukah. It was beautiful, small, not the cheapest one (but by no means expensive). We only suffered from buyer's remorse when we counted the lamps and found that there were only seven instead of nine. So...oops.

The symbolism surrounding the temple menorah is beautiful—universal enlightenment, with the center candle symbolizing the Light of God, which symbolically leads the other six candles (representing human knowledge). It's difficult, however, to celebrate an eight-day holiday with a seven-candled menorah. We talked about getting a different one, a conversation Rachel apparently chose to listen to: 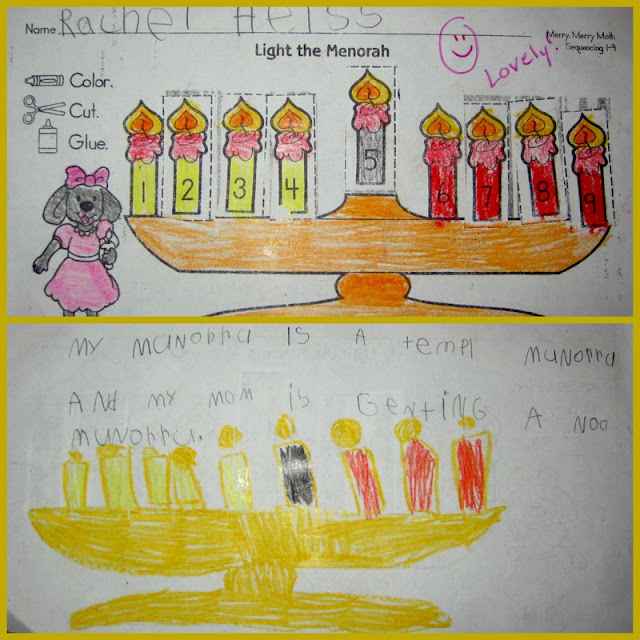 Her teacher might be a little confused since Rachel definitely invited her to the Primary Presentation last month and her teacher definitely came to that so I'm pretty sure she thinks we belong to the Church of Jesus Christ of Latter-day Saints, which we do. But that doesn't mean we can't have a "munorru" and it certainly doesn't mean that if we have the wrong kind that we can't get a "noo" one!

We didn't get a new one this year, though. Instead we jimmy-rigged our menorah (birthday candles + twist ties + poster putty) and lit it up. I read the blessings (the shehechiyanu was especially nice, I thought) and then Rachel told us the whole story of Hanukah that she'd learned at school (apparently she listens to a lot of things (who knew?)). 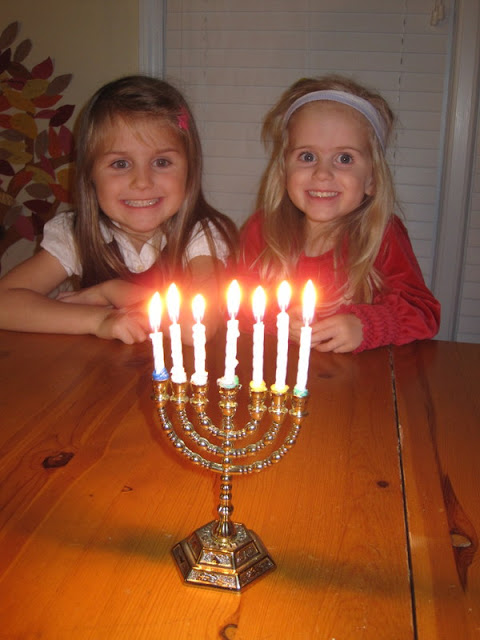 We admired the menorah for a minute before blowing out the candles. 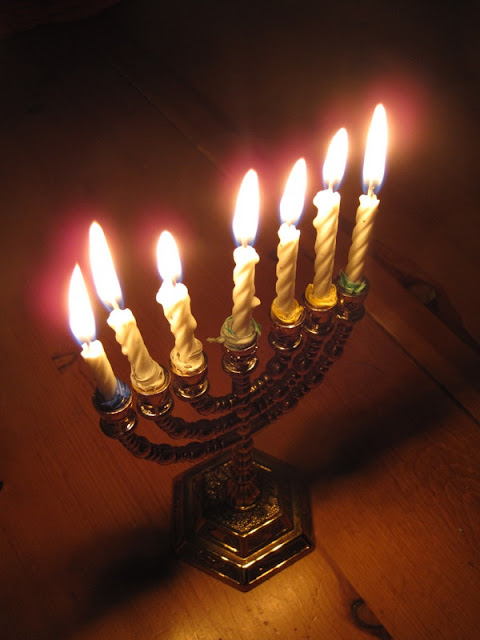 Birthday candles burn quickly—and besides, we had more important things to do...like gambling! We'd picked up some dreidels in the Hanukah aisle at Wal-Mart last month thinking it would be fun to invite some friends over, make potato pancakes, and play the dreidel game...but obviously our plans were overly ambitious with Hanukah falling over finals week.

Instead the girls and I played with the dreidels together. The game is fairly simple. The dreidel is four-sided and each side has a letter; whichever letter it lands on has some sort of action tied to it. Nun= do nothing. Gimmel = Take the pot. Hai = Take half the pot. Shin = Put one in.

We used marshmallows, doling out 10 to each of us and starting our pot with 6 marshmallows.

The dreidels we got (which Miriam selected) were easy enough for the girls to spin because they don't tip over like a regular top does. Rachel could get a wicked spin going... 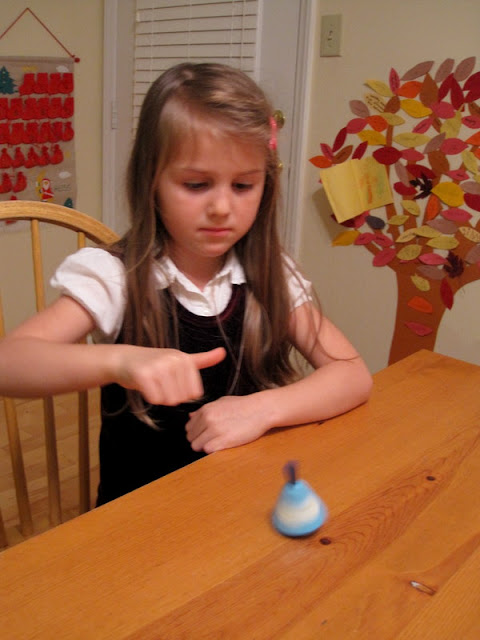 However, when it came time to decide which side had landed up we had a hard time because they never exactly land and instead sit and swivel back and forth, back and forth between two sides. So we'd just pick one of the two sides and move on. It seems having a dreidel that actually falls on a definitive side would be a handy thing to have when playing this game.

Perhaps next year we'll get a new menorah and new dreidels... 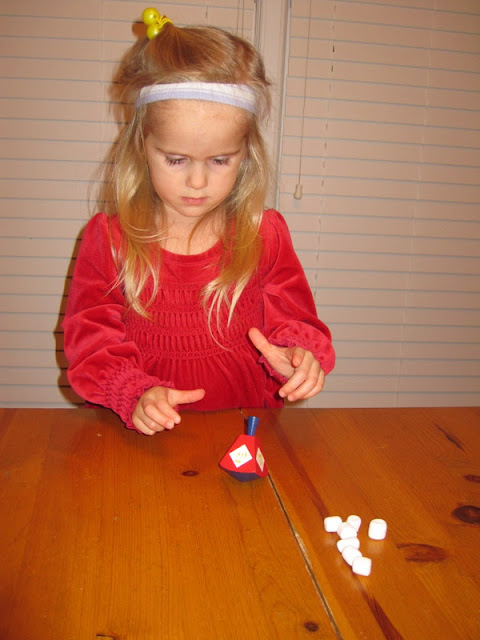 Before we'd even finished the game Miriam said, "I'm done!" and then shoved her marshmallows into her mouth... 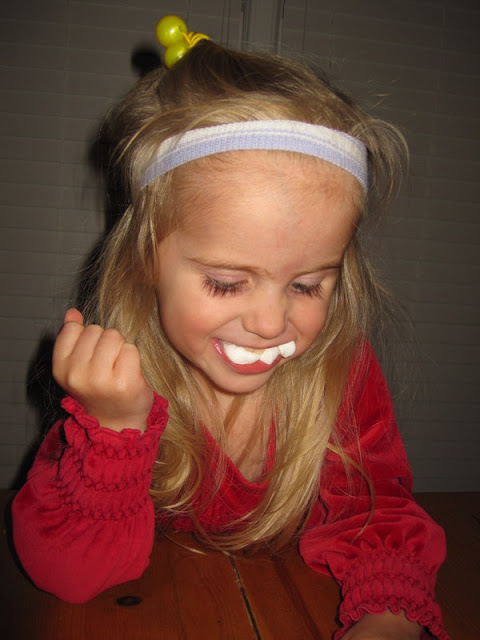 So Rachel and I finished playing against each other; I totally beat her (and then let her eat all my marshmallows). 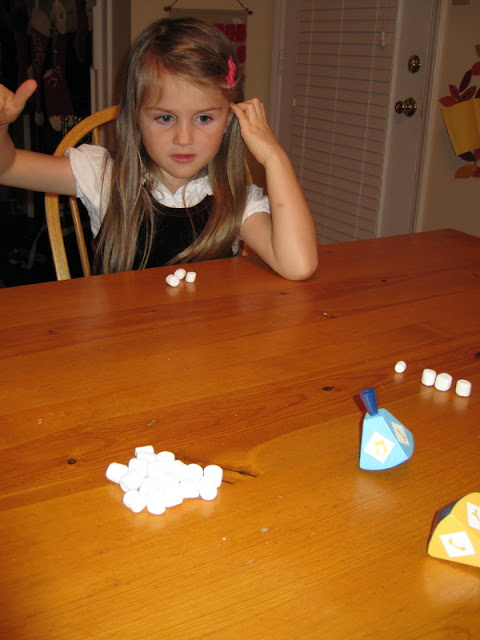 Later Miriam decided she wanted to just spin the dreidel while eating marshmallows. 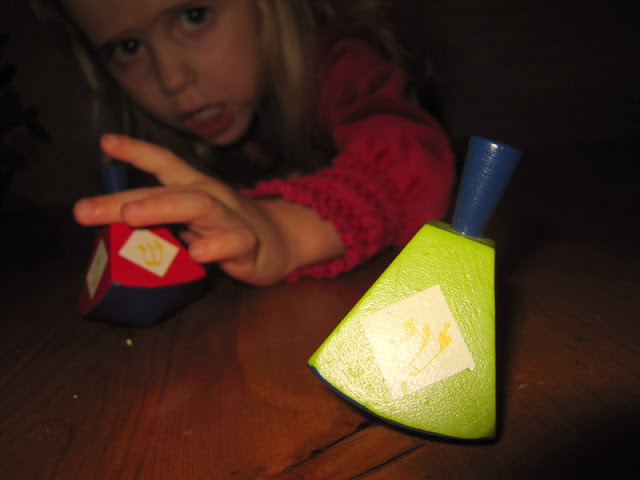 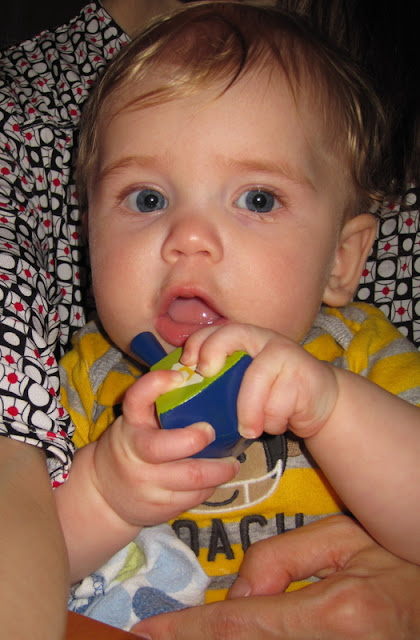 ...but I'm sure that if we'd have offered him a marshmallow he'd have preferred that to a dreidel.

A fun time was had by all (to quote Aunt Nicki) and we learned quite a bit (considering how little we—specifically I—knew about Hanukah). Andrew, meanwhile, had "fun" taking his very last final of the semester. We were seriously bummed it was on a Sunday and Andrew and the other Mormon boy in his program discussed asking if they could move the test to another day. In the end, though, they decided that although we believe in keeping the Sabbath Day holy we also believe in helping others keep the Sabbath Day holy. It might be feasible to not schedule tests on a Sunday but it's not exactly feasible to not schedule tests on Fridays, Saturdays, or Sundays (which are all days of worship for various religions—are there other days of the week I'm missing?). If we were crying out against tests on Sundays because it was the day we wished to worship then it would only be fair to not allow testing on Friday or Saturday as well.

The test didn't interfere with our worship schedule—which was a good thing because we had our Christmas program today and were very busy (I sang with the choir, Rachel sang with the children's choir, and Andrew played the organ)—so in the end we decided to suck it up and take the test at the scheduled time. I suppose we'll just cross our fingers that we'll have a better testing schedule next semester (and the next two after that).

It was lovely when Andrew finally came home and we were able to sit down together (with a glass of sparkling white grape juice) and wish each other a happy anniversary. To us! Seven years! The rest of eternity to go!
Posted by Nancy at 11:28 PM