I know we were just at Stagville last week for family pictures, but we decided to head back again this Saturday for their antebellum Christmas celebration (after forcing the kids clean the house).

We got to see a meal being cooked over an open fire... 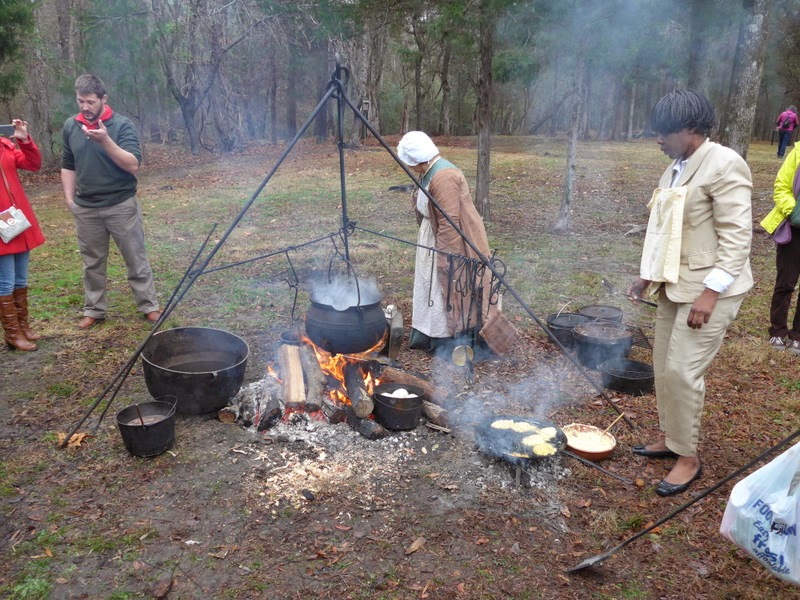 Benjamin was very interested in watching the stuffing of this chicken—it was stuffed with rosemary from the bush in the house garden. 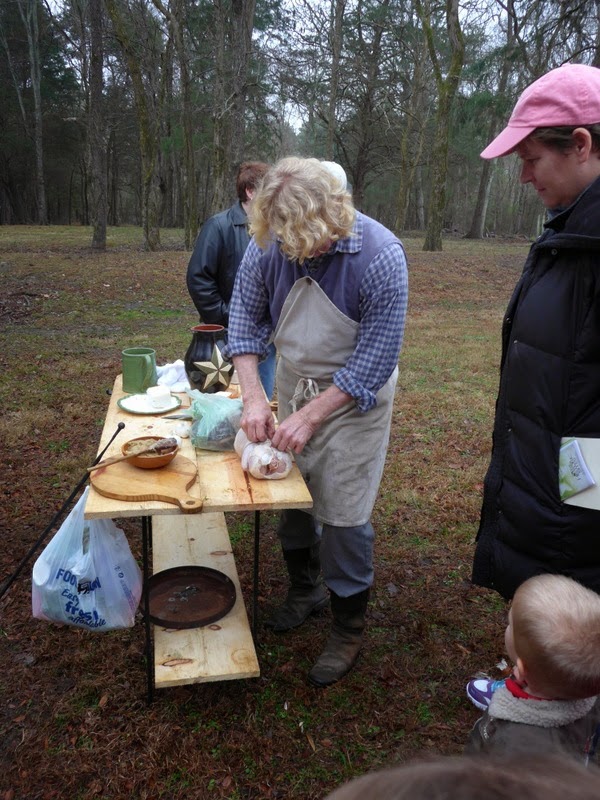 We didn't want to stick around long enough to sample the food—though the kids were very impressed that coals were hot enough to get a pot of water boiling!—so we went to the Bennehan House to listen to some music. There the kids had (and spilled) apple cider and enjoyed peppermint sticks. Not every little boy living in 2014 can say that they've spilled apple cider in a house built in the 1700s, but Benjamin can!

We listened to a duo called Little Windows perform. We learned some very fun things about Appalachian instruments—like that banjos were derived from African stringed instruments. We also were tempted, once again, to look into buying a dulcimer. Andrew says that if I can pick up the ukulele I can pick up the dulcimer. He says he can't because it's a stringed instrument and he has a closed mindset (though he did go on to say that a dulcimer is more like the piano than the ukulele is...so perhaps he could learn it after all).

Julee Glaub offered the girls her drum for a couple of songs but they were really too shy to play. 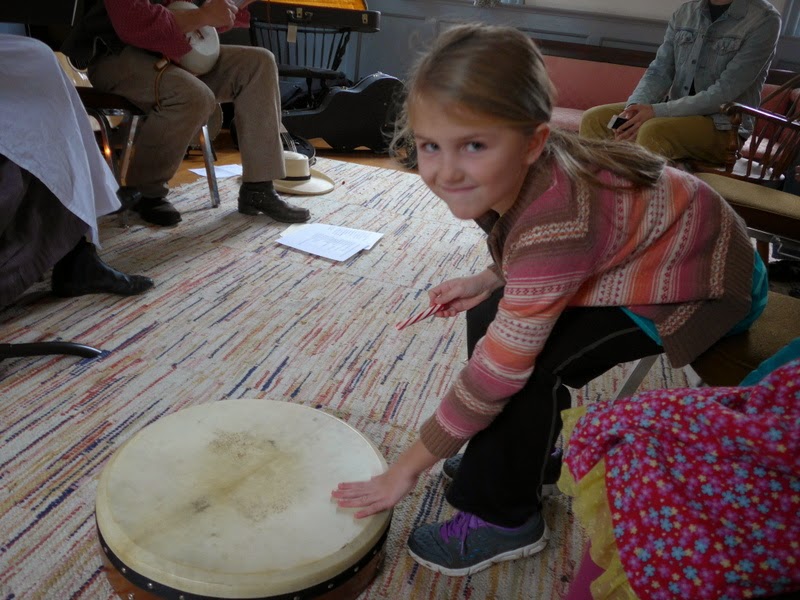 Miriam tried playing it with her (muddy!) feet but I stopped her from doing that pretty quick. Benjamin didn't even want to give it a try, though he did get down and dance for a bit during one of their songs. 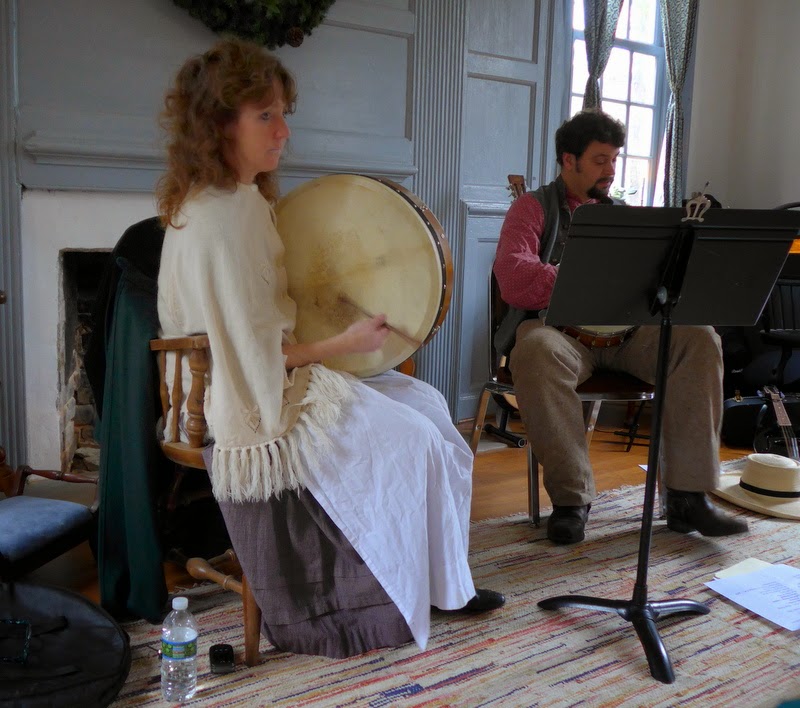 All the windows of "The Big House," of course, had a candle on each window sill, along with some holly and herbs. It was simple and beautiful. 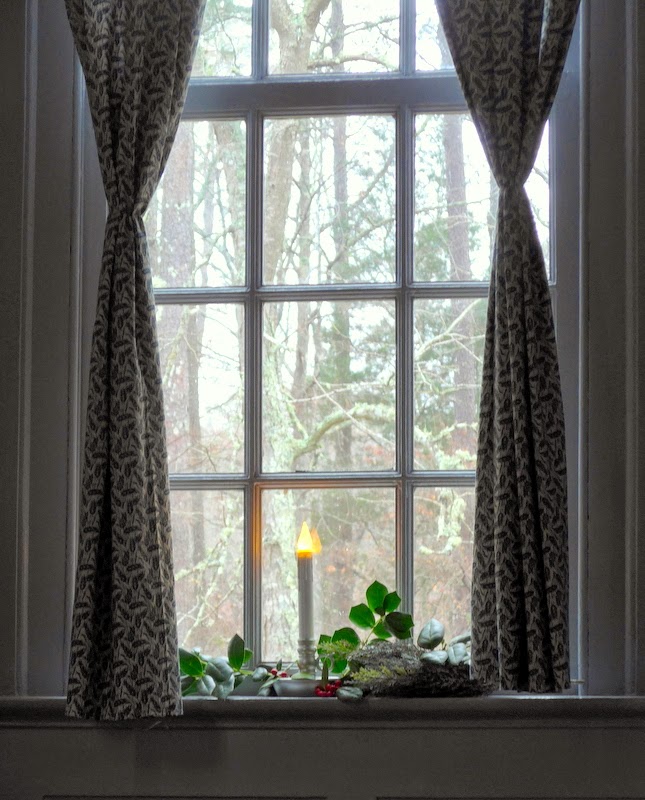 We took the shuttle from the Bennehan House over to Horton Grove, where the slave quarters were/are. Benjamin was rather excited to get to ride a bus! 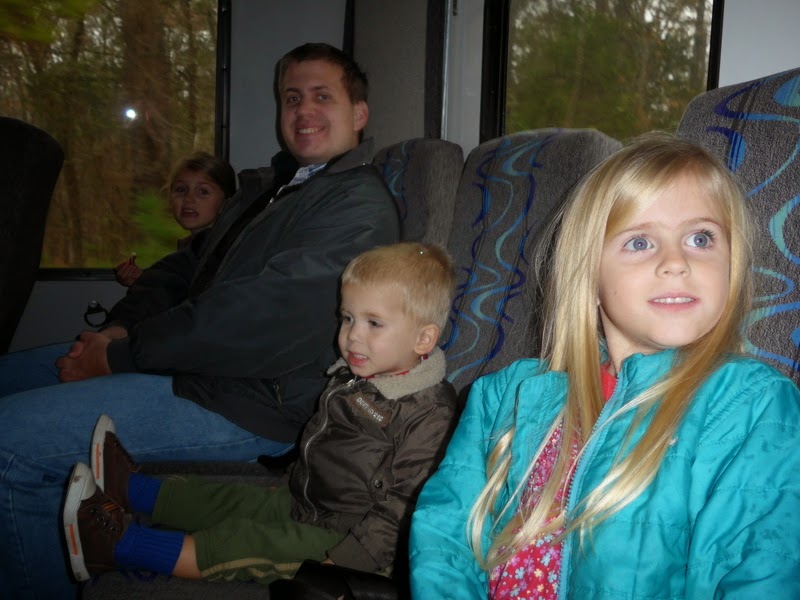 The Chapel Hill Woodturners were doing demonstrations. They had a little shop set up with some things they'd made and even had lathes outside where they were making tops for the kids. Rachel chose a turquoise permanent marker to decorate her top. 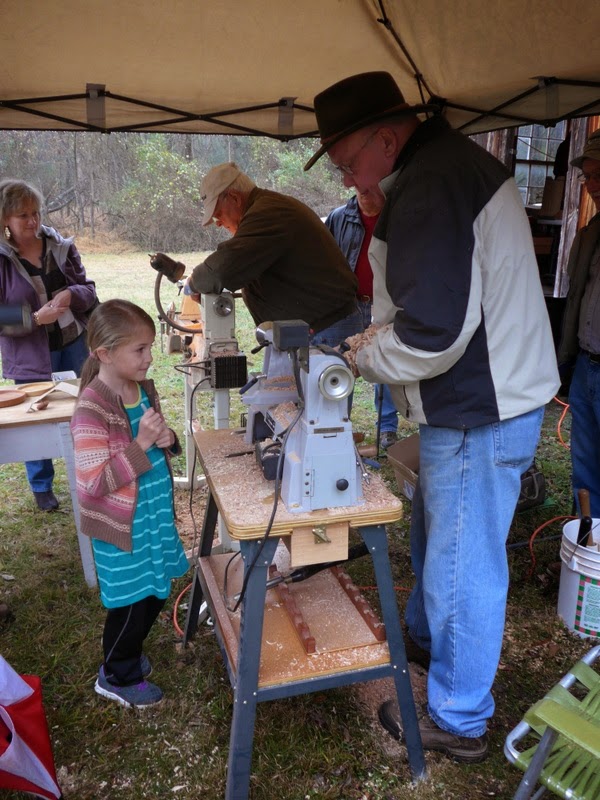 Miriam, of course, chose the closest thing she could find to pink. 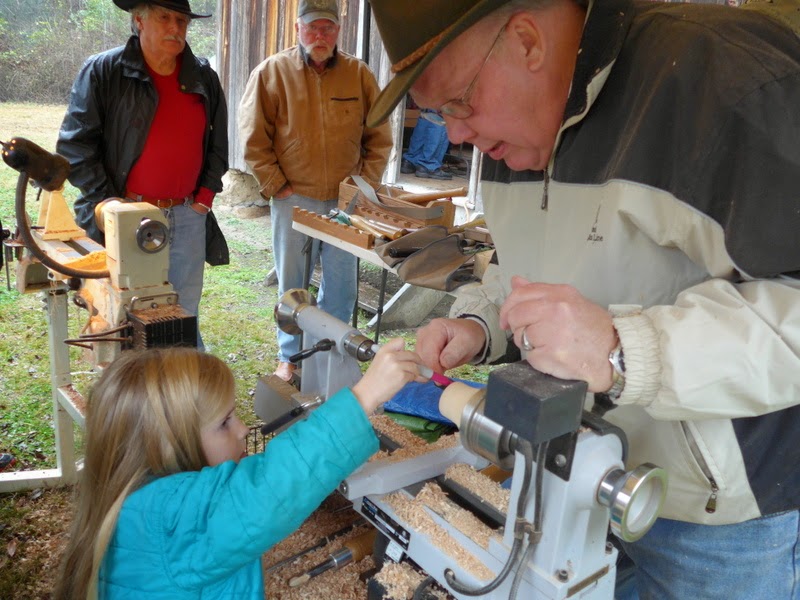 They got to hold the marker up to the spinning wood to colour it. And then they thought the man who made them was a fortune teller because he guessed that their favourite colours were turquoise and pink. "How did you know?!" Rachel asked.

"Well, you're wearing a turquoise dress and your sister has on a pink dress, so I just figured..."

Miriam also had a freak out moment when Julee (from Little Windows) winked at her and said, "The dulcimer would be a good Christmas present if you're five years old!"

We really enjoyed the "African Music & Drumming by Sankofa" (I can't find an actual name for this group...or an actual webpage for this group if Sankofa is indeed their name). It was a lot of fun to listen to!

And this actually might be where we learned about the banjo. I frankly can't remember.

Anyway, we thought it was a lot of fun. Miriam and Rachel thought it was interesting that they used cowbells and tin cups as instruments. Cowbells are fairly normal in music (you can always use more cowbell) but the tin cup was new to me.

Here's Miriam trying out one of the drums (she's not sure she's supposed to be...but since they had children playing it the whole time they were playing I assured her it was okay). 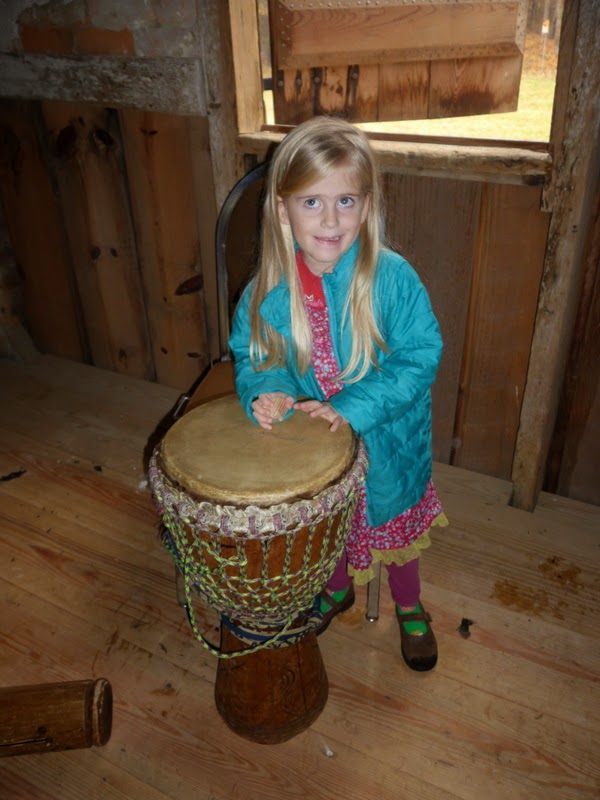 We went inside the slave-house-turned-tenant-farm-house because it wasn't open when we toured Horton Grove the first time. It's definitely a bit of a fixer-upper! 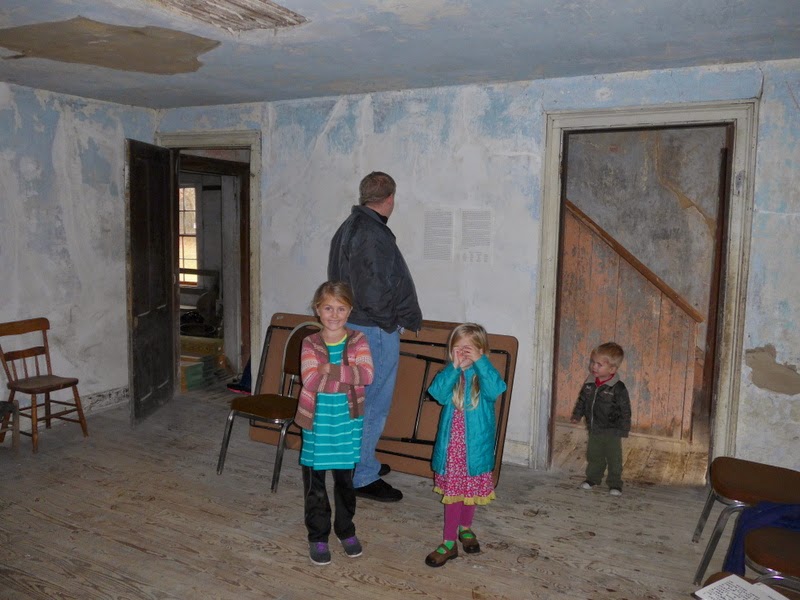 It looks like it's mostly used for storage now, but there were a few quotes on the wall—a contract between landowners and former-enslaved people after the civil war (that's what Andrew's reading), and a few poignant quotes: 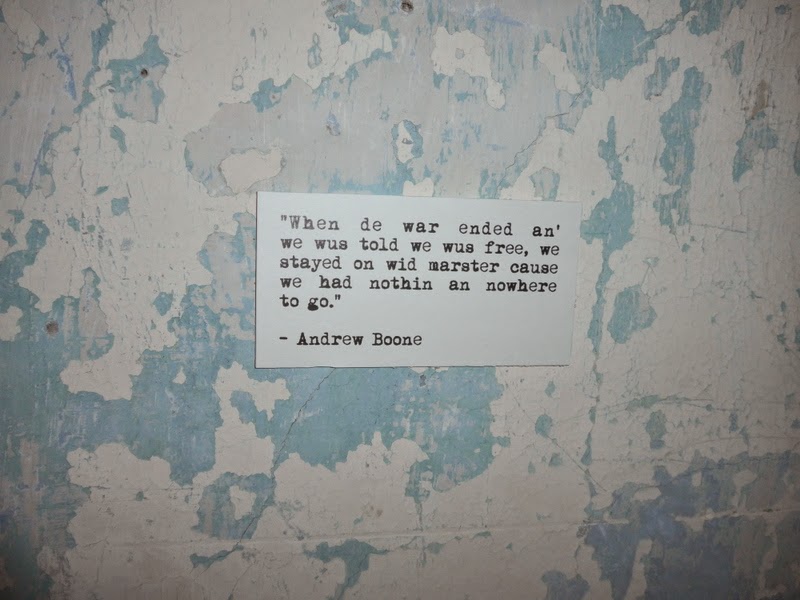 History certainly is a complicated thing.

It was fun to get into the Christmas spirit a little and to experience what Christmas might have been like before 1860 (we did sing Rudolph the Red-nosed Reindeer in the Bennehan House, but only because the performers wanted to please the children, not because it was time-period music).
Posted by Nancy at 10:15 PM