We went to church at Naanii and Bumpa's ward before packing up to head back to Grandma and Grandpa's house. Rachel cried. Benjamin went to nursery willingly. And Miriam was a socialite, of course.

When I picked the kids up from their classes Rachel was fine. Miriam was being a socialite. And Benjamin was crying.

"Me turn baby nursery," he explained. "Me cry."

He was just miserable. Usually he says "me turn baby night" because that gives him "permission" to fuss and carry on at bedtime. This is the first time he's "turned baby" anywhere else.

"Mine 'spenders fall off! Mine pants fall down!" he sniffed.

"I can help you with your suspenders," I offered.

"Me not 'ike a nursery guys," he continued.

I'm sure he'd like them just fine if he took the time to know them. But they weren't his "nursery guys" and everything was different and he found that frustrating. He hasn't been so happy about being picked up from nursery since he started enjoying it (about six months ago).

I think this picture was actually from Monday, not Sunday, but here's what the kids look like all squished in the backseat together. Having them all sit this close together has been interesting; there's been a lot more fighting on car rides!


We had a pretty quiet Monday at Grandma and Grandpa's house. In the evening we decided to go to The Tree of Life display in Draper. We stopped to pick up Grandpa Frank on the way there. He invited us inside to see his train and planes. 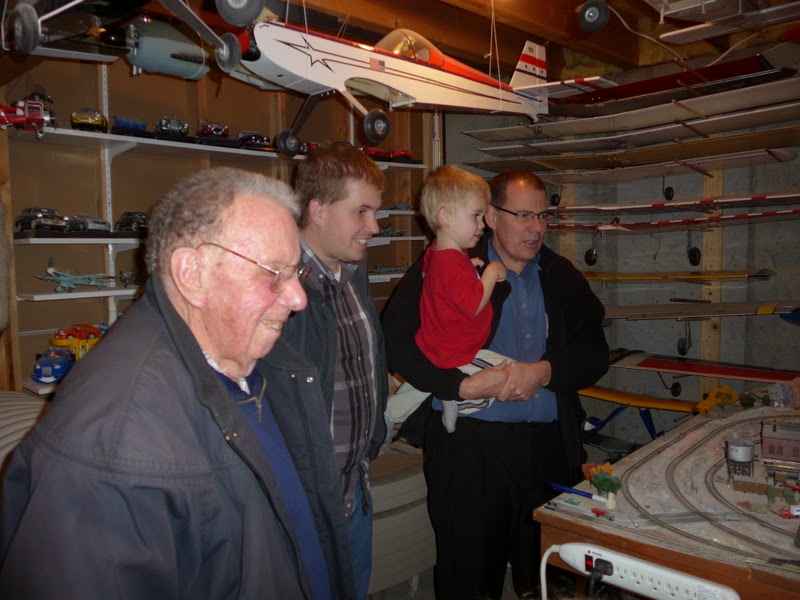 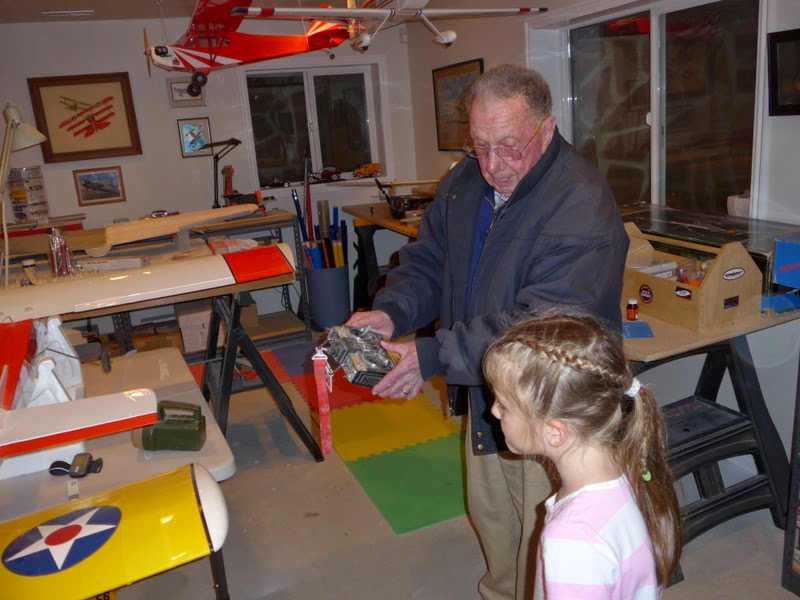 Grandpa Frank builds all of his planes himself. His workshop is pretty impressive.

The wind in Draper was brutal. Since we came in two different cars we milled around--and zipped jackets and pulled on gloves--while we waited for everyone to show up. The only problem was that Grandma never arrived, which was interesting since she'd come in the same car as Grandpa Reid and Grandpa Frank. 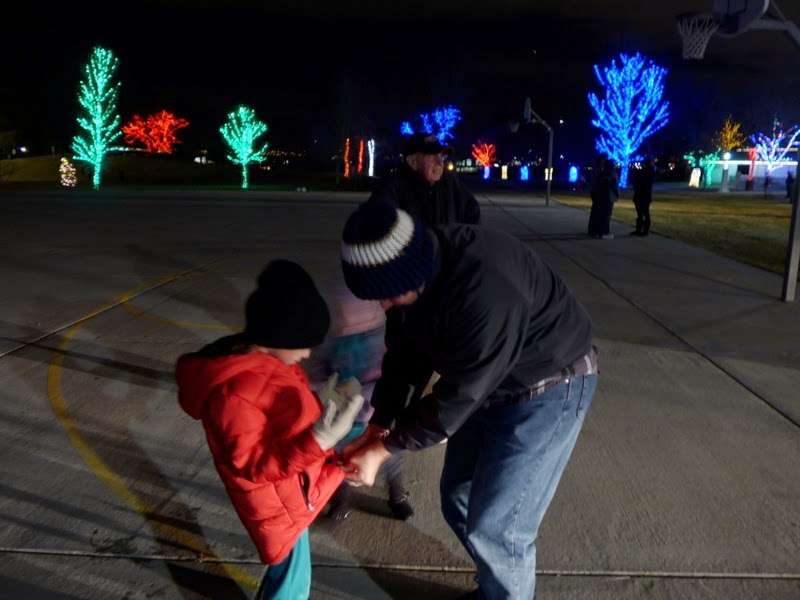 We stood in our group and waited for a few more minutes. Then Grandpa left to check at the car for her. Then we waited a few minutes more. And finally someone had the idea to call her (cell phones are magical).

"Where are you guys?" she asked.

"We're waiting at the parking lot for you," we said.

"I'm already at the tree!" she said. "I couldn't find you guys so I thought you headed over without me." 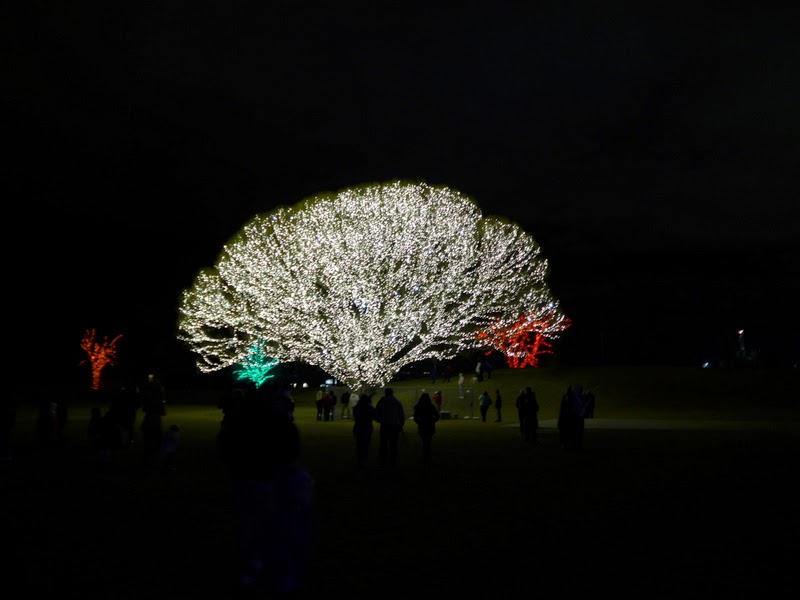 We made our way toward the tree in the dark, encountering muddy paths, crossing over a creek on a bridge, and finally making it to Grandma--and the tree. We thought it was quite a symbolic journey for us to make, considering the account of the Vision of the Tree of Life.

Here's all four Heiss men in front of the tree together: 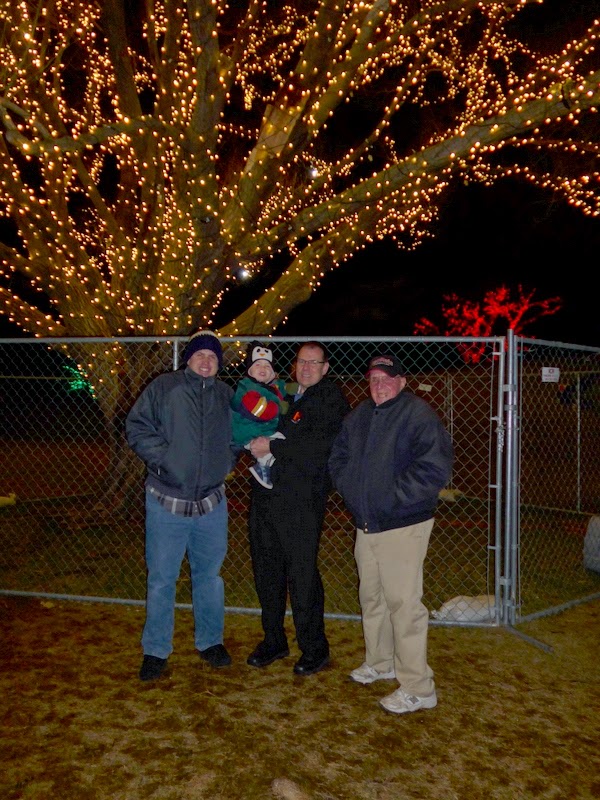 Here's Rachel with Grandpa and Benjamin: 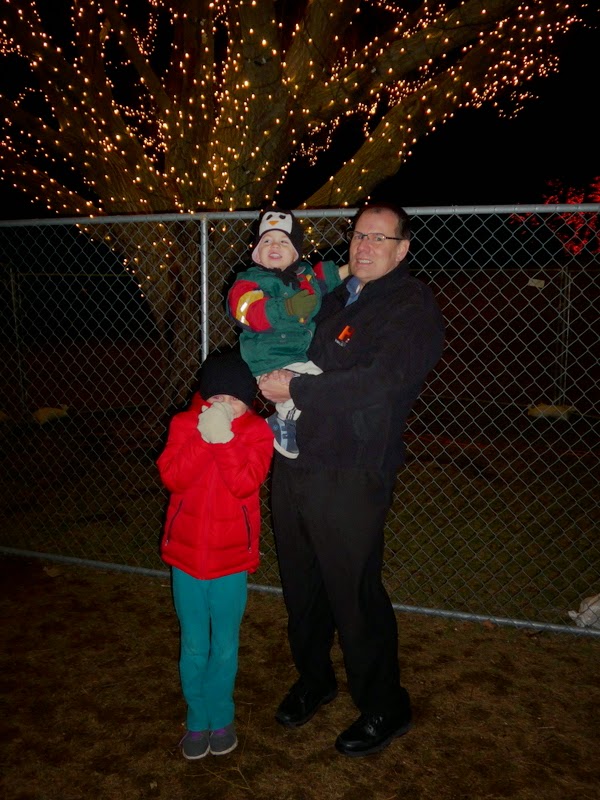 And here's our little family: 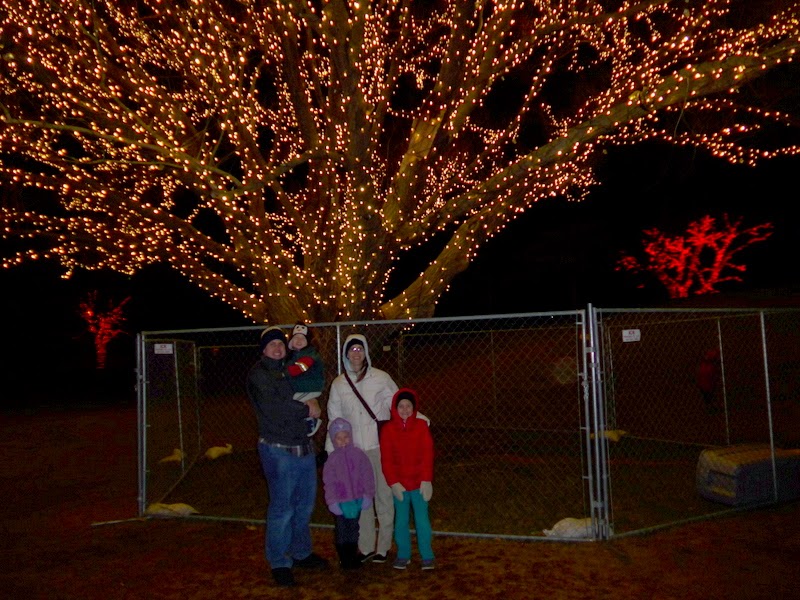 We were too cold to take many pictures, but the tree sure was beautiful to look at!
Posted by Nancy at 1:06 PM