Winter is giving us a bit of a reprieve right now, which is rather kind of it.

I don't hate winter as much as I used to, it's still not my favourite season, but I don't loathe it like I used to. Part of me wonders if this change has more to do with my latitude or with my age or with global warming in general, but the grip of winter simply doesn't seem as strong as it once was. It used to seem to drag on forever, but now it's clipping along at the regular rate of (as my Uncle Bruce might say) one second per second.

Still, it's nice to get outside without a million layers on and without slipping on ice so we've been making the most of it while we can because we know there'll be a few more storms before spring (at least, one can hope).

We've been doing a lot of scooter-walks after school when the weather is warmest. I was so excited to get the kids scooters for Easter last year and they were, too...until they tried them out. Then they had nothing but complaints—their legs were tired, it was hard to balance, they can't steer—and we ended up with a few pretty good wipe outs. Rachel and Miriam got decent on them, but still didn't ride them very often. Benjamin was so bad it wasn't even funny.

"Just gliiiiiiide!" I'd urge him while practicing (and practicing and practicing) in the church parking lot. He wouldn't glide. He wouldn't balance. He'd just do this weird waddle-scoot thing that I totally agreed looked like a lot of unnecessary work. No wonder riding scooters wasn't very fun.

But somehow he figured it out—I don't know when, I don't know how—and this boy is a scootering machine now! He always wants to go out on his scooter. He zooms around, uphill and down, he rides far, far ahead of me and then circles back. It's been an amazing transformation.


Zoë's not too bad on her little scooter, either, though I can usually keep up with her if I walk fast (but that means I get to walk fast while we're out walking, so that's nice).

Here they are zooming down a hill while we were on a walk the other day:

Sometimes when I think about moving to Georgia I get all excited for because trees, the beach!

Then I take a video of my kids, like this one, and I get all sad to leave Utah because mountains!

I guess both places have their upsides and downsides. We won't have to worry about air quality (inversions/wildfires) in Georgia, but we don't have to worry so much about creepy crawlies (ticks, snakes, etc) here.

This is why I never know how to answer the question of where we'd like to end up. I mean, obviously the answer to that question right now is...Georgia...but there are so many wonderful things about so many places (and so many hard things about those same places).

Anyway, today the kids rode their scooters to the park—even Zoë made it the whole way there (though she did not want to ride her scooter home, so I looped it over the stroller's handles and we walked together)—and while Zoë and Alexander climbed around together, Benjamin and Miriam played various games of tag with some friends. 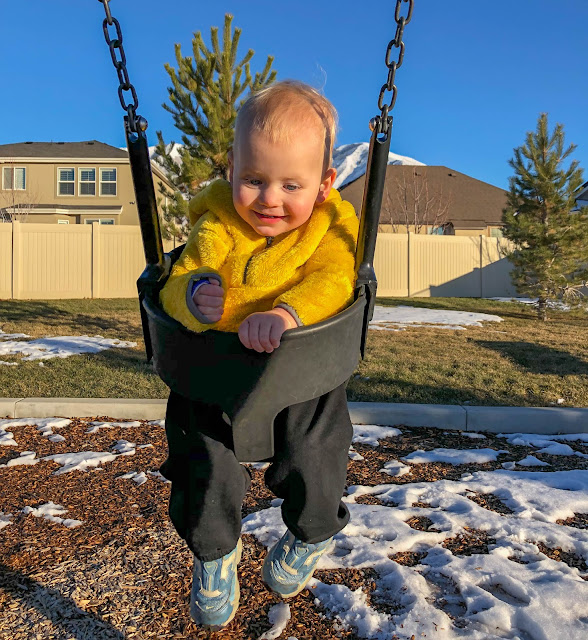 Here are a few videos of Alexander trying to get around with his cast (so cute, so sad):

It's been nice to get some sunshine!
Posted by Nancy at 2:13 AM