Late in October, Karen was on the phone with her sister Linda and Linda mentioned how she was just looking at tickets for Wicked. Karen enjoyed musicals and rather liked Wicked so she asked Linda to book a few tickets for her—because Reid doesn't particularly like Wicked Karen decided she'd invite Rachel and Miriam to join her.

She asked me in secret if it would be alright if she took them and I said that of course it would be! So she booked the tickets and was planning on gifting them to the girls for Christmas. Both girls love the musical and have been singing the songs since they could talk, basically, so I knew they'd be very excited when they opened them.

Karen wrote out the check to Linda on Thursday, November 1. And then, well...you know.

We took her to the hospital that Saturday and by Thursday, November 8 we were all preparing to say goodbye to her, which we did in the wee hours of the morning on Friday, November 9.

We still gave the girls the tickets, but instead of going on an outing with Grandma, the girls went on an outing with me (and Aunt Linda and Aunt Dorothy and cousin Michelle and Aunt Dorothy's college roommate). We had such a fun evening together, though it was also tinged with sadness knowing the intended recipient of my ticket. It felt odd to be driving home in the middle of the night, feeling exhilarated by the wonderful performance when I thought about how incapacitated with shock we'd felt driving around in the middle of the night (to and from the hospital) three months previous.

It was an amazing grand finale of Christmas presents from Grandma, though! We had such an amazing time!

Linda drove us all into the city (us being me, Rachel, Miriam, and Dorothy; in our van). We parked at City Creek (in section D1) and then walked down to Mollie & Ollie where we met Michelle and Dorothy's roommate, a recently retired music educator (who plays the viola).

"We chose a very healthy restaurant," Linda told me. "Because you're with us. Dorothy's a little upset that we can't go to Cheesecake Factory but I wanted to make sure there was something on the menu that you could eat."

I told her that Cheesecake Factory would have been fine (though I don't know if I've ever been there, either (there are a lot of places I haven't eaten at (our motto is: eating at home saves money (and we've been pinching pennies since forever, sooo...))).

I have this weird reputation as the family hippy because I do things like eat vegetables. But I like desserts as well. And burgers. And stuff.

Anyway, since everyone else was already waiting for us at Mollie & Ollie's, that's where we went and my girls and I thoroughly enjoyed it (though I'm not sure anyone else did). Miriam and I both got the teriyaki chicken bowls and Rachel got a ginormous pulled pork wrap (which she ate up lickety-split, and then ate about half of Miriam's teriyaki bowl). It was just a quick walk from the restaurant to Eccles Theater. 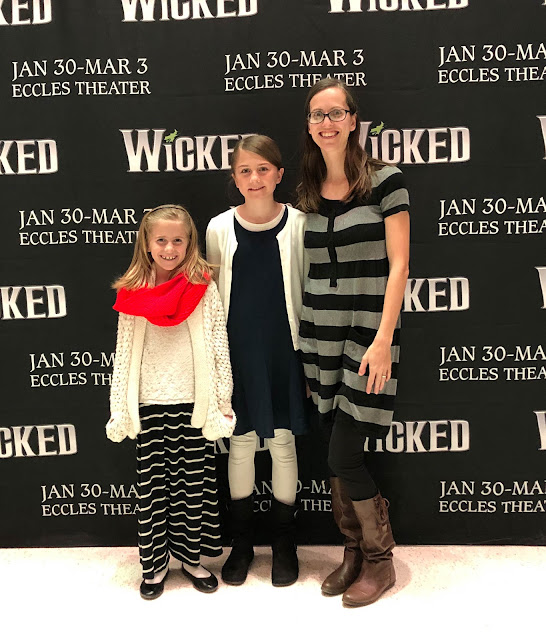 Miriam was so excited she was bouncing, which Rachel found a little annoying, but when we opened the door to find our seats and Rachel caught a glimpse of the stage, she did a fair bit of squealing and jumping, herself. Miriam kept asking me every minute or so what the time was and how much longer it would be until 8:00, so I eventually just turned my phone off so that I couldn't tell her! 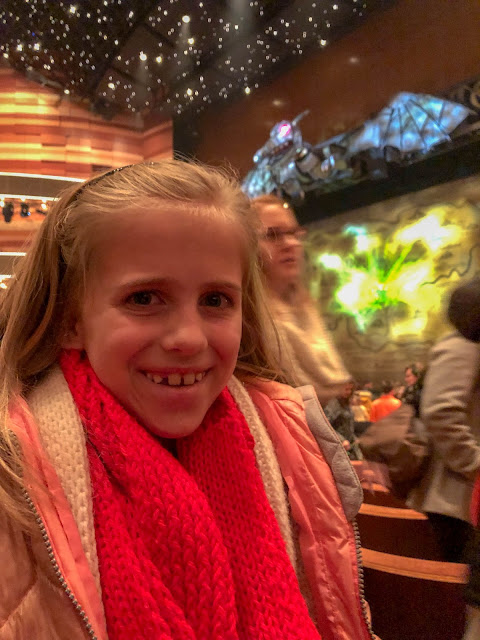 We were in OR R (orchestra right), row P, seats 123, 121, and 119—fabulous seats, right on the floor! They were a little awkward to get to because our row ended (with seat 125 (the seats were only oddly numbered for whatever reason)) with a wall, so we only had access to the aisle from one side of our row. That meant that to get out (at, say, intermission, we had to walk past every single person in our row). We noticed, after we'd already found our seats and were soundly boxed in, that many of the smaller patrons were carrying in extra seat cushions—glorified booster seats, basically—and I began to wonder where those had been hiding and if I should seek some out for Rachel and Miriam (and at the very least Miriam).

Miriam insisted she could just kneel on her chair or sit on a pile of coats, but I didn't know that would be sufficient. Plus, these tickets were not cheap, so she should get to enjoy the show with as much comfort as any body else, right?

I was just debating whether I needed to walk past everyone in our row when a family of three walked into the auditorium carrying three pillows. They found their seats, directly in front of us.

"What do we do with this pillows?" the wife asked. "The seats are already padded...and this makes me way too tall. I don't think we need these."

"Excuse me," I said. "But we didn't see any of those cushions when we came in and I think my daughters could really use them, so if you don't..."

"We could just give them to these fine ladies behind us!" the husband said.

He seemed pleased that he didn't have to navigate the crowd to return the cushions and Miriam and Rachel were both very happy to be boosted up to adult-height. 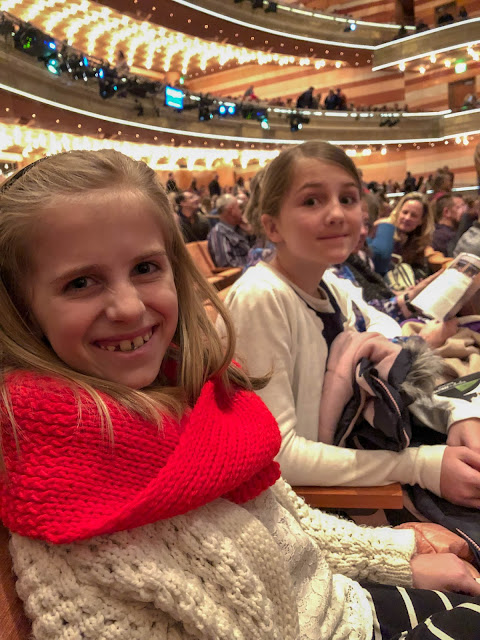 I think they enjoyed the show much more than they would have if they'd been craning their necks the whole time.

The show was fantastic. It was my first time (as well as the girls) so I was every bit as excited as they were. Elphaba (Jackie Burns, the longest-running actress to play Elphaba) was amazing and we rather enjoyed Glinda (Kara Lindsay). I enjoyed her part more than I thought I would, actually. Having only ever listened to the music I didn't quite have the story line right in my head. It was nice to set that straight and really only made me like the musical more. It's such a great story!

We were all rather tired by the time we got home (12:30 AM) and Rachel and Miriam immediately fell into bed. I was met by a rather anxious Alexander and frazzled Andrew.

Leaving Alexander was my biggest worry about going to this show. He still nurses before bed, which naturally means that no one else has ever put him to bed, and I just knew it wouldn't go well. But shortly before I turned off my phone/before the show started, Andrew sent me a selfie he'd rather jubilantly taken of Alexander snoozing peacefully on his chest. It was a great gift for me because it allowed me to relax and enjoy the show (crossing my fingers that Alexander would stay asleep for a while).

Unfortunately, it did not keep and Alexander spent most of the evening fussing. It took him until 2:00 in the morning to settle down and fall asleep. And then he got up (for good) at 8:00!

Not enough sleep for a baby boy.

Rachel got to sleep in a bit, but Miriam had a "Pedals, Pipes, and Pizza" event in Provo this morning (at a house in Provo that someone built a pipe organ into!) so she (and Andrew) had to get up for that, and boy was Miriam grumpy. She ended up taking an afternoon nap, thank goodness.

It took me three hours to convince Alexander that he should also take an afternoon nap.

We all kind of spent the day grumping at each other. But I'm sure we'll be recovered and back on schedule by tomorrow and the show was well worth it, even if it was late!

(My first professional broadway musical since drama tour in high school; I'm up to three now: Lion King, Into the Woods, and Wicked. Obviously I feel the same way about going to the theater as I do about eating out.)
Posted by Nancy at 1:38 AM