Phone cameras have come a long way the past few years. Mine is good enough now that I've finally started leaving the house without my trusty camera in tow. It's nice not lugging it around and I can still capture the moments I want to capture while I'm out and about. Still, I'm never satisfied with the quality of my phone pictures. Usually this doesn't matter much but sometimes...

Sometimes I capture a shot that's just about perfect. 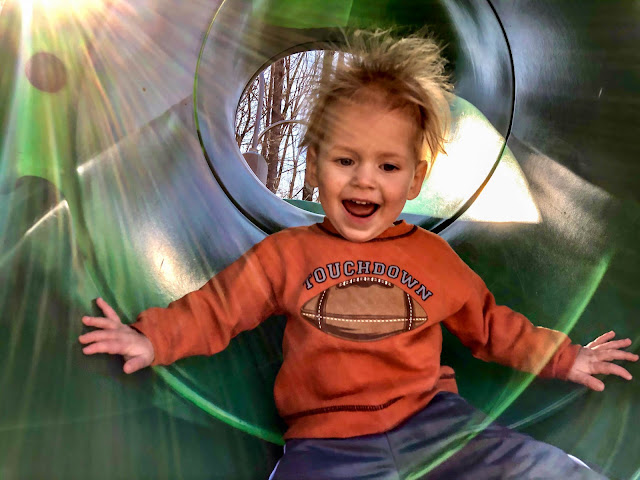 The lighting is perfect, the composition is great, there's movement yet the image is fairly crisp...but the darn thing was taken on my phone so it's a grainy and gross.

And then I find myself wishing I had brought my camera along.

But I also know that as "bad" as it is to have your phone out while your kids are playing, it's much easier to snap a picture with my phone and shove it into my back pocket and return to playing with my kids than it is to take a picture with my big(ger) camera(s), store said camera properly in its case, and then either put the case some place safe (in the stroller or back into the car) or have it slapping around on its strap (which makes playing cumbersome).

I suppose there are pros and cons to both, but this shot was definitely a win.
Posted by Nancy at 7:08 PM