When Andrew asked Miriam what her favourite part of being 10 was, she didn't say me (rude). She said everything was good about being 10, except for March. Considering yesterday, her birthday, was March 238th, that's a considerable amount of the year she took an exception to! We jokingly asked her how she enjoyed having her birthday in the spring, rather than in the fall, like it usually is, and she replied that it was wonderful because she usually has a more autumnal cake but this year she felt justified in picking a more spring/summer flavour.
She went with what Rachel called a "basic" vanilla cake, with raspberry filling. And it honestly was the most delicious cake Rachel has made to date. Miriam also requested that the cake be decorated simply and elegantly. So here it is: 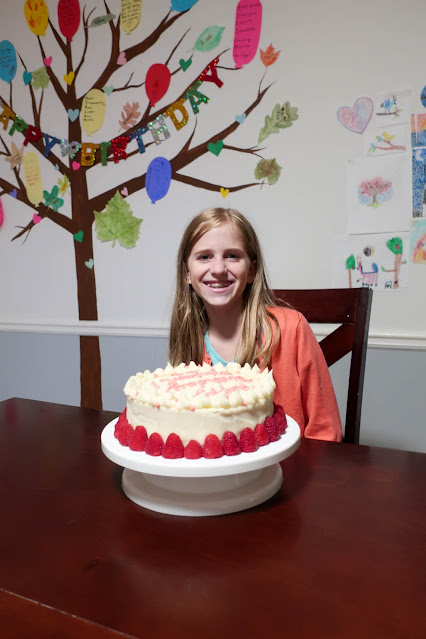 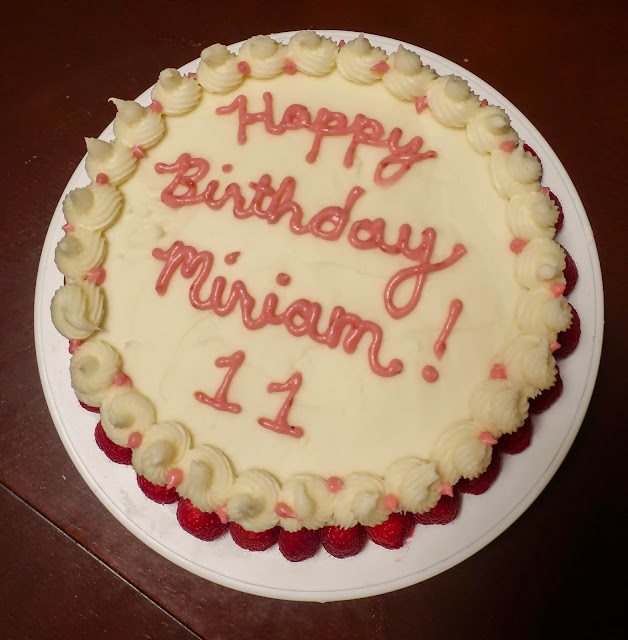 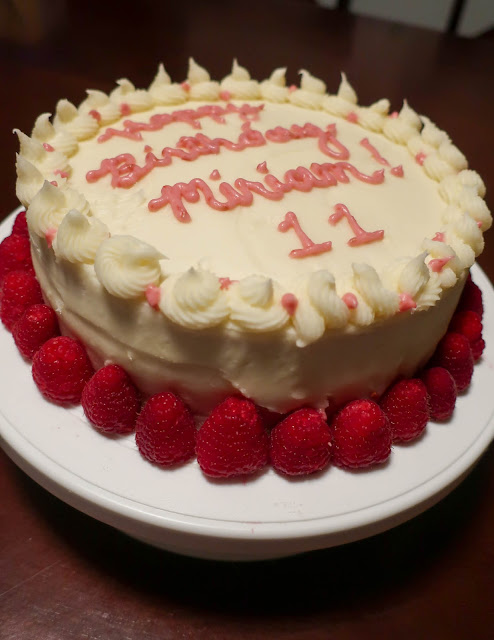 I don't remember what was said here, but it must have been pretty funny: 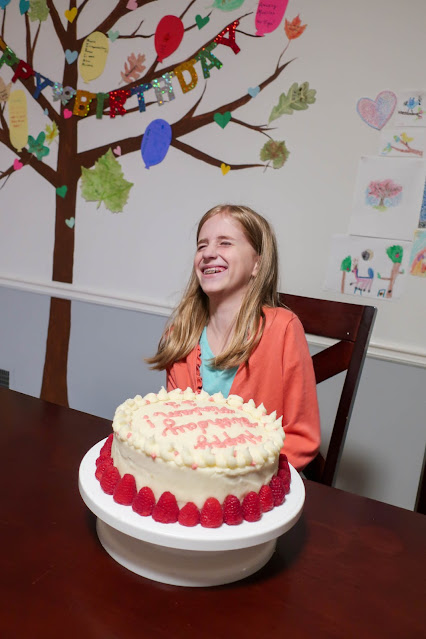 Eleven candles sure does look like a lot of candles on her cake! 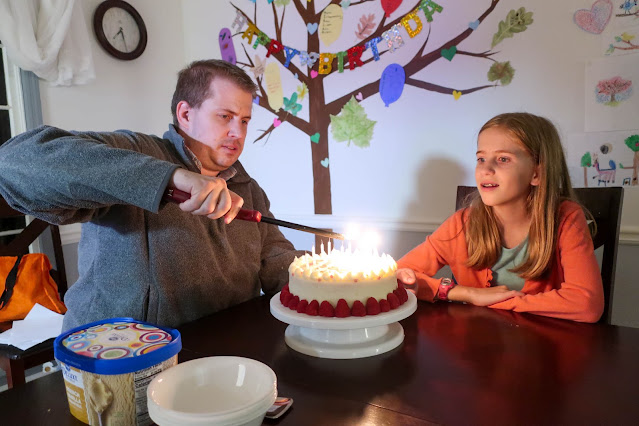 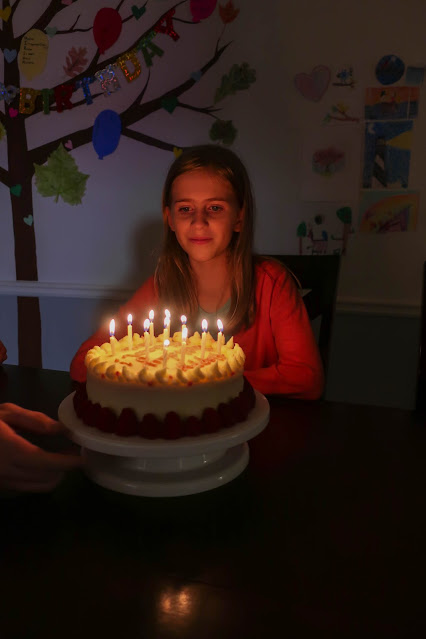 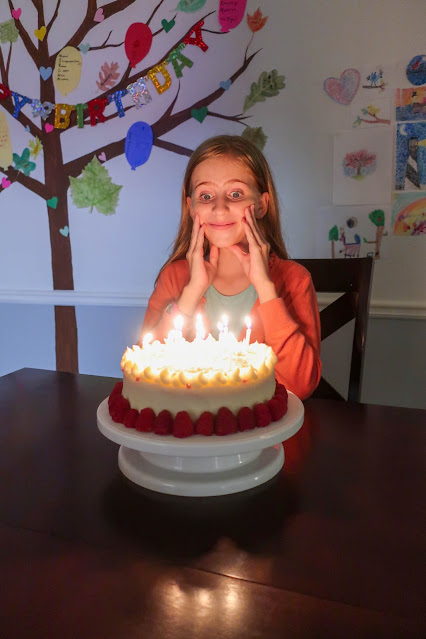 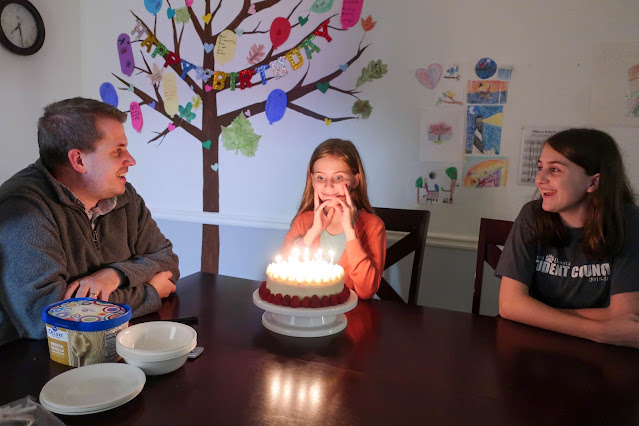 She spun the cake as she blew out the candles, which might not have been the safest thing to do, what with the fire all over it, but it sure was effective (both at blowing out the flames and also spreading her germs over every possible square inch of that cake). 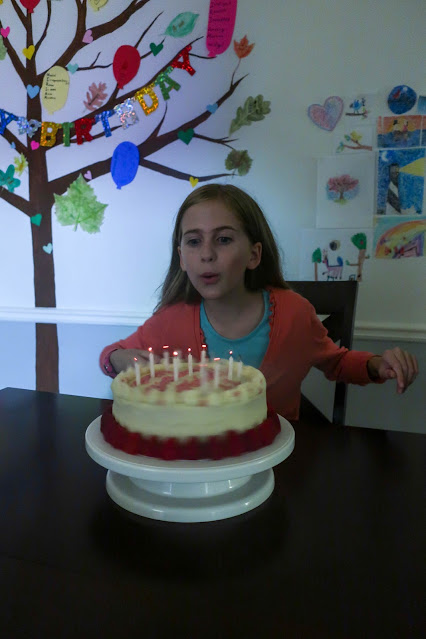 Here are the kids trying to give Miriam a group hug, but none of them understand how to be gentle so it ended up one giant chokehold for Miriam: 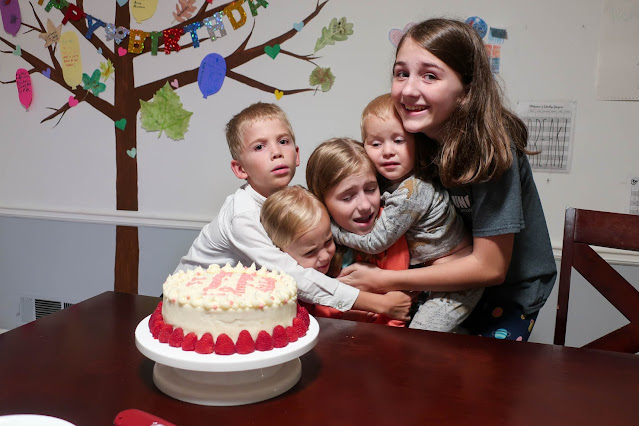 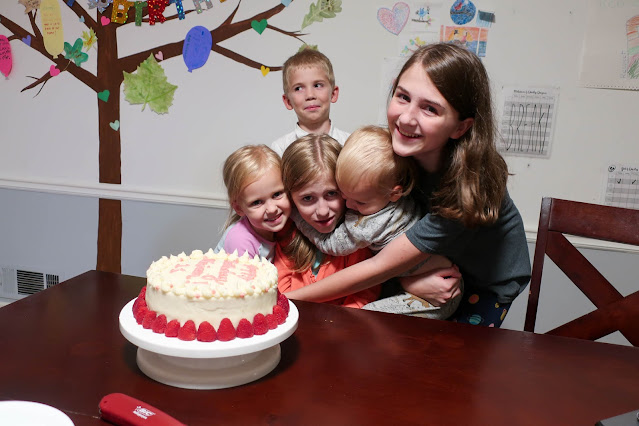 She was happy to get some breathing room...and some cake: 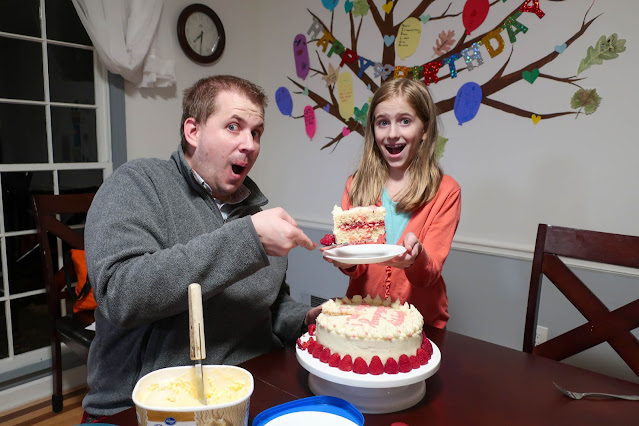 Here's Zoë, pleased to have gotten a "perfect" piece of cake (she was not impressed with the narrow sliver that Andrew had cut for Alexander because it fell apart a little bit, which just wouldn't do for Zoë, so Andrew had to cut her piece very carefully): 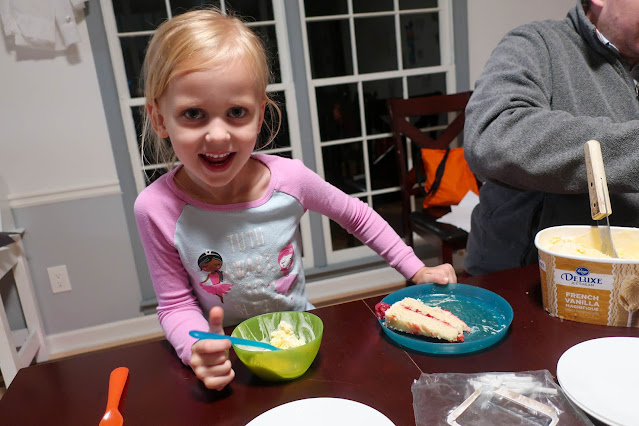 Here's Benjamin digging into his ice cream while he waits for his cake: 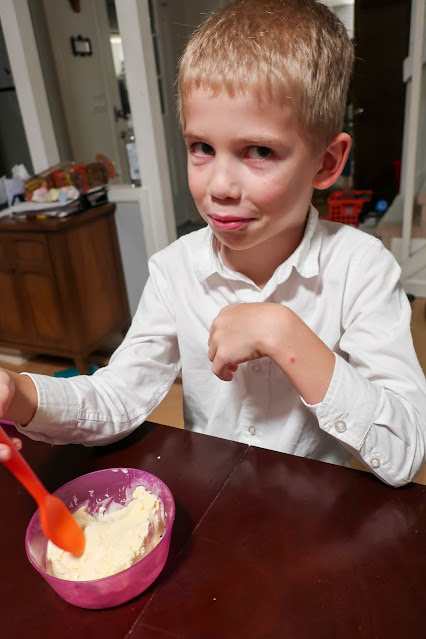 We have cake and ice cream in separate dishes at this house not because we like doing extra dishes, but because I don't like soggy cake or cakey ice cream and that dislike has transferred to several of the children. Andrew finds this strange. But...it is the way that it is.
I also don't particularly enjoy ice cream soaked in root beer or root beer infused with ice cream (translation: I don't like root beer floats). I do, however, occasionally enjoy those things in isolation of each other.
I find this strange because I feel like I'm not too picky of an eater. I don't mind if my dinner foods touch so much. I eat my vegetables. But desserts? Those I'm picky about and I suppose that's an okay thing to be picky about because the few desserts one enjoys the better, right?
Anyway, here is a picture of my ice cream free cake: 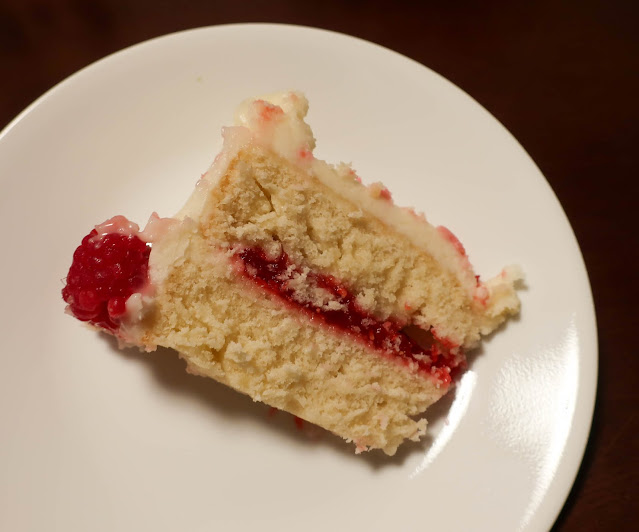 It truly was a delicious cake and I'm very much looking forward to having it for dessert again tonight!
We had a lot of fun celebrating our sweet Miriam. She came to earth mild and content and has more or less stayed that way. Though I easily admit she's exhibited plenty of sass and flair along the way, she's still a mild and content person. She gets over her anger quickly and is one of our more soft-spoken children. She no longer sucks her thumb (gave that habit up circa 2015), but has found other way to soothe herself—music and drawing and building with Lego and listening to scriptures.
Here's a lovely picture she drew of our family for primary yesterday: 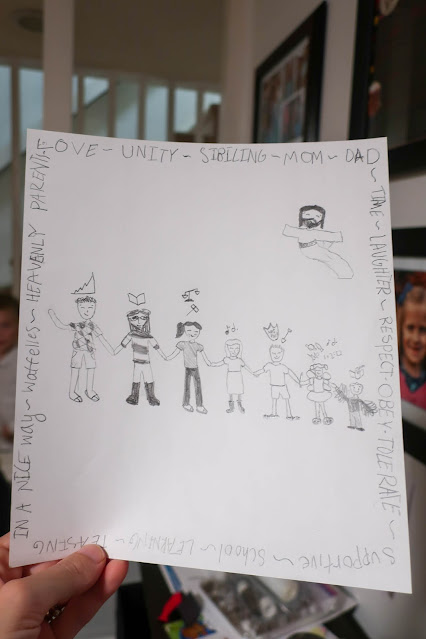 Above everyone's heads she's drawn things to represent their ambitions: a chart for Daddy, a book for Mommy, scales to represent justice and the law for Rachel, music notes for herself, a National Parks badge and a shovel for Benjamin, outer space and a ballerina for Zoë (who aspires to be an astronaut ballerina), and an owl for Alexander (who, indeed, aspires to become an owl when he grows up).

She is good at observing people and remembering their interests and is very thoughtful of her observations when she makes cards or presents for anyone. I think she'll end up being a better gift-giver than I am!
Posted by Nancy at 11:53 AM