Last night, in a very short amount of time, the heavens unleashed over 5 inches of rain on us. In fact, between 10:30 PM and 10:45 PM—shortly after we noticed the house had begun to...uhhh..."wet" itself and while we were outside desperately trying to build up a berm and convince the water to take a path that didn't include my basement—we received 1.24 inches of water! By 11:00 we had accumulated 0.75 inches more for a grand total of 2 inches in a half hour!
I've included the precipitation chart below, but you can see a table with more detail here, if you're interested: 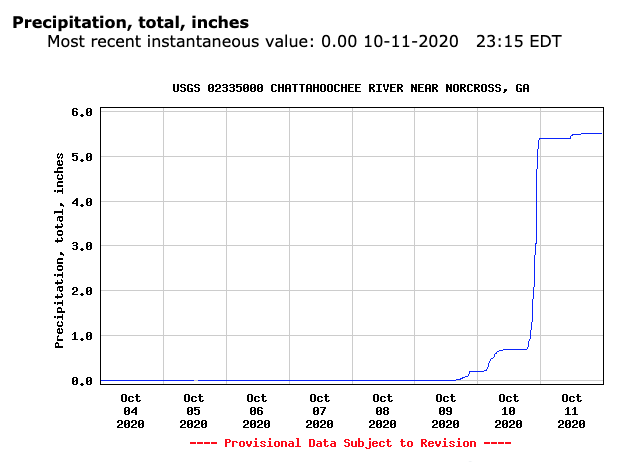 It was an almost unfathomable amount of rain, so let's see if we can fathom it, shall we?

Let's say our hill—from the top of our driveway to the crest of the hill—is 839 feet (let's say that because we measured it on a map). And let's say the houses in our neighbourhood are about 240 feet apart (again, because we measured it on a map). And let's say that all these houses are sending their water through the gutters to roll merrily down the hillside until they get to the gigantic storm drain at the top of our hill (which shoots out into the creek behind our house). And let's say that the storm drain is completely overwhelmed by this volume of water (because the creek is already swollen to overflowing and the drain can't drain into it). Let's just say all that happened in just a half hour.

Well, we suddenly find we have 6276 bathtub's worth of floodwaters gushing towards our house (as calculated here).

Here's a view of our poor hill, where you can see various streams popped up (and carried away all our lovely pinestraw): 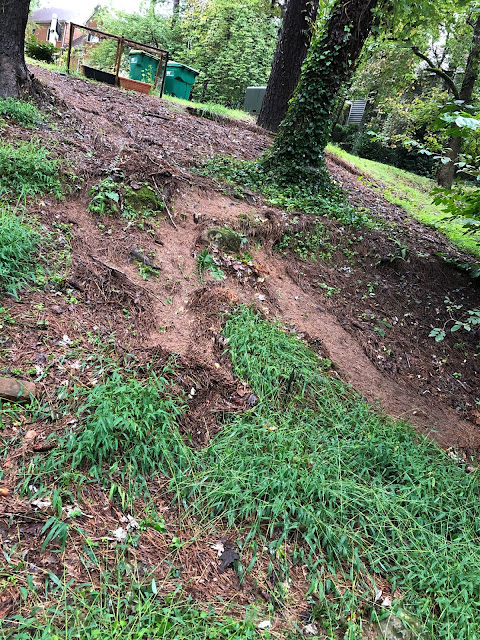 Here's the floodplain on the side of our yard (the garbage cans are sitting on top of the storm drain and miraculously didn't float away, but only because they are so full because we'd spent the morning cleaning out the storage room and threw away some things the previous owners had left down there): 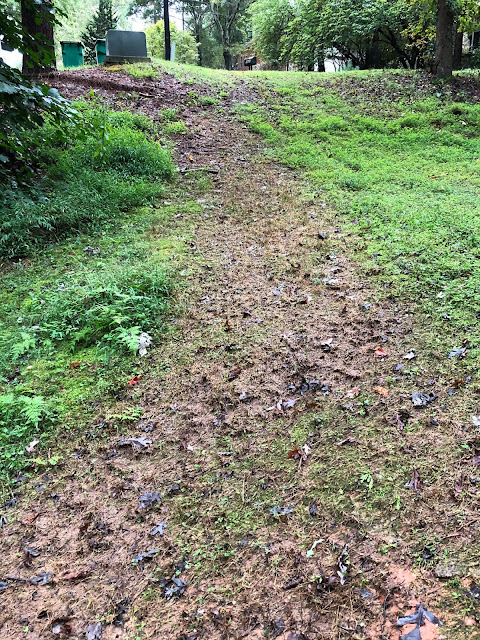 Do you see what it did to our "lawn" (which wasn't great to begin with, but which was as green as the lawn on either side of this lovely impromptu riverbed)?!

Here's a view from the backyard: 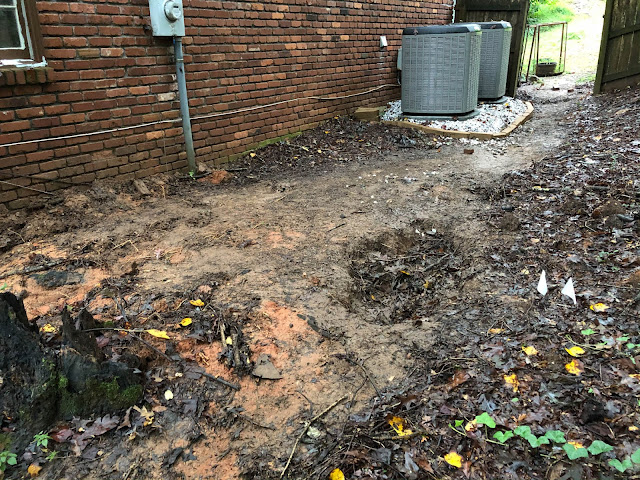 The water went around the air conditioners just fine, but probably only because they'd recently been leveled and raised and we put that lovely rock and brick border around them. So, the river (we're calling it a river because it was 6000+ bathtubs of water!) came rushing through our gate (which...is gone?) and then widened so that it was right against the house (you can probably see where—there's a little corner of old leaves by the air conditioner and that part stayed mostly dry, then it's just...floodplain) and extended 8 to 10 feet away from the house (we'll have to measure tomorrow).

Here's the lovely "sandbagging" we did around our foundation. We were just lifting up shovels full of sludge and flinging them against this wall, trying to build up enough of a barrier between our house and the river running through our yard. It's so pretty. 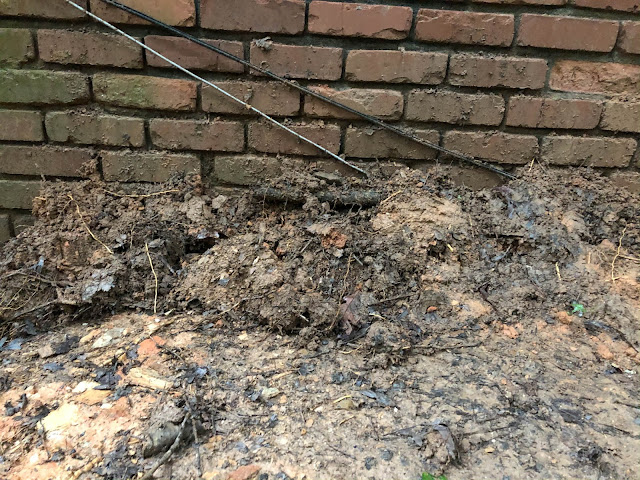 Here is the underside of our deck—which, for the record, has never had water run underneath it in all the storms we've been through here: 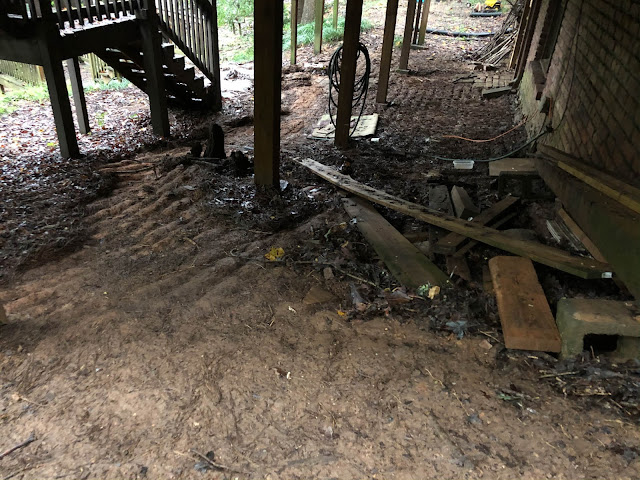 All that bare area had been covered in pine straw. And the water is only flowing that way because we diverted it. Originally it had been following the curve around the house rather tightly and entering the house where the waste water pipe exits the house. That pile of junk, which we've been slowly throwing out, was left by the previous owners. The long boards were balanced on some bricks and part of our lovely river was slip'n'sliding right down those boards and landing, as I mentioned, at the waste water pipe. So the first thing I did was move the boards and then start digging ahead of the pipe to move the water away from that obvious entrance. And then we went around the side of the house and saw how monstrous the whole river was, built up the "sandbags" around the house, and managed to curve the stream away from the foundation (instead of into my basement).

As I mentioned, we don't ordinarily get storm water running under our deck. You can see, perhaps, the little divots running along the ground. It almost looks like a plowed field, I think. That's from rain water dripping down between the floorboards of the deck for years and years. But, honestly, it usually is just covered in pine straw (and we didn't lay any down back here last year, so the pine straw had been there for a long time without washing away).

Here's the path the water usually takes—boop-de-boop, down the yard, through the fence, and into the creek: 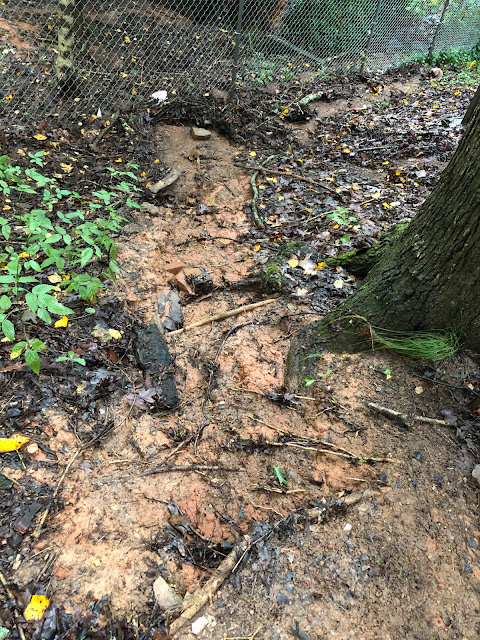 We are planning on putting in a dry creek bed to help rain water find its way a little easier, but haven't done it yet because we just have so many other darn projects calling for our attention. We'll get around to it soon, I hope. In the meantime, let's all cross our fingers that no more hurricanes will choose to follow this exact path because Sally has me fixing my roof and Delta has me fixing my basement and I just don't think I can take another hurricane in my life right now. And we don't even live along the coast! It's not like we were hit with the full force of this thing!

Anyway, being out there in a storm like this was kind of exhilarating. Andrew likened it to hiking Sulphur Creek, on a "high" year...but, like, in the dark...with being blinded by wind and rain.

Here are a couple of pictures a neighbour posted of one of our favourite crawls along the Chattahoochee: 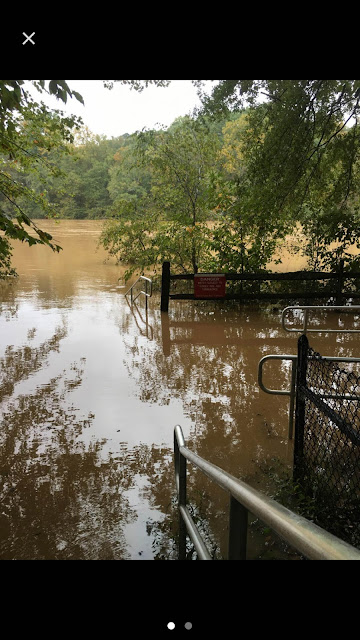 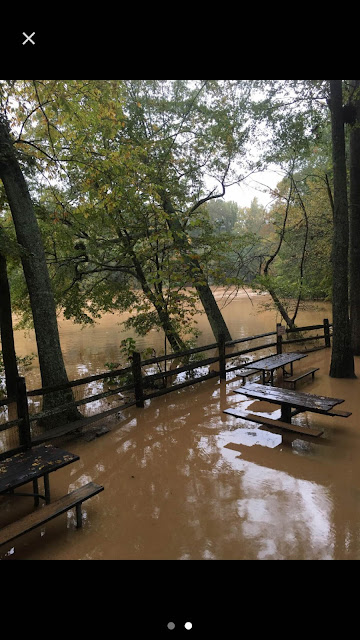 Hiking there will be a mess for a while! This neighbour said that he hadn't seen flooding this bad since 2009 (though, in his opinion, 2009 was worse). Still, this means that a storm of this nature is a little...beyond the usual scope of things (even for Georgia, which has blessed us with several deluges).
We were a little sad to find more wet carpet in the girls' room this morning, but I put out a plea for fans on our ward Facebook page and before I knew it we had fourteen fans running in our basement! There were huge, industrial-strength fans, and smaller home-use fans, but all together they've managed to dry things up pretty quick (we also turned on our fancy new air conditioner to "dehumidify" mode and that has been sucking moisture out of the air).
Andrew did go out to buy a couple of fans this morning (which I already factored into the total of 14), so that (thanks for the advice, Sharaun!) we could have a few on hand for when anyone else needs to borrow them (because I certainly don't want to have to use them again (but we do live in Georgia, so chances are high that I'll have to)). He managed to snag a carpet fan at Home Depot (one of about five left). They didn't have any fans available to rent and all their other fans were gone (they didn't have box fans or anything). At Lowe's he managed to get a box fan but they were completely out of carpet fans. So clearly we aren't the only ones in the area trying to dry out our carpets! 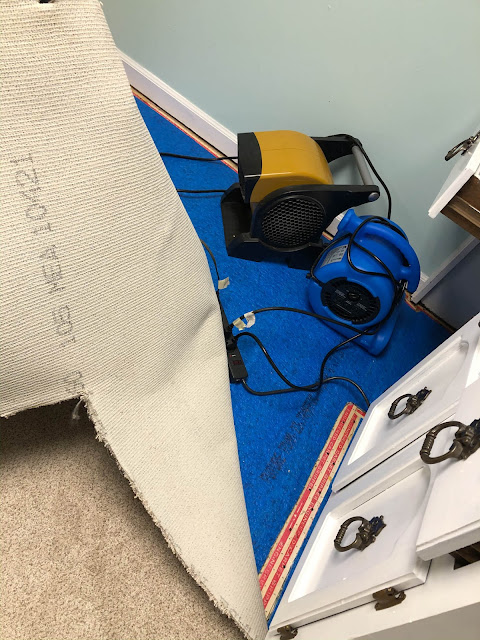 Things are much drier down there this evening. We cut out quite a bit of our carpet padding and will put some new padding down before we re-stretch the carpet, a task I'm not looking forward to, but I guess it's better than moldy carpet.
Posted by Nancy at 12:23 AM