We've got the power!

Sometimes when I read dystopian novels I think to myself there's no way society could descend into chaos that quickly. And then things like this happen and I think to myself society could definitely descend into chaos that quickly.
Our society depends on so many things to function smoothly—trust, electricity...and a few other things.
Take those things away and life feels somewhat fractured.
Fortunately, as we've become increasingly reliant on technology in our lives, I can remember the good ol' days of my childhood when we were less reliant on technology. Take automatic garage doors, for example. It seems like everyone has one these days, though I'm not sure why...
I've been trying to remember when we first had an automatic garage door. I think we had one in the High River house, which felt so fancy because our house on Sutherland Street had a pull rope and had to be raised and lowered manually—a skill that comes in handy when the power goes out! You basically need two people to open the garage door when it's on an automatic track: one to pull the emergency release from the track and one to start lifting the garage. At least...that's how ours works. But then the nut holding the garage to the arm of the motor fell off and we were free to raise and lower the garage at will (we looked for the nut but couldn't find it so we'll have to get a new one).
We realized this morning that our water heater is gas, not electric. Yesterday we were rationing hot water, thinking what we had in the tank was it (because our water heater at our house on Hummingbird Lane was electric and that's we experienced a few power outages there as well). Today I read a text from a friend in our ward who lives a block or so away and she mentioned her gas water heater and I was like, "Oh! We have a gas water heater, too!" So we were able to shower and wash dishes today, which was nice.
I was washing the dishes—by hand (which really doesn't seem to take much longer than simply loading the dishwasher, to be honest, though I guess it's water usages that we're concerned about, not time, necessarily)—and was stacking them on the counter like I always did growing up (because my family did not get a dishwasher until the year 2000). Plates can be leaned against the wall to dry, cups can be engineered into tall pyramids. It's really quite fun. But there wasn't a great place to put the silverware.
I wish we had one of those cool draining racks for silverware like we had growing up, I thought to myself.
And then I realized that I had one of those. In fact, I had an expensive, top-of-the-line draining rack right at my finger tips! So I opened the dishwasher and started loading the pre-washed dishes inside to dry.
We were really figuring out this no-power gig. Life was no longer feeling desperate.
We had things under control.
So we did our schoolwork again, though today we read our book (finished The Little Prince) tucked in bed rather than at the kitchen table because the chorus of all the generators running in the neighbourhood was driving me a little crazy, but the noise from our generator was worst of all (and the noise was the absolute worst in the dining room where we typically do a good chunk of our morning work). The kids didn't mind too much. 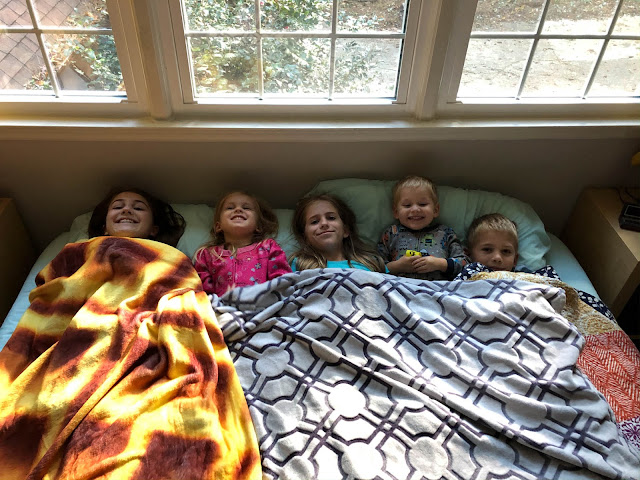 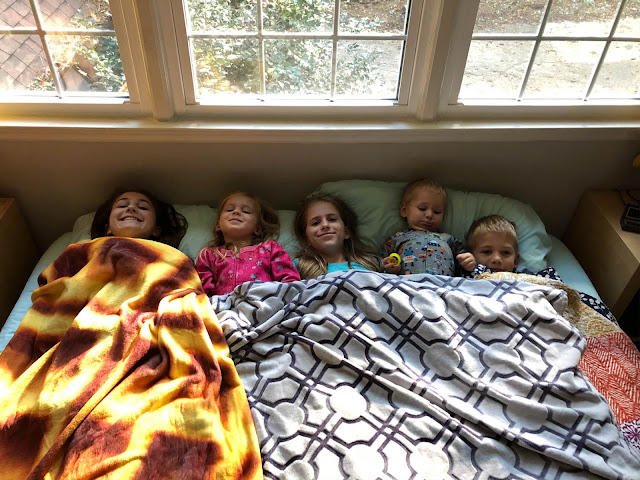 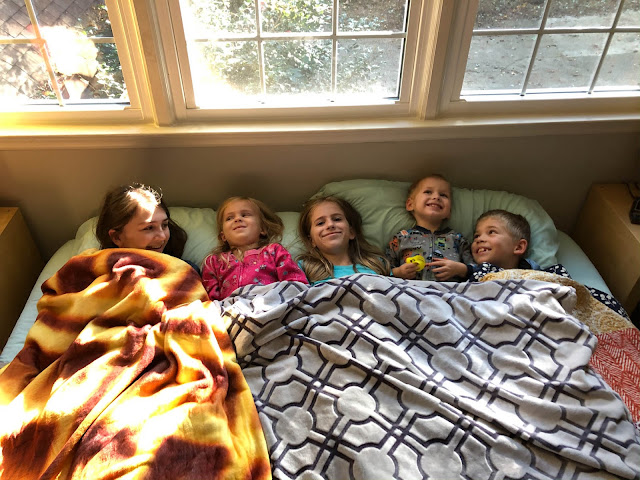 We did our writing response. Some kids wrote about the ending of The Little Prince while others, including Zoë, wrote about the storm. Zoë said, "The storm last night caused [a] power outage. Because it was sooooooo bad that we had to use flashlights." 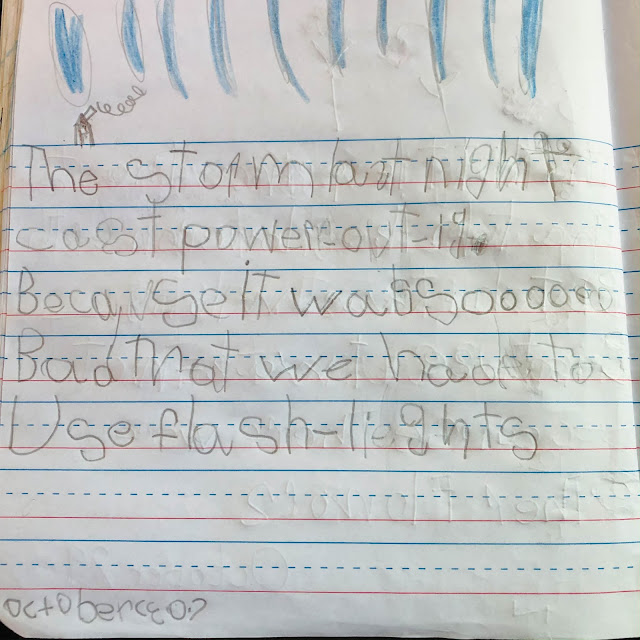 All the spelling is her own. She really has a knack for spelling conventions, though I also appreciate when she sounds things out, like "power-out-ig." Her use of "cast" gave me pause as well. At first it sounded to me as if the storm was magical and was casting a hex on us, but later I realized she meant "caused." Let's all note how carefully she formed (most of) her esses today! She consistently writes S backwards and I've tried to correct her several times, but today she asked me why her notebook had the alphabet on the inside cover and I told her it was for reference—so she could check on her letter formations in case any of them (such as S) are tricky to remember. And apparently she decided to consult it.
Sometimes I feel badly that I haven't "decorated" a dedicated school area and hung up alphabet charts and so forth for my kids but...they seem to be doing fine without it. I mean, who needs to look at the alphabet every day? They'll be fine without that, right?
Sure.
Anyway, here's the cat sitting in the open window, dreaming of being an outside cat: 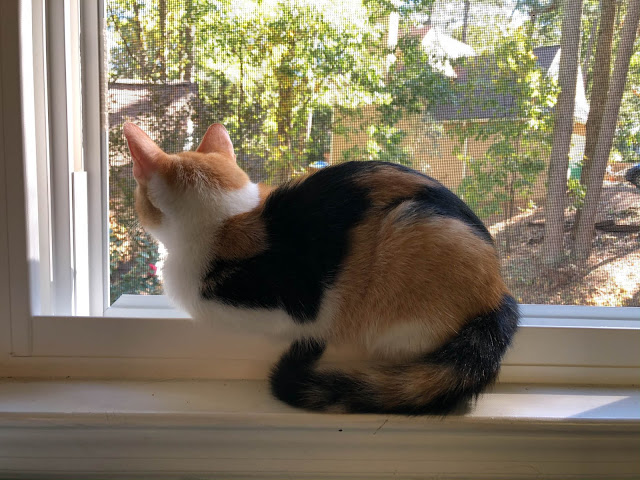 We were really rocking this no-power thing. We even managed to do our science reading today since we had managed to rig our internet up to the generator and everything (something we hadn't quite managed to do yesterday, though we did go through some of our science encyclopedias).
Andrew ran out in the afternoon to return our library books, which were due today, and to get some more gas for the generator, because we assumed we would need gas to last us through the weekend. He came back a few minutes later while I was...I feel...still working on math with the kids? I don't know. Anyway, he was telling me about the drive and how there were still a lot of trees down on the power lines on the main road. "But there are workers out there trying to fix things right now," he said.
And at that exact moment—I kid you not—lights flicked on all around us.
Who even knows why we had so many lights on in the house? The power went out at 5:30 in the morning we were (mostly) not up. Some of us had just barely gone to bed. I guess they were on because even though the power had been out for 34 hours (5:30 Thursday morning to 3:30 Friday afternoon) we all kept flipping switches any time we'd walk into a room, expecting the lights to magically turn on.
They never did...until 3:30 this afternoon.
The kids were excited to have a little movie night (the 2016 Ghostbusters) with pizza, and then we headed out for a little evening stroll. When we left the house, Andrew noticed that a package had been dropped at our door.
"Miriam!" I called out, knowing the contents of the package. "It's for you!"
"What is it?" she asked, confused.
"Your birthday present," I said.
"It can't be! It wasn't supposed to arrive until November 1st!"
"And the power wasn't supposed to come back on until November 1st, either, yet here we are! Open it!"
So she ripped into the package standing there, on the driveway in the light of the silvery moon (and the streetlamp, which was on today for obvious reasons). She loves it! 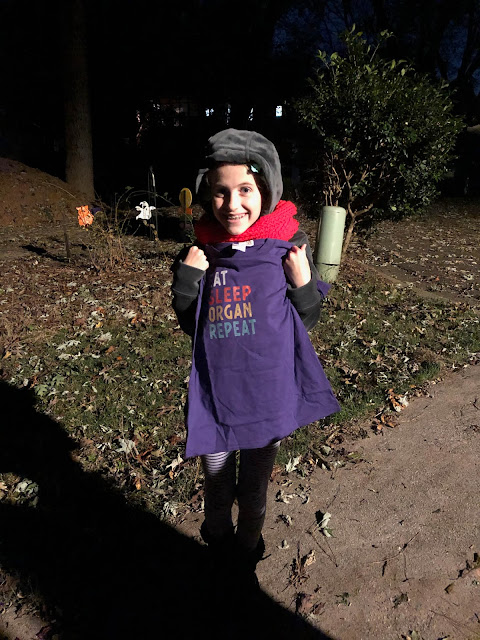 We joked about how maybe it was November 1st and we'd all slept through Halloween, but that idea made a few of the younger kids a little upset so we had to drop that joke pretty fast.
Miriam's hair is in foam rollers for her Halloween costume (that's why her head/hood looks so big). Zoë's hair is in rag rollers for her Halloween costume, too. And I forgot to take a picture of them together last night so I hope they don't wake up and take them out before they let me do that.
The big kids have stuck with their costumes for at several weeks now and we've been slowly planning and working on them. Zoë and Alexander, on the other hand, have been changing their minds every two seconds! I think they've just about settled on their wants, though their costumes still need some finishing touches.
I don't know why we're going through all the trouble, since we don't really plan on trick-or-treating or anything this year (100,000 cases of COVID-19 today locked that door for us (it was already closed, if we're being honest, but these numbers are sealing the fate of this year's Hermit Halloween)). For cute pictures, I guess. For something diverting to do in the middle of this marathon of chaos we've been enduring this year.
Anyway, we have power!
And tomorrow is Saturday! And Halloween! And a full moon (a blue moon, at that)! And the end of daylight saving! So...pretty big stuff happening!
Oh, and the girls insisted on holding a Halloween Heist, so I guess we're doing that, though I don't know what the rules are or what their secret plans are (they've made secret plans and decoy plans and maybe decoy crowns).
Posted by Nancy at 12:49 AM