Not last night but the night before I was ripped from my sleep when the pad-mounted transformer in our front yard exploded/blew/failed. Whatever it did, there was a tremendous bang and a flash of light and our windows were open and I'm a pretty light sleeper and...it was a terrifying way to wake up.

I quickly identified the sound as a failed transformer (though I didn't know it was our transformer until later) because, well, the power had gone out. So I figured I may as well go to sleep (there's not a whole lot to be done in these scenarios). I was just about calm when I heard the thunderous pitter-patter of little feet followed by a frantic banging on my bedroom door.

Evidently the boom of the transformer blowing had woken up Alexander as well.

Here he is talking about his point of view in the morning. He explains all about how he couldn't find the doorknob because it was night and the power had gone out and so he felt confused (listen for the second time he says confused (at the very end of the clip); I can't get over how adorable he is).

He got to sleep in our bed.

He had already fallen back asleep and I was just drifting off again when I heard a big truck rumbling down the street. They stopped right outside of our house, switched on some bright lights, turned on a noisy generator, and got to work clinking and clanging around in our transformer unit. Which I was ultimately very grateful for, even if I was the only person in our house who didn't manage to sleep through it. 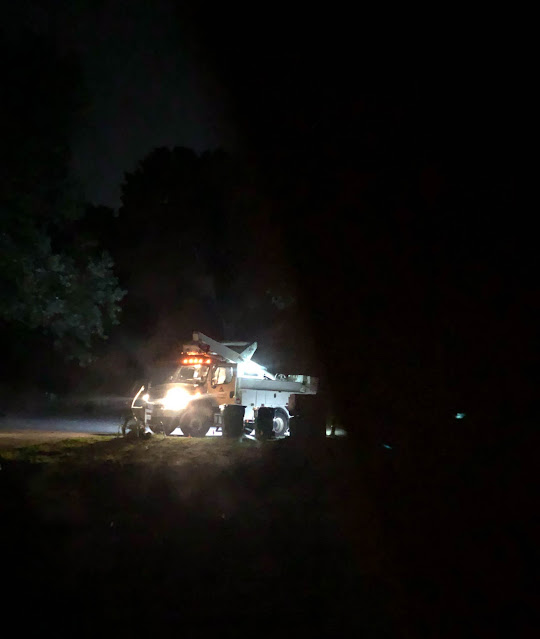 All in all the power was out for just a few hours. I'm impressed with the speed at which the electrical company was out here fixing things. It made me think about how long and hard they must have been working when we've had our massive blackouts around here.