I haven't been writing as often as I should (because we're busy trying to cram two years of togetherness into a single week and...that's exhausting) so already my timeline is blurry. I do know for certain that we haven't had a single day of truly warm-enough-for-the-pool weather (but that we've been going to the pool a lot, anyway). I think the first day we took Grandpa to the pool was on Monday and I believe that it was supposed to have stormed the whole day, but that it ended up clearing up a bit so we headed over to the pool in the afternoon to do some polar swims.
Here's everybody inching their way in: 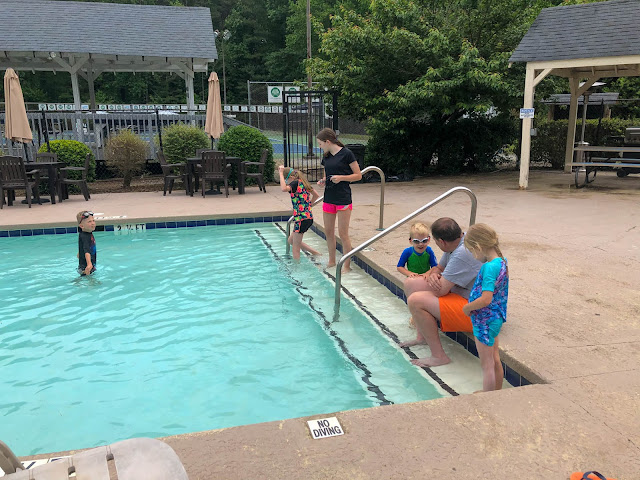 And here's Zoë taking the plunge: 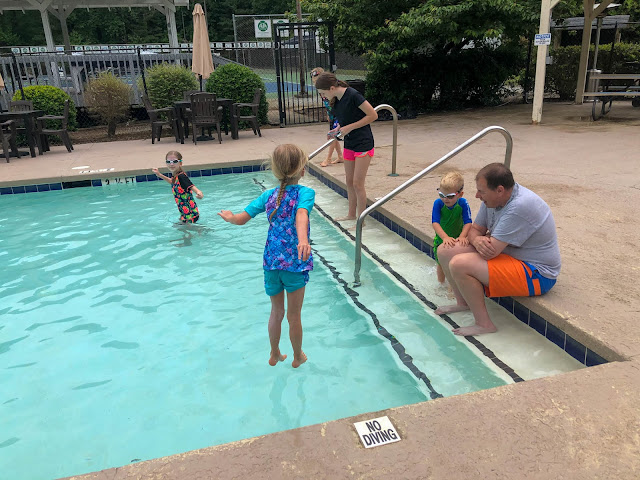 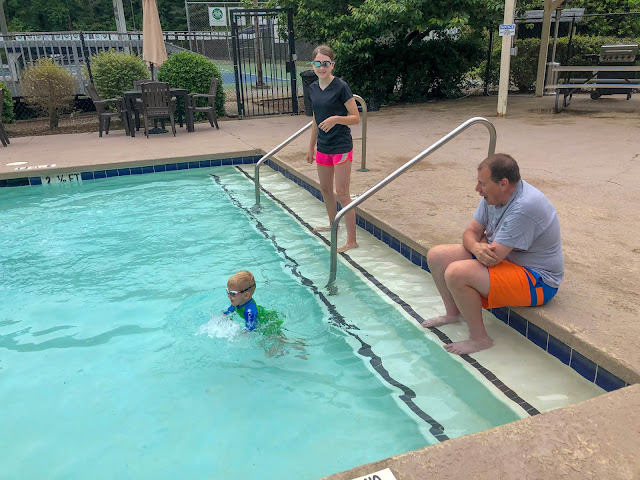 The (biggish) kids spent a lot of time in the deep end with Grandpa and Daddy, while Grandpa gave out some diving tips. He had everybody at least diving off the side of the pool (aside from Zoë and Alexander) and even had a few people diving off the board (Daddy and Rachel, specifically). I...already know I can dive...I just don't love diving so I abstained. Plus, somebody had to watch the baby.
And now I won't have to work on diving as much with the kids this summer (so, thanks, Grandpa!).
Here's Zoë jumping off the diving board: 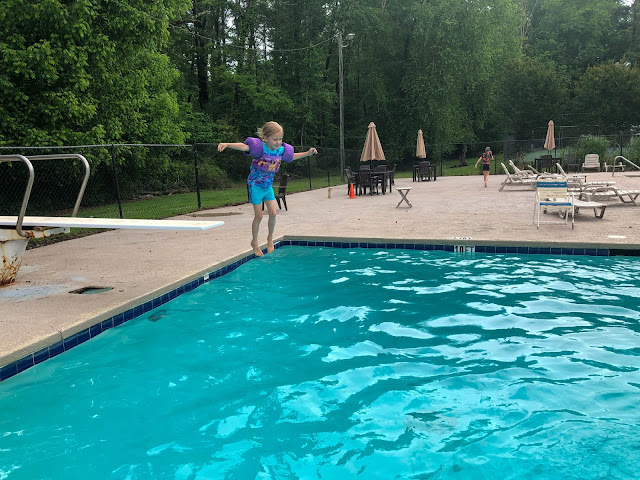 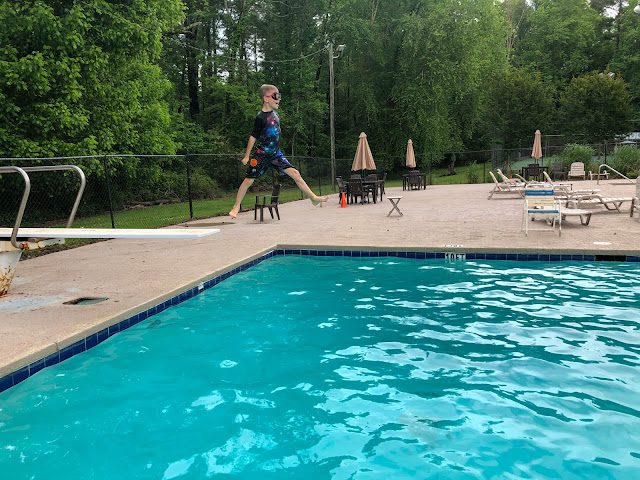 Here are the kids leaping off the diving blocks (they did some diving, too): 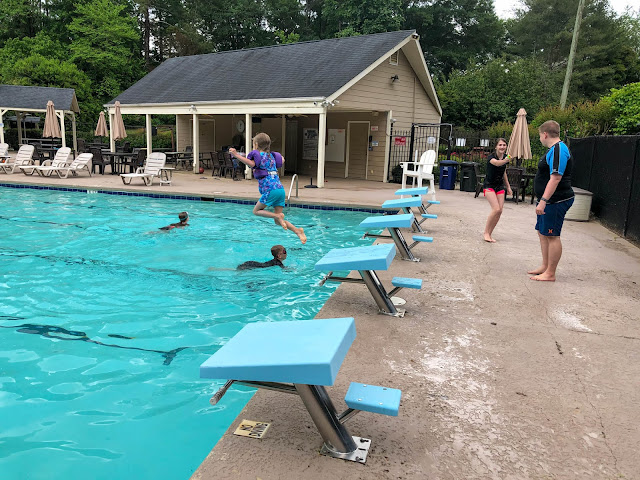 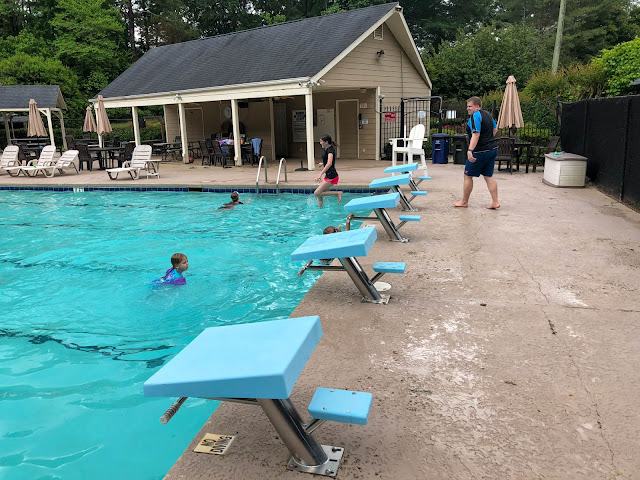 And there was a little bit of pushing/throwing of children into the pool: 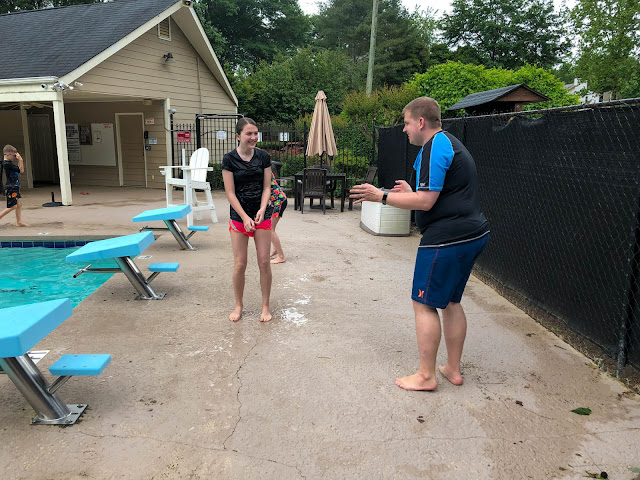 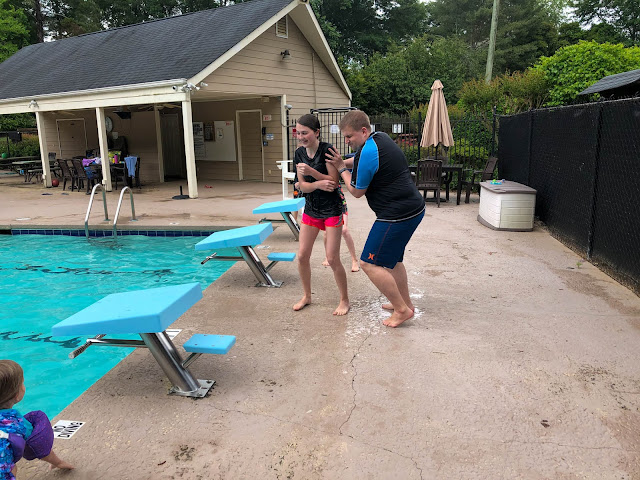 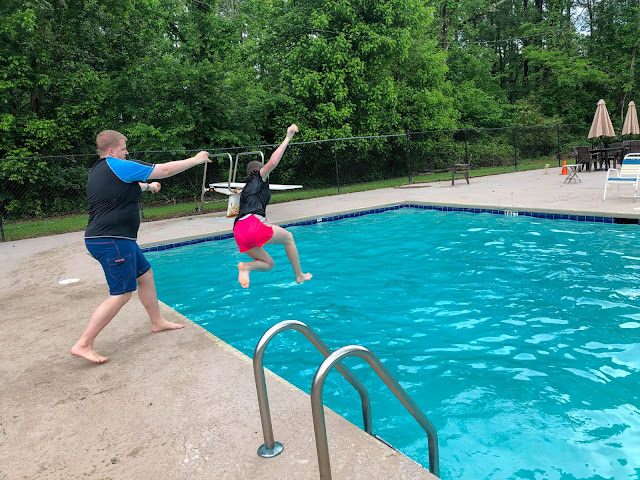 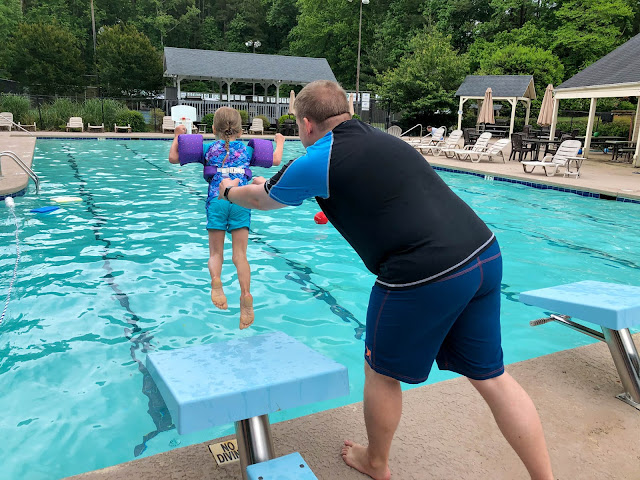 Here's Grandpa spending some time in the shallow end with Alexander: 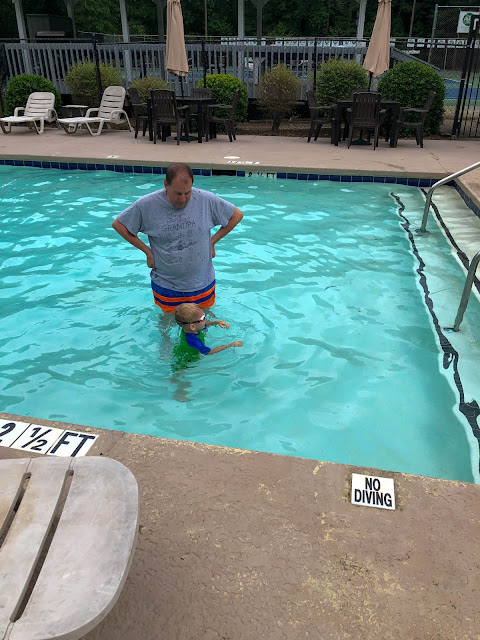 And here we are back at the deep end again, with Andrew: 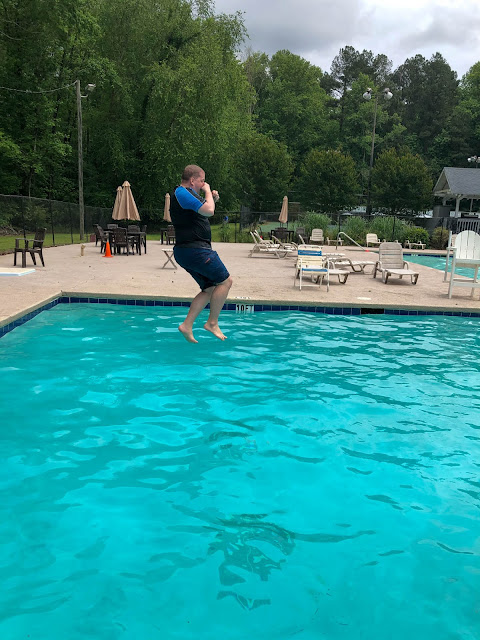 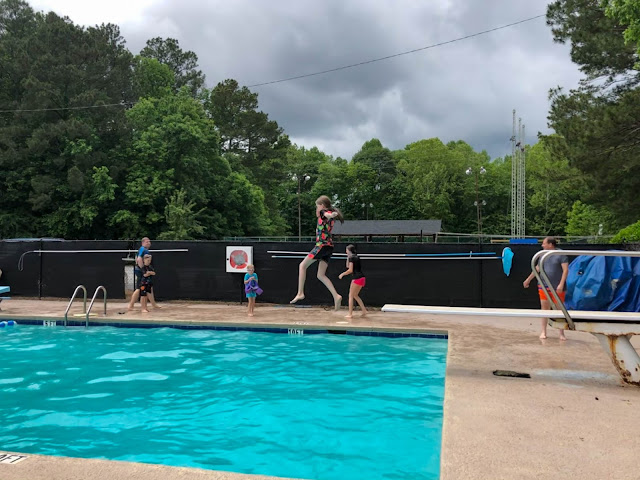 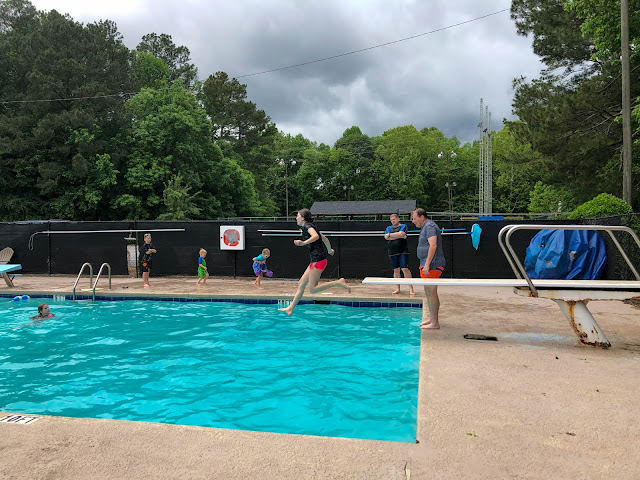 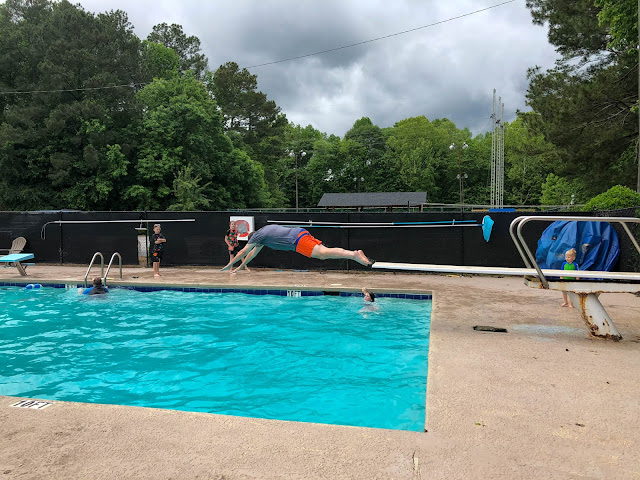 It's a good thing I took a picture on Monday because he's been avoiding diving since he got some water stuck in his ear (one of the reasons I dislike diving, honestly). Here are some pictures of everyone else not executing lovely dives: 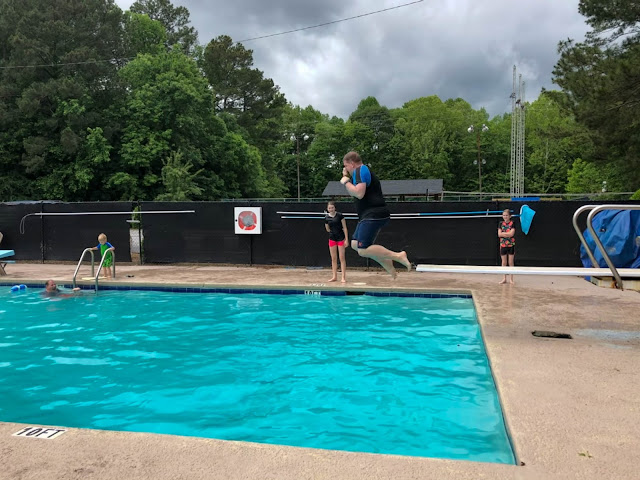 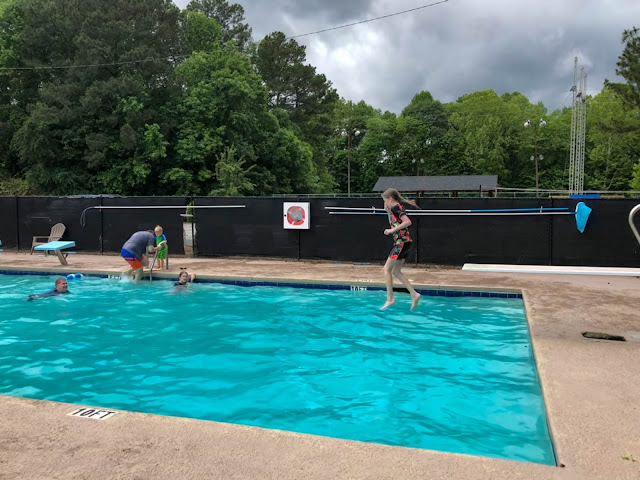 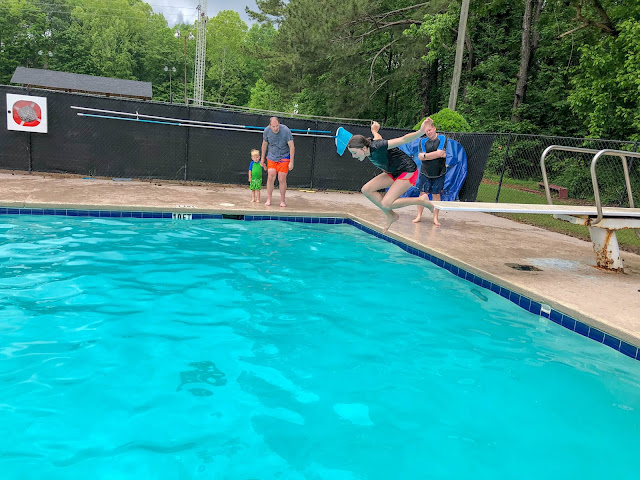 But I also have evidence that they did eventually get it. Here's Andrew: 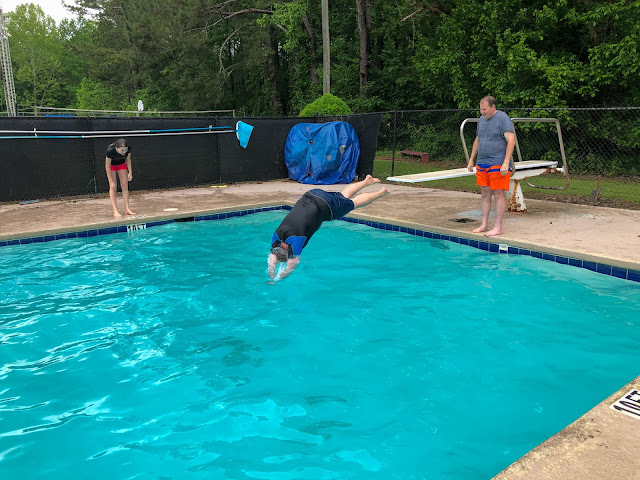 And this, believe it or not is a picture of Rachel finishing a dive. Really it's a picture of Grandpa raising his arms and saying, "Heeeey!" because she managed to dive (I was just too slow in taking the picture to get anything other than her splash, but she did a good job): 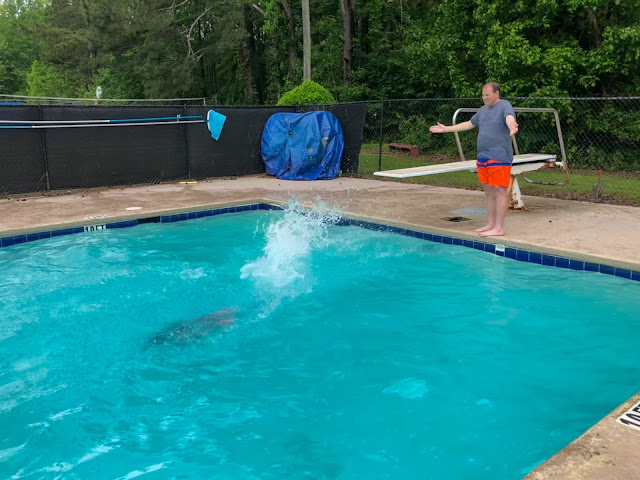