Happy Halloween from these trick-or-treaters!

Halloween seemed to take forever to get here (because my kids started planning and counting down way early) but then once it was here it really seemed to pounce on us. Somehow I'm always scrambling on Halloween and it seems like Andrew frequently has had to work on Halloween (he had to work Halloween evening again this year), so I was grateful that Grandpa was able to come over for the most chaotic dinner of the year.

I dunno. Something about dressing a half dozen children in finicky costumes while trying to temper their excitement enough to get some healthy food in their bodies before sending them out door to door collecting candy gets me feeling like Cinderella.

"Cinderella! Fix my hair! Attach my breastplate! Put on my arm bands! Change my diaper!" Fortunately, in addition to Grandpa's extra hands (that even blew the leaves from our driveway and back deck), my big kids are pretty good helpers and are mostly self-sufficient (though I did have to help a bit with hair). Benjamin's costume was so easy that he was no problem.

So it really wasn't too bad.

(And tying on Zoë's arm and leg bands takes about a half hour.)

Anyway, we got out the door around 6:30 and Benjamin lived out his dream of trick-or-treating with his friends rather than with me (though it would have been cool to know about his designs beforehand). It actually ended up that 90% of the neighbourhood kids ended up serendipitously meeting at this friends' house and we all walked together. And then Benjamin and his friends (with some parents) went off ahead while Alex and Zoë and some slower kids (and some parents) stayed behind.

We don't get a ton of trick-or-treaters in our neighbourhood so it's probably best that we spread the kids out a little bit.

The funniest part of my day was when I came downstairs in my last-minute Rosie the Riveter costume and Benjamin says, "Who are you supposed to be? Wait! I know! Propaganda!" 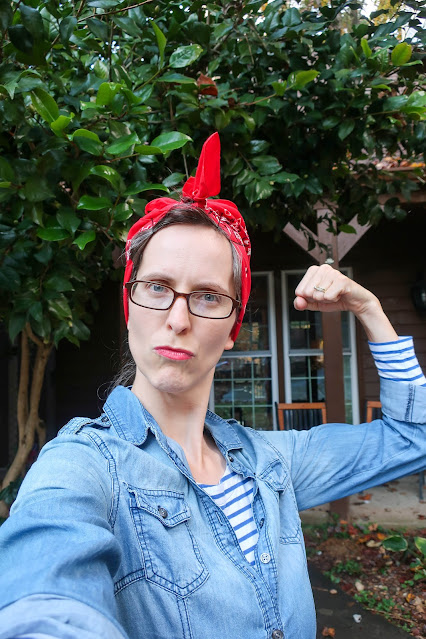 Here's Phoebe in her little Yoda/Grogu hat I whipped up a couple of weeks ago and a kachabia from Tunisia that my friend Sara picked up for us when Rachel was that size: 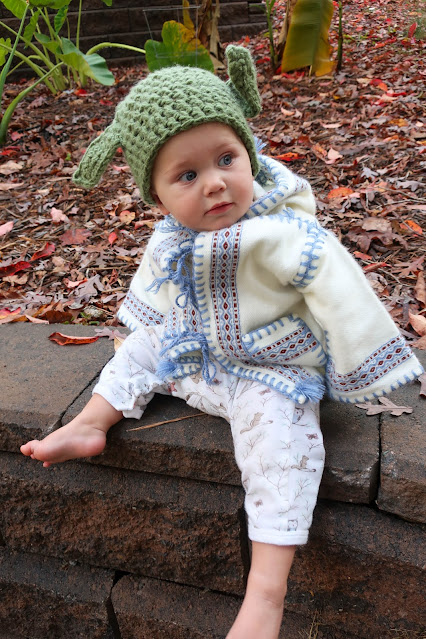 A lot of Star Wars inspiration came from that area of the world, so we thought it was fitting for Phoebe to wear with her costume. She's worn it a few other times as well because it's both warm and adorable...but it's also a little too cute to just play around in...so we only use it for outings where she won't be rolling around on the ground.

As much as Phoebe seems to like Yoda/Grogu (she's in love with our stuffed animals of this alien species and loves to "visit" the Yoda and Grogu in Andrew's office), she does not like hats. So she spent a lot of her time yanking the hat off her head and wasn't in the mood for pictures. 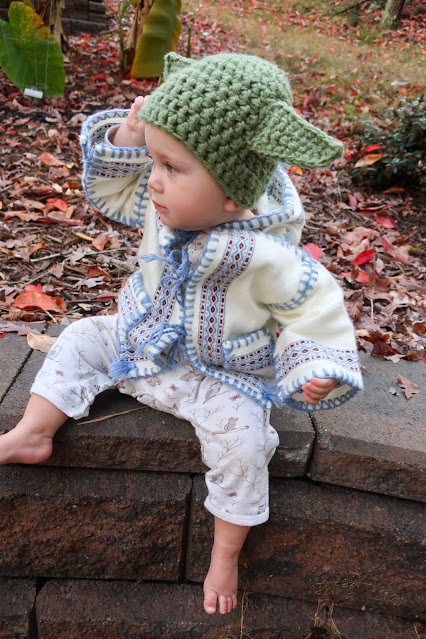 I've been putting the hat on her head when we go out walking, just to help acclimate her to the idea of keeping a hat on her head. Last week we went on a rather late walk one of these evenings, but it was also a fast walk because Zoë and Alexander took their bikes and the rest of us jogged behind them. But when we got to our second-to-last turn before arriving home I noticed that Phoebe no longer had her hat on! That meant we had to turn around—in the dark!—to look for this hat that I had only recently finished crocheting.

I sent the three little kids home to start getting ready for bed while the big girls and I took the longer way home to look for this silly hat. Phoebe was no help. We asked her where she had dropped it and she just laughed at us.

We found it waaaaaay back at the very first turn we'd taken in our walk. I was just glad to have it because although I might've had enough time to whip up a new hat, I knew I didn't have enough of that same green yarn (and didn't really feel like hunting down more). And when we returned home we found the kids all in their pyjamas, brushing their teeth without fighting! 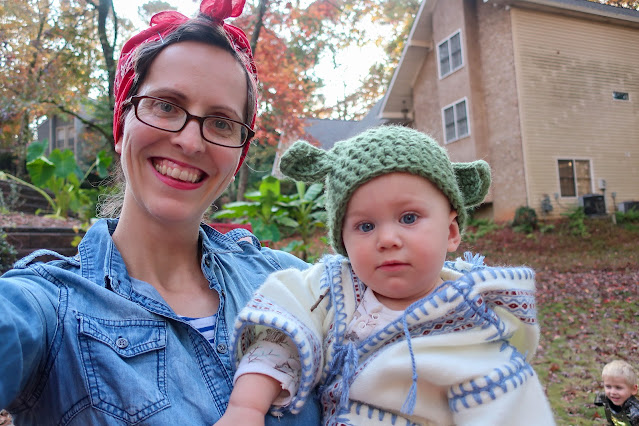 Anyway, here's Alexander. He went through a lot of costume ideas. He'd decided on one thing (I can't remember which), but when I brought home the lederhosen he was convinced he wanted to wear that for Halloween. But then one day he announced, "I don't think I want to be a lederhose [sic] anymore. I want to be Thor!"

So I mentioned to my neighbour that I wasn't sure how I was going to piece together a Thor costume on such short notice and she said, "Well, I have a gladiator costume just sitting around. My aunt sent it for J—. It's size 5, but J— is only 2 so he won't fit into it for a number of years!"

Alexander saw the gladiator costume and knew it was his destiny (though the helmet was a bit big). He almost wore an owl hat with it, but decided against it at the last minute. He was explaining to our neighbour why he couldn't wear the helmet (his argument was basically, "I just don't want to," which is fine) and she was like, "That's okay! When I've seen gladiator movies and things, usually the main characters don't wear their helmets a lot so you can see their face! And we like seeing your face!"

So here's his so-happy-to-be-getting-all-this-candy face: 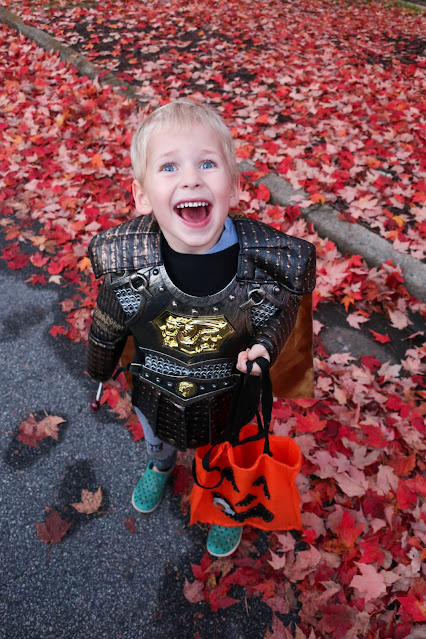 This tree is so extra during the fall. It's a neighbourhood favourite. 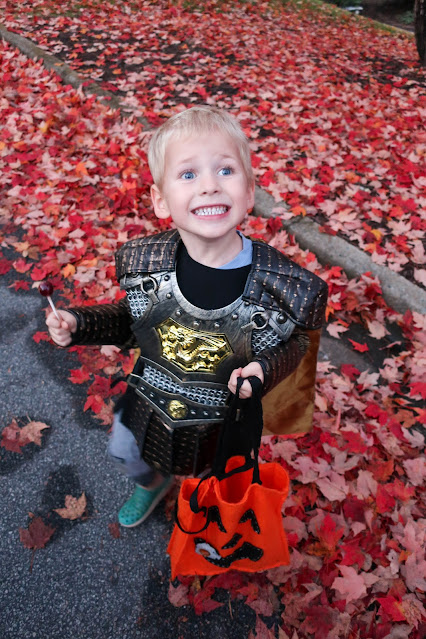 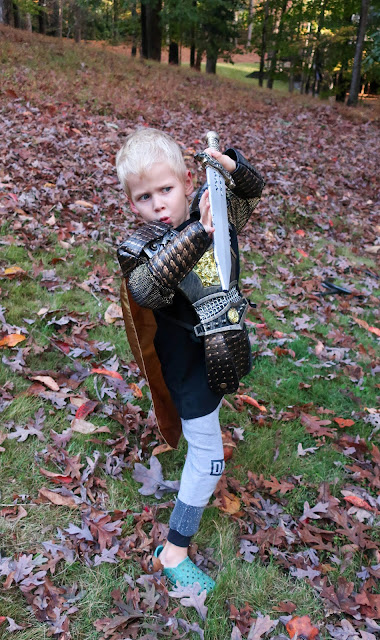 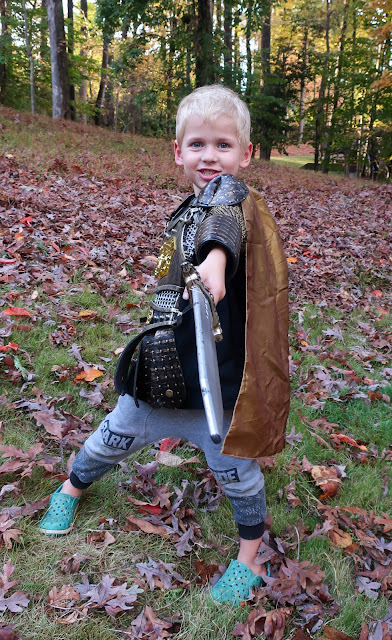 Zoë was She-Ra: Princess of Power. I don't even know that she's watched very many episodes of the reboot, but she's watched enough that she knew that was what she wanted to be. She combed through her clothes to find a white-ish base for her costume, dug out the Snow White cape from the dress-up bin, and told me that the "only" things I had to worry about were the gold parts. I bought some sparkly canvas material and had Auntie Josie help me cut it out (and punch holes) while I was in Utah. Auntie Josie is big into leather working so she has all the right tools for this. 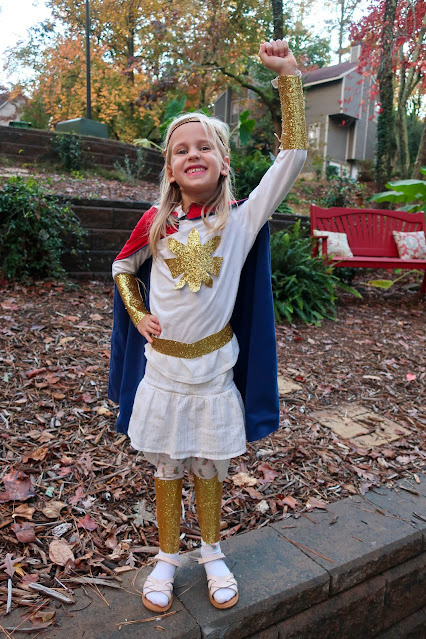 We actually had a bit of a tragedy when Zoë wore her costume last week for our little neighbourhood gathering. She got a little rough and ended up pulling the thread out of all the holes on one of her armbands.
I poked new holes between the holes that Josie made with her tools (using an awl from our pumpkin carving kit) and that worked fine but Josie's holes were much better suited for lacing than my holes were, so I'm glad she was able to do the bulk of the hole-punching for us with proper equipment (even if she wasn't around to make repairs for us). 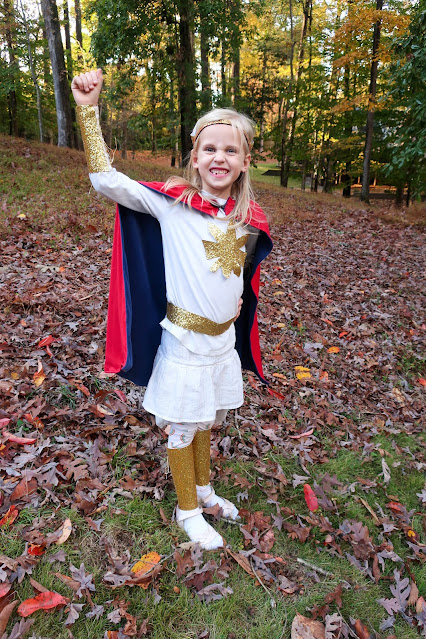 Benjamin was Percy Jackson. He wanted a Camp Half-blood t-shirt, which I got for him. He wore this with blue jeans and carried around a pen (since Percy Jackson's sword turns into a pen for safekeeping). No one really understood his costume (except my friend Brooke—the girl who illustrated my book! She loved it!) and he got tired of explaining it (or worse, being accused of not wearing a costume).
He has been so responsible about his laundry this month, always making sure his Camp Half-blood shirt was clean and ready every time he needed it. 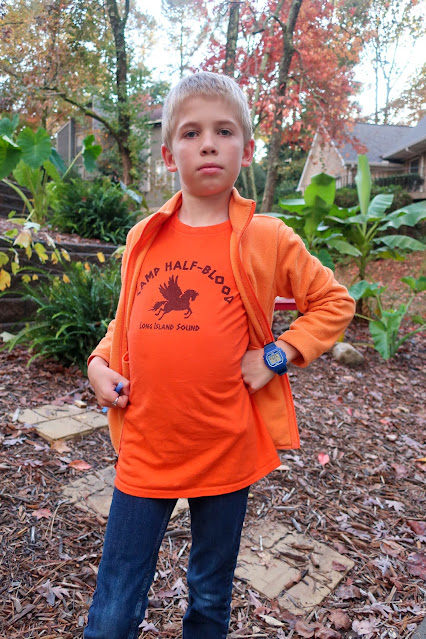 Here he is unsheathing Riptide (his pen/sword): 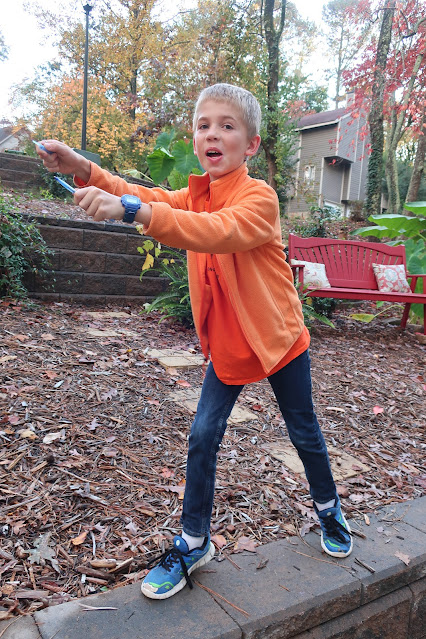 Rachel and Miriam sort of coordinated their costumes. Rachel decided she wanted to be Mary Shelley and then Miriam decided she'd be Jane Austen. Or perhaps it was the other way around. All they knew is that they both wanted Regency dresses. Technically they wanted me to help them sew Regency dresses but, friends, I...nope. First of all, I hardly know how to sew, second of all...I am working part-time and going to school full-time and have a baby-turning-toddler in the house. So sewing dresses was simply and impossibility.
But then I had some Regency dresses pop up in Amazon for 50% off retail price, making them only $15 each, and I was like, "We'd spend that much on material alone!!"
So we splurged and bought them each a Regency-style dress. I had to take in the sides of Miriam's dress a bit, and then I pinned it up so she could hem it for herself (she did a fine job), but all of that was much easier and less stressful than sewing the dresses from scratch. And Rachel's dress (same size) fit her just fine.
All I had to do for Rachel was make the heart of her dead husband so she could carry it around for the rest of her life, as every Mary Shelley is wont to do.
So here is Miriam as Jane Austen and Rachel as Mary Shelley (they didn't do much trick-or-treating, but they did help walk scared children to spooky doors and picked up a few full-size chocolate bars at the "good" houses): 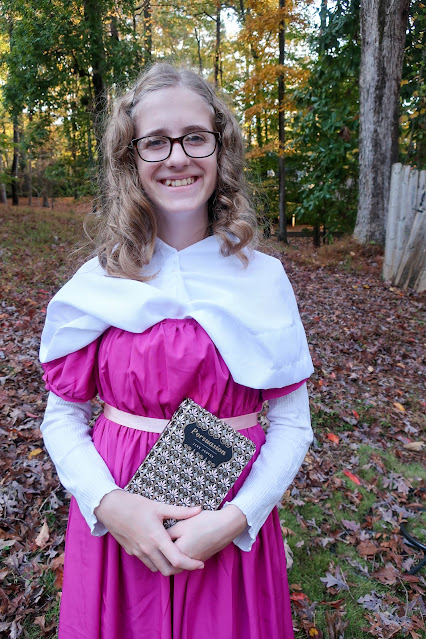 (Miriam holding my worst nightmare—Persuasion!! (Only my mom will get that joke, but let's just say I once spent an entire semester dissecting Persuasion and it was not my favourite experience.)) 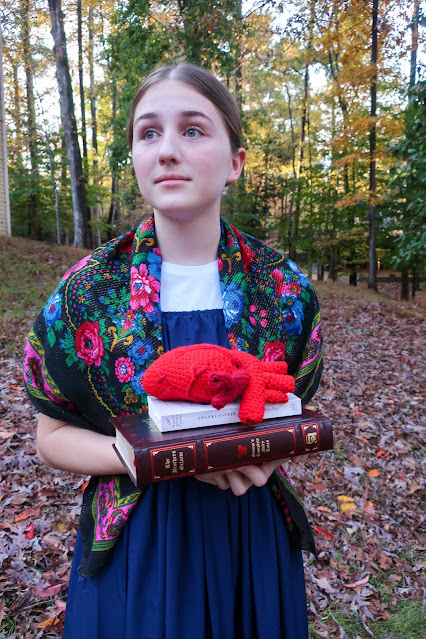 These girls. I'm so lucky to have them. And I'm so glad they're such good friends. They're already throwing around ideas for next year (repurposing the dresses to be The Sanderson Sisters was one idea). 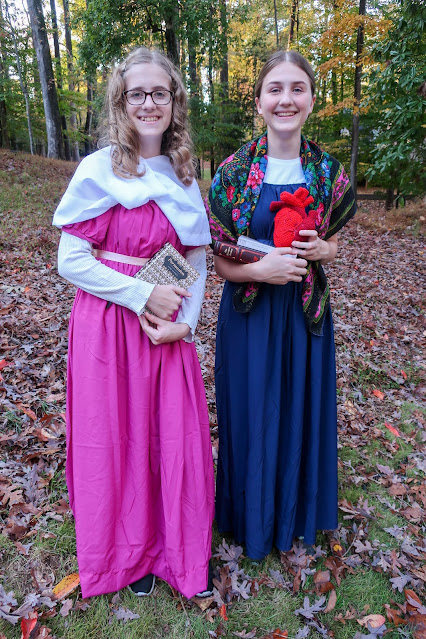 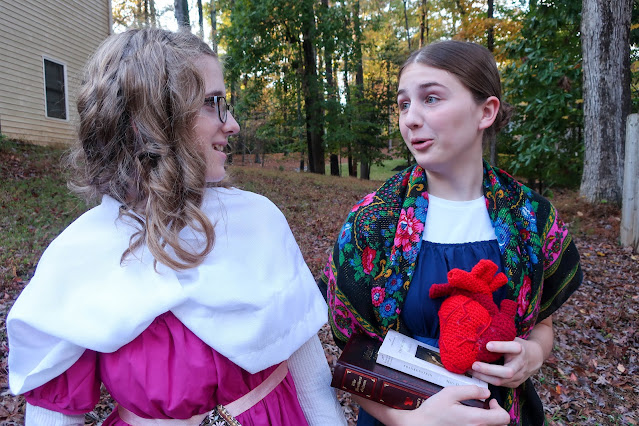 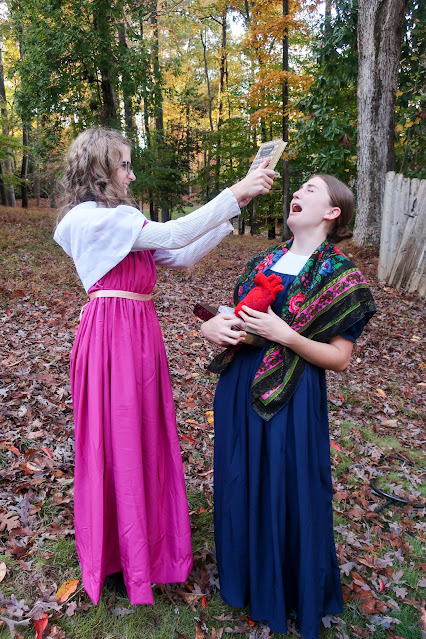 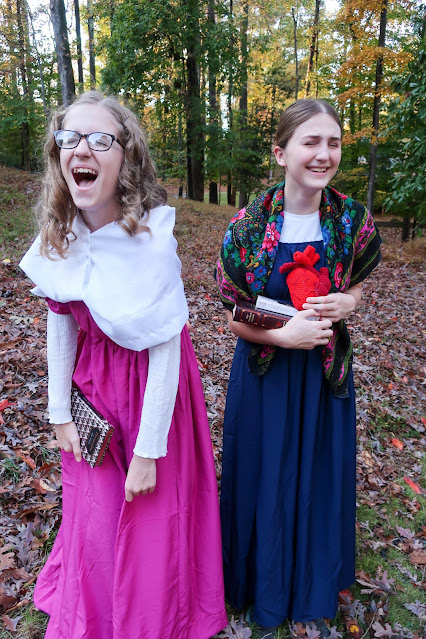 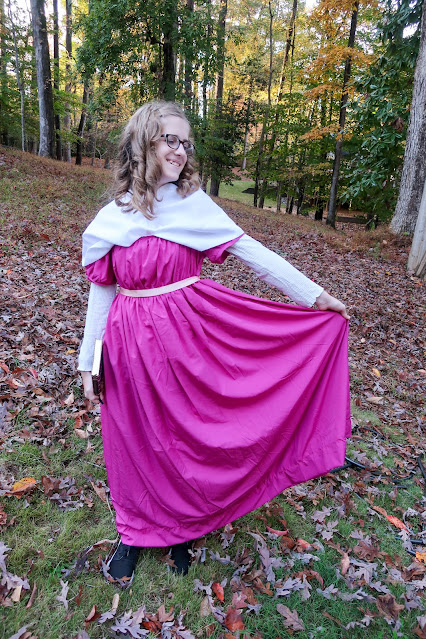 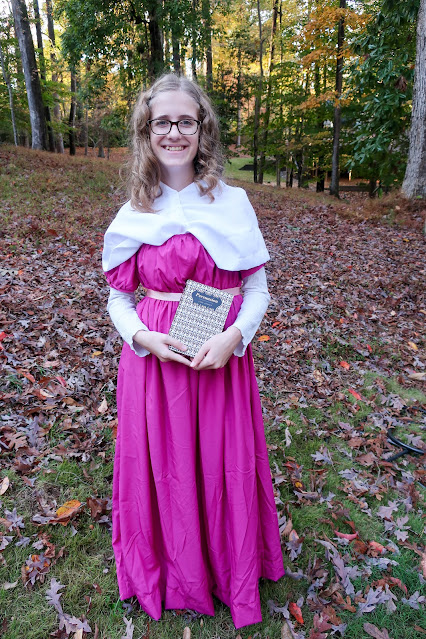 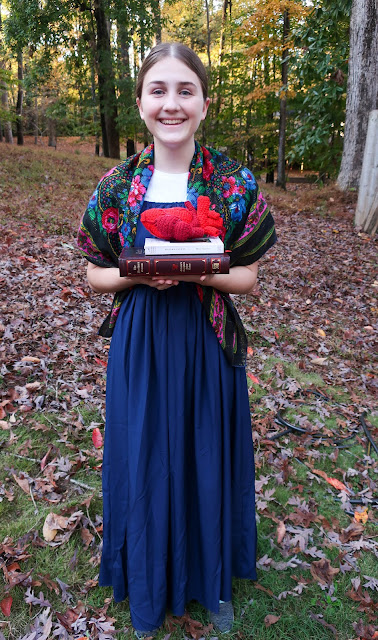 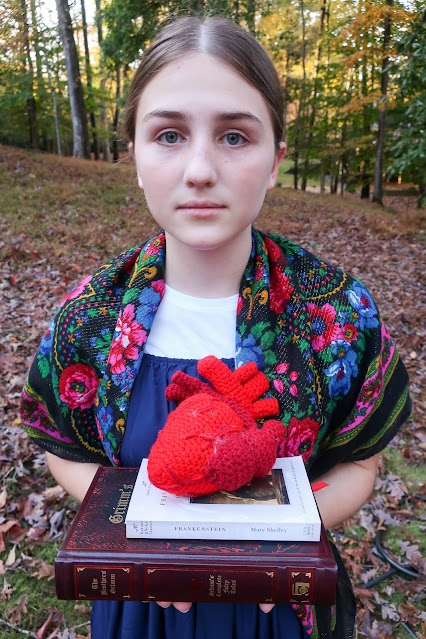 I need to do a few other Halloween posts—pumpkin carving, neighbourhood carnival, etc. But in the meantime you can check out some spooky stories written by Benjamin (hosted at the Georgia Writer's Museum website) and Miriam (hosted on her blog). We've been doing a lot of writing projects over here lately! 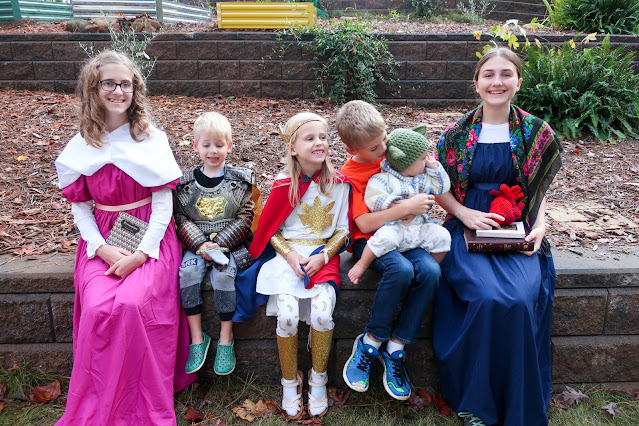