Autumn is in full swing, and I've gotta hand it to the south because it's really convinced me that autumn has merits. Growing up, I wasn't always so sure of this, in part because autumn was so short lived. For example, here is a picture I took of Alexander stopping to play in some leaves while he and I were on a walk together Sunday afternoon: 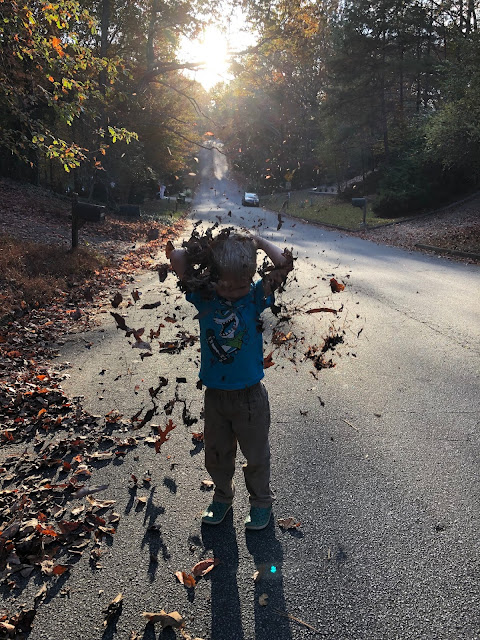 Notice the sunshine, the leaves both on and off the trees, his t-shirt.

Here is a picture from my brother's house (near Calgary) on Monday: 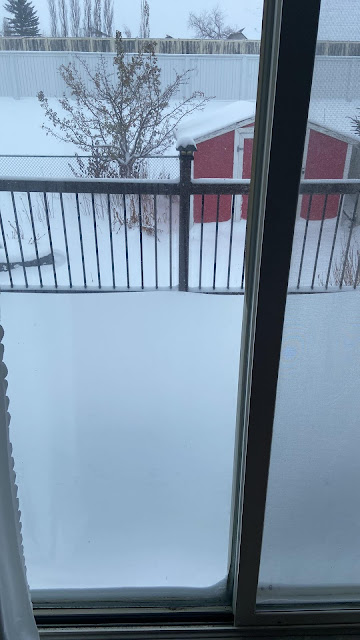 Cold. Grey. Snow.
Now, I recognize that snow can be wonderful. Honestly, living in the south has also given me newfound appreciation for snow. And there are people who just relish winter activities.
My cousin Heather (also in Alberta) recently posted about how much she loves Alberta weather because...you know...she likes snowshoeing and skiing and...it's not that I don't like those things (though I've never actually gone skiing before, aside from cross-country skiing, which is really pretty fun)...it's just that I don't like being cold. And I know there's "no bad weather, only bad clothing," and I typically agree with that statement and I have no qualms with wearing long johns and snow pants and layers and layers and layers. But also I just don't like to be cold. And sometimes it's just...cold...okay?
And that's fun for a while.
And I'm all about making the snowman and building the snow fort and sledding and having that snowball fight. I don't even mind shoveling.
But, like, only for a little while. And then I'm like, "Snow, snow, go away!"
And I would do anything to feel warmth coming from the sunshine.
So, you know, I really appreciate that fall is such a lengthy affair in the south. It's perfectly warm, but the bugs all think it's too cold to be alive, and the leaves are crunchy and colourful and it's just lovely.
Really, it's about perfect for me here, I guess, because autumn lasts for months and winter mere weeks, whereas other places I've lived autumn has lasted mere weeks and winter for months and months.
Anyway, here's a pretty picture of some trees in our neighbourhood: 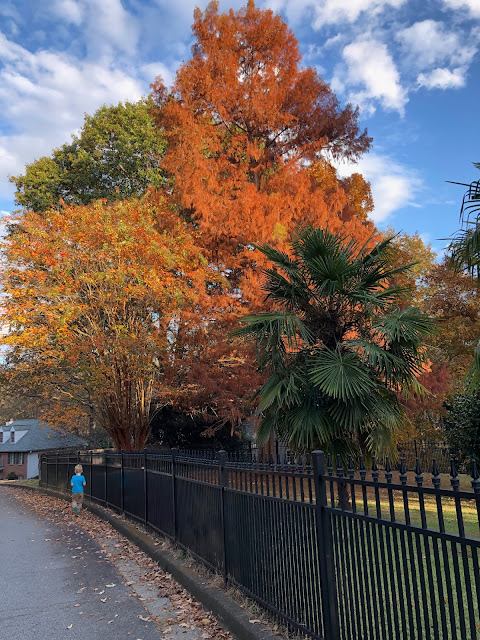 I will never get over the bald cypress.
I don't recall ever noticing any bald cypresses when we lived in North Carolina, but I certainly notice them here. The thing about cypress is that it's clearly a conifer. It's got the waxy, needle-like leaves, puts out cute little pinecones, does all the things a conifer might do. And then, come autumn, its needles turn a brilliant burnt orange and drop to the ground.
The first year we saw this tree go bald I thought it was done for! I hadn't ever considered that it would be a deciduous conifer. But, that's precisely what it is. The tree is perfectly healthy, just hibernating. 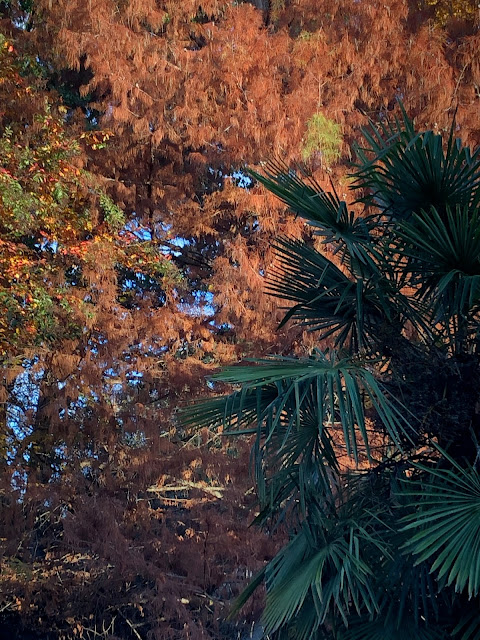 The pond at the park has a lot of bald cypresses around so our running path is absolutely littered with pine needs these days.

Oh, and here's a look at some baby bananas in our neighbour's garden: 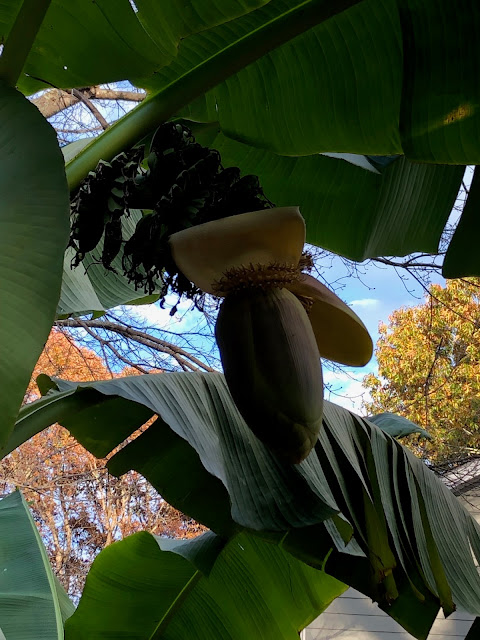 They probably won't last until they're ripe since we're due for a freeze before they'll be fully grown, which is a real shame. This poor tree tries so hard for fruit every year. We just don't quite have the right climate for it. If our trees ever get this large...I have half a mind to construct a little greenhouse around the bananas just to see if we can't keep them long enough to let them ripen.

Alexander and I sang a silly "baby banana" song all during our walk (to the tune of "baby beluga"). He loves doing things one-on-one with me, which is so sweet. Everyone else was at home playing Risk, which is why I took the two littlest ones out of the house.

We've started going for our PE runs, now that the weather is cool enough to not melt us while we're running. I honestly am not sure how people do track and field events during the summer here. It's so hot.

Running a half-marathon, I do not.

On Monday it was only about 80°F and the kids and I were seriously so sweaty when we finished our run. I think you can see some residual "heat" on Zoë's pink face in this picture: 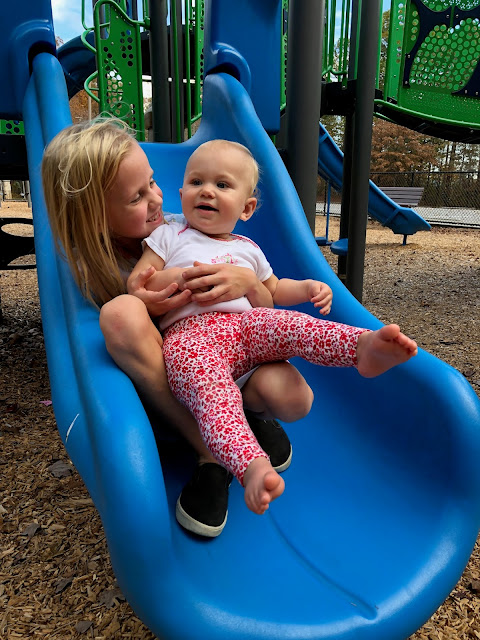 Or maybe this one is better: 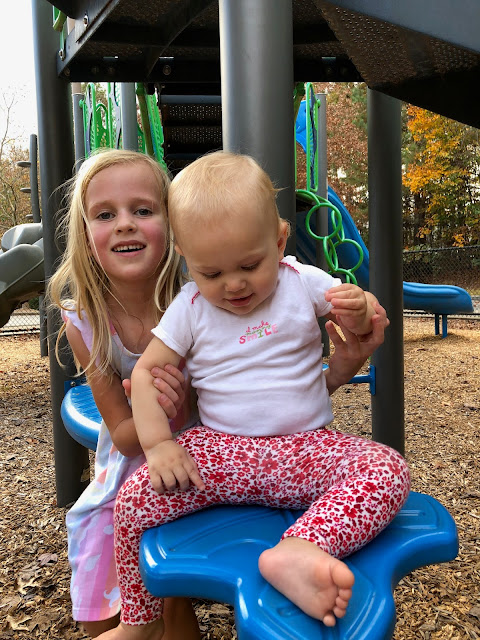 She was the first child to finish her four laps on Monday, little Miss Energizer Bunny.

Then Rachel finished. Then Benjamin. Then Miriam.

Then me, Alexander, and Phoebe all together.

The kids like to laugh at how slow I am, but I'm the one pushing the stroller...and keeping pace with Alexander, who cries if he gets left behind. I don't mind being slow. Moving is moving. 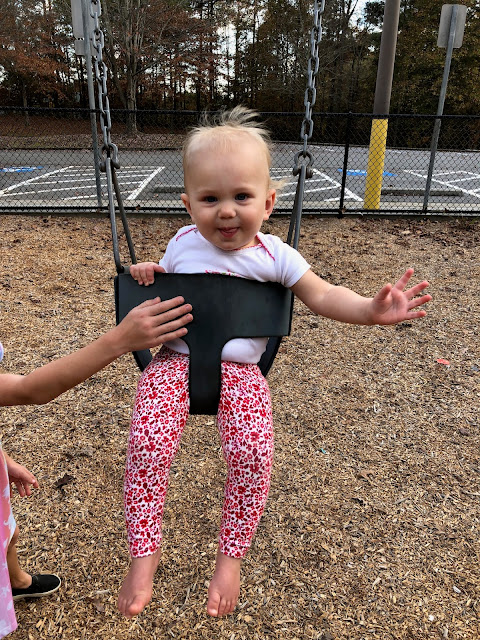 Part of the reason I think I feel like recording what we're doing for PE is because, now that I've taken five our kids for well-child checks, I know that one thing doctors worry about with homeschooled children is their level of physical activity. For whatever reason, I don't recall doctors really asking me such in depth questions about my children's level of physical activity when they were in public schools; they just kind of took public schooling at face value...public schooled kids have mandated physical education requirements...thus...they get enough exercise.
I'd wager my kids get more exercise being at home than they would if they were in school. But that's just me.
So, after a summer of swimming, we're back to running. And bike riding. And playing.
Here's Benjamin doing all sorts of climbing at the playground: 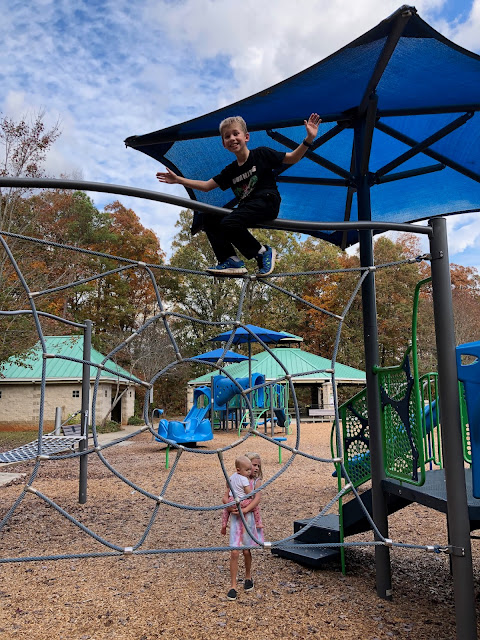 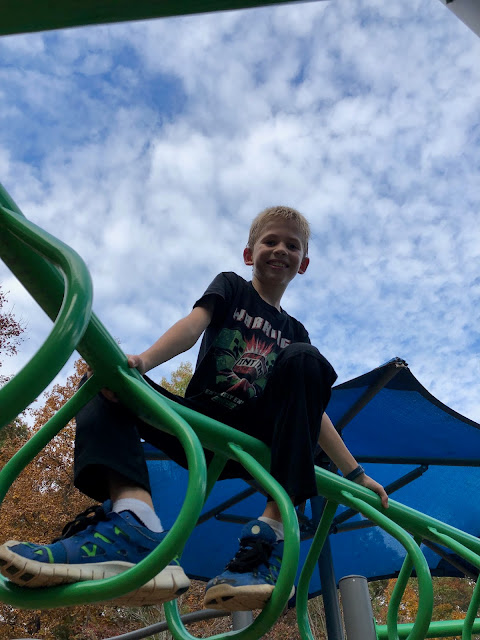 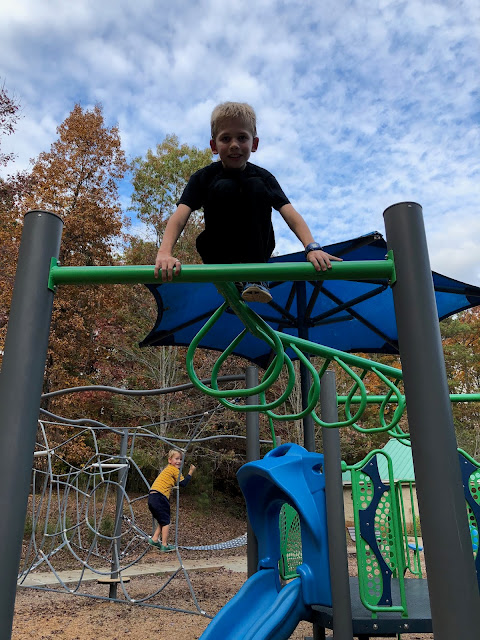 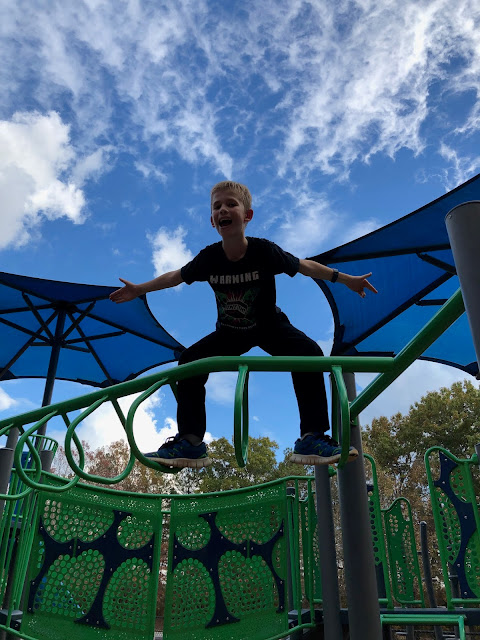 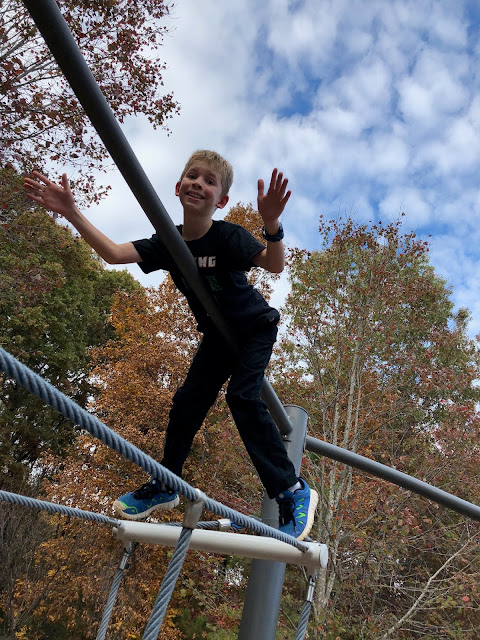 He's been bugging Andrew about getting some "bonding time" in.
"I have plenty of bonding time with The Mother," he explained at the dinner table. "I need some bonding time with The Father."
Andrew wasn't quite sure what sort of bonding activity Benjamin was looking for, but it turns out that Benjamin is pretty easy to please.
On Monday night we played kick-the-can for FHE (among other activities). We were just experimenting with "night games" because the girls would like to invite friends over to play such things. This is again partially at their doctors' behest because it's important that they have an active social life...another thing that doctors aren't concerned about when children are enrolled in public schools (at least as far as I can remember), even though my kids would tell you that they weren't allowed to talk or play at school, anyway, so it wasn't as if they got much socializing in there, anyway.
Whatever the case, we played kick-the-can as part of our family home evening.
The kids had an absolute blast.
So last night they begged Andrew to play with them. And he did. And evidently that totally qualifies as bonding time with Dad (because it does). Andrew is really good at kick-the-can. (He grew up playing night games like every weekend, so that makes sense; he takes strategizing very seriously and made it so much more fun than I made it).
We played kick-the-can again this evening! Some of our little neighbours even came out to join us—in the "cold," in the dark—and it was a whole lot of fun! So I'm hoping the girls' friends will...get a kick out of it (get it?!).
*****
Let's see...here are some pictures of sweet Phoebe at the playground: 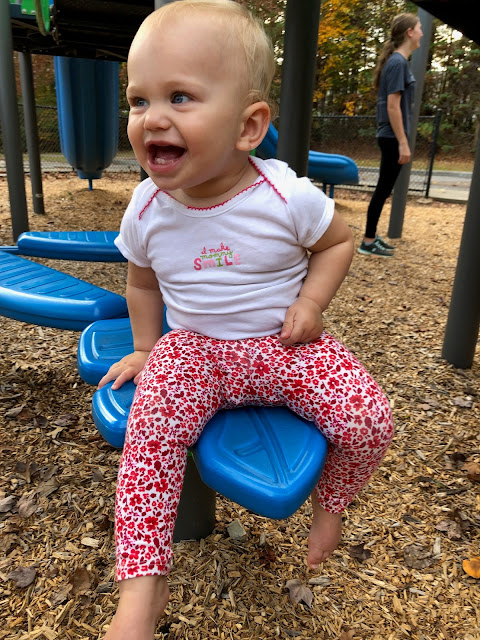 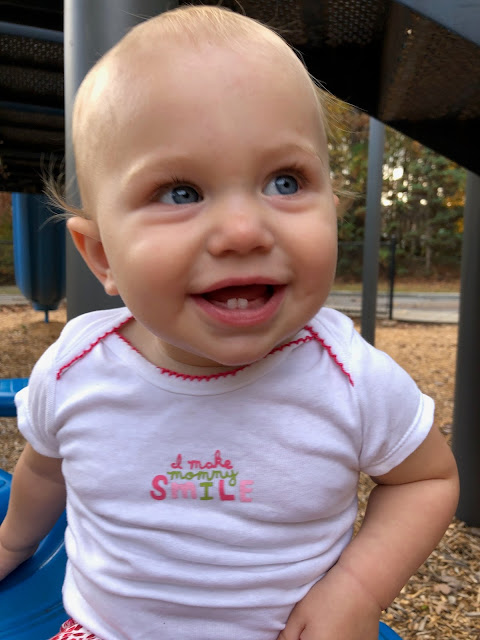 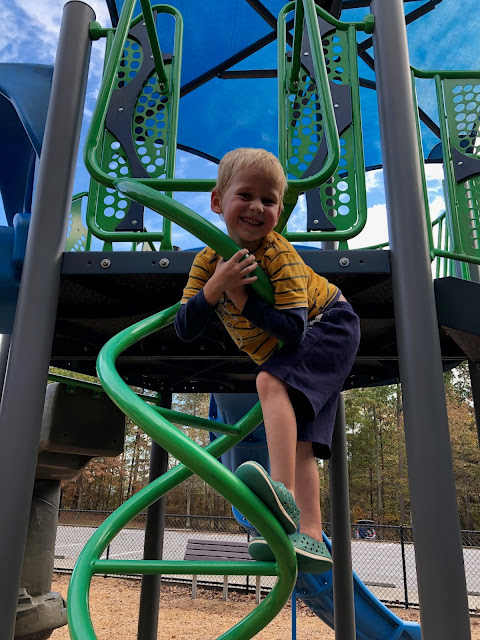 We did another run at the park today, and then stayed to play for a little while (though not too long because we had to meet Grandpa for "Grandma Doughnuts" this afternoon). Miracle of miracles—no one cried on this run. Most of my kids don't enjoy running all that much. I would say Zoë and Benjamin enjoy it quite a bit. Rachel doesn't hate it, but also doesn't love it. Miriam and Alexander low-key hate it. Sometimes they even high-key hate it.
But they're already finding that it's something that gets easier as you do it. At the very least they both agree that it's important to do in order to strengthen their muscular, skeletal, and vascular systems.
Here are the kids playing and/or studying after their run (with no faces red from the heat this time because it was a lovely 65°F, or so): 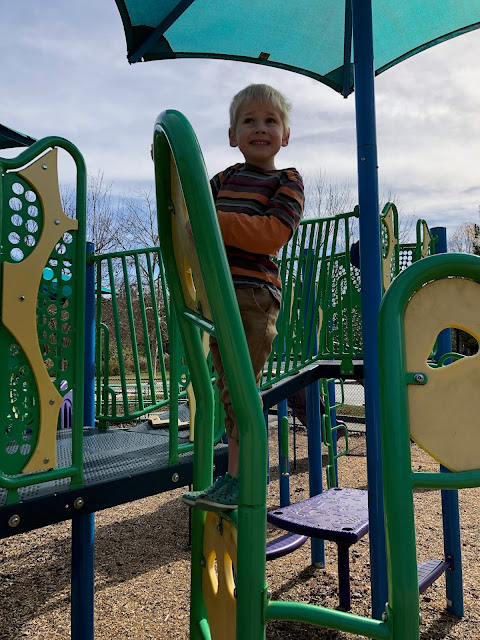 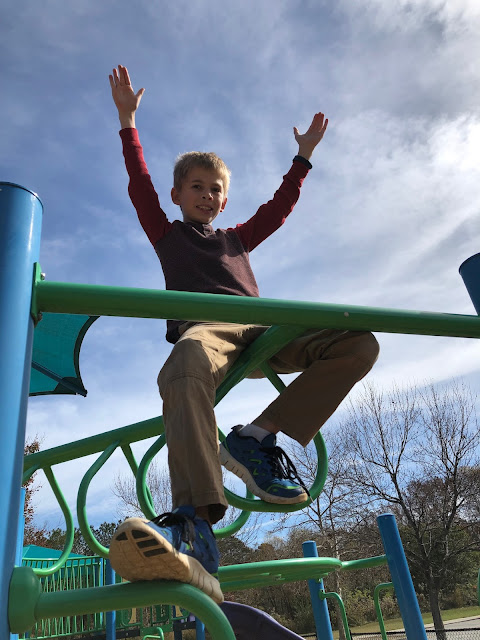 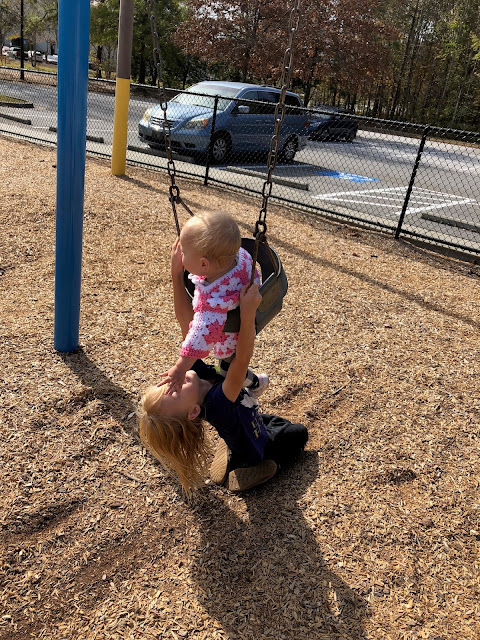 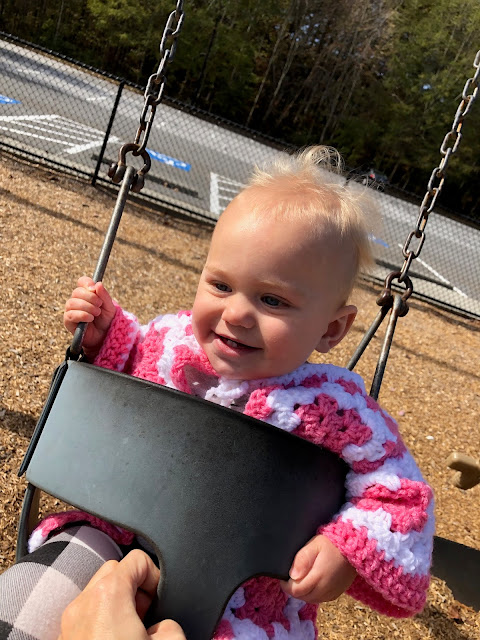 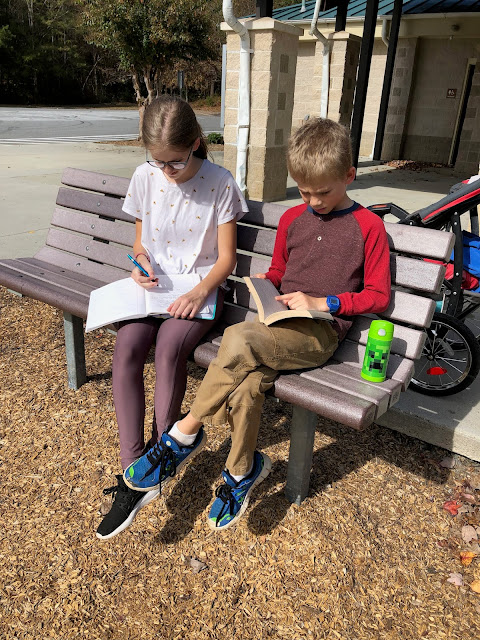 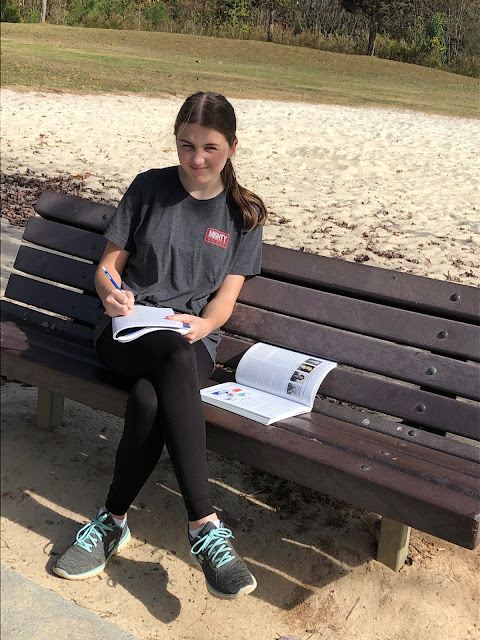 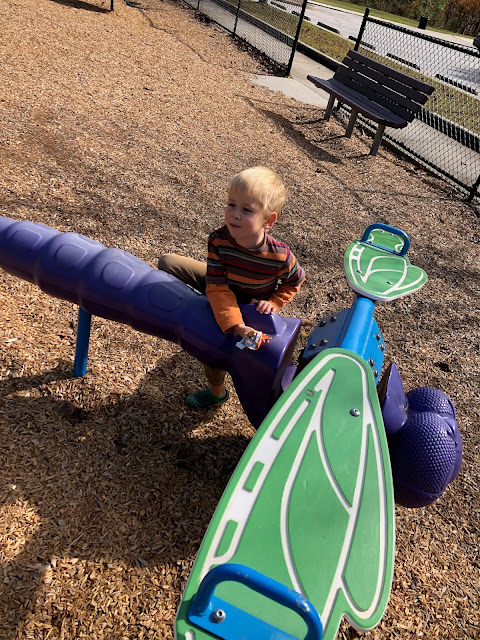 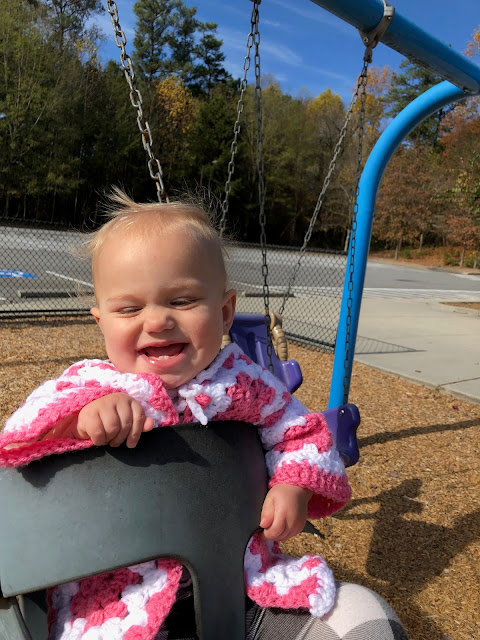 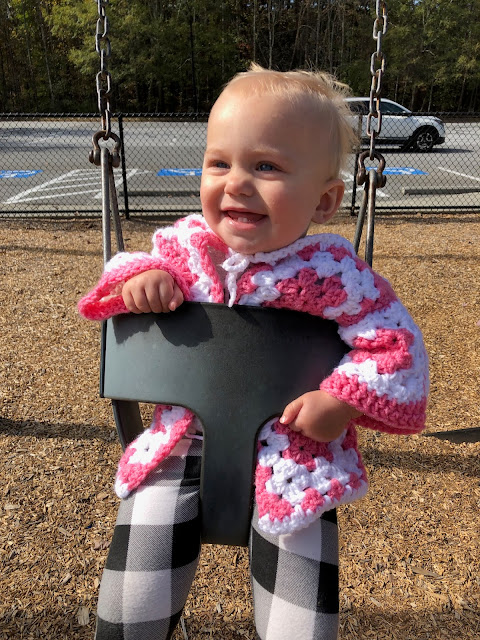 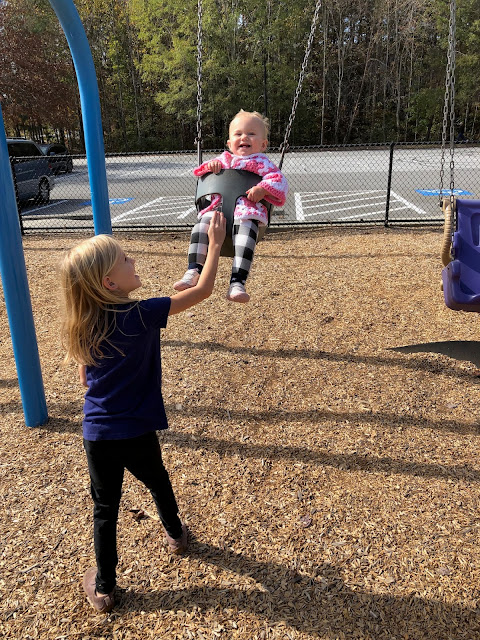 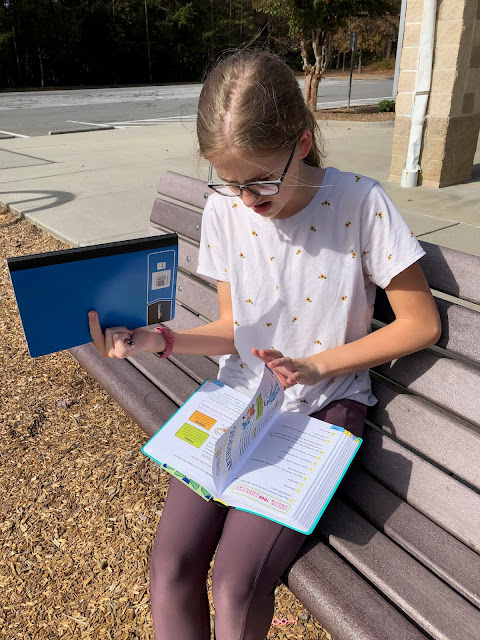