Phoebe has begun to take a few teetery-tottery steps recently, which is good news.

She's been rather reluctant about standing on her own and whenever we'd try to get her to walk holding our hands she'd just lift up her feet and swing from our fingers. She was not interested in walking one bit.

This is rather how she was with food. When she was five months old we could hold a spoonful of food right up to her lips and she showed zero interest in it, could not understand why we kept putting that horrible stuff in her mouth. 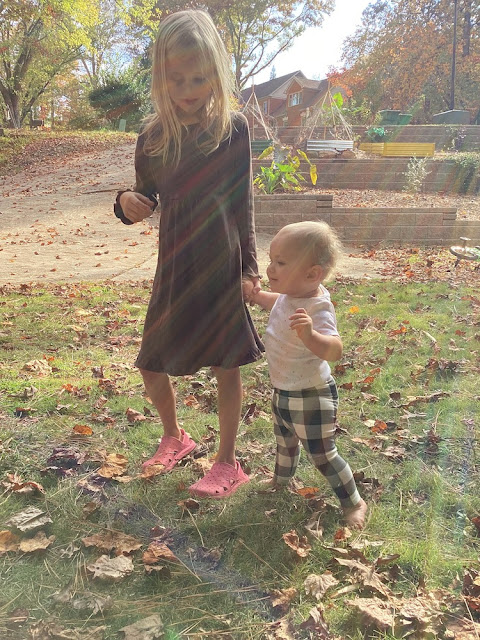 And then one day we finally got a little taste in her mouth and...well...the rest is history. Phoebe is now the most enthusiastic taster on the planet! She's always down for a snack. Discovering whether or not things are possible to eat is her number one hobby. Like, if she were a caveman baby, I know precisely what job she'd have. (Yes, do eat the smooth, green caterpillars! No, don't eat the fuzzy, brown ones!)

So naturally it hasn't been very long since she first tried standing and walking and now she thinks there really might be something to it and is getting pretty excited about practicing this whole bipedalism thing.

She took her first accidental steps (that I'm aware of) when I went to get her from her room after a nap a few days ago. She was standing at her door, crying her little heart out, and I opened it up a crack to coax her to come away from it so I could finish opening it so I could get her out. Instead of dropping to all fours and crawling to the opening in the door, she started "cruising" along using the door for support and then let go of the door and took a couple more steps before dropping to all fours and desperately crawling the rest of the way.

This evening Phoebe took about five steps toward me, and Andrew was disappointed that he'd missed it, so we tried to get her to do it again, but she kept only taking one or two bumbling steps. He joked about not believing us, so the big girls took Phoebe down to their room while I was reading stories to Alexander and Zoë and worked with her some more. Phoebe, for your information, is a storytime saboteur—she likes to scream while I read aloud, seemingly just to make everyone annoyed? We haven't really figured out this phenomenon. So I read very short stories to her individually and try to pawn her off on someone else while I read longer stories to her older siblings because...she just makes storytime very frustrating.

Anyway, they found out that she is highly motivated by the promise of a sip of water from a coveted water bottle and caught some evidence of her walking skills on camera:

Soon she'll be walking full-time, I'm sure!
She hasn't quite figured out how to stand up on her own yet, but she'll pull herself up on people or things and then can take a step or two away. Or, you know, she has plenty of helpers to help her onto her feet so she can get started.
(Miriam would like it to be known that at the end of this clip she does not, in fact, say, "Phoebe, that was sick!" (because she's not fifty), but was in the middle of saying "Phoebe, that was six steps!" when Rachel prematurely quit recording, just in case you're wondering about that part.)
Posted by Nancy at 12:11 AM