Over the past three weeks, Andrew has gone to two out-of-town conferences: one in Denver and one in Chicago. The week before he left for Chicago, he had his special little operation, so the house was already falling apart by the time he left (I really can only hold things together for so long without his help; we literally have our hands full of children...and then some). It was a long four days.

This week he left for Denver and before he even made it onto the plane, Phoebe had spiked a fever of 104°F. When Alexander fell off the bench while eating breakfast (or lunch?) and gave himself a ginormous goose egg, I knew we were in for a long couple of days.

But somehow three days seemed so much more doable than four. I don't know why.

Phoebe was sick and miserable and gave up sleeping entirely. On Thursday night she didn't really get settled until around 8:30 in the morning on Friday—after a long night with a lot of screaming, a lot of coughing, a lot of mucus, a lot of frustration, a lot of nursing, and a little bit of Tylenol—when she finally passed out in the middle of crawling across my bedroom floor. I quietly rejoiced and then went to ask the kids to just, like, very quietly play down in the basement or something because I needed to catch a few zzzz's. They agreed to play nicely and I finally crawled into bed around 8:45 in the morning.

Two of my children had well-child appointments at 9:30!!

I made a hasty announcement over Alexa, "Zoë, Miriam! Get dressed! We have to leave for the doctor right now!"

Phoebe woke up screaming. I threw on some clothes and ran downstairs, handing that poor, upset baby to Rachel. The plan had been for me to take Phoebe to the doctor because she had been so miserable the last time I left her with the kids (cried the whole time I was gone), but I couldn't take a sick baby to a well-child visit. Not in this economy pandemic. The doctor's office asks that you don't bring "extra" children, anyway, to cut down the number of people in the waiting room, etc. Bringing a sick "extra" child would be beyond the pale. Especially one too young to mask!

As I was explaining this to Rachel, Zoë, who was obediently pulling on her socks, asked, "Why do I have to go to the doctor again?"

"Again?" I muttered. "Oh, that's right! You already went. Who else hasn't had their well-child check yet? Miriam and who...? Benjamin."

He was no where in sight.

"BENJAMIN!" I hollered. "YOU NEED TO COME TO THE DOCTOR WITH ME, NOT ZOË! LET'S MOVE, MOVE, MOVE!"

He skidded around the corner of the upstairs hallway and thudded down the stairs somehow magically getting dressed in the process.

This is evidence that we can make it out the door in under an hour. If only we'd ever get ready that quickly. Well, perhaps not quite that quickly. But, you know. It would be nice to sometimes just say, "Let's go!" and then...go. It's just usually a circus getting everyone out the door. Takes forever!

Anyway, the doctor appointments went well. I need to write down their stats somewhere.

My kids are a bunch of nervous Nellies (I don't know where they got that from; perhaps I should just call them a bunch of nervous Nancys) and always have to have their blood pressure taken multiple times at the doctor's office. Miriam actually "passed" on her very first try. Benjamin had his taken sporadically throughout the visit—upon reception (high), when the nurse brought in the tray of vaccinations (high—duh!), and after the vaccinations on our way out the door.

"Nope, we're all good," I said, wanting to rush back home to relieve Rachel of Phoebe (or vise versa).

Besides, I can just look them up on the online portal when we get home. I'm not going to take the time to make my brain remember such numbers.

Anyway, the kids are doing well, still growing despite all being long, lean, eating machines.

We made it through the rest of our Friday and Phoebe again had the most difficult time sleeping. I think the main problem was that she was just so ridiculously mucousy that she was choking on it, and then she'd cough, then she'd do these massive vomits, and then want more milk because she was miserable. She and I woke up on Saturday morning in a musty mess of towels and fever-sweat and spit-up. It was not pleasant. My poor sheets have been washed several times over the course of the past couple of days.

Anyway, Phoebe and I have been incredibly tired. And the best way we found for her to sleep was with me holding her somewhat upright in the chair. So neither of us got very much sleep while Andrew was gone. 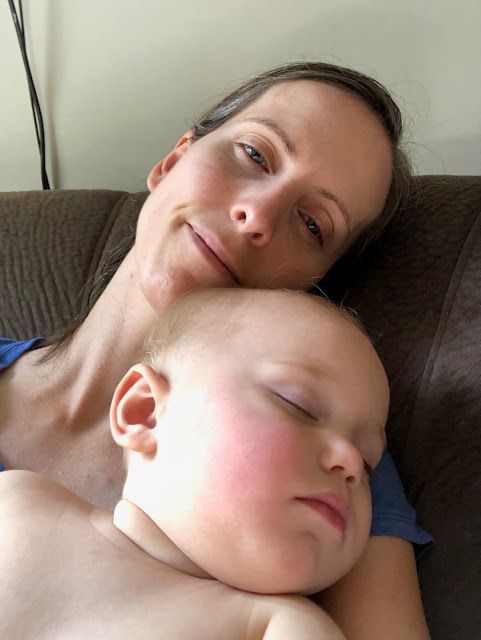 I couldn't help thinking about how long she's been sleeping on my chest—almost a whole year. Alexander and Zoë are counting down the days while I'm just wondering how we went from this: 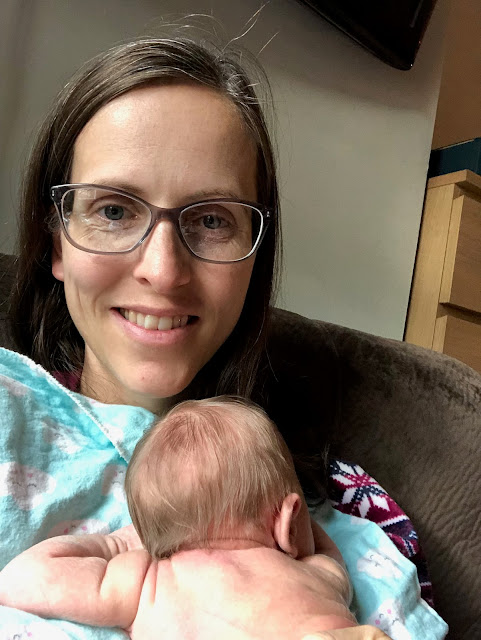 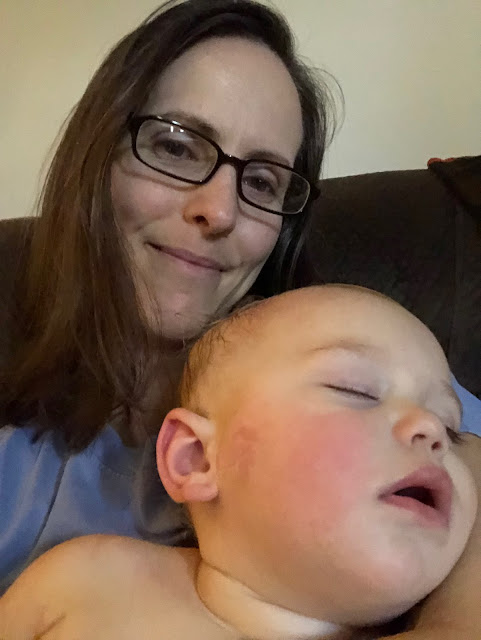 I'm going to miss the newborn stage so, so much. I do miss it so much. Snuggling newborns is my favourite thing in the world. And I'll never get to do it ever again (for real this time). 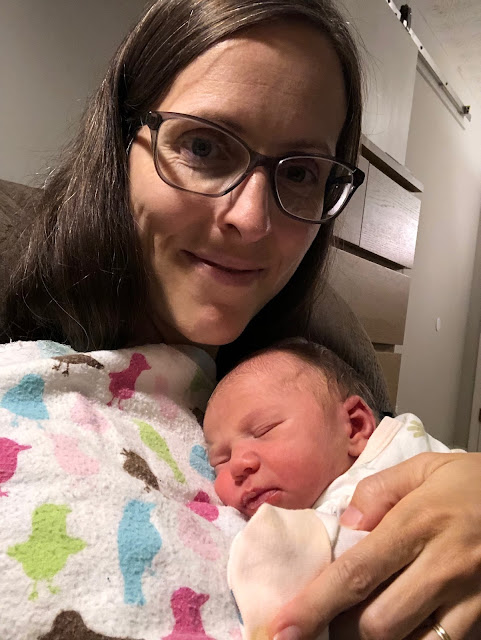 But it's fun to watch them grow, too. I'm still in awe of how fast kids learn things, how quickly they go from not being able to do anything to figuring out how to do things that even I can't do. (Not that I've done very much compared to how much there is to know and do and experience in the world.)
Today Phoebe was exhausted. The switch off of daylight savings didn't help. After sleeping the best sleep she's had in days (which isn't saying much, honestly), Phoebe insisted on getting up at 7:00 this morning. By 11:30 she had had it with the day. So I nursed her and we took a little nap together; she woke up after about 45 minutes and fussed for more milk and then promptly fell back asleep and was dead to the world for hours. I think it was the deepest she's ever slept. I even tried waking her because (1) she doesn't usually sleep for longer than an hour and (2) I'd promised my kids I'd take them to the park, which meant she couldn't sleep the entire afternoon! Also, (3) I rather wanted her to sleep tonight as well. Every time I woke her up, though, she just looked around and was like, "No, thanks," and would crash again. 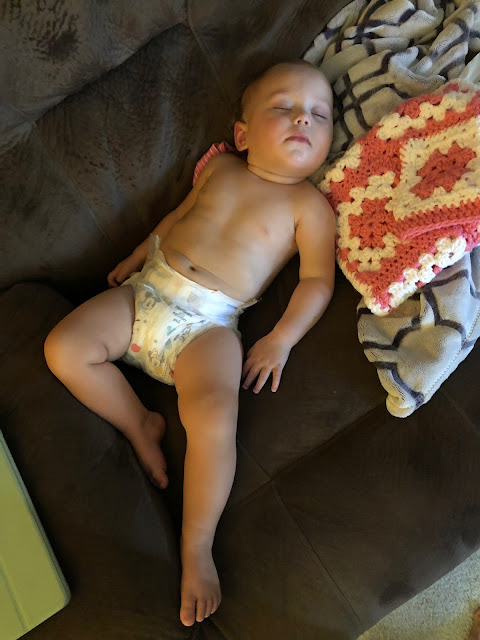 She finally woke up on her own around 2:30! Longest nap her life (probably)!
She was feeling much perkier after her nap and enjoyed her vantage from the jogging stroller while we went for our mile run (which made several children miserable, but not Phoebe), and then enjoyed watching the kids play at the otherwise empty playground.
I'm happy she's feeling better and I'm almost happy she got sick because it's made her regular nighttime shenanigans feel like a completely doable sleep schedule (whereas before it felt a little bit horrible (it is a little bit horrible)).
Anyway, she's sleeping well now, though she's already been up once or twice needing help to re-settle.
My very last story is one about Benjamin....and Alexander...which I didn't work in here as smoothly as I'd hoped but, in all honesty, my brain is somewhat fried from having basically staying awake from Thursday to Saturday.
Yesterday we started working on some Christmas music during our primary singing time, which the kids were very excited about. We were singing the arrangement of Away in a Manger from the Primary Children's Songbook, which has the "asleeeeeeeeep, asleep" chorus. Benjamin excitedly announced that he'd take the bottom line, since he's getting older and more mature. Zoë was more than happy to take the high part. So we worked on both the high part and low part together and then came the moment of truth—putting the parts together.
They're supposed to go together something like:
Asleeeeeeeeeeeeeeep
------------------Asleeeep
with the lower part entering in the middle of the top part's eeeeeeep, almost like an echo, with both parts finishing their eeeeeep together.
Poor Benjamin, though, kept entering with a powerful plosive...
So Zoë would be singing, "Asleeeeeeeee..."

And Benjamin would burst in with, "Pasleeep!"
"Asleeeeeeeee..."
"Pasleeep!"
Oh, man! It took us a hilariously long time to train him to drop that initial P! There was no need for him to finish the first "asleep" since it finishes at the same time as his "asleep!"
Zoë still thought this was funny at dinner, so she brought it up (in front of Grandpa!) and even wrote on the whiteboard in big capital letters, "PASLEEP! PA, SLEEP!" because she thought it was just so funny that it sounded like he was telling Pa to sleep!
Benjamin was unamused, jumped up and erased the whiteboard and, I mean, no one likes to be teased so that's understandable. But, in this house we do a little bit of ribbing every now and again. Like every few hours or so. It's fine. Helps us develop tough skins...maybe...?
Anyway, we calmed Benjamin down from his outrage, told Zoë that it was, perhaps, a little too soon to tease him about such things and carried on with our meal.
At some point, Alexander quietly stood up and made his way over to the whiteboard where he started writing out, "PASLEEP, PASLEEP!"
Benjamin started getting all riled up again, but we managed to help him tame his anger while we all observed what a good job Alexander was doing writing on the board the way he was! 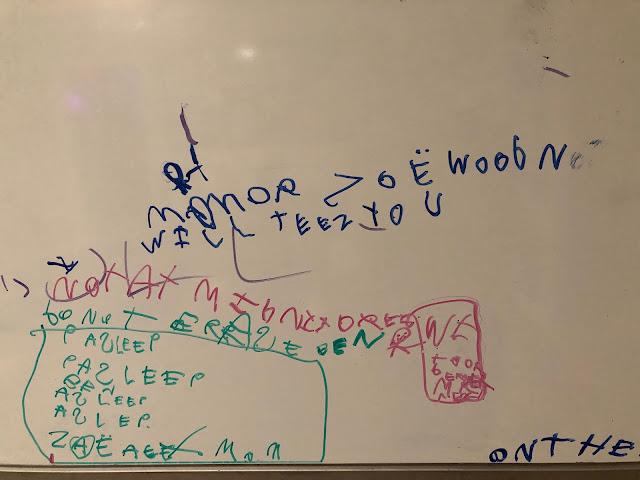 Then he drew a box around that and wrote "do not erase ben," which was really cute because he wrote "do not err..." and then paused for a few seconds before writing an A over that second R and correctly spelling "erase." Not bad for pre-k!
Then Benjamin said he was going to sneak out of bed at midnight to erase it, so Alexander wrote, "not at midnight or ever" (and whatever that stuff in the box says)

Then I think part of the blue line above that got erased because he wrote, "or else I will teeze you," which wasn't really much of a threat since, well, he was already teasing Benjamin.

And then Benjamin said, "What if someone else erases the board, like Mom or Zoë?"

To which Alexander responded, "Mom or Zoë wood never."

They had a whole battle like this, with Benjamin sputtering out his defenses and Alexander responding letter by letter on the board.
I think this will be really funny down the road, but we'll try to lay off the "pasleeps" for at least a little while since Benjamin really is making a valiant effort to improve his singing.

Phoebe, on the other hand, is more than welcome to do as much pasleeping as she wants!
Posted by Nancy at 11:43 PM