What is with the mascots?

Approximately 20 days ago, we went to The Mayan to celebrate Matthew's birthday. And, of course, everyone forgot their cameras. I hereby vow to take interesting pictures of things and put them on my blog. Honestly, it's not like it costs me anything to do it. I have a camera, I have a computer, I should just do it...

Lucky for us, this strange bird called Toucie graced the birthday boy with a complimentary picture of said bird posing with Matthew. Toucie is supposedly a toucan and his or her name should then be said "Too-key" to sound like toucan, however, when I read "Toucie" I want to pronounce it as "two-sea" or even better, "two-chia."

So, here's the picture, finally, now that Matthew is almost 8 years and a month old... I'm not sure what the grimace is on Matthew's face, but I know that I probably would have been afraid of that bird if it put its arm around me and forced me to smile for a picture when I was only eight years old.

"Toucie" was speaking in an awfully high voice and kept using his/her left arm to hold the top part of his/her beak up so that s/he didn't walk into things and could actually look at the people s/he was talking to. It was a pretty scary mascot, but really, as far as mascots go, it wasn't too bad.

It was fairly new and didn't smell funny...the person inside didn't try to force balloons into childrens' hands and try make their parents pay for them. No, this was a fairly good mascot. But do you know where mascots go when they die?

Jordan. They go to Jordan and they look nappy and smell funny and force balloons into childrens' hands and try to force their parents to pay for them. 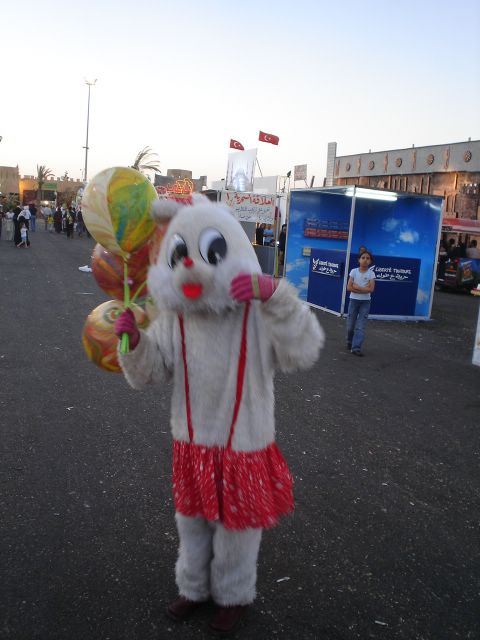 See, Matthew, there was nothing to worry about. You could have snuggled up to that mascot without a care in the world. Had you been a little Jordanian child, you would have gotten this left-over thing. Now that's scary!
Posted by Nancy at 9:24 PM