We ventured out to the Ataba metro station today to look for some books that might be applicable to Andrew’s research. One of his professors had told him that there was a book store there called Ezbekiyya; little did we know, we’d walk up the stairs from the metro and immediately stumble into a  whole book suq, disheveled enough to be considered a librarian’s worst nightmare (or paradise, considering how many treasures must be hidden there).

Magazines from 1987 alongside magazines from 2009. Psychology books with general fiction. French, English, Swedish, whatever… 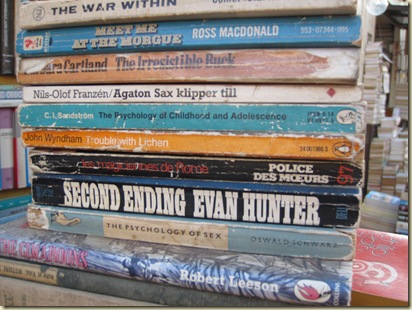 An alleyway lined with book vendors and piled high with stacks of books and magazines filled our eyes. The sight was overwhelming. Old books, new books, big books, small books, Arabic books, Russian books, Russian-Arabic books, every kind of book. The only order I could sense was that books were stacked by size; occasionally vendors seemed to make attempts at organizing by subject or language but with the number of books crammed into their tiny storefronts it had obviously proven an impossible task. 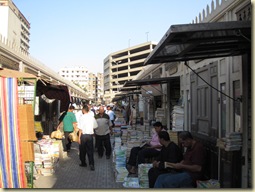 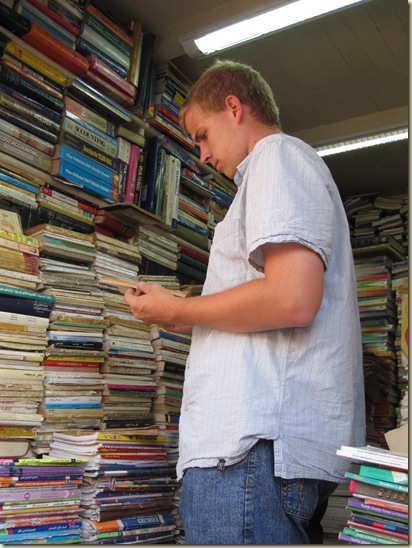 Andrew stopped at one place and asked if they had any old books about Italians in Egypt. Maybe books about life in Egypt written by Italians or something to that effect. He was handed a mathematics textbook from 1910. And then a book on ancient Egypt. And then two world history textbooks in Arabic.

The vendor kept leaving us at his booth and then would come back several minutes later with new books for us to look at. Nothing was right. How they could even find anything remotely applicable to what Andrew wanted was beyond me; desperate to make a sale they kept trying to no avail.

Rachel was pleased to have her own little perch while we waited. 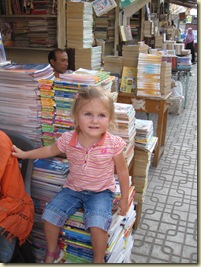 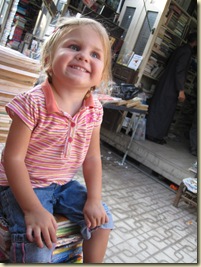 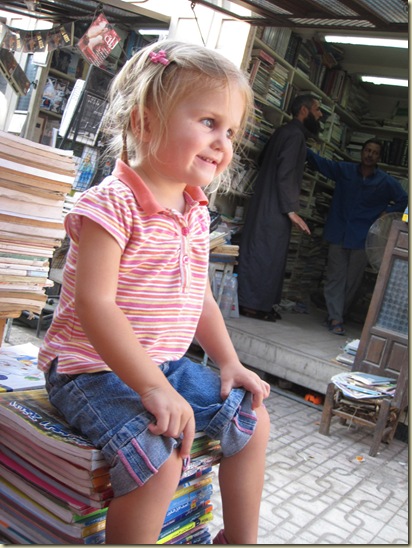 We decided to call it  day and come back when we knew more what we were looking for; Andrew was just hoping a gem of a volume would drop into his lap, as his professor described happened to her a few times. But it didn’t.

We couldn’t exactly call it a day, either, because word had circulated down the alley of book vendors like wildfire and the situation was now completely out of our hands. I think every single vendor had something to show us while we worked our way down the alley.

“You want Italian? I have Italian!”

“I have history books here, sir! Welcome! Have a look!”

“Perhaps an Italian copy of the History of Egypt?”

Nothing was proving fruitful, but we did stop and buy a few children’s books for Rachel. Beauty and the Beast in Arabic; Cinderella, Pinocchio, and a book of princess tales in English. She wanted to read them when we got home but we told her she had to earn them by staying dry at night. We’ll see how that goes. 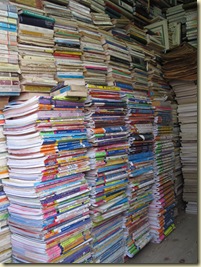 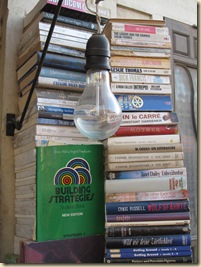 The book alley spat us out into the regular hustle and bustle of downtown Cairo. It only took us a minute to recognize where we were—just a short walk to the Khan. 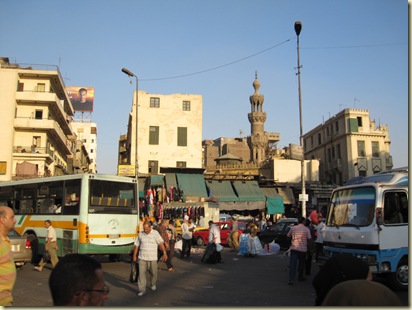 People always ask us what the closest metro stop to the Khan is, and we’ve never been able to give a straight answer. Ataba, though, is really rather close. It’s a bit of a crazy walk—jam packed with vendors and shoppers alike—but isn’t too long of a walk. 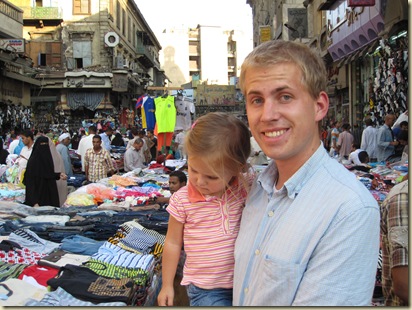 We decided to walk to the Khan to see if we could find a fanous. We’ve been searching for one the whole month of Ramadan and just haven’t gotten around to purchasing one. Many of our searches have turned up absolutely nothing as an astonishing number of people don’t seem to have any idea where to buy a fanous. You’d think, since they’re so traditional and widespread in Egypt that everyone would know where to find them—just how Americans know where to buy Christmas trees—but that didn’t seem to be the case and we were sent on several wild goose hunts.

So we walked from Ataba deep into the Khan, wading through garbage sometimes ankle-deep, and seeing, naturally, many interesting things along the way. The number of interesting things you see at eye-level is inversely related to the amount of time you spend staring at the ground to make sure you don’t step in something unforgivably repulsive. 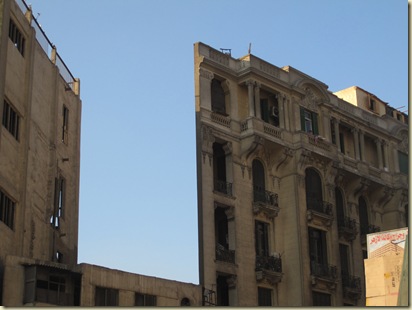 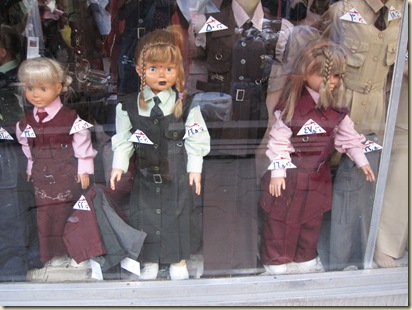 After walking up and down almost every street in the Khan, we were eventually directed back past Bab Zuweila to a road we had perused once before to no avail. We went anyway and found that a store selling fawanees was open. They didn’t have very many left and we ended up buying a broken one (for 15 LE), but at least we have one now! I can’t believe how long it took us to find one! 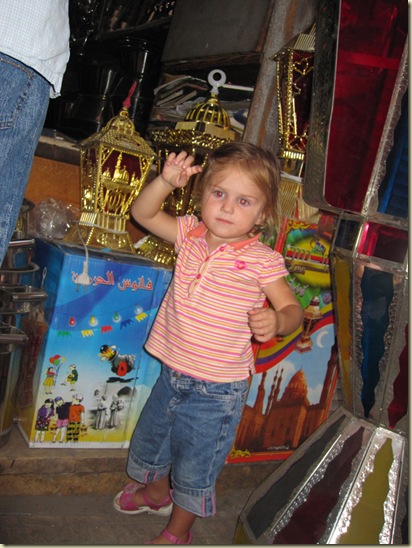 It’s a cute, little metal one with painted glass, made in Egypt. The base is falling off and needs to be resoldered, but it will do. We just didn’t want to have to settle for one of the lame plastic ones from China.

Things had really quieted down with the start of iftar; shops were closing and people were settling into their meals, which were set up, seemingly impromptu, in the streets. 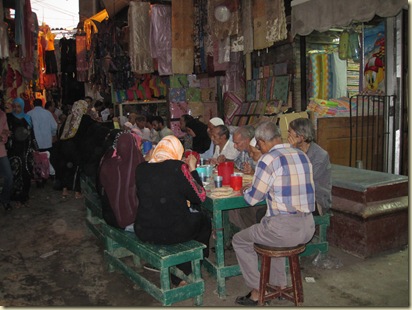 We debated for a minute about whether to walk all the way back to Ataba or whether we should just catch a taxi home. We had been wandering around for almost four hours; I told Andrew that I wasn’t sure I could make it back to Ataba. We caught a cab near Al-Azhar, fanous and fairy tales (our treasures for the day) in hand.

It surprises me that we’ve lived here for over a year and there are still so many unexplored places. Cairo is big.