Deep down inside we were a little worried about getting all the way from Nazareth to Cairo in one day. Most of our concerns revolved around catching our 4:30 bus from Taba to Cairo, so we phoned a few cheap hotels in Eilat just to make sure there were rooms open for us as a backup. 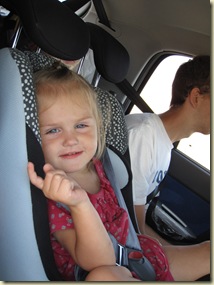 We left Nazareth bright and early. Because Rachel was still sick and grumpy I sat in the backseat and Joseph navigated. We still got lost and confused a few times, which made me feel much more comfortable with my navigating skills. We missed the road we were supposed to take so took a little windy side road marked “scenic.” It followed along the West Bank fence (the wall hasn’t made it that far north yet) for most of the way. It was definitely scenic, though. The mountains were covered in trees—pine trees, even. It’s been a while since I’ve seen any of those.

Our first stop was Qumran, which is where the Dead Sea Scrolls were found. We watched a multimedia presentation about life in the Qumran area when the scrolls were written; it was a very religious community. They suggested that John the Baptist may have lived there for some time.

We didn’t stay very long because it was hot and we were pressed for time, but we enjoyed what we saw. 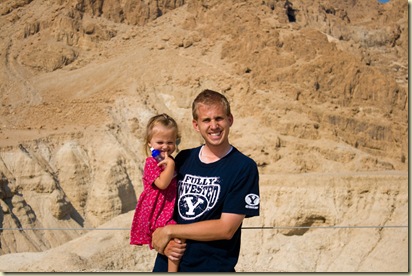 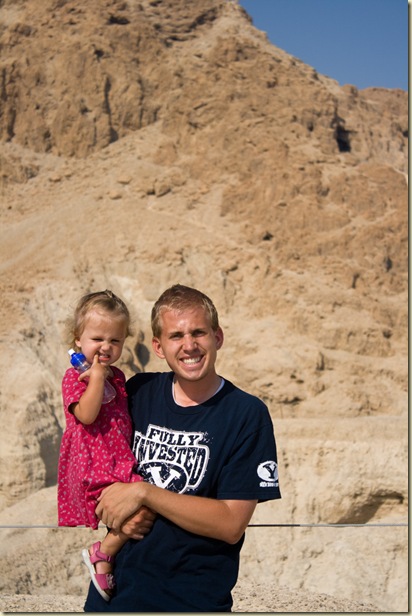 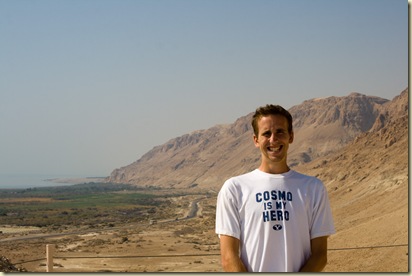 You can see the Dead Sea from the hills of Qumran, and that’s exactly where we were headed next. We stopped near Ein Gedi to use a free public beach. The changing rooms and restrooms were on a pay-per-use basis and we were running low on shekels so we took turns changing as discretely as possible in the car.

Later we were shown that discretion is overrated when you can just rip off your clothes and change right on the beach. Silly us. We didn’t realize flashing was so welcome in Israel. Yikes!

The beach wasn’t anything compared to the one we went to in Jordan, although this one was at least free and lifeguarded. Andrew got yelled at by the lifeguard for going too far out with Rachel, even though he was still standing on the bottom still. It’s not like if he dropped her she would sink, right? I mean, we’re in the Dea Sea. 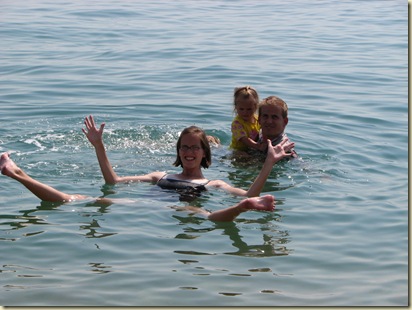 We still had fun, though the beach was small and rocky and the weather was hot, hot, hot. 45 degrees hot. 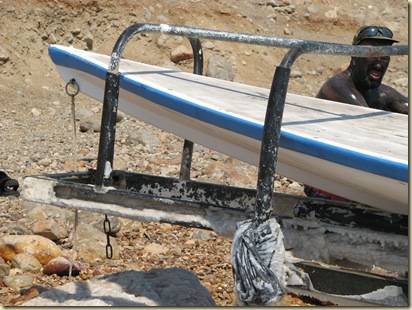 Someone brought their dog to the beach and he bounded straight in like he had been waiting to jump in the water all day. After swimming a few yards out he turned around and hightailed it back to shore and didn’t get back in; I’m not sure he was expecting all that salt. Rachel wasn’t either. She also preferred to stay close to shore. 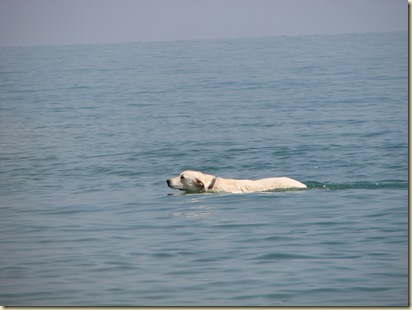 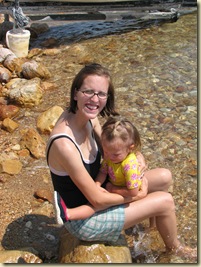 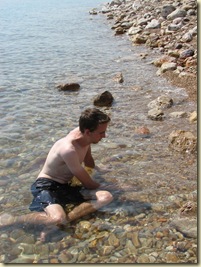 We did get a little floating in before rinsing off and hitting the road again. Patrick described the water a “oily” and Rachel described it as “too salty” and “a little bit scary.” Mostly, it’s just a cool feeling to float so effortlessly, I think. 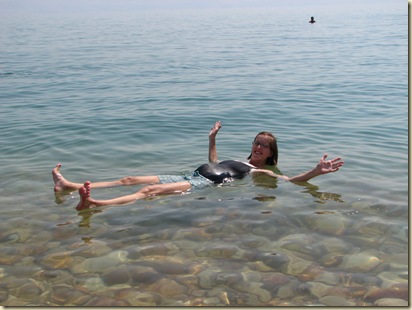 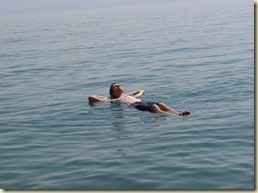 Our last stop before Eilat was Masada, a fortress on top of a plateau. We only used the facilities at the visitor’s center, though because it was too expensive for us to rationalize a quick trip through; we were still hoping to make it across the border in time to catch our bus. 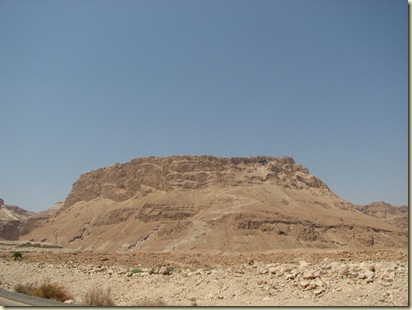 There was a big model of the citadel in the middle of the visitor’s center that we walked around. There were stairs leading down so you could walk next to it but all the little doorways were barricaded with clothes racks and things. We pushed them aside and went down, anyway, which is when we happened upon this happy little mannequin: 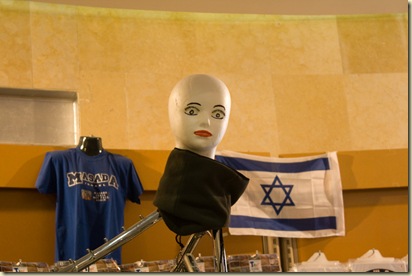 The last stretch of the Negev desert was fairly boring to drive through. To keep ourselves entertained we looked for wild camels, or at least camels wandering around in the desert without people around—I’m not really sure if they were wild or not; funny road signs; and interesting Israeli art—they seriously stick random statues and things in the middle of the desert, which is kind of nice. 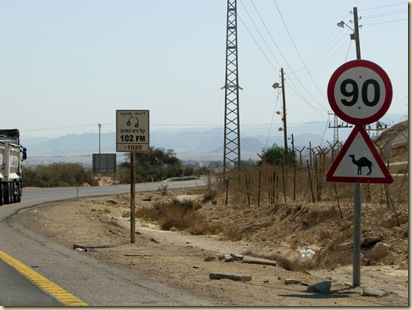 Although I tried, I was never able to take a picture of my favorite warning sign, kind of like this one. It warned travelers that the area was “firing zone” and there was to be no stopping or trespassing. Brian Regan’s voice started echoing in my mind. “Uh, shouldn’t that read: Road Closed?”

We made it to Eilat, turned in our rental car (we used Budget because they didn’t have any minimum rental time), and made it through the Israeli side of the border in record time. Israel apparently doesn’t care about Qur’ans or passport stamps on the way out of the country, so we breezed through.

Getting into Egypt, however, was a little tricky since Andrew and I were still avoiding getting stamps in our passports. Egypt has this way of acting like no one has ever tried to enter their country before and border crossings are always a little confusing.

This time the head guy was sure that we had to get a stamp in our passport, otherwise they’d have no record of us ever coming through the port. We told him that was kind of the idea…we needed to not have a record in our passport about coming into the Taba port. He ended up pulling Andrew into his office for 45 minutes where Andrew debated with him about the legality of it all. Considering there is an official form for it, it’s pretty much legal.

Luckily, the head guy’s peons were all on Andrew’s side and we remembered that Egypt is off of daylight savings (for the time being, anyway, since it’s Ramadan) which meant that we had an extra hour to waste getting across the border. A very good thing, considering we made it to the bus stop only 20 minutes before the bus left. 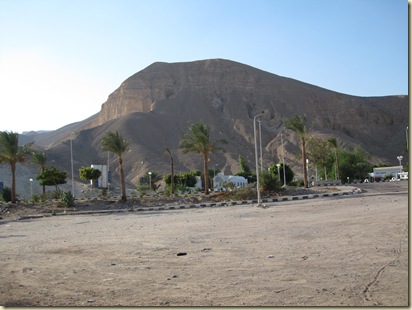 It was also lucky for us that Rachel’s fever had broken and she was perfectly healthy when we crossed the border. Egypt has you fill out these silly cards at the border asking if you have any flu symptoms; I don’t know what would have happened if Rachel had still had a fever, although they did have a quarantine desk set up in a corner.

Would she have had to sit there until she got better? That doesn’t sound helpful.

Anyway, we caught the bus, which was so wonderful because after traveling around for so long I was ready to go home. My temper was short and I was beginning to need some personal space (beginning…hahaha…personal space was well overdue and I was getting snappy). We made it home by 11:30 PM. We left Nazareth at 6:30 AM. Not bad considering all the stops we had to make, and the bus ride, though crowded, wasn’t as bad as I thought it would be.

As soon as iftar started people got up and started passing around dates and drinks and fruit and things, and then they all settled down to eat. Rachel slept most of the way; she was still recuperating, I guess, since she usually isn’t a good sleeper.

Now I just have to write about what we did with Patrick for his last few days in Cairo…and then I won’t be writing about touristy things for a while because I don’t plan on doing anything touristy for at least several weeks after the baby is born!