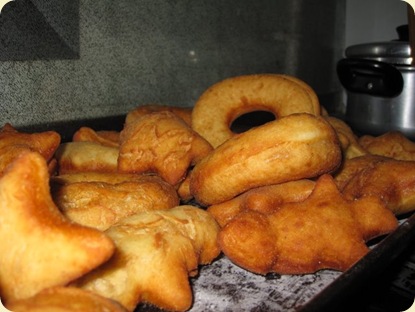 Yesterday while I was napping, Andrew had this Brilliant Idea to make donuts…something like so that we could tell his mom that we had not only survived, we had made donuts to boot.

…Not that she doubted we would survive. Truthfully, I think we were the ones who were doubting. But look, we made donuts!

Andrew made the dough all by himself, except for the kneading and punching down—he made me do that part because he hates getting his hands doughy. Rachel helped to roll it out and cut out the shapes—we used a Kool Aid container lid for the big circles and a baby bottle for the little circles and cookie cutters for the trees and stars. I made up some maple glaze. 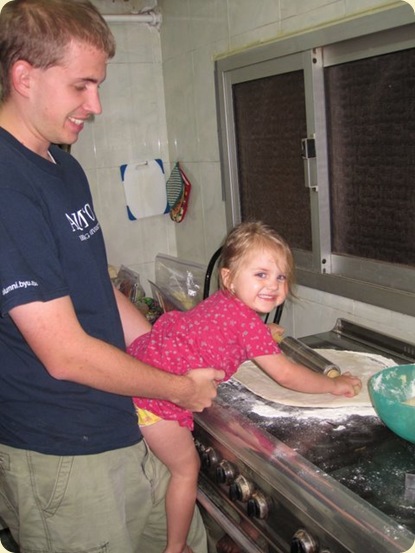 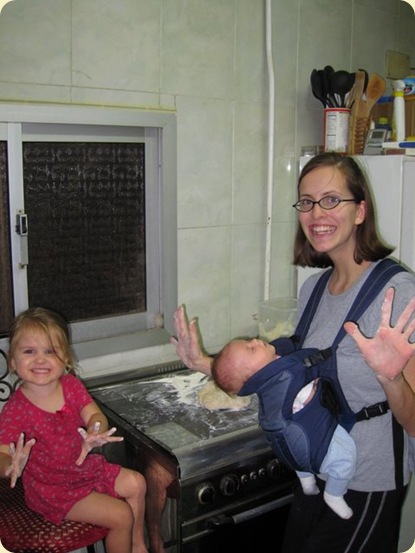 You have no idea how bummed we were when we realized we had forgotten to make any bar donuts because nothing beats a maple long john! Oh, well. 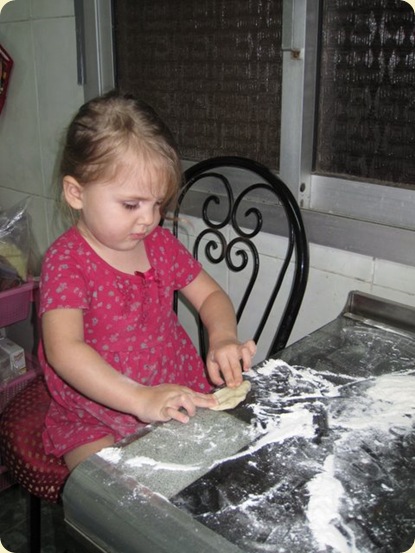 Rachel was thrilled enough with the o-shaped ones. We didn’t tell her those were the regular donut shape and let her joyfully think up o-words while she ate. Then we started suggesting other o-words and got to enjoy listening to her pronounce words like onomatopoeia, oregano, oxygen, obelisk, obfuscate, and orthodontist. That was fun.

Even more fun was listening to her try to say those words while her mouth was full of donut. 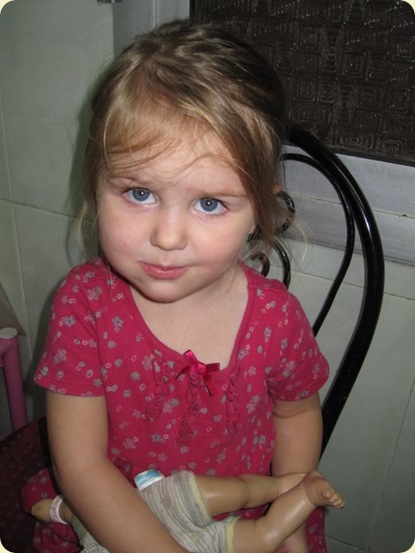 We ended up with a whole lotta donuts and I think we used almost every dish we owned in the process. 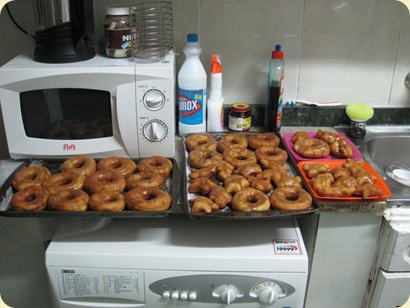 I took a dozen of them to the Relief Society Christmas Party this morning. Sister McCallister suggested that we auction them off instead of putting them on the dessert table (and, yes, we have dessert in the morning—we’re Mormons). All of the sisters donated either a service or a baked good (or a plate of bacon) and we all bid on them with Relief Society Cash we had earned by filling out a survey (asking us if we were wearing red, if we had sung a Christmas carol in the past week, if we had hugged our husbands that morning, if we had done our daily scripture study, etc).

I donated some ballroom dance lessons. And the donuts. I won French lessons, 3 nights of babysitting, and a bag of tortilla chips.

(And some Andes mints, which I had so sneakily planned to reserve for Andrew’s Christmas present because he loves them….so I hid them in the diaper bag…but didn’t notice there was a paper taped to the chips that said, “1 bag of chips and 1 package of mints” so Andrew found that and totally guessed the rest of the story.

I am so bad at lying.

I’m still giving them to him because can you get Andes mints in Egypt? No. So there is no way I’m wasting them on an ordinary day. They are soooo his Christmas present still, little snoop!)

Dan, Dan the Welsh Man (Simmone’s husband) acted as our auctioneer and he saved the donuts ‘til last. We all were a little strapped for “cash” at this point in the game so each side of the room was pooling their money to see who would win. Eventually we just called it a draw, opened the box, and passed them around the room.

Everyone thought they were divine, but I gave credit where credit was due and told the women that Andrew had made the donuts (although I did oversee the production since I have made donuts before). When he came to pick me and Miriam up to escort us to the doctor’s office, he wandered in to grab a cookie and everyone told him what an amazing job he did.

“Did you tell them to tell me that?” he asked.

I didn’t, so they must have actually been good. Perhaps we’ll make them again.

Andrew was supposed to meet me at the church to walk with me to the doctor’s office because we were due for some shots today and I didn’t want to take the girls in alone. But he was late. So I phoned him.

“Oh, no! I forgot and went downtown with Rachel instead!”

“What?!” I gasped in horror just as Sister Levanen walked by.

I hung up and Sister Levanen ran over to me.

“Is everything alright?” she asked, genuinely worried.

She told me Andrew owes me for that little prank. I happen to agree.