Our day started bright and early, at least for us. We loaded into the van at 8:00 AM to be taken across the Nile to the West Bank. Our driver was a happy, obliging fellow which meant that he cheerfully drove us to each destination we asked him to without pressuring us to hurry it up. Last time our driver was not so nice. 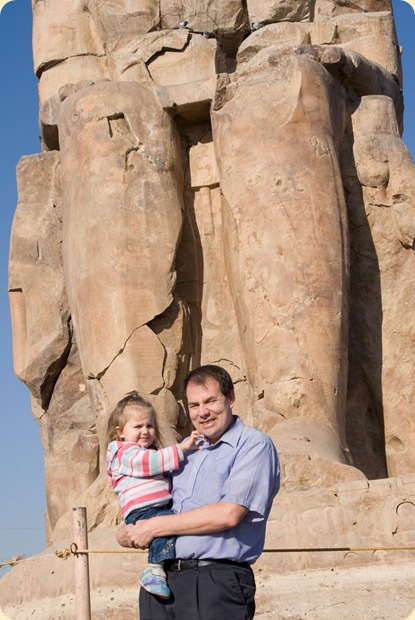 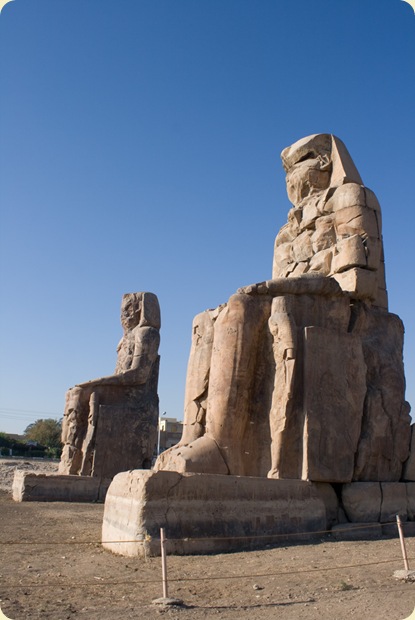 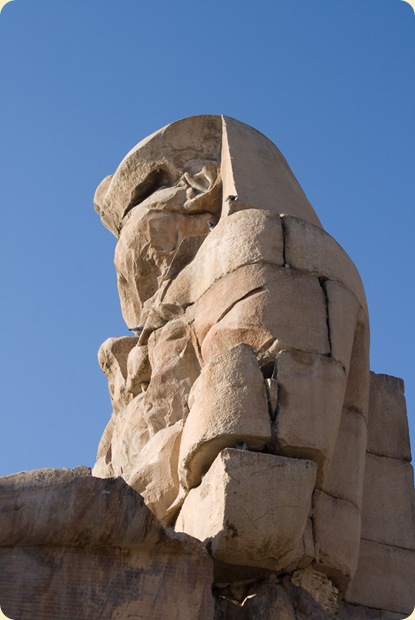 Our next stop was the Valley of the Kings. They’re getting more and more strict about allowing cameras into the complex. There are signs outside asking tourists to leave their cameras on the bus and if your camera is visible the guards will tell you to go back and leave it on your bus as there is a “1500 pound fee for having a camera anywhere inside.” However, the only rule is that you can’t take pictures inside the tombs themselves. You’re most definitely allowed to take pictures inside the gate.

Since our camera bag is obviously a camera bag we were turned away at the gate, but Karen sneaked her camera inside and snapped a few pictures of the valley.

As has become sort of a tradition, we headed to the tomb of Tuthmosis III, the one hidden in a ravine, accessible only by climbing a rickety steel staircase. The sarcophagus is still inside and the walls have some lovely coloured hieroglyphics.

We again tried to visit the tombs that Lonely Planet recommends (Amenhotep II and Horemheb), but they were closed. Again. So instead we visited the tomb of Tawosret/Sethnakht, another one we have been in twice before.

To break from tradition we decided to go down inside the tomb of Siptah. There were workers inside stabilizing the tomb, which was never quite finished. Still, the passageway down was covered with remarkably well-preserved hieroglyphics. It was interesting to see where they were working because we thought that they had perhaps removed the hieroglyphics to restore them while they stabilized the walls of the tomb, but then we noticed that there were faint hieroglyphics flesh with the plaster the workers were putting on. They must be covering up a whole lot of artwork. Oh, well. 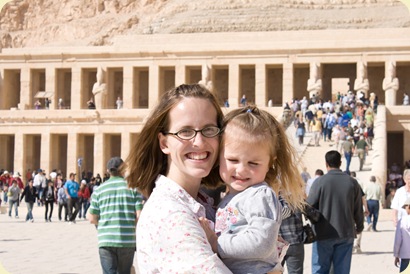 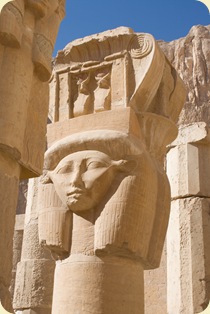 Next stop was the Deir al-Bahari Complex, better known as Queen Hatshepsut’s Temple. We went to the left of the main drag of the temple into the Chapel of Hathor, which we’ve never been in before. There is always more to these places than I think.

At one point Andrew put Rachel down on the ground and said, “Run, Dora, run! Corre, Dora, corre!”

We were laughing about that and called her Princess Dora for the rest of the day. 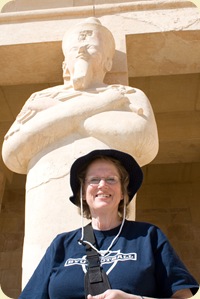 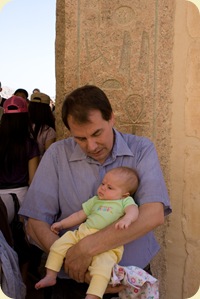 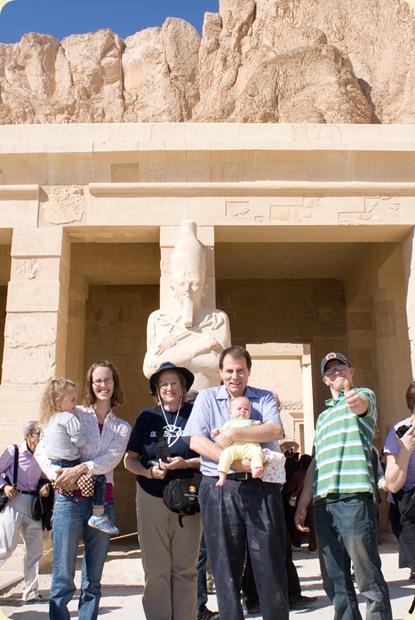 Andrew was excited for the next part of our tour. He’s been waiting to visit the Ramesseum for years. We tried to go when David came out but our driver refused to take us there; instead he pulled over on the side of the road and had Andrew take a picture from there. Our driver this time seemed excited that we were excited to go there and happily took us over. 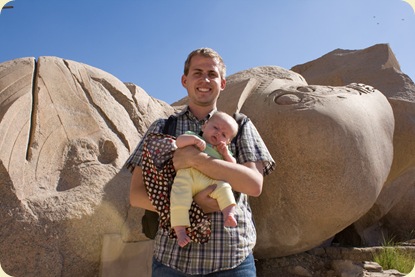 The bust of the statue that inspired Shelley’s poem Ozymandias still lies in a broken heap of concrete carnage. It would be a shame to put it back together since it would take away from the feeling of Shelley’s poem. Currently the temple is undergoing conservation but instead of reconstructing the monumental statue it was left where it was found. They even built supports around the torso to keep it stable in its fallen state. 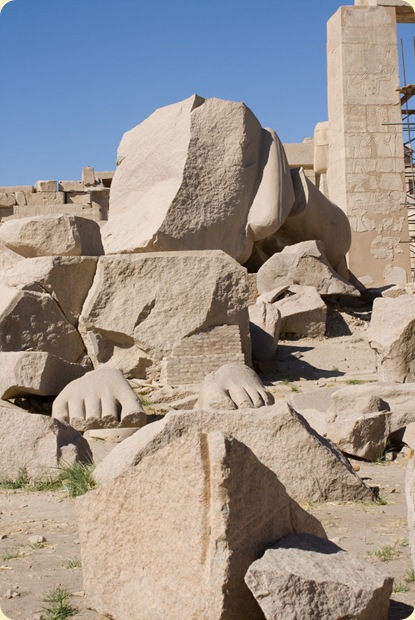 The inside of the temple is the typical layout of the other ancient Egyptian temples, with the pylons and hypostyle and so forth. 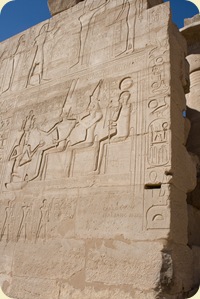 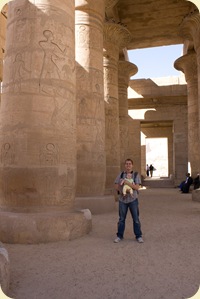 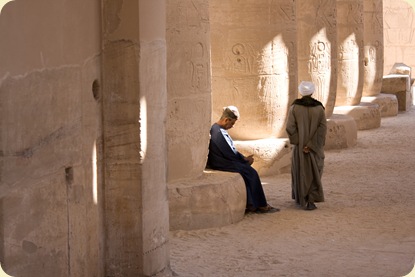 Everywhere we went we had to be on the lookout for pigeon droppings. Pigeons were perched virtually everywhere and the hypostyle hall was covered in smatterings of pigeon evidence. We were lucky we didn’t get bombarded with bird droppings, although when Rachel and Jacob were playing around one of the columns they both ended up with gobs of the stuff on their hands. 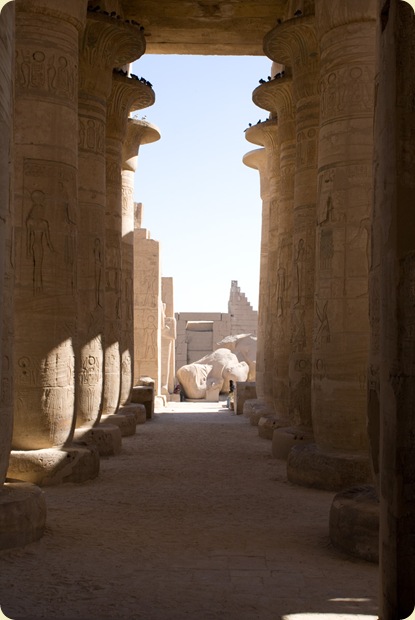 It used to be that when you visited these places you’d carve your name and the date you were there into the stone—today doing that is probably a crime and most likely carries a hefty fine with it. There are names of Greeks, British, French, and Italian adventurers everywhere you go. Sometimes if you’re lucky you can find your very own name, like Uncle Jacob. 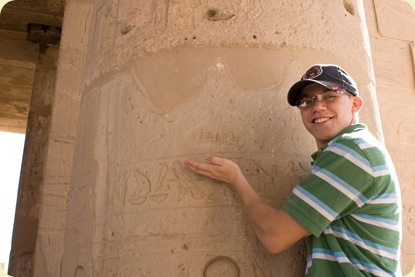 Grandpa taught Rachel how to be tall like a column—she’d climb up on all the column bases and stretch her arms high into the sky. Then she’d fall over like all the other columns around her had by jumping off the base and falling, ceremoniously, on the ground. 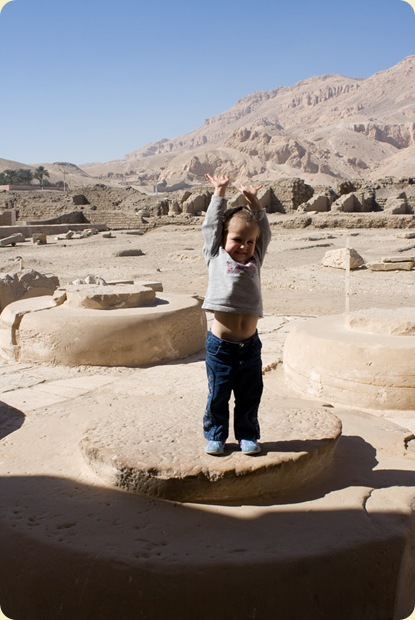 Miriam took a nap in a convenient little cubby hole that we found. Just kidding. We didn’t leave her in there too long since it was a rather long fall. We were making Grandpa nervous. 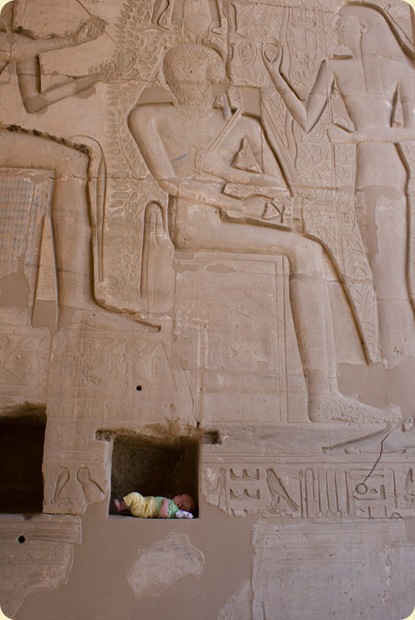 We pushed onto Medinat Habu, which was our favorite place last time we went to Luxor. It was still cool this time, but I was again shocked at how many birds there were. Perhaps since I’m the mother of a newborn I noticed them this time because I’m more concerned about how hygienic places are.

They also roped off a bunch of areas since the last time we were there. In my opinion, they needn’t worry about tourists touching the hieroglyphics if they are going to let pigeons poop all over them. I’m pretty sure the pooping is going to do more damage than a few little fingerprints.

In keeping with our tradition of placing our babies in dangerous and/or unhygienic places, we put Miriam into a little sarcophagus. 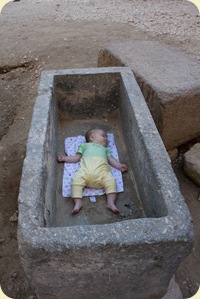 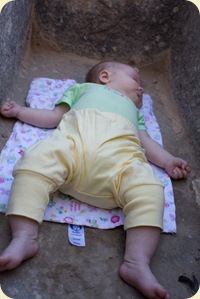 We told Rachel to climb up on a nearby rock to see what was inside the sarcophagus and when she did she immediately declared,

So we let her have a go as well. 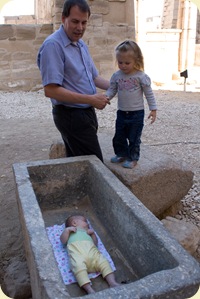 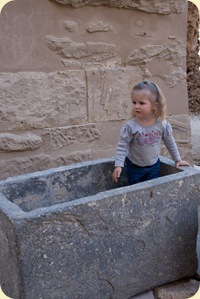 We wandered over to the Chapels of the God’s Wives of Amun and everyone looked inside each of the three rooms. The doorways are blocked off by little wooden gates, so to get a good look you have to lean a bit. Jacob thought the gates were secured to the doorway and leaned a little too far. The gate gave way and Jacob tumbled right into the room. He picked himself (and the gate) up in a hurry and walked away, very embarrassed. It was hilarious.

Truthfully I think we all thought the gates were somehow attached the the door but only Jacob was brave enough to actually lean against them. I suppose the rest of us have learned to not trust anything in Egypt with your life—most especially a rickety gate propped up against an open doorway.

For the rest of the trip we asked Jacob to lean against any sort of door or gate that blocked our way since he showed such aptitude at busting through them. 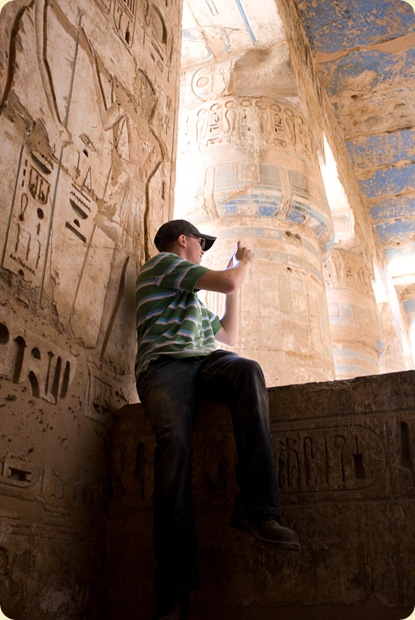 Everyone was impressed with the carvings on the outside of the first pylon, but even more so with the carvings inside. They are cut in so deep that it would be an honest mistake to think it was an ancient rock climbing facility rather than a temple. 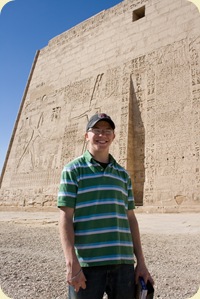 We were still blown away with all the colours on the walls and ceilings: bright blues, deep reds, vibrant yellows. Despite the pigeons and weathering the paint has lasted thousands of years. 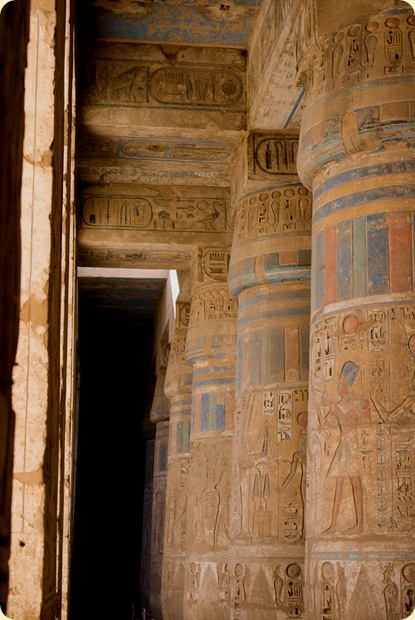 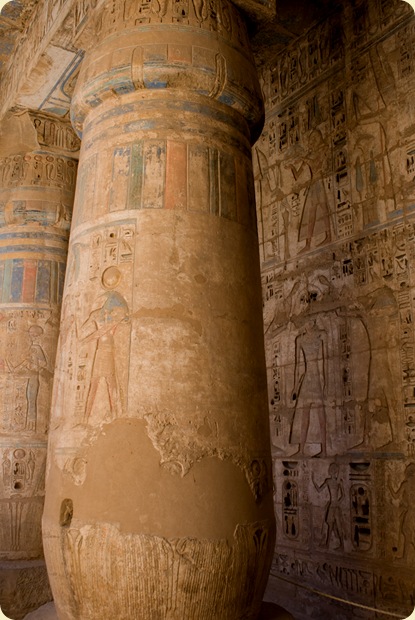 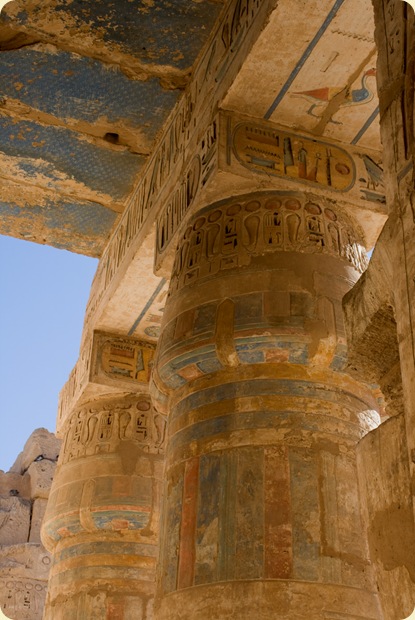 Rachel found a little dip in a wall and decided it was her potty. She pretended to go and then pretended to wash her hands in the hollow beside her. She didn’t want to leave her potty to explore the rest of the temple. 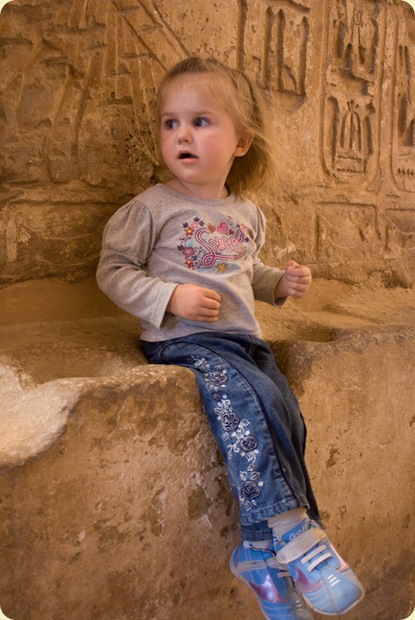 In the very back in the hypostyle hall, Rachel got up on a wall and wouldn’t come down. She is getting very, very good at refusing to do things—it’s a good thing we’re almost finished with the terrible twos. I can’t wait for some willing obedience again—just a smidgen would be nice so that we don’t have to coax and/or bribe and/or threaten her to do any and everything. 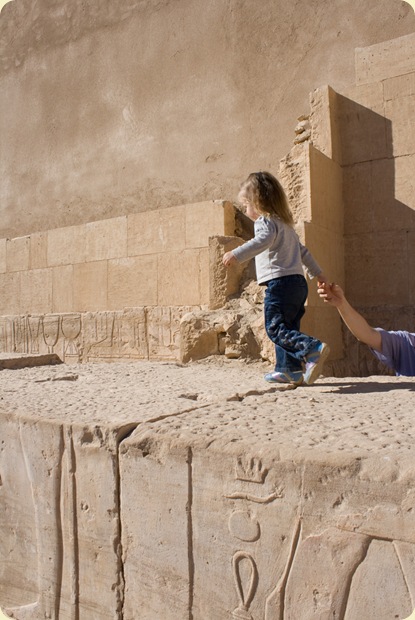 We got back to the East Bank in the late afternoon and then I can’t quite remember what we did. Probably we took a well-deserved nap. Later we probably went out for dinner and walked in front of the Luxor Temple, which is beautiful all lit up at nighttime. It was a long day, that’s for sure!