There were two on the bed and the little one said…

I put Miriam down on the bed while I was getting dressed today. She should have been perfectly safe—she was a foot away from the edge of the bed, resting against the footboard,* kind of like this: 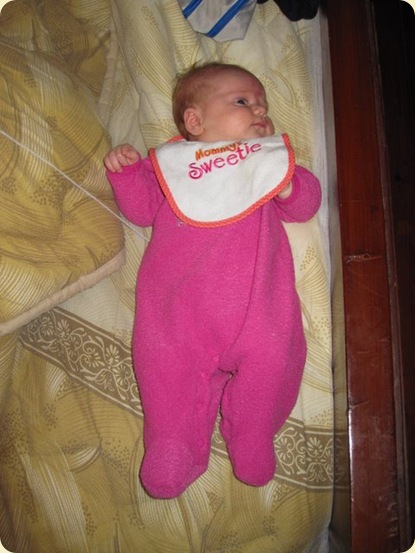 There was no real way for her to roll off the bed since she had the whole bed to her right and the footboard to her left and it would take some major scooching to fall off the side of the bed. Since I was going to be watching her while getting dressed I would have noticed her inching her way to peril and saved her.

So she was fine on the bed, and perfectly safe.

What I hadn’t counted on was Rachel entering the scene.

Rachel has been a model big sister. She adapted to the role much faster than I ever expected and, although she still struggles with the concept of soft, is gentle with and protective of Miriam. She always runs to see what the matter is when Miriam starts fussing and will  inform me that “Miriam is having a hard time” or that “You need to feed her to make her happy.”

She’s a very caring sister, but a little too hands-on.

Armed with that knowledge I should have, in retrospect, intervened when I saw Rachel approach the bed, but I didn’t. Instead I continued to sift through my shirts, trying to find one that fits my post-pregnancy proportions,** while keeping a peripheral watch on the girls.

With one swift, solid tug to her legs Miriam went sailing off of the bed. I whirled around. Rachel’s mouth dropped open. Miriam landed on the floor—the cold, unforgiving, hardwood floor. It was sickening to watch.

Shaking, I stooped to pick up my screaming baby.

“I just wanted to hold her!” Rachel stammered, before fleeing from my bedroom and into Grandma’s arms.

What part of her thought that was a good idea when there is a solid rule about needing adult assistance to hold he baby?

Probably the same part that thought it would be a good idea to purposely pee on the bathroom floor (and laugh about it saying, “I just peed on the floor instead of my potty”) after I had excused an I-waited-too-long-and-peed-my-pants-two-steps-away-from-the-potty accident earlier that morning.

Still shaking, I did my best to comfort Miriam, who was screaming wildly with a definite “I’m hurt” cry and clutching my shirt with both hands, while I watched an ugly red welt appear on the side of her head.

Rachel was busy cheering herself up by goofing around on Grandma’s bed…but she tripped over a pillow and ended up smacking her head on the headboard, sending her, also, into tears.

Everything is going to be okay, though. I realized this after watching myself react to Rachel’s head bonk like it was no big deal. Just one more bruise, no big deal, suck it up.

I did not react like that with Rachel’s first head bonk and I didn’t react that way with Miriam’s head bonk today. But children are resilient (and can apparently run into the back of the couch two-thousand times without causing brain damage). Surely they can sail off the bed and land on their heads without causing any permanent problem also.

** Holy hand grenade, I’m huge! I can’t find a bra that fits. It’s an impossible task. 32 F is my closest fit but the band is too big and the cups too small. How is that even possible?