You’re not the boss of me now!

Lately Rachel has been on this bossy kick. A few weeks ago Andrew asked her to do something and she looked up at him and said,

To prove just how boss-like Andrew is, we sent her to her bedroom.

Since then she has been determined to find something that she is the boss of, which is difficult considering a) she’s two and b) she only wants to be in charge of things like bedtime or when we should eat dessert or who should hold baby Miriam. 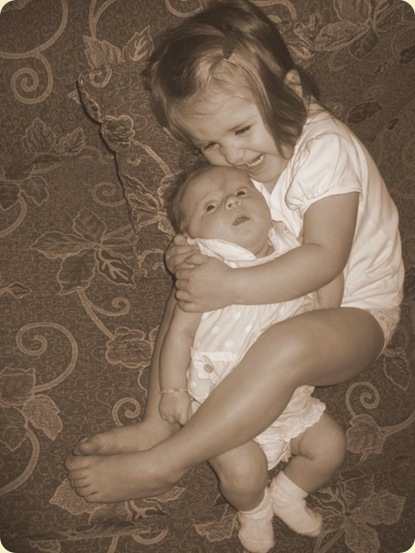 Today we were walking home from the doctor’s office and Rachel was chattering away in the stroller. We couldn’t really hear what she was saying since she insists on having the sunshade pulled over her all the time, so I peeled that back and we asked her what she was talking about.

Mostly that is true since she is usually the first one up, and if she happens to not be the first one up she proves herself incredibly difficult to wake up. So she really is in charge of that…still, she had us in stitches with how adamant she was about it.

Tonight at dinner she said something silly and we both started laughing at her.

“Hey! Stop laughing!” she commanded, “I’m in charge of laughing! Not you!”

For the rest of the meal she would laugh with us whenever we started laughing and then fall serious and remind us that she was in charge of laughing, so we needed to stop.

If we dare not follow her very bidding when she thinks she’s in charge she lectures us. This morning she was refusing to do something and Andrew was telling her that she had to do it, anyway.

“You’re fighting me!” she screamed, “I don’t like that because I’m the boss!”

Sometimes I feel like she takes every phrase I’ve ever said, twists my wording and then turns around and uses it on me…