Besides just looking at old documents, one of my goals in coming to Rome for this research trip was to talk to a few of the (very small number of) academics who know anything about Italians in Egypt. Few very Italian scholars have tackled the subject—none have done it in English.

One professor, Anna Baldinetti, wrote one of the keystones for my thesis, Orientalism e colonialismo, but teaches and lives in Perugia. I’ve been in contact with her via e-mail for the past couple months and had planned taking a day trip up north to visit and talk with her. The day before I left for Italy she e-mailed to say that she’d be doing her own research in Rome at the same time I would be. Perfect timing, no? I called her yesterday and arranged to meet her at the Archivio Centrale dello Stato, the main government archives in EUR, a southern suburb. After a quick breakfast of orzo and a creme-filled cornetto, I jumped on the metro and took the long ride to the penultimate stop. 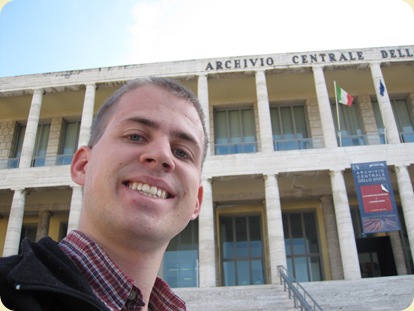 The archives are housed in a large fascist-era building a short walk from the metro station. Getting in was easy—I left my passport at the front desk and got a visitors pass with a key for a locker. When I got to the cloakroom to drop my stuff off in the locker, there was one other person there locking her stuff up—a blonde Italian lady. We acknowledged each other with a quick smile, but we both went back to getting our stuff ready for the archives. Like the National Library, you can’t bring bags (even those for laptops) into the state archives—you have to carry everything out in the open.

I finished first and started out the door. On my way out I noticed that some of her papers mentioned Tunisia and I immediately wondered if she was Dr. Baldinetti. Rather than ask her in person, I walked out into the hallway, pulled out my phone, and called. I watched her take out her ringing phone. It was her.

We went up to the consultation hall where I filled out a couple applications and talked with the archive director. Dr. Baldinetti then gave me a quick rundown of the document collection that would be most useful for me—the archives of the Presidenza Consiglio Ministro (PCM), or the Prime Minister’s documents. After talking a while longer about other potential sources, she headed into the reading hall to look at the documents she had requested, leaving me with the PCM indices.

The indices are huge. Really huge. Each year is bound in a book that’s like 1.5′ x 3′. Everything is handwritten and was probably updated 2–3 times a year, so it’s not entirely alphabetized: “egitto” showed up as a category twice in the 1911 index. I skimmed through all the PCM indexes I could and wrote down a ton of references to the exact envelopes and subenvelopes that looked interesting.

I then went to the front desk to fill out the request forms, only to discover that you can only order two envelopes at a time and that you can only make two requests per day: one before 9:40 AM and the other before 12:40 PM. They bring the envelopes to a special shelf that’s assigned to you for six days, but you can only ever have four envelopes on the shelf at a time.

Unfortunately, the documents I found were scattered between 7 envelopes. I had to whittle it down to 4, guessing which ones would be most important—kind of a difficult task when you have no idea what the documents actually say. After lots of deliberation and debate, I made my two requests for the afternoon order and preordered two for the next morning. I couldn’t do anything else—no documents would be ready until tomorrow—so I left.

I then called the foreign ministry to check to see if my clearance from the embassy had finally gone through… and it had! As is the case with everything here, the foreign ministry archives closed early—at 2 PM. I left the state archives, way down in EUR, at 12:30. Yikes. I rushed up there (north of the Vatican, next to the Olympic stadium) as fast as I could, pulling out my trusty public transportation PDF to plan the fastest route, and miraculously made it there by 1.

Getting in was tricky. The archives are inside the actual foreign ministry building, so I had to go through heavy security and get several papers stamped. Even after all that, the security guard still wouldn’t let me in, saying that he didn’t believe that I was really trying to do research. Living in Egypt has conditioned me for arbitrary rule enforcement—I whipped out my cell phone, called the archives, and told them to tell the front desk to let me in. It worked.

The foreign ministry archives are a lot smaller than either the National Library or the state archives. There were only 5–6 other people doing research and 5 librarians. After welcoming me warmly, the head library handed me a stack of indices that she had already. She already went ahead and found everything related to my research. Incredible!

Before ushering me into the reading room to make my envelope choices, she warned me that I probably wouldn’t be able to get any documents until February. As it turns out, the one person who has clearance to go into the stacks and retrieve the envelopes got sick that morning and would be out for a week or two.

The foreign ministry archives are the main point of my research—the main reason I came all the way out to Rome. The National Library, state archives, and Istituto per l’Oriente are all secondary to the stuff I want to see at the foreign ministry. That’s why I trudged up to the embassy with my suitcase immediately after landing on Tuesday, before doing anything else. I need to see those archives. If I don’t get into those archives, I don’t know what I’ll do… that’s the last big item on my list. If I can’t get in I’ll have to wander around Rome for a couple days, wishing I could go home to my family in Egypt. Ugh.

I told her that I’d be flying back to Cairo on Tuesday and that I really, really, really wanted to see something. She seemed really concerned about my plight and told me she’d try to figure out some way to get the documents.

I quickly browsed the indices (regular-sized books this time…) and found a couple dozen documents that looked potentially useful. The director had me fill out the regular request forms for 4 envelopes. Like the state archives, I could only order 2 envelopes per day and I came too late to get anything for tomorrow, so inshallah I’ll see everything next Monday and Tuesday. Awesomely enough, the documents I wanted were in 4 envelopes, so I didn’t have to pick and choose like I did earlier this morning.

On my way out the director assured me again that she’d try to do everything possible to get the documents out, but I was hardly comforted. While I was checking the indices, she went around to each person working in the reading room to tell them that they should just come back in February—not a very heartening sign. She told me to call early tomorrow afternoon to hear the verdict.

I left the foreign ministry both elated and crushed. I found some fantastic potential sources but I have no idea if I’ll ever even be able to look at them.

To take my mind off this looming defeat and huge disappointment, I decided to go back to the Vatican, since I couldn’t get into St. Peter’s last night. After a quick lunch of Döner kebab (not pizza, again!), I went in the massive church.

I’ve been to the Vatican and in St. Peter’s countless times as a missionary—I even had a special Mormon-Catholic diner party with some American monks at the Vatican. The church is still just as majestic, ornate, and austere as ever. 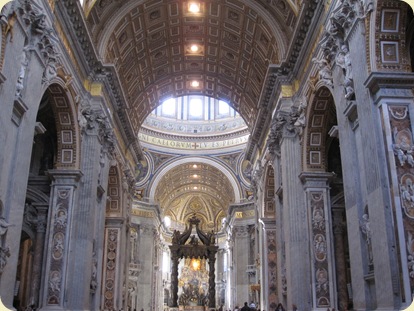 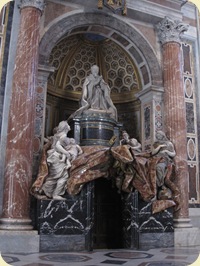 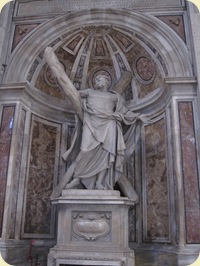 It wasn’t too crowded, probably since it was a freezing cold January afternoon. Normally La Pietà is too crowded to get up close. Not this time. 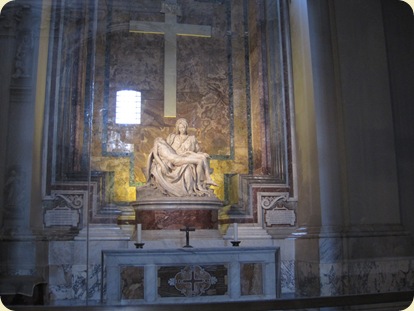 The light streamed in from the tall stained glass windows, making for some beautiful photos. 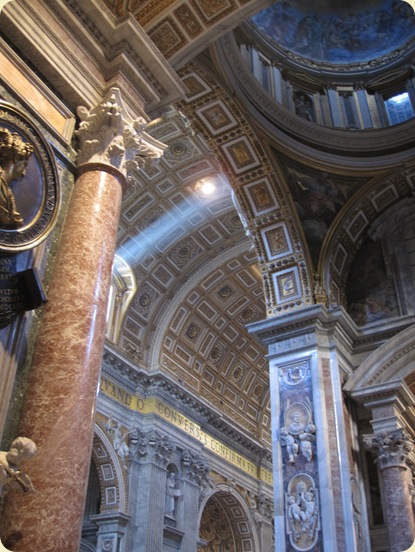 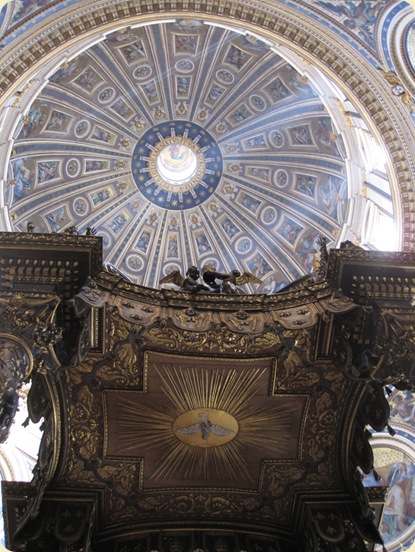 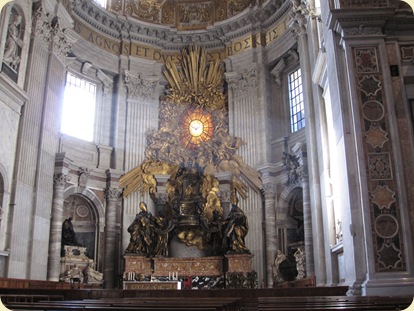 I even got my Catholic on and went and rubbed St. Peter’s foot. 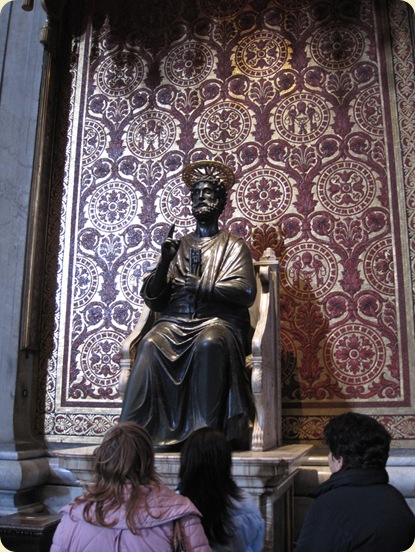 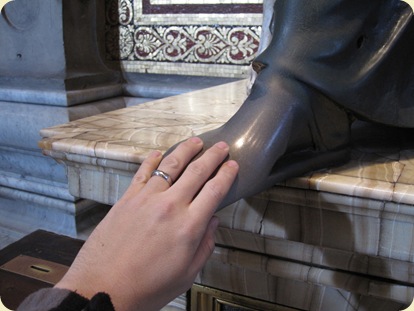 After leaving the church I spent a few minutes sitting in the main piazza, admiring the architecture and praying that I’d be able to get into the archives. 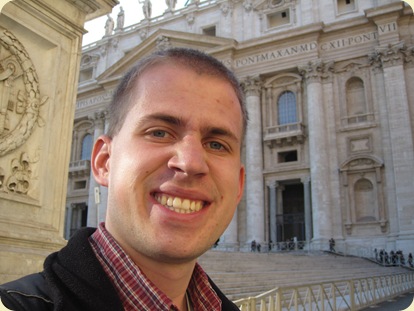 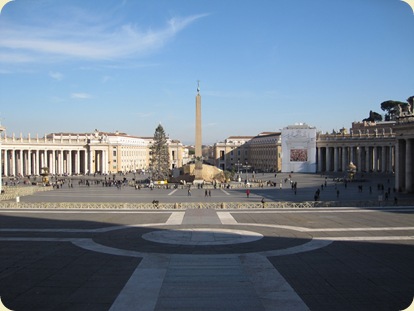 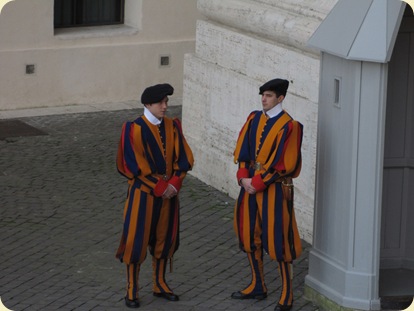 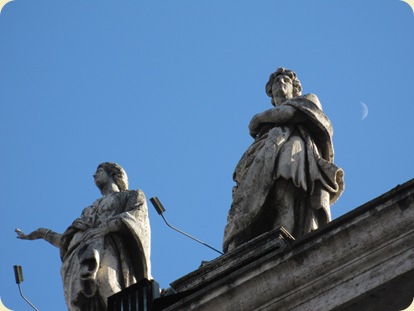 On my way back to the metro station I stopped at one of the best gelaterie in Rome—Old Bridge. It’s cheap and heavenly delicious… what could be better?! 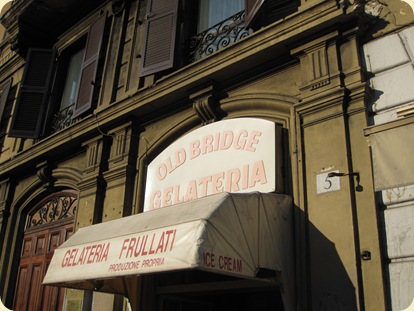 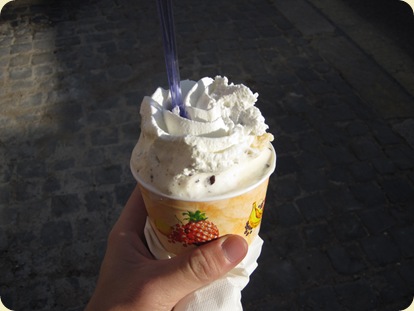 And with that, I went back to the hostel to cloister myself in my once again vacant room. Paying €11 for a private hostel room rocks. I totally hope I’m done with roommates here.

And I totally hope I can get into the archives!