Like Rachel, Miriam was born with some stork bites—salmon coloured birth marks—on her face and the back of her neck. Over time the marks  fade away, except, apparently, for the ones on the back of the neck (sorry, girls). Rachel’s stork bites were mainly on her eyelids and although they are mostly gone you can still see a bit of what’s leftover in her eyebrows.

Here’s Rachel at around 2.5 months, with lots of hair and bright red eyelids: 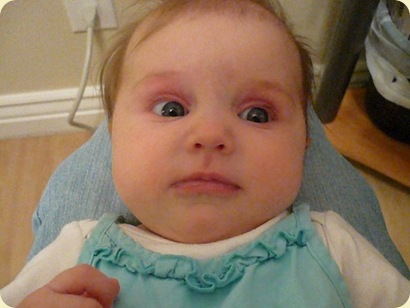 Miriam’s eyes are free of stork bites but she has a nice big mark right in the middle of her forehead. Here she is today, at around 2.5 months, showing off her stork bite for you: 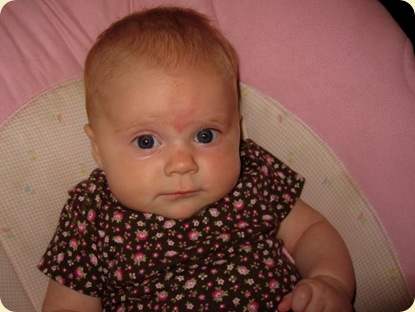 Several people here have noticed its colour and placement and have made remarks like,

“Has Miriam been praying too much?”

or “How funny she has a birth mark there!” 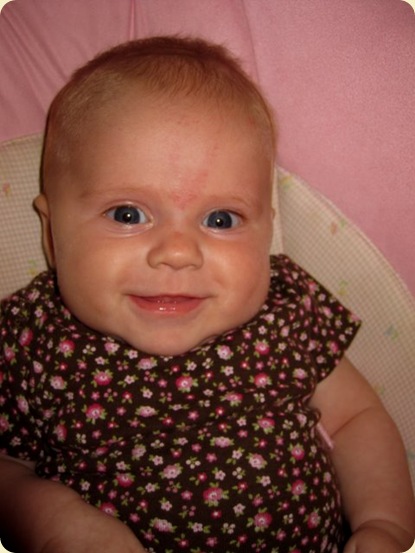 Then, as if they were afraid they came off as rude or just in case I wasn’t sure why they were laughing at my baby, the commenter will usually timidly add,

“Well, it kind of looks like a prayer raisin, don’t you think?”

Zabiba means ‘raisin’ in Arabic (زبيبة) and it is also used to describe the bump, bruise, or callus found on one’s forehead purportedly caused by praying prostrate on the ground. It’s quite common, here in Egypt, to see men walking around with a largish, purplish, circular bruise in the middle of their forehead: their zabiba, or ‘prayer raisin.’ And while some people seem to honestly believe zabiba to be a by-product of prayer, I remain skeptical.

I once asked my friend Phyllis about it and she said,

“Oh, I don’t know that it’s caused by praying. My husband prays five times a day and he doesn’t have one!”

Furthermore, Egyptian males seem to be the main population effected by such a thing, and to be honest I don’t recall seeing much of it when we lived in Jordan, although we certainly noticed it when we came down to visit Egypt in 2006.

Whatever the case, it’s quite ironic that Miriam should have a birthmark on her forehead while living in Egypt. It’s certainly a conversation piece…